US Sanctions Daniel Ortega’s Son for Corruption and Money Laundering 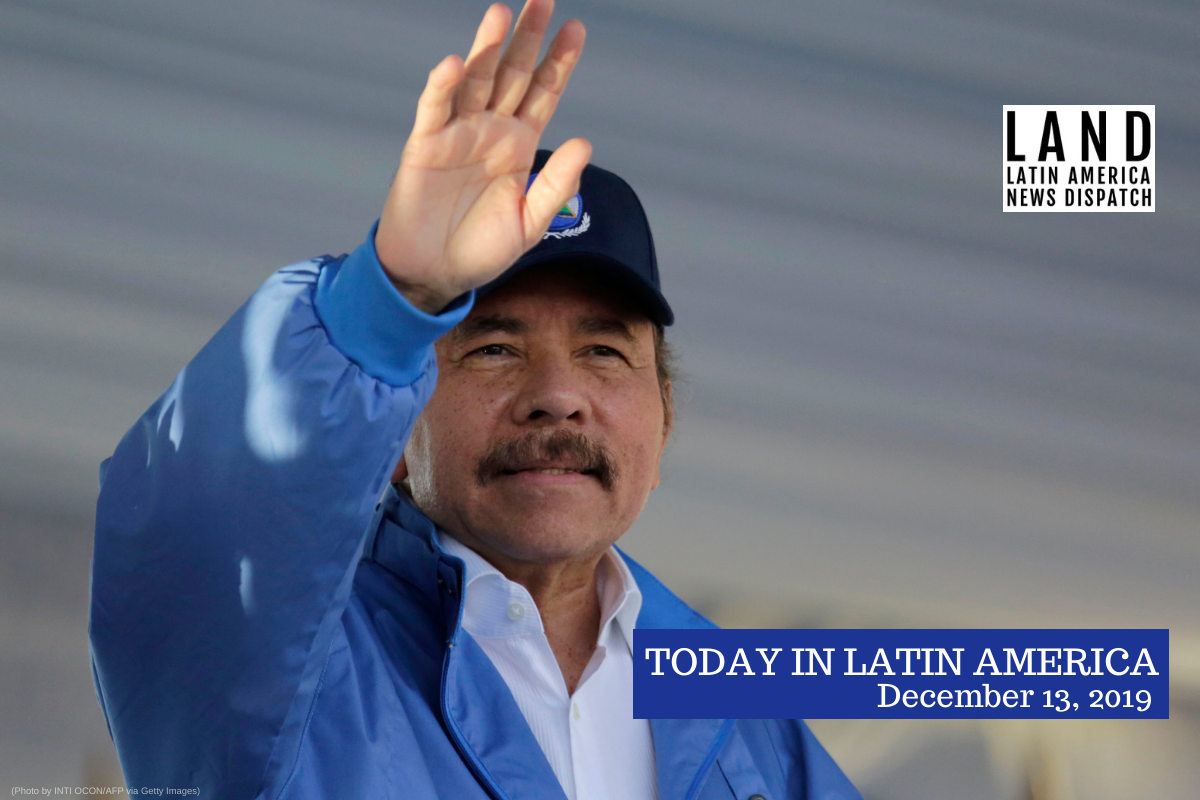 The U.S. Department of the Treasury’s Office of Foreign Assets Control accused Rafael Ortega Murillo of using two of the companies to send money to his mother, Vice President Rosario Murillo, who is currently under U.S. sanctions for corruption and human rights abuses. DNP Petronic, a publicly purchased company, has been used to funnel money into the Ortega family through non-competitive Nicaraguan contracts. “The Treasury is targeting Rafael and the companies he owns and uses to launder money to prop up the Ortega regime at the expense of the Nicaraguan people,” said Treasury Secretary Steven T. Mnuchin.

CHILE: Rescue workers found human remains and debris of the military transport plane that vanished en route to the Antarctic last Monday. Chilean Air Force chief Arturo Merino said that the 38 people aboard the plane died in the accident. The C-130 Hercules aircraft departed on Monday from Punta Arenas in southern Chile and 70 minutes later, the plane lost signal while it flew over Drake Passage, a sea passage between South America and Antarctica, widely known for its extreme and unpredictable weather conditions, the AP reported.

ARGENTINA: The National Chamber of Criminal Appeals has ordered an investigation into the death of Santiago Maldonado to be kept open. Maldonado was an activist who disappeared in 2017 after participating in a protest in southern Argentina. His body was found two months later without signs of violence, reported La Nación. According to the Buenos Aires Times, accusations against the involvement of government security forces in the alleged “forced disappearance” arose from the outset, since the last time the 28-year-old was seen was before the Argentine gendarmerie violently dissolved the protests in the province of Chubut. In 2018, judge closed the case and denied any kind of disappearance, a decision criticized  by Maldonado’s family and human rights organizations such as Amnesty International. A new judge now has to investigate whether Maldonado was taken illegally, according to Página 12.

COLOMBIA: Complaints of police brutality in protests to raise the minimum wage continue after police forced a woman into an unmarked car on Tuesday, according to a video shared on Twitter. The woman, whose identity is still unknown, took part in the anti-government protests against the government of Iván Duque earlier that day. A couple recorded a video of the moment when police agents from the Mobile Anti-Disturbances Squadron forced the protester into a black Chevrolet sedan and drove her around the city to release her in the middle of a traffic jam, according to The Guardian. Bogotá police chief Hoover Penilla said that the act was legal and asked journalists to stop questioning “everything police officers are doing,” reported Colombia Reports.

DOMINICAN REPUBLIC: The Dominican Navy reported that it detained more than 3,000 unauthorized travelers attempting to travel to Puerto Rico in the last year and uncovered 12 illegal trafficking groups, according to El Nacional. During the period between August 2018 and December 2019, the navy arrested 100 people involved in illegal trafficking operations that were attempting to move thousands of Dominicans and foreigners out of the country. The navy and migration authorities said many of the foreign travelers had entered the country as tourists and then paid traffickers to ferry them to Puerto Rico.

PANAMA: Venezuelan migrants with expired passports will still receive government provisions, according to a government decree signed by President Laurentino Cortizo yesterday, La Prensa reported. Decree No. 1316 allows expired passports to be used as valid identification during immigration and employment proceedings for up to two years. Similar laws have been implemented in the United States, Canada and Colombia following the mass emigration of at least 4.5 million Venezuelans due to political unrest. According to official estimates, at least 95,000 Venezuelans have settled in Panama, the most of any other Central American country.

MEXICO: The state of Hidalgo rejected the legalization of abortion yesterday in a vote in Congress. Mexico is slowly moving toward legalizing abortion, but as of now it is only legal in parts of Mexico, and not at the federal level. Oaxaca joined Mexico City in September when the state legislature decriminalized abortion in the first trimester. Across the country, abortion is legal in cases of rape.

UNITED STATES: Lawyers in the United States have asked a judge to dismiss an immigration lawsuit filed by New Mexico against the Trump administration in June. The state claimed in the lawsuit that immigration officials released thousands of Central American migrants into communities without providing resources or funding for temporary shelter and other basic needs. The lawsuit blames the abandonment of the “safe release” policy, which the Trump administration ended in October 2018. The policy had provided assistance to asylum seekers, including transportation and help finding sponsors, as they awaited their hearings. U.S. District Judge James Browning heard arguments in the lawsuit Wednesday, but the case likely won’t settle for awhile due to a backlog of cases, he said.