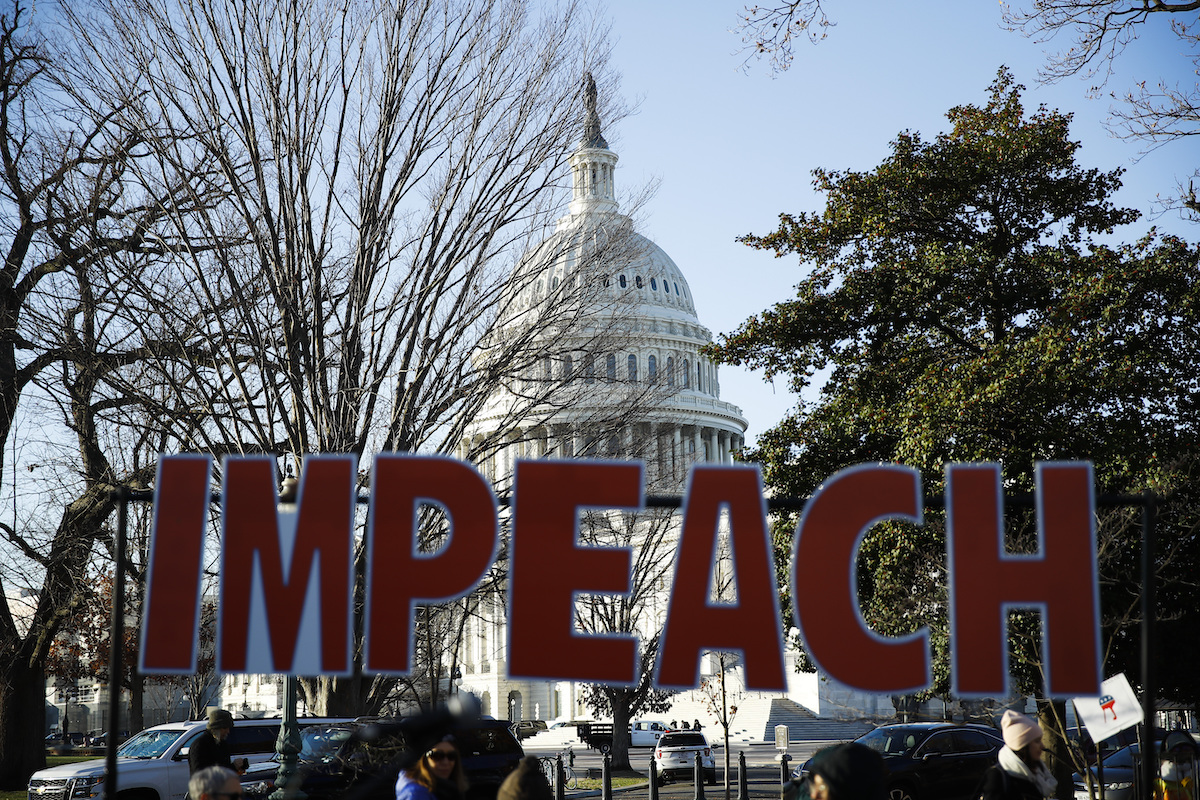 Protesters demonstrate as the House of Representatives begins debate on the articles of impeachment against President Donald Trump at the U.S. Capitol building, Wednesday, December 18, 2019, on Capitol Hill in Washington. (AP Photo/Matt Rourke)

It’s Christmastime once again, which means I won’t be reading any news for the next two weeks. And since Donald Trump just became the third president to be impeached —Bill Clinton in ’98, during the same week in December, in fact; and that racist ass-pimple Andrew Johnson back in 1868— and since I rarely write about the Trump circus, and considering most of you will probably say or hear something about the Trump circus sometime during the next couple weeks, I thought I’d add my two cents, which are at least as valuable as any idiot’s you’ll hear.

First off, I’m not a Democrat or a Republican. I didn’t like the Obama administration that much, I liked the Hillary campaign way less, and I like the Trump presidency least of all, but I don’t think Trump’s some evil genius or the Boogeyman. I think they’re all crooked as a fighter’s nose, the whole damned monied Establishment, which —don’t be fooled!— Trump himself is a part of, and has been for a long time. You can’t show me a picture of the Clintons laughing with Trump and Melania at their wedding in 2005, or Trump schmoozing with Oprah, and then tell me Trump is an outsider. C’mon, bruh. I was born at night, but not last night. Trump isn’t draining any swamp—he’s the Swamp Thing himself.

Second, as you’ve probably noticed by now, impeachment does not mean “removal from office.” The President was formally impeached by the House of Representatives on Wednesday, but he’s still kicking up his feet in the Oval Office today. What impeachment means is that the case now goes to the Senate, where House members will act as prosecutors, the Senators will act as jurors, and Chief Justice Roberts will sit as the judge.

The House members will present their case, centered on two articles of impeachment: 1) that, by threatening to withhold military aid to Ukraine unless the Ukrainian government investigated the Ukrainian dealings of Hunter Biden, the son of his political rival in the upcoming election, as well as postponing an important White House meeting with Ukrainian officials until Ukraine agreed to at least publicly announce it was opening its investigation, “Trump used the powers of the presidency in a manner that compromised the national security of the United States and undermined the integrity of the United States democratic process”; and 2) that, by ordering members of the Executive Branch not to comply with Congressional subpoenas tied to the impeachment inquiry, the President obstructed Congress.

In layman’s terms, Trump used his public office for personal gain: the President dangled publicly funded aid as a bribe to get a foreign government to influence a U.S. election by announcing an investigation into the son of his political rival. Then he tried to thwart Congress’s investigation into what he had done. Pretty textbook Banana Republic-type shit—and that’s coming from a Honduran American.

The Senate will listen to witnesses, brought by the House of Representatives on one side and the White House on the other. Then the Senators will deliberate in private, as juries do, and since a two-thirds supermajority in the Senate is needed to convict a president, and the current Senate is controlled by a majority of members from the President’s sycophantic party, the Senate will almost definitely find him not guilty of the charges.

Sidebar: An old conservative buddy of mine laid out why he, and presumably Republican voters, think the impeachment is purely politically motivated and founded on no substantial violation of the Constitution. Basically he says that the President’s request that the Ukrainian government investigate Hunter Biden’s dealings in Ukrainian had nothing to do with the upcoming election, since it’s Hunter’s dad Joe who is running for president, not Hunter himself. President Trump should even be applauded, says this friend, for trying to clear up any corruption in a country we’re giving aid to. Never mind the President’s journalist-murdering pal in Saudi Arabia, I guess. Or his election-rigging pal in Turkey. Or his pal Putin in Russia.

Sorry, bud, but either you’re naïve or you think I am. Hunter Biden is not merely the son of some political rival. Ever since he decided to run, and especially back in the summer when these negotiations took place between the Trump White House and the Ukrainian government, Joe Biden had been the clear front-runner for the Democratic presidential nomination, the heir apparent—what Hillary was in 2015. And even the President’s own men have said there was a quid pro quo, a “this for that,” and the President only wanted Ukraine to announce an investigation into Joe’s son, knowing the mere shadow of any shadiness would hurt the Biden campaign.

Funny enough, while I think that Russiagate stuff was a lot of smoke, this whole business of asking a foreign government to dig up dirt on an election rival —and dirt on a rival’s son is dirt on the rival— is pretty much what Trump has been accused of doing with Russia in 2016.

“Stupid is what stupid does.”

Maybe the President just couldn’t help himself. Having studied a lot of corruption in the last 12 or so years, I find that the corrupt always stick to the same playbook, reiterating the same lies and carrying out the same schemes. The corrupt aren’t very clever; they’re just single-minded in their pursuits. And if it’s broke already, don’t try to find new ways of breaking it.

Or maybe the President never worked with Russia in 2016 at all, but maybe he thought he would try to do what the Democrats were already accusing him of doing. Like when your girlfriend or wife is constantly accusing you of being unfaithful: Fuck it, if you’re going to catch heat anyway, better to beg for forgiveness for something you’ve done than to take the blame for something you haven’t done. I don’t necessarily agree with that way of thinking, but I understand its appeal.

Still, as I said to begin with, I’m no Democrat or Republican, so I’m not rooting for the Democrats. I’m rooting for the Constitution. I think what Trump did is impeachable —the Founders would’ve hung him from the tallest oak tree they could find, and then went to lunch— but the Democrats are no saints, either. For all their cant about defending the Constitution, it’s really just about power, naked, ugly, and dripping wet. The Democrats want to win the next election. They want a Democrat in the White House, and Democrats in control of the Senate, so they can go back to what they did during the first two years of the Obama presidency: preaching “hope and change” while forking over any and all loose change to Wall Street.

The Democratic and Republican parties are two sides of the same dirty coin (the “two right wings” of “the Property Party,” in Vidal’s words). The only goals they really stand for are money and war, and they’ll keep making the same empty promises to their respective bases just to keep the money-and-war machine they both work for running as smooth as possible.

Hillary ran on “I’m not Trump” in 2016, and it looks like the Democratic Party wants to run on “help us stop Trump” in 2020. Under a two-party, winner-takes-all system, which works on the lesser of two evils “principle,” a party need only show they’re not as bad as the other in order to win. We might’ve fucked you over in the past, reads the 2020 Democratic manifesto, but we won’t fuck you over as bad as the Republicans have and will. Meanwhile, the voters are like a whore torn between two pimps.

President Trump will remain in office, and the Democrats will run on the fact that they tried to kick him out—plus promises that each voter has the right to express his or her or its or their identity however he/she/it/they want. Whether each voter also has the right to decent health care, or a good-paying job, or a solid debt-free education, or decent housing —you know, the basic stuff that government exists to provide its citizens to begin with— is something the Democrats will leave to the corporations to take care of.

And round and round we’ll go…

One response to “A Very Trump Christmas (OPINION)”