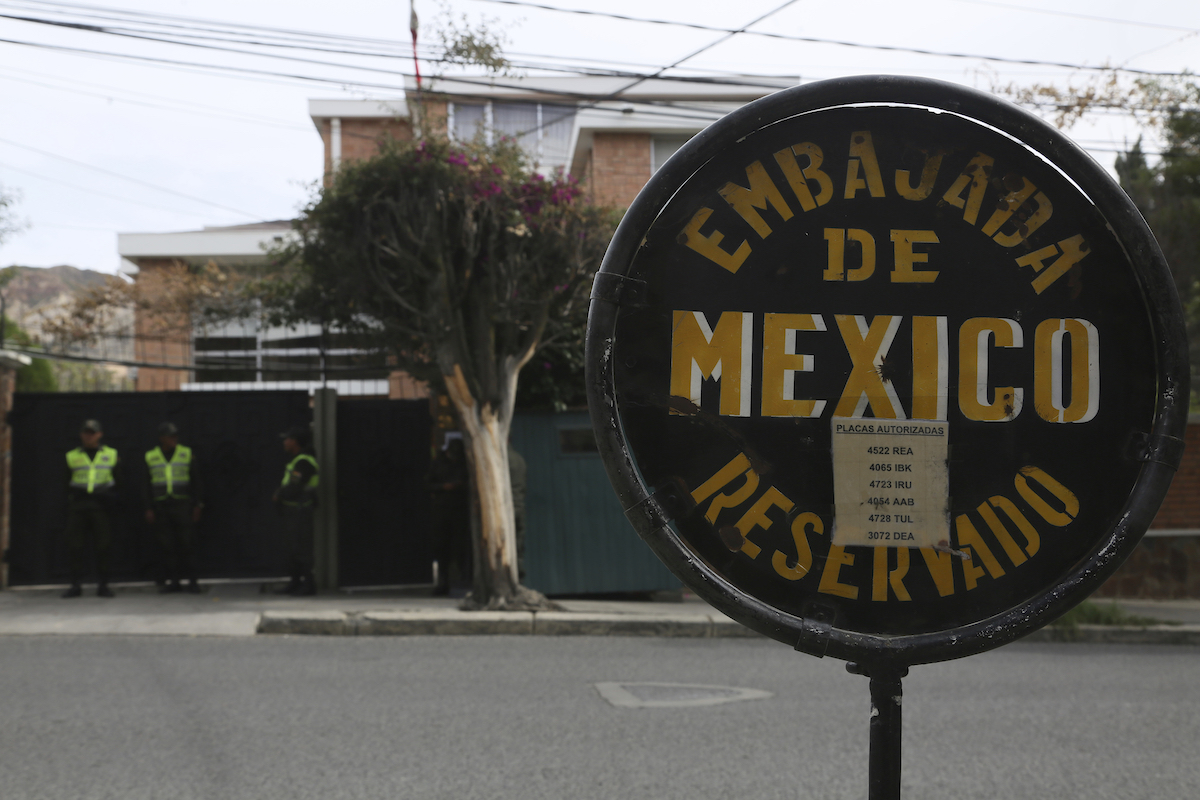 LA PAZ, Bolivia (AP) — A tense diplomatic feud between Bolivia’s conservative interim government and Mexico expanded to include Spain on Friday when a confrontation broke out as Spanish diplomats visited the Mexican ambassador’s residence in La Paz, where members of the ousted leftist government have taken refuge.

Bolivian Foreign Minister Karen Longaric complained that Spanish diplomats were accompanied by masked and armed men on a visit to the residence, calling that an abuse of Bolivia’s sovereignty. She said a protest would be lodged with the European Union, United Nations and Organization of American States.

Television stations broadcast images of a masked person getting out of a Spanish diplomatic vehicle and exchanging words with local police. Civilians then approached and began attacking the car, shouting that there could be an attempt to free nine officials sheltered inside.

The interim government already has been feuding with Mexico, which not only gave refuge to the nine, but also sheltered ousted leader Evo Morales when he resigned the presidency on November 10 after losing the support of the military and police following days of turbulent protests over alleged fraud in his reelection bid.

Bolivian officials accuse several of those inside the embassy of electoral fraud as well as sedition and terrorism for their alleged role in protests that followed Morales’ ouster.

Mexico’s Foreign Relations Department said the incident came as police intercepted Spanish embassy vehicles that were returning to the Mexican mission to pick up the ranking Spanish diplomat, who had made a “courtesy visit” to the Mexican ambassador.

It said a Mexican diplomat in the car was also briefly detained but was allowed to pass after showing identification.

Spain’s Ministry of Foreign Affairs said later it would investigate the incident.

Spanish diplomats in their own country are sometimes accompanied by bodyguards wearing masks to protect their identities as a security measure, though it wasn’t immediately clear if that was the case here.

On Thursday, Mexico’s Foreign Secretary Marcelo Ebrard said his country will file a complaint against the interim government of Bolivia at the International Court of Justice at The Hague, alleging the buildup of security agents around the Mexican ambassador’s residence violates international treaties regarding the rights and protections for diplomatic personnel and installations.

Longaric denied the allegation and her Foreign Ministry issued a statement expressing “deep concern over Mexico’s interference in Bolivia’s internal affairs” but saying it is open to talks.

Morales has since relocated to Argentina and says he plans to stay involved in politics in neighboring Bolivia, while some former top aides remain holed up in the Mexican ambassador’s residence.