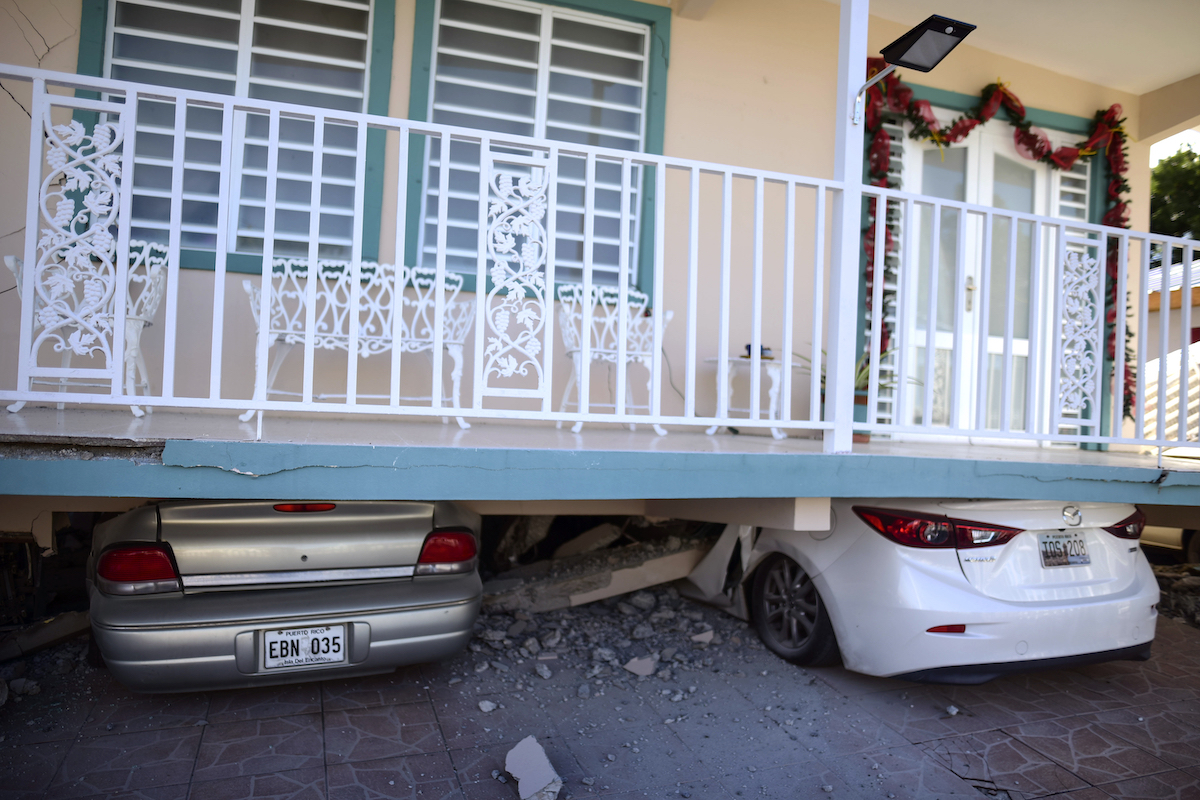 Damage registered after a 5.8-magnitude quake hit Puerto Rico, unleashing small landslides, causing power outages and severely cracking some homes, in Guánica, Puerto Rico, Monday, January 6, 2020. It was one of the strongest quakes yet to hit the U.S. territory that has been shaking for the past week. (AP Photo/Carlos Giusti)

GUÁNICA, Puerto Rico (AP) — A 5.8-magnitude quake hit Puerto Rico before dawn Monday, unleashing small landslides, causing power outages and severely cracking some homes. It was one of the strongest quakes yet to hit the U.S. territory that has been shaking for the past week.

There were no immediate reports of casualties.

The quake was followed by a string of smaller temblors, including another quake measured at magnitude 5 that struck later Monday, at 10:51 a.m. (1451 GMT), shaking power lines and frightening residents of southern Puerto Rico who had been waiting outside their homes due to fears the buildings were damaged and unstable.

The first quake struck at 6:32 a.m. (1032 GMT) just south of the island at a relatively shallow depth of 10 kilometers (6 miles), according to the U.S. Geological Service. There was no tsunami threat, officials said.

Power outages were reported in some parts of Puerto Rico following the quake, Ángel Vázquez, emergency management director for the southern coastal city of Ponce, told The Associated Press.

“This is one of the strongest quakes to date since it started shaking on December 28,” he said. “It lasted a long time.”

Helicopters buzzed overhead as terrified residents jumped up from their folding chairs every time the earth shook, yelling at others to stay away from power lines. 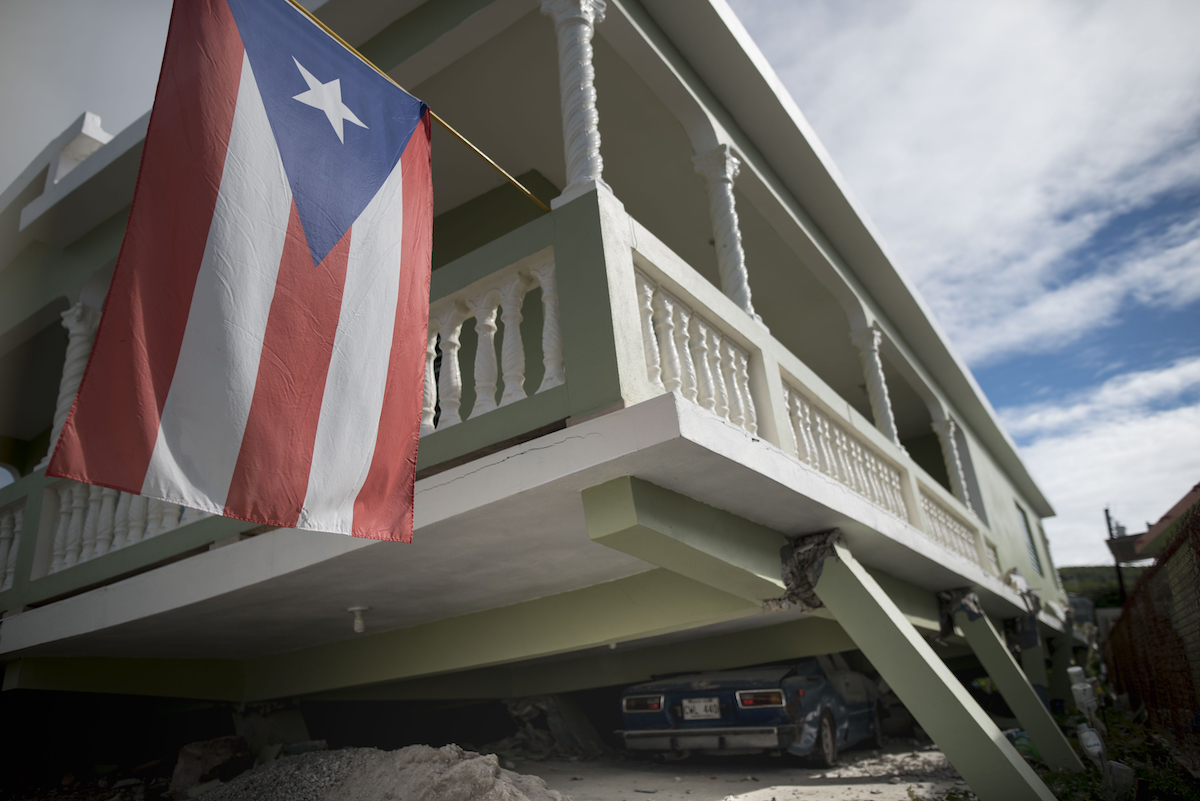 A Puerto Rican flag hangs from the porch of a home that collapsed on top of parked cars after an earthquake hit Guánica, Puerto Rico, Monday, January 6, 2020. (AP Photo/Carlos Giusti)

Few people dared go back inside their homes, but José Quiñones, 54, had no choice. His 80-year-old mother had heart problems and was lying in bed.

Dozens of people in a neighborhood called Hope in the southwest town of Guánica walked around with their phones and yelled out the magnitude of the latest earthquakes as they tried to calm children who were forced to open their presents on Three Kings Day, a religious holiday, on streets and sidewalks.

“This is hell,” said Alberto Rodríguez, 43, whose home collapsed on its side as the smell of gas filled the air. “We haven’t slept… you can’t remain calm here. Guánica is no longer a safe place.”

Less than a block away, Silvestre Alicea surveyed his home whose foundation collapsed on his bright blue 1977 Toyota Corolla, a prized possession.

He jumped from his balcony as the home collapsed.

Alicea had lived in New York for years until he retired to Guánica two years ago to live in the home he spent 15 years building. He doesn’t have insurance.

In this working class neighborhood, people shared soda and snacks as they sought shelter from a harsh sun, careful to stay away from homes whose columns and foundations were heavily cracked.

Many already had bags packed in their cars with a change of clothes, food, water and medicine.

Some like Noelia De Jesús, 69, and her husband, who uses a wheelchair, didn’t know where they would spend the night. Government officials who inspected their home earlier in the morning said it was unsafe to live in and advised them to stay elsewhere.

“Everything broke, including the TV,” she said. “This is horrible.”

Puerto Rico doesn’t have a public earthquake warning system, except for sirens that are supposed to ring in case of a tsunami. Residents in this neighborhood criticized the government for what they believe is a lack of action. 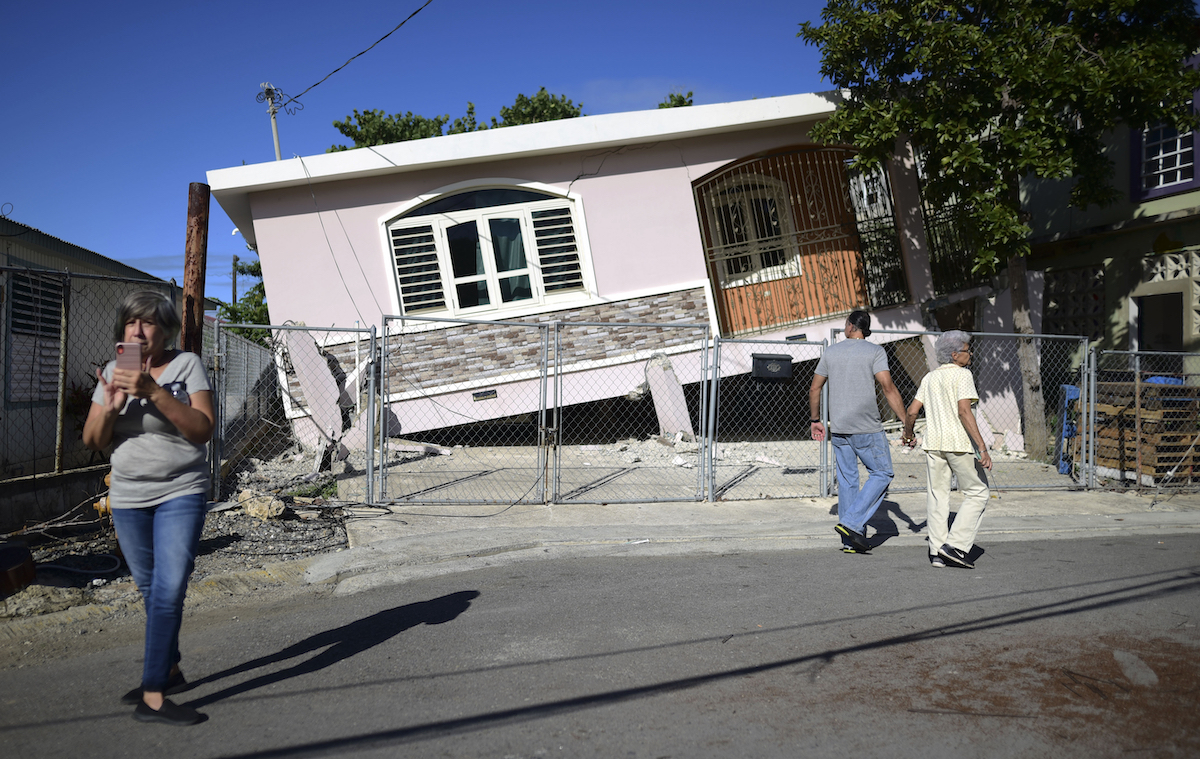 A house in Guánica, Puerto Rico damaged by a 5.8-magnitude quake that hit on Monday, January 6, 2020. It was one of the strongest quakes yet to hit the U.S. territory that has been shaking for the past week. (AP Photo/Carlos Giusti)

Dr. Sindia Alvarado, who lives in the southern coastal town of Peñuelas, said she was petrified.

“My entire family woke up screaming,” she said. “I though the house was going to crack in half.”

The flurry of quakes in Puerto Rico’s southern region began the night of December 28, with quakes ranging in magnitude from 4.7 to 5.1. Previous quakes of lesser magnitudes in recent days have cracked homes and led to goods falling off supermarket shelves.

Víctor Huérfano, director of Puerto Rico’s Seismic Network, told the AP that shallow quakes were occurring along three faults in Puerto Rico’s southwest region: Lajas Valley, Montalva Point and the Guayanilla Canyon. He said the quakes overall come as the North American plate and the Caribbean plate squeezes Puerto Rico, and that it was unclear when they would stop or if bigger quakes would occur.

One of the largest and most damaging earthquakes to hit Puerto Rico occurred in October 1918, when a 7.3-magnitude quake struck near the island’s northwest coast, unleashing a tsunami and killing 116 people.