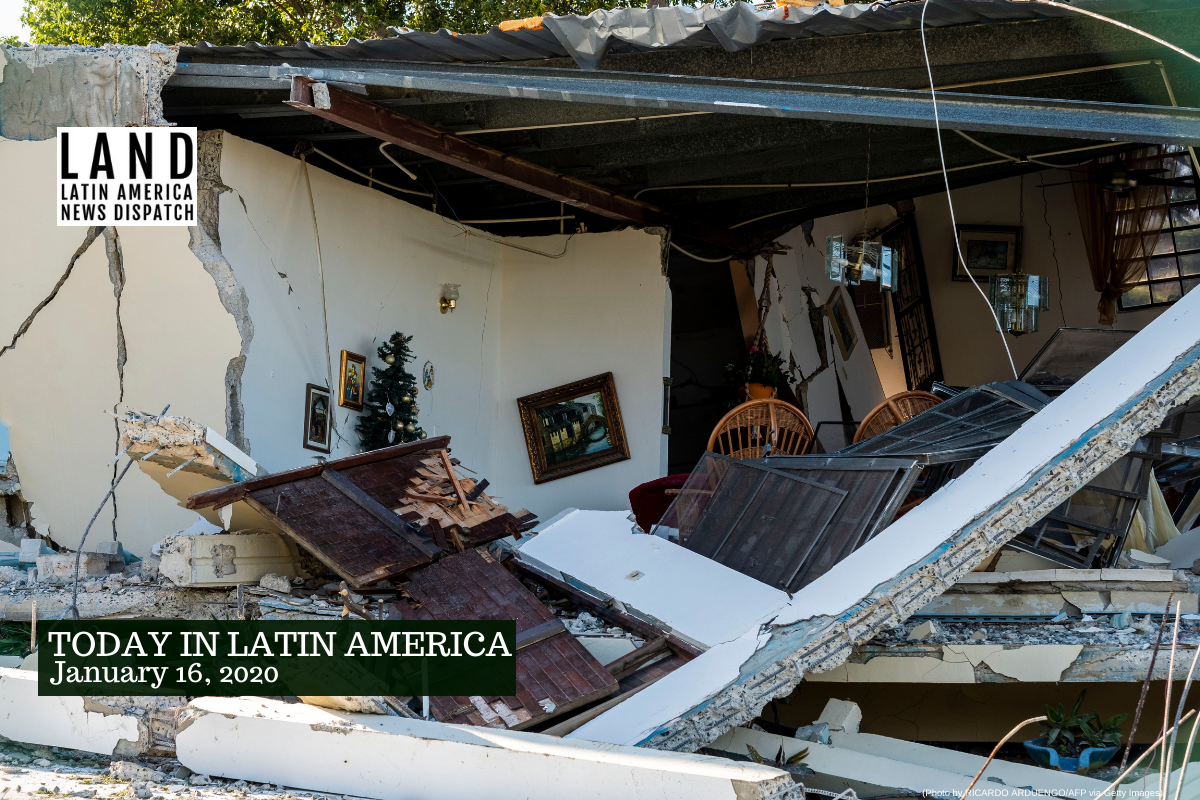 A house damaged by an earthquake is seen in Guanica, Puerto Rico on January 15, 2020, after a powerful earthquake hit the island. (Photo by Ricardo Arduengo/AFP via Getty Images)

PUERTO RICO: The Preliminary Damage Assessment prepared by the Puerto Rican government and the Federal Emergency Management Agency estimates that almost 800 houses were affected by the earthquakes that have hit the Caribbean island since Dec. 28. Secretary of State Elmer Román said that 88 of the houses were completely destroyed and 257 have great damages that make them inhabitable. The numbers, however, may be even higher, since new information is still being gathered for the census.

The PDA will be added to Puerto Rico’s major disaster declaration, which has not been signed by President Donald Trump. Puerto Ricans expect to receive $18 billion in federal funding. According to the U.S. Geological Survey, almost 1,300 earthquakes have shaken the island since the end of last year, causing at least $110 million in damage. More than two dozen of the quakes were magnitude 4.5 or greater. Seismologists are studying what is causing the unusual —but not unexpected— seismic activity.

BRAZIL: Government officials reaffirmed yesterday that geosin, an organic compound, is the cause of foul tasting and smelling water in the city of Rio de Janeiro. Several neighborhoods have reported brown and red tinted tap water that could be responsible for a spike in cases of diarrhea, gastroenteritis and vomiting. Residents have expressed concern and begun hoarding bottled water. Rio Governor Wilson Witzel demanded an immediate solution to the week-long problem from Cedae, the state water utility company.

BRAZIL: U.S. President Donald Trump’s administration announced support of Brazilian membership to the Organization for Economic Cooperation and Development yesterday. The OECD is a Paris-based organization that advises developed countries on economic policy and increases investor confidence. Trump had previously supported Argentine inclusion, but seemed to have backed away following the victory of leftist Alberto Fernández in their latest presidential elections.

BOLIVIA: The U.S. Agency for International Development will return to Bolivia with two programs this month after having been kicked out of the country six years ago. The first program will support the functioning of the Supreme Electoral Tribunal through the acquisition of new voting equipment and the repair of government electoral authority buildings that were damaging in the October 2019 post-election riots. The second program focuses on the environmental protection of the Chiquitania region that was severely degraded following uncontrolled fires last year. The party of exiled former president Evo Morales, Movimiento Al Socialismo, has criticized USAID’s electoral assistance program considering U.S. President Donald Trump has already taken a side in the political crisis.

PERU: Authorities announced on Tuesday the deportation of five tourists and the prosecution of another after allegedly damaging the ruins of Machu Picchu and defecating on them. According to police, the tourists snuck into the ruins of the Temple of the Sun and caused a rock from a wall to fall. An Argentine male will be prosecuted for supposedly leading the vandalism. The other tourists were from Chile, Brazil and France. Machu Picchu is a UNESCO World Heritage site.

VENEZUELA: Opposition lawmakers were prevented by government supporters from reaching the National Assembly yesterday. Government authorities and armed loyalist militias blocked the cars of opposition lawmakers who were forced to hold their session outside. The move is the latest in President Nicolás Maduro’s attempts to wrestle control of the opposition-dominated National Assembly.

EL SALVADOR: In 2019, 35,129 Salvadoran migrants were deported from other countries, a 40 percent increase compared to 2018, when there were 24,842 deportations. Mexico presented the biggest increase: 67 percent, a jump from 10,548 to 17,609 people sent home. There was a 23 percent growth in Salvadorans attempting to enter the United States. Currently, Salvadoran asylum seekers who reach the Unite States can be sent to Guatemala, due to an agreement between countries. The plan was for El Salvador to also receive asylum seekers, but in December President Nayib Bukele said the country can’t live up to the deal because the “whole economy is in shatters.” Bukele added that his country has crime problems, which is one of the reasons why so many Salvadorans leave the country.

GUATEMALA: Just one day after leaving office and losing immunity from prosecution, the former Economics Minister Acisclo Valladares Urruela appeared in court yesterday for a corruption probe. There were no warrants to capture him. Prosecutors say that between 2012 and 2015, Valladares was in a network of bribes in which he paid the then-Vice President Roxana Baldetti, now behind bars, so she could pass along the money to lawmakers. Following the investigations, a former lawmaker was also detained yesterday. Four other lawmakers are under suspicion; all of them lost immunity with the inauguration of the new Congress. Valladares said he submits himself to justice and hadn’t done that before because of his position. The day before, while President Alejandro Giammattei took office, Guatemalans threw eggs at former President Jimmy Morales and demanded his arrest for corruption.

MEXICO: On Tuesday, Mexican authorities found a clandestine burial pit with at least five corpses in the Gulf coast state of Tabasco. The identities of the bodies or their ages have not been determined yet. The pit was found in the township of Nacajuca, an impoverished but quiet town where President Andrés Manual López Obrador had his first major public post serving as government representative for the Indigenous institute in the late 1970s and early 1980s. Yesterday, López Obrador said his administration has been able to slow the homicide rate increase. However, according to the Associated Press, November figures suggest that killings actually rose by about 7% compared to November 2018.

MEXICO: Mexico City’s subway system listed “corrosion due to urine” as one of the top five causes of escalator breakdowns at subway stops. Riders are urinating on escalators which is corroding their drive wheels and mechanisms. “When we open up escalators for maintenance, there is always urine,” said Fermín Ramírez, the Metro system’s assistant manager for rails and facilities. In response, Twitter users pointed out that most stations have no public bathroom facilities, not even any pay toilets. Despite the urine issue, subway authorities acknowledge the biggest problem is that the escalators are old or have been damaged by rough use. Out of the system’s 467 escalators, 22 are out of service on a daily basis.

UNITED STATES:  In an unusual move, U.S. Immigration and Customs Enforcement subpoenaed Denver law enforcement yesterday for information on four foreign nationals, three Mexicans and one Honduran, wanted for deportation. This escalates the existing conflict between federal officials and sanctuary cities. If city officials don’t respond to the subpoena, ICE could take it to a federal judge. The battle between sanctuary cities and federal law enforcement has escalated since Trump took office. According to ICE, the four foreign nationals had all been arrested for sexual assault and child abuse, and have been deported before. Immigration officials alerted a Denver jail on the suspects’ release, but Denver, much like New York, Philadelphia and San Francisco, does not help federal immigration authorities. Three of the men were released, and one remains in custody.