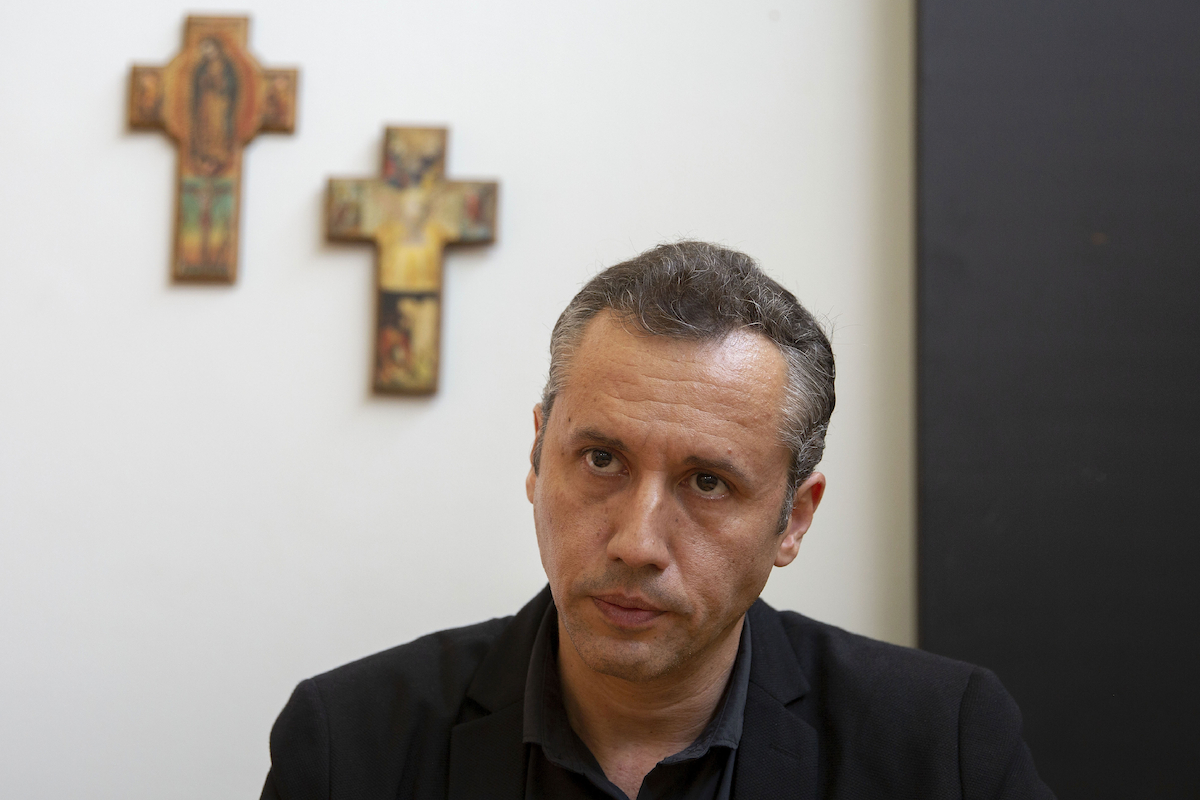 In this October 25, 2019 file photo, Roberto Alvim, director of theater, dance and opera at the Brazil’s National Arts Foundation, poses for pictures in Brasilia, Brazil. Brazil’s government has drawn criticism after launching a project that aims to revamp the country’s arts scene, with a focus on nationalism and religion, with Alvim being the driving force behind the initiative. (AP Photo/Eraldo Peres, File)

Alvim had held the post since November. Brazilian President Jair Bolsonaro removed him after a backlash from Jewish organizations, key lawmakers, political parties, artists and the country’s bar association.

Though cash-strapped, Bolsonaro had announced Alvim’s $4.9 million arts initiative, focused on nationalism and religion, to foment the production of literature, theater, opera, music and other arts.

Alvim, a born-again Christian who found renewed faith while recovering from cancer, delivered a separate message about the initiative using a phrase that local media and some other commentators identified as resembling language in a speech by Goebbels. Alvim, who has disavowed Nazism, acknowledged the similarity but said it was merely a “rhetorical coincidence.”

The speeches, whose words have been reviewed by the AP, both say the nation’s art “in the next decade will be heroic” and “will be national.” Both men conclude with a dramatic note, saying their country’s art will be deeply connected to their people “or it will be nothing.”

Bolsonaro said in a statement that Alvim’s comments constituted, “An unfortunate pronouncement, even though he apologized, that made it unsustainable for him to stay.”

While the amount to be spent is a drop in the bucket compared to other arts funding, the project jibes with the government’s other efforts to overturn what Bolsonaro calls “cultural Marxism” and some of his ministers say is undermining society’s morals. The leftist Workers’ Party governed Brazil for 13 years until 2016.

More than 57 million people —55% of the voters in 2018’s election— embraced Bolsonaro’s anti-leftist campaign, in which he promised to fight corruption, violence and leftist ideology with the same energy.

Speaking in a message released Thursday, with a wooden cross atop his desk, Alvim had said he wants 2020 to mark a historic cultural rebirth to “create a new and thriving Brazilian civilization.”

He sat beneath a framed picture of Bolsonaro, and orchestral strings played lightly in the background. The music is from an opera by Richard Wagner, sometimes associated with Nazism and German nationalism. Alvim said in a radio interview that he chose the music himself, because the work is transcendent and stemmed from Wagner’s Christian faith.

“Alvim’s speech is dangerous for many reasons. Firstly, due to the fact that it made a very direct and shameless apology to Nazism,” former culture minister Marcelo Calero said at his home. “After that, the aesthetics; it’s a Nazi-fascist aesthetic that the video evokes.”

Some Brazilians reacted with shock at Alvim’s comments, while some Bolsonaro supporters expressed dismay at the decision to fire him.

“It shows the government that we have nowadays, which follows an authoritarian path, against the people, against culture itself,” Amanda Teles, 26, said on Twitter.

Rosangela Deckmann, a Brazilian from Porto Alegre, tweeted that she was sorry that Alvim was fired.

“Brazil’s culture had taken the correct path through his hands. With his exit, the left will manage to use all its wrath and revenge against him,” she said.

The cultural campaign in Brazil goes well beyond the arts. From school textbooks to teen pregnancy, from the walls of private museums to those of public institutions, the 2020 ideological push is shaping up on several fronts. And after a series of high-profile resignations and dismissals in year one, Bolsonaro begins his second year in office with a new ministerial team to implement its leader’s conservative agenda.

“I’m back, ready for battle,” education minister Abraham Weintraub tweeted January 5, calling his followers to support him in his fight against “oligarchs, corrupt individuals and the communist-socialist ideological wing.”

Bolsonaro has made education, especially in early childhood, one of his top priorities. On January 7, he and Weintraub — is second education minister in a year— spoke live on Facebook and accused previous administrations of turning the ministry of 300,000 employees into a factory of “militants.” The two announced a complete “clean-up” of kids’ school textbooks.

“There are still some [textbooks] that we don’t like but a lot of filth has already come out,” Weintraub assured Bolsonaro. 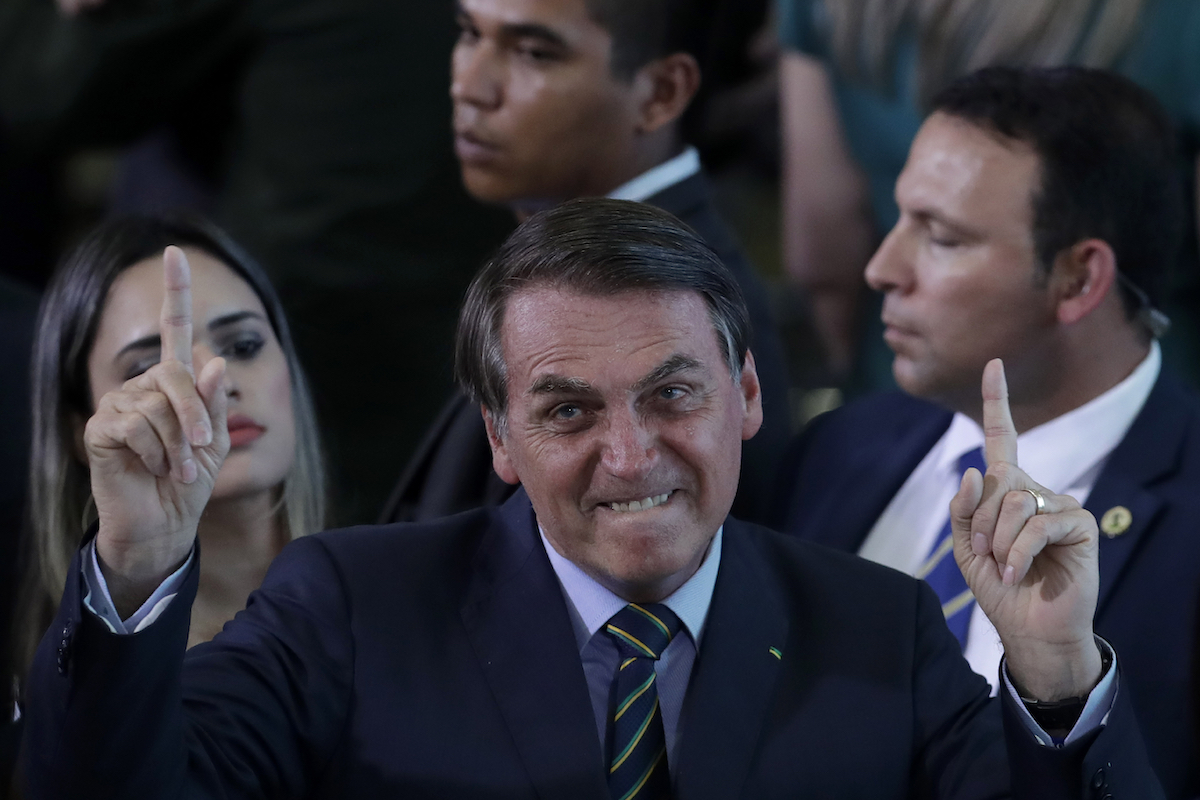 For Claudia Costin, a former education secretary in Rio de Janeiro and former senior director for education at the World Bank, the culture wars are a waste of precious time. Brazil ranked in the bottom third of the 79 countries and economies that took part in the 2018 Program for International Student Assessment conducted by the Organization of Economic Cooperation and Development. According to the test’s results, Brazilian students have stagnated in mathematics, reading and science. Public schools are performing particularly poorly.

“We have a lot of homework to do,” Costin said. “All this is a distraction from what really needs to be done.”

The government’s conservative agenda has also pushed into health matters.

Damares Alves, the minister of women, family and human rights, recently shared news of an approach to fighting teen pregnancy that would focus on advocating sexual abstinence.

The campaign, expected to be unveiled in the coming days, will target youths, but also parents, educators, and health workers, said Angela Gandra, the secretary in charge of family affairs at Alvares’ ministry. She stressed that the campaign is complementary to existing methods of contraception.

“We want to bring reflection to the parents and the children about what human relations are,” Gandra said at the ministry’s building in Brasilia.

At the building next door, in the culture’s secretary’s office, the future of Alvim’s promised campaign is now uncertain. The potential impact of his arts initiative itself was already dubious given its small value, according to Fernando Schuler, a political philosophy professor at university Insper. Still, this could be the first phase of financial incentives that swell once Brazil overcomes its current fiscal crunch, he said.