‘Hugs, Not Bullets:’ Mexico’s Struggle With High Rates of Disappearances and Homicides 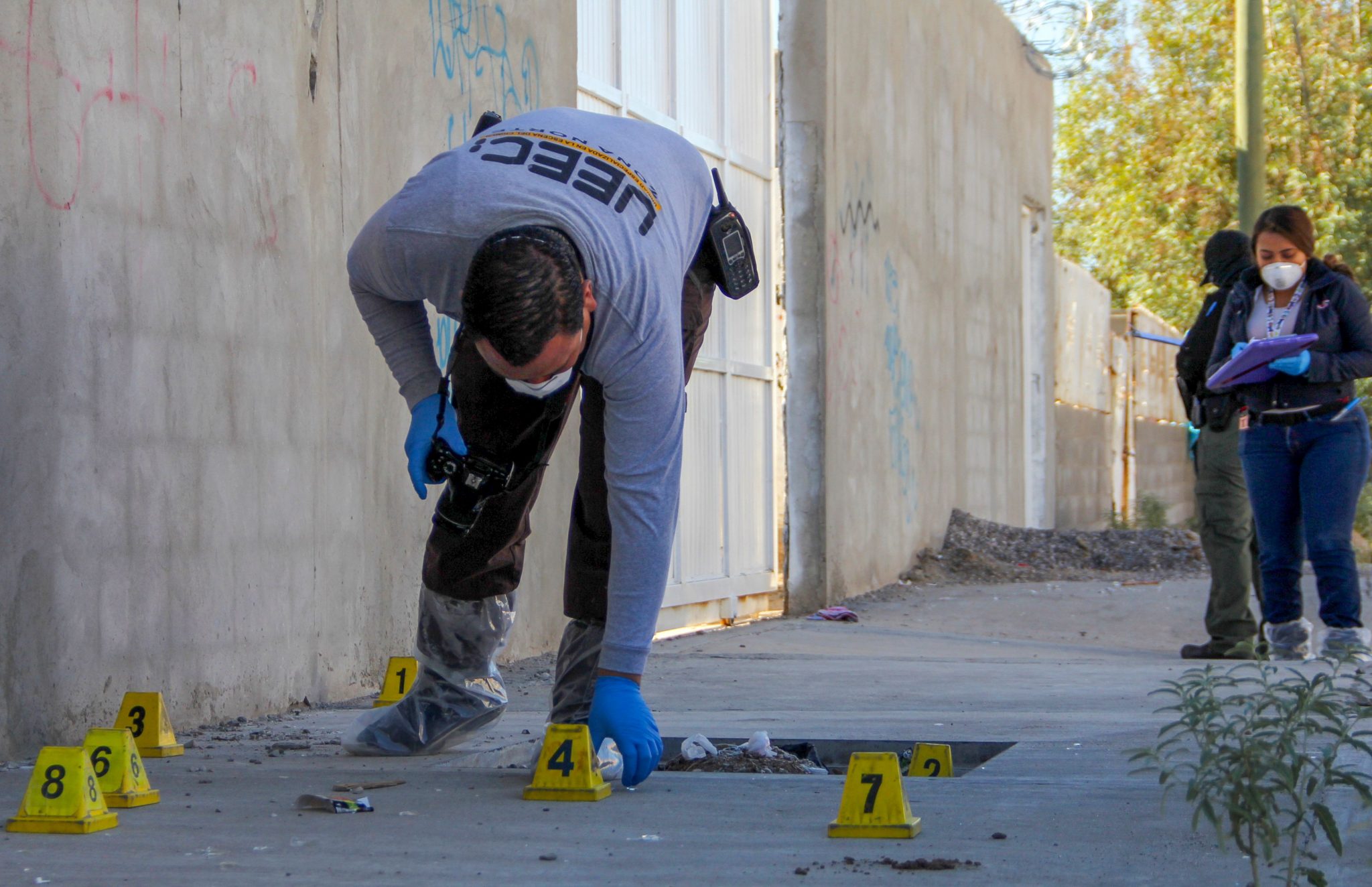 Rafael García of the Crime Scene Specialized Unit (UEEC) of the Laboratory of Expert Services and Forensic Sciences of the General Prosecutor’s Office of Chihuahua, works where the body of a man who was found inside a vehicle, in Ciudad Juárez, Chihuahua state, Mexico, on October 10, 2018. (HERIKA MARTINEZ/AFP via Getty Images)

At a rally in the state of Sinaloa during his presidential campaign, López Obrador said, “We are going to change this rotten, corrupt regime of injustice and privilege, and we are going to promote development. I can sum it up in one sentence: work, good salaries and hugs, not bullets.” And while López Obrador’s platform included efforts to mitigate the high rates of disappearances and homicides with a strategy of “abrazos, no balazos”  (“hugs, not bullets”)—addressing the issue has proven to be an ongoing struggle.

The strategy was challenged less than a year into López Obrador’s tenure. At an April 2019 news conference, López Obrador stated that México’s homicide rates were down. According to him, the government had “maintained the levels that existed previously or reversed the trend.”

Univision’s Jorge Ramos questioned López Obrador’s remarks insisting that if current trends continued, “2019 will be the bloodiest and most violent year in the modern history of Mexico.” López Obrador disagreed saying “we have controlled the situation, according to our data.” 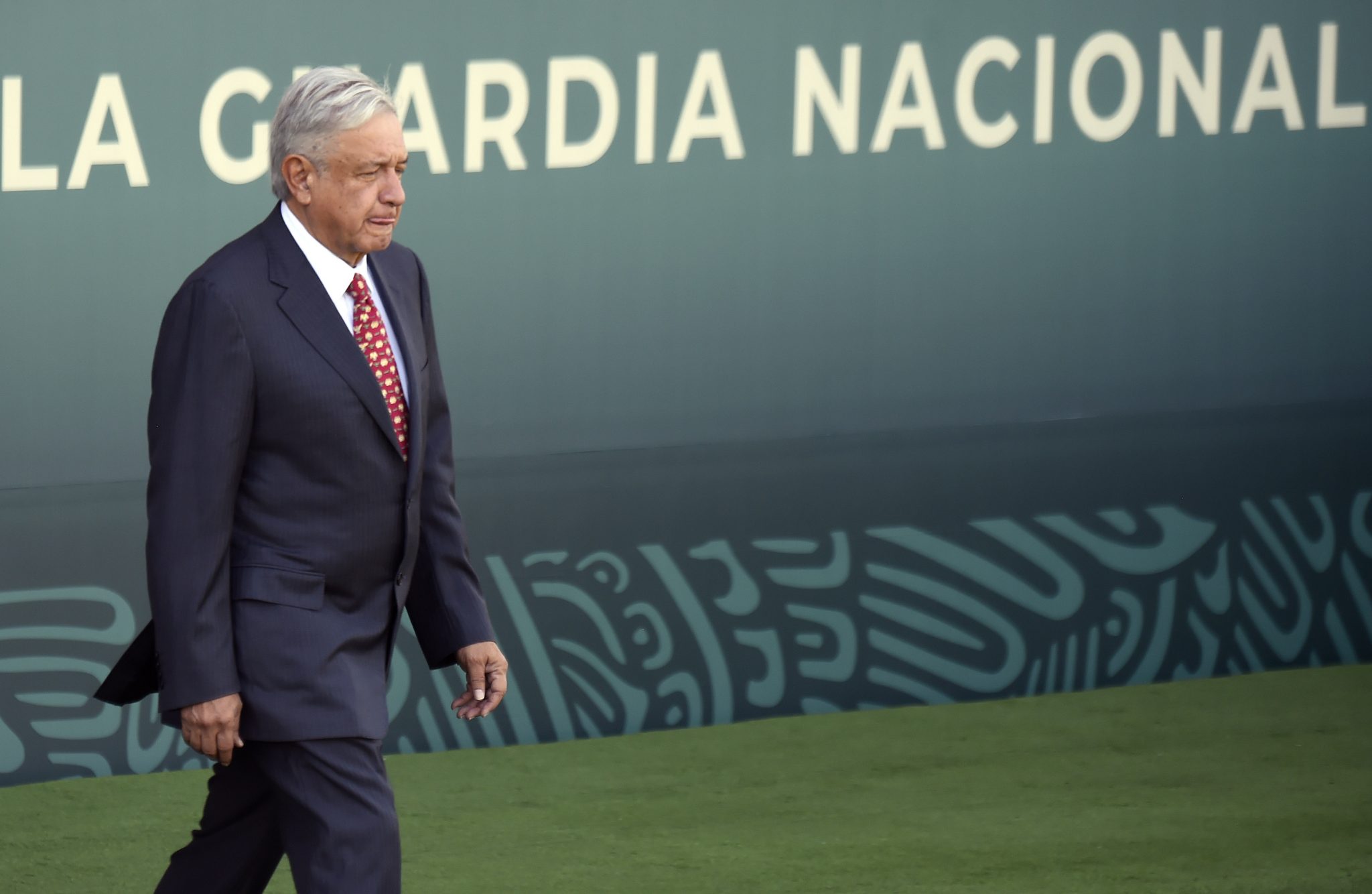 The staggering total has overwhelmed local and state authorities. An NPR report found that morgues continue to overflow as families search for the remains of loved ones. María del Rosillo Limón Maldonado, featured in the report, has not seen her daughter Paulina since 2015. Another mother, María Ramos, had not seen her 34-year-old son since October 2018.

The state of Jalisco has faced scrutiny for its treatment of corpses. Running out of room, state authorities had rented a refrigerated semi-trailer where more than 150 bodies were stored. The truck was then taken and driven around the capital, Guadalajara. Citizens complained of the smell that followed, and human rights organizations such as Mexico’s National Human Rights Commission (CNDH) denounced the events. The CNDH said that “such events represent a lack of respect for the dignity of the deceased and violate their fundamental rights and those of their family members.”

The scandal resulted in the dismissal of the state’s top prosecutor and director of the state’s forensic institute. Jalisco’s former governor, Aristóteles Sandoval told reporters, “We can’t accept acts of indifference, of a lack of sensitivity … There is no way I will tolerate them.”

Jalisco’s negligence has contributed to what Karla Quintana, head of the National Search Commission (CNB), called a forensic crisis in Mexico. Facilities equipped to process and store only a couple hundred corpses, store as high as 600.

As a result, it has forced families to search for the remains of loved ones amid the chaos. A morgue in the state of Veracruz, featured in a September 2018 report by Reuters, was visited by families who searched for the remains of 150 individuals. One of them, Paloma Martínez, had hoped to find her older sister, missing since 2016. Paloma echoed the sentiments of thousands of families, “we still hope we can find her,” she said. “My mother and I are here to see if there are ID cards or clothes or any clue that show us that she’s here… we’ve lived with anguish, and questions without answers.”

The official government estimate has placed the total number of disappeared individuals at 61,637, with nearly three-quarters of the total being men. In an interview with Spanish newspaper El País, Alejandro Encinas, undersecretary of Human Rights and Population at the Ministry of the Interior (SEGOB) said that “[the administration of López Obrador] inherited a humanitarian crisis that reached alarming figures…”

The federal government, with state and local contributions, has attempted to remedy that problem. México has added five new regional forensic institutes in the states of Baja California Sur, Coahuila, Nuevo León, Sinaloa, Sonora and Veracruz. In addition, it’s added fifteen cemeteries —three in Sinaloa and Veracruz, two in Guerrero and Jalisco with the remaining in the states of Baja California, Colima, Michoacán, Nayarit, and Tamaulipas— and has re-established the National Search System (SNB). 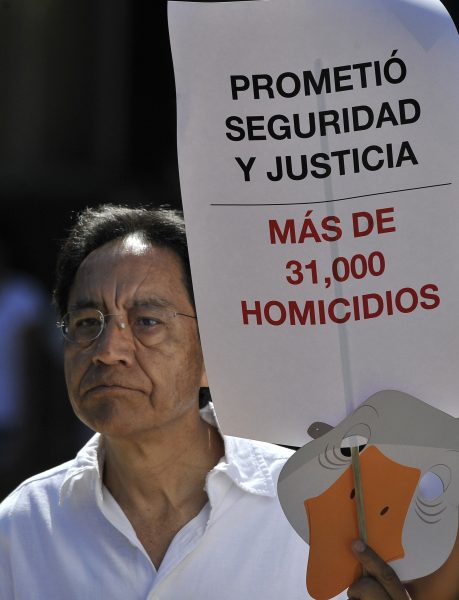 A man holds a sign reading “He promised security and justice. Over 31,000 homicides” during a march against Mexican President Andrés Manuel López Obrador’s policies, on his first year in office, in Mexico City, on December 1, 2019. (Photo by CLAUDIO CRUZ/AFP via Getty Images)

“We must guarantee an adequate search that allows us to locate disappeared persons and guarantee their identification, we want a dignified treatment of the bodies and guarantee their right to identity,” Encinas said. The anticipated allocation of funds was estimated at 410 million pesos to the budget of the SNB’s first stage, according to Encinas.

In March, López Obrador lamented the mistreatment of bodies calling it “horrifying and inhumane,” while establishing a September deadline for states to implement local search systems for missing people. “There will be all the support and all the funds necessary to address this outcry…This is the worst legacy left to us by past governments,” said López Obrador.

As López Obrador and his administration continue to institute new measures to address the crisis, a result of the bloodshed is clandestine graves, which has caused government officials like Encinas to acknowledge that México is a “huge clandestine grave.”

A feature from journalistic project “A dónde van los desaparecidos” or “Where have the missing gone,” detailed the presence of these mass graves in Mexico. The group found that from 2006 to 2016, there were 1,978 clandestine burials across 24 states in Mexico. From these graves, 2,884 bodies were found of which 1,738 individuals were identified.

A report from the CNDH had reached a similar conclusion. From January 1, 2007 to September 30, 2016, authorities found 855 clandestine graves that contained 1,548 corpses with a total of 35,958 skeletal and human remains exhumed.

At Colinas de Santa Fe in Veracruz, authorities found a clandestine grave with 252 individuals in 2017. Of these, two were identified—a young state investigator, Pedro Huesca, and his personal secretary, Gerardo Montiel Hernández. 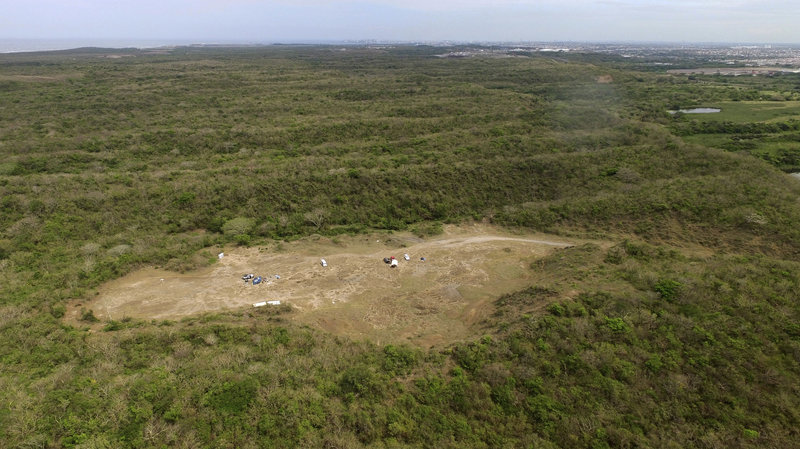 This aerial image shows the area known as Colinas de Santa Fe where Mexican authorities work to find the remains of people buried in mass graves on the outskirts of Veracruz. More than 250 skulls were found there earlier this year in what appears to be a drug cartel’s mass burial ground, prosecutors said. (Jonathan Estudillo/AP)

The Los Angeles Times reported on Huesca and Hernández’ demise. Huesca’s mother, Griselda Barradas, said her “son was a very honest person” who “had a lot of dreams, like so many young people who were disappeared and saw their dreams smashed.” According to Barradas, Huesca’s death occurred on April 15, 2013.

Detained by state police from the Ministry of Public Security (SSP), and with the support of hitmen called for by the Jalisco New Generation Cartel, Huesca and Hernández were executed on April 15, 2013. Huesca, according to news-magazine Proceso, was a former investigator with the Ministry of the Navy (SEMAR), whose work conflicted with the interests of the Jalisco New Generation Cartel, Los Zetas, and officials in the administration of disgraced former governor Javier Duarte.

Nearly four years separated the disappearances of Hernández and Huesca from the discovery of the mass grave. The problem according to Jorge Winckler, Attorney General of the state of Veracruz, was made worse by the previous administration.

In an interview with television network Televisa, Winckler claimed that under former Governor Duarte, the state of Veracruz, recognized 300 disappeared individuals, while under current president López Obrador, the state recognized the disappearance of 5,000 people. Winckler had, in the same interview, called Veracruz “a huge pit… because for years organized crime disappeared and murdered people with the complicity of authorities.”

In September 2018, officials in Veracruz discovered 168 human skulls in the second largest mass grave in the state, according to Winckler. Maria Elena Morera, head of victim’s advocacy group Causa en Común, told the Wall Street Journal, “This is the latest confirmation of the degree of impunity drug gangs operated in Veracruz during Duarte’s government. He allowed this to happen.”

The accusation that authorities were complicit, or hid the locations of mass graves, is not exclusive to Veracruz. In April 2018, according to digital publication Animal Politico, exhumation began on a mass grave on the outskirts of Miguel Alemán, a small city in northern Tamaulipas, northwest of Nuevo Laredo.

Mothers such as María Isela Valdez, who was the victim of extortion and kidnapping by the Gulf Cartel, discovered 500 bodies “wrapped in blankets, tied with their owns belts, faces bandaged, handcuffed and feet tied.” The exhumation was coordinated with local and state authorities. However, according to María Isela, after three months, “the state attorney general, Irving Barrios, and the prosecutor for disappearances, Elizabeth Almanza, decided to suspend exhumations. They closed the three graves when there were still many bodies inside and only 265 bodies were removed.”

From Sinaloa, Mirna Medina shares a similar tragedy. Medina lost her son, Roberto Corrales Medina, on July 14, 2014 with authorities offering little help. “It was so much, my pain,” she said, “that from that moment I made a promise to my treasure: I will look for you until I find you.”

Medina and a group of other mothers —known as Las Rastreadoras — who had lost children formed a collective called “Missing Persons of El Fuerte.” Since its creation, the collective has found 178 individuals or “treasures,” including finding Medina’s treasure (her son Roberto) in June 2017.

The creation of collectives like Las Rastreadoras and the efforts of determined individuals like María Isela have appeared to make little difference in mitigating the conditions that created the high-rate of disappearances and homicides. Such responsibilities, however, do not deserve to fall on the shoulders of grieving children, parents or spouses.

“We’re crazy with despair and pain,” Medina said, “we’re not looking for culprits, we’re just looking for our children.”

One response to “‘Hugs, Not Bullets:’ Mexico’s Struggle With High Rates of Disappearances and Homicides”