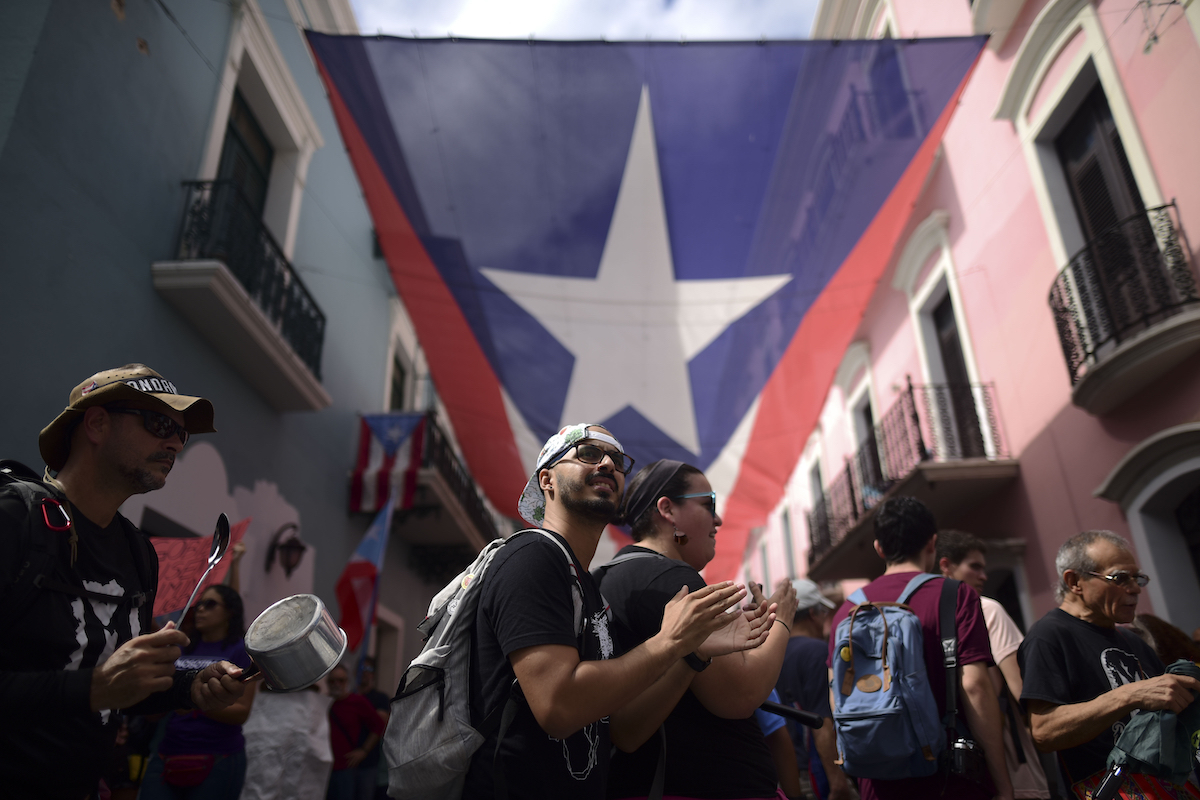 Editor’s Note: Latino Rebels added details to this story about the use of riot police during the protest and included a statement by Gov. Vázquez that her Twitter profile posted.

SAN JUAN, Puerto Rico (AP) — Hundreds of demonstrators gathered outside the seaside governor’s mansion and Capitol building on Monday to demand the U.S. territory’s leader resignation and to protest the recent discovery of apparently forgotten disaster supplies amid continuing earthquakes.

“We have to get rid of all the corrupt officials,” said Mari Rivera, a government employee who said that Gov. Wanda Vazquez “needs to stop blaming others and show her face.”

About 600 people banged on pots and some waved Puerto Rican flags as one of them yelled into a bullhorn, “Wanda, turn over the disaster supplies!”

Evangelical preacher Ramón Marrero, who drove up from the southern coastal town of Guayama with his wife and daughters, said they came “to show our indignation, our annoyance, our rebellion.”

The scene reminded many of the beginning of protests that escalated over the summer and led to the resignation of former Gov. Ricardo Rosselló, with demonstrators once again vowing to remain in the streets until Vázquez also steps down.

“This fight goes on no matter what!” they chanted.

Joining the fight soon is Puerto Rican star Ricky Martin, who announced on Instagram that he was en route to the island.

Martin was also part of last year’s protests, along with several other renown artists who drew tens of thousands of people to the streets.

Vázquez said she had lost confidence in those officials after the discovery of a warehouse in the southern coastal city of Ponce that was filled with disaster supplies dating from when Hurricane María hit the island in September 2017.

She ordered an investigation into the incident and said there would be no prosecution of a crowd that broke into the warehouse Saturday to distribute supplies to people affected by the recent 6.4 magnitude earthquake, which killed one person and caused an estimated $200 million in damage.

Officials said a preliminary report on the investigation was completed late Monday, and Vázquez said she was turning it over to the island’s Justice Department for a more in-depth probe based on the recommendation of Puerto Rico’s Special Investigations Bureau.

Vázquez has warned that the incident would further erode the U.S. government’s trust in Puerto Rico, which is still awaiting millions of dollars in federal aid for Hurricane Maria amid concerns of corruption and mismanagement.

Underlining that concern, Ben Carson, secretary of the U.S. Department of Housing and Urban Development, tweeted Sunday that “the news out of Puerto Rico is disturbing, to say the least.”

The news out of Puerto Rico is disturbing, to say the least. In order for healing to begin, the corruption must end. This further underscores the importance of the reforms and financial controls we put in place to ensure these resources reach those who need them most.

“In order for healing to begin, the corruption must end. This further underscores the importance of the reforms and financial controls we put in place to ensure these resources reach those who need them most,” he added.

Social media reports from journalists and observers during the Monday protests showed police in riot gear near La Fortaleza.

Around 4 p.m. local time, Vázquez’s Twitter profile said that she had called off these police officers and said that only regular security was in place.

"I respect citizens' constitutional rights to demonstrate & I trust that my Puerto Rican brothers & sisters will do it orderly. There's no need for use of strike forces at this time, which is why I have requested that they retreat & just have regular security in place." https://t.co/Rsqg8hrmKK

This story was updated at 7:15 p.m. ET to reflect new information about how many people were at protest.