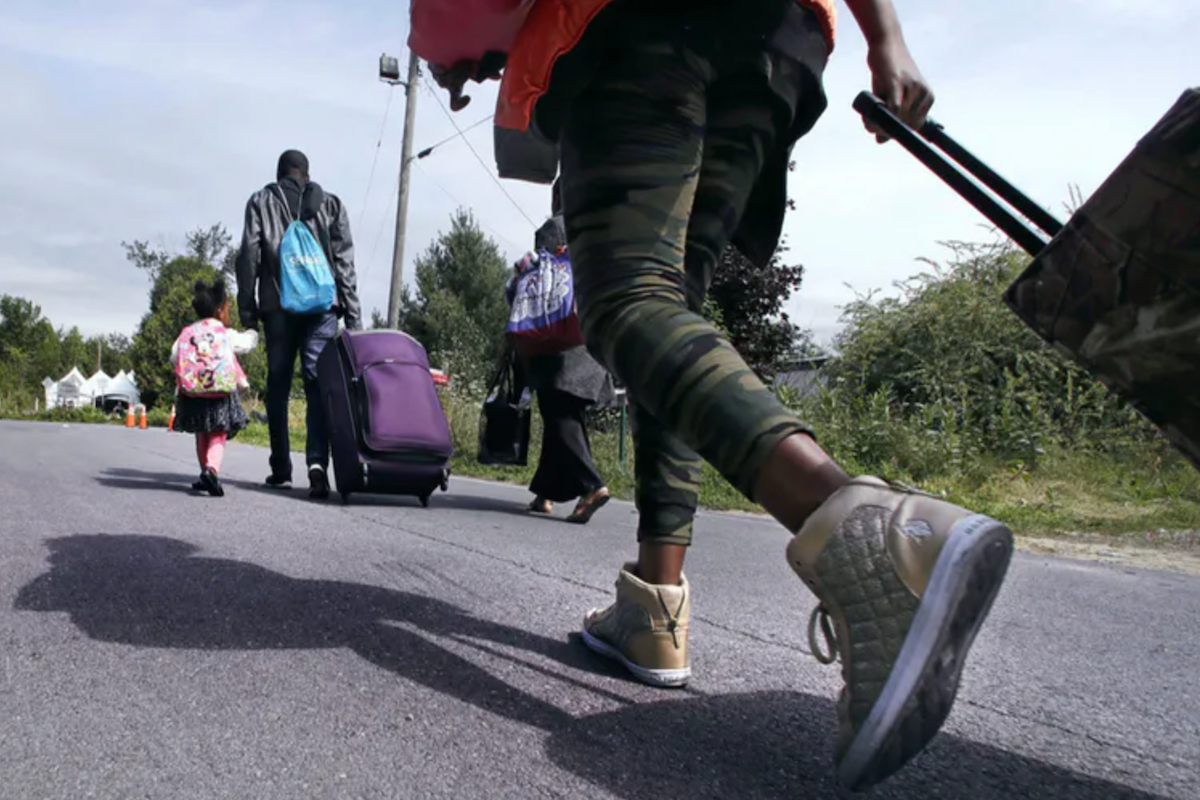 A Congolese family approaches the unofficial border crossing with Canada while walking down Roxham Road in Champlain, N.Y., August 2017. (THE CANADIAN PRESS/AP-Charles Krupa)

By April 2019, the Canadian government rushed through an amendment to the Immigration and Refugee Protection Act. It made refugees ineligible to make a claim if they had already done so in the United States, United Kingdom, Australia or New Zealand. The rush was probably in response to Conservative Party claims that the Liberal government had “failed to effectively manage our border.”

We are a team of researchers conducting interviews with refugees—people originally from El Salvador, Guatemala and Haiti who crossed the U.S.-Canada border to seek refuge, from the 1980s until now. We are building a multimedia educational tool and digital archive called Remembering Refuge: Between Sanctuary and Solidarity. We want to tell the stories of people traditionally forgotten by policy-makers and excluded from official accounts.

This summer we interviewed María (not her real name), originally from El Salvador. María shared memories of her escape from El Salvador to Canada in 1983. She told us she felt compelled to leave her home and country of birth because of the civil war in El Salvador and the country’s oligarch rulers supported by the U.S. government.

In the current life of the Canada-U.S. border, historical accounts of border crossings like María’s are prescient.

María’s story encapsulates the complexity of border crossings and the fraught and entangled histories of the American continent. Her words capture how border crossings become framed as criminal acts.

“I just crossed a border; I didn’t commit a crime,” María said, referring to the brief time she spent in immigration detention in Detroit after her unauthorized crossing of the U.S.-Mexico border. After she was released, María entered Canada as a refugee. She had left her daughter behind for her initial journey but was reunited with her in Windsor about a year later.

Canadian leaders have desperately tried to preserve the country’s image of liberal humanitarianism at our border, but they have instead been confronted with the reality that Canada’s border and immigration history is built upon exclusion, securitization and anxieties related to border management.

In the summer of 2019, the minister of border security at the time, Bill Blair, said: “… We don’t want [refugees] sort of shopping around and making applications in multiple countries. What we’re trying to do is make sure the system is fair and efficient for those who truly do need our protection.”

.@BillBlair said gov't doesn't want asylum seekers "shopping around and making applications in multiple countries." @lloydaxworthy said, "That's an offensive statement…as if somehow they are out there shopping to get in. They're escaping from terror from violence…" #cdnpoli pic.twitter.com/umMK0czYig

The belief that people making refugee claims at the border are somehow “shopping” and taking advantage of an overly generous asylum system is not new.

In 1987, politicians and news media circulated the same rhetoric. At that time, Central Americans were looking to Canada for refuge because U.S. policies had left them without status or were deporting them to conflict zones.

Brian Mulroney’s Conservative government moved to cancel the moratorium on deportations to El Salvador and Guatemala, and imposed visa requirements for nationals from these two countries. He said the decision was a better way to manage the “crisis” at the border.

This was despite the fact that nationals of both countries had a higher than 60 percent acceptance rate. To justify its policy changes, the Canadian government, supported by the news media, relied on stories of systemic abuse by refugee claimants.

Declaring something a crisis authorizes emergency responses. By describing a border as being in crisis, leaders can then ignore the consequences of policies that disproportionately impact those enduring the instability and violence of precarious migration status.

The crisis mentality helps to ensure strong borders. It works to keep the insecurities experienced by people in other places —conflict, war, poverty, environmental disasters— far from Canada’s borders.

Borders are not often understood at the individual level—unless to mourn those who have died or to rage against the caging of children. Much more frequently, the stories told about borders are from the state’s perspective.

When state officials talk of a crisis of irregular arrivals at their borders, they downplay and divert our attention from the other times, spaces and relationships that are present in a given scene from that border. If life histories and the impact of borders in everyday life go unacknowledged, it is easy to reproduce a flattened, two-dimensional understanding of borders.

These understandings lead to the many misrepresentations about how border policies actually work and the motivations behind them. They do not connect how remote these motivations might be from human rights law or humanitarian concerns.

Examples of this include ongoing references to the so-called “loophole” in the Canada-U.S. Safe Third Country Agreement. Related to this is the criminalization of people who cross the border via the routes opened up by the uneven application of this policy.

This has led to a landscape where people who arrive at the border to make asylum claims are often referred to as “shoppers” or “criminals” by politicians—language reproduced in news media. These narratives eschew the reasons for their asylum in favor of the government’s narrative.

The Remembering Refuge projects takes a step outside the “crisis” to focus on the experiences of people who have been displaced multiple times, across multiple state borders. By making connections between these borders and the broader contexts at work, we can see how the legacies of earlier conflicts and displacements reverberate into the present. This includes the ongoing impacts of the Central American refugee crisis that came to a head in the 1980s, displacing María and her daughter.

Remembering Refuge: Between Sanctuary and Solidarity launches in March and is partnered with the University of Lethbridge and supported by a grant from the National Geographic Society.