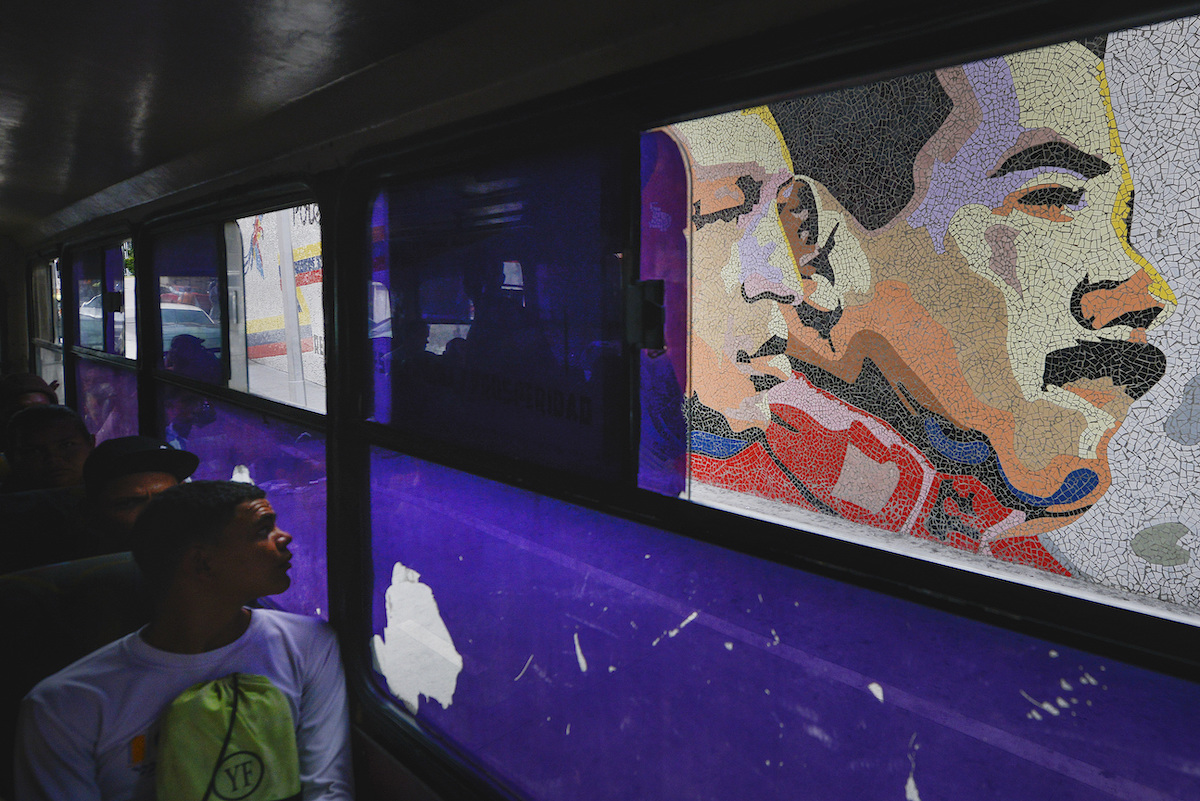 In this December 19, 2019 photo, a man sitting on a bus looks at a mosaic of late leader Hugo Chávez, left, and of Venezuela’s President Nicolás Maduro, right, in Caracas, Venezuela. (AP Photo/Matías Delacroix)

CARACAS, Venezuela (AP) — Some Venezuelans care little about the calls from political leaders, others say they are ready to give their lives to defend their starkly opposed political positions.

The disparity of visions held by Venezuelans and the limited possibilities they can be reconciled create the sensation that an exit from the country’s conflict is far away. To the contrary, everything seems to point toward greater confrontation and a deepening crisis.

The incessant sound of skateboards rolling on the concrete ramps of an extreme-sports park disturbs the harmony of the streets of eastern Caracas’ elegant Altamira neighborhood. One of the park’s frequent visitors is Roger Arellano who divides his daily routine between the graphic design work he does for a tourism company and his passion for skateboarding. 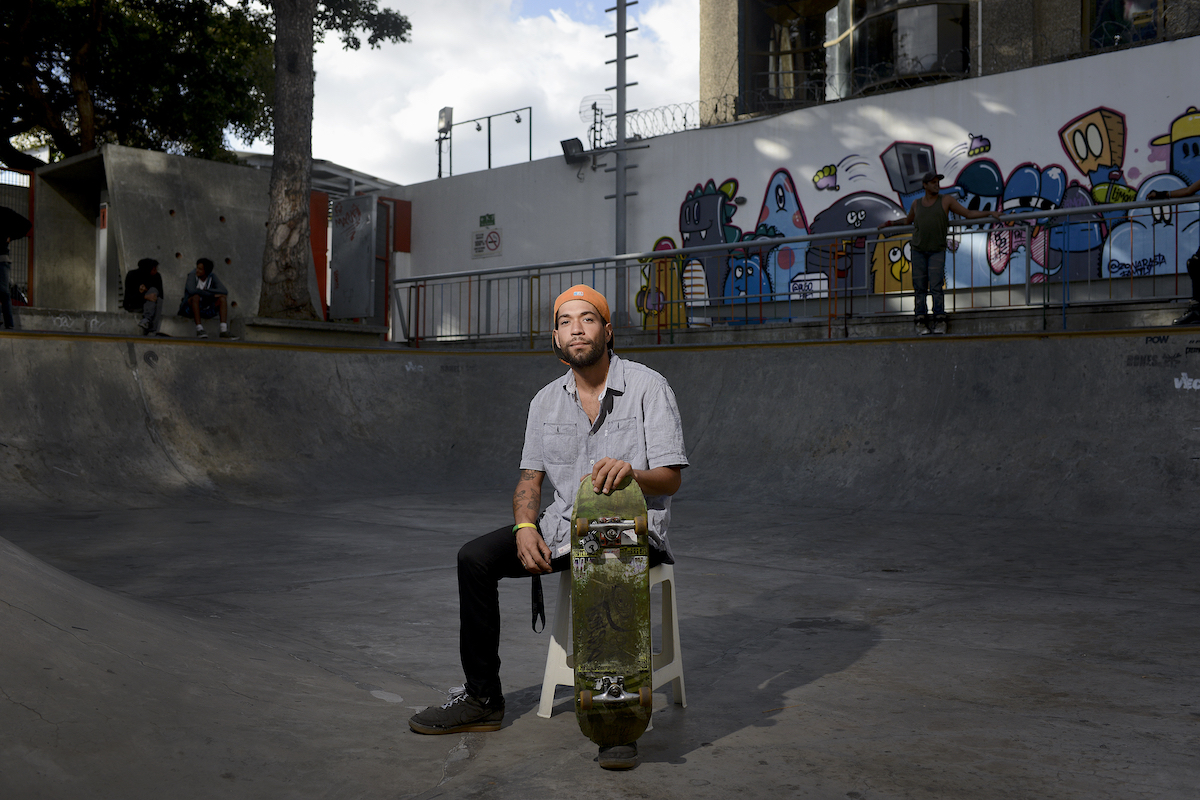 As he watches some of his friends flying around on a skateboard ramp, rising into the air and doing pirouettes on their boards, Arellano acknowledges that he cares little about what is happening in the country. He says with a laugh that “it all rolls off me like my skateboard.”

“If I worry about the country’s problems, I’m not going to have a life of my own. I have to have a life, and my life is skating, working and trying to survive on the $100 I earn each month,” said Arellano, adding that he identifies himself as someone “disappointed in politicians.”

Opinion polls indicate that many Venezuelans, like Arellano, feel disenchanted with politics, a sentiment that has become a problem for opposition leader Juan Guaidó, who after being able to mobilize tens of thousands of people for protests to oust President Nicólas Maduro last year, now draws far fewer into the streets.

“Last year they promised us the country would improve and Maduro would be gone, and there he is,” Arellano said. “How can one believe them?”

Aneli Tomasini, who makes and sells dog biscuits, sat among 30 people gathered for a political meeting organized by several parties in a plaza in Los Palos Grandes, a middle-class neighborhood in east Caracas. She attributed the low attendance to an opposition leadership that “says one thing and then another. 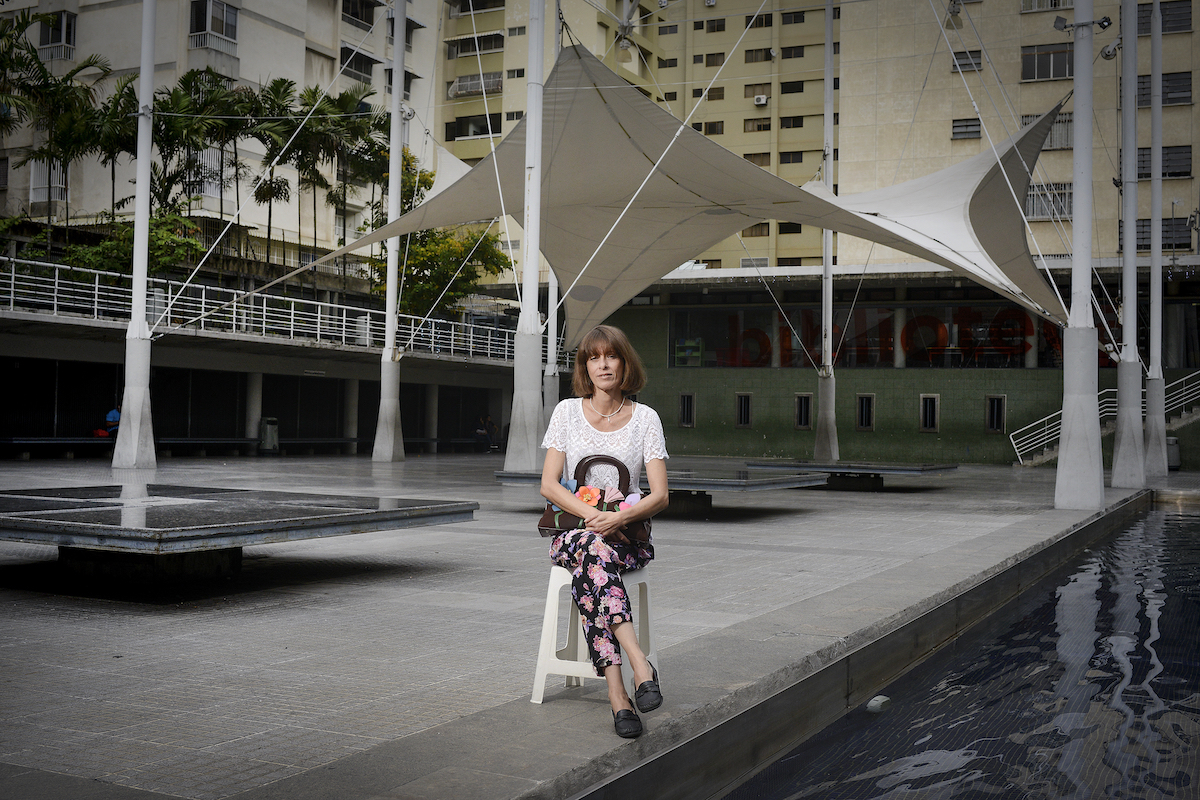 Anelí Tomasini, a 45-year-old mother of two, poses for a portrait in her neighborhood of Los Palos Grandes in Caracas, Venezuela, Friday, January 17, 2020. (AP Photo/Matías Delacroix)

“When they give a really strong and clear message all Venezuelans will return to the streets because we want freedom and peace,” said the merchant, who stopped talking to greet her 8-year-old son who was running about the plaza.

Tomasini says that recent years have been very hard for her because the seven businesses she sold her product to have closed down, forcing her dog biscuit factory into bankruptcy. Adding to her woes, her 24-year-old daughter, pushed by the crisis, migrated to Colombia.

In spite of her difficulties, Tomasini says strongly that she is not going to leave Venezuela because “I am not someone who gives up easily.”

“If I have to give my life so my son can have a free country I will give it,” she says.

At the gates of an old red brick building in the working class 23 de Enero neighborhood in west Caracas, David Romero speaks cautiously into one of the two radios hanging from a small black bag that he carries on his chest. He is an activist with the ruling United Socialist Party of Venezuela and founder of the pro-government Salvador Allende Collective organization. 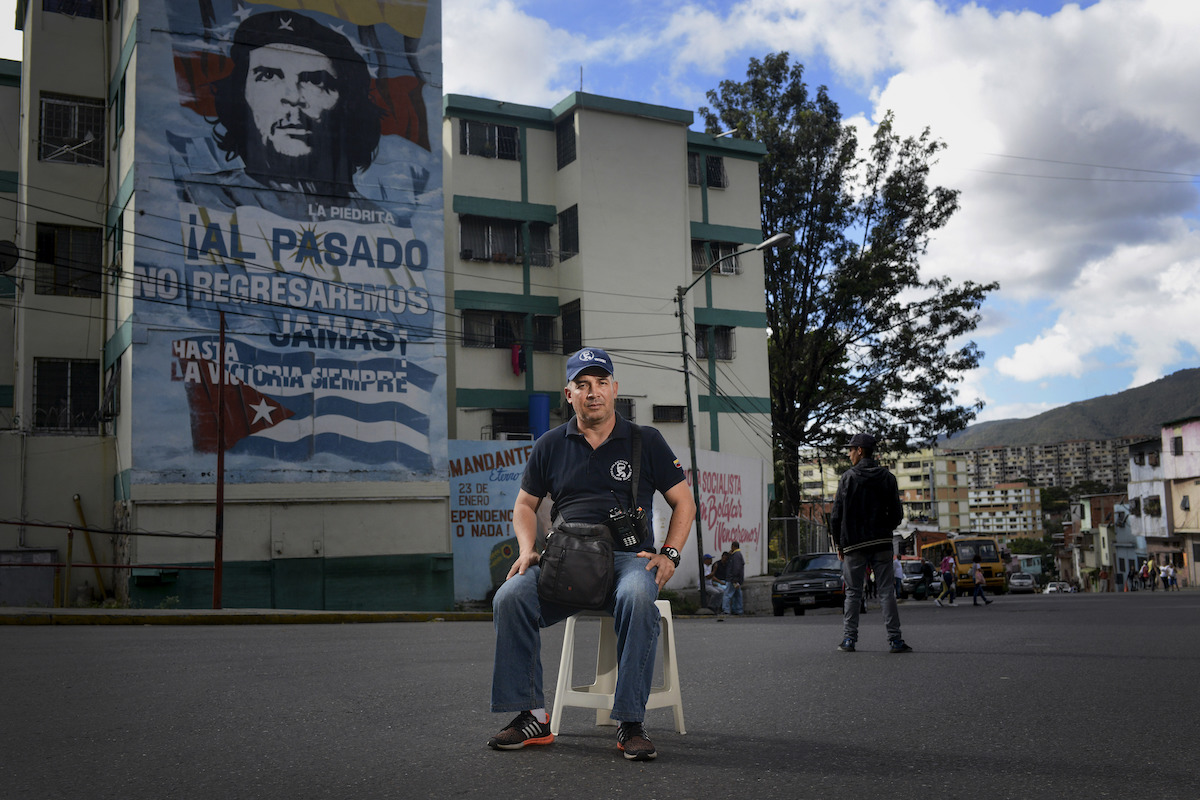 In this January 16, 2020 photo, David Romero, 46, poses for a photo at the 23 de Enero neighborhood in Caracas, Venezuela. (AP Photo/Matías Delacroix)

After finishing his radio conversation, he walks toward a small plaza in front of his building, showing how its perimeter is guarded by members of his organization along with members of the “La Piedrita” pro-government collective.

While Venezuela’s crisis has hit relentlessly at the largely poor areas that are the ruling party’s base of support, Romero expressed confidence that Maduro will be able to resolve the situation and defeat Guaidó’s backers in this year’s congressional elections. He describes Guaidó as a U.S. “puppet.”

The activist acknowledges that he and his family have not escaped the effects of Venezuela’s crisis. He said that his oldest daughter, 25, and three other family members have moved abroad, adding to the wave of millions of Venezuelans who have migrated.

Romero remains confident his family members will return to Venezuela and rejects migrating himself.

“I’m going to stay and struggle here, give my life if necessary for the homeland and the revolution,” he said.