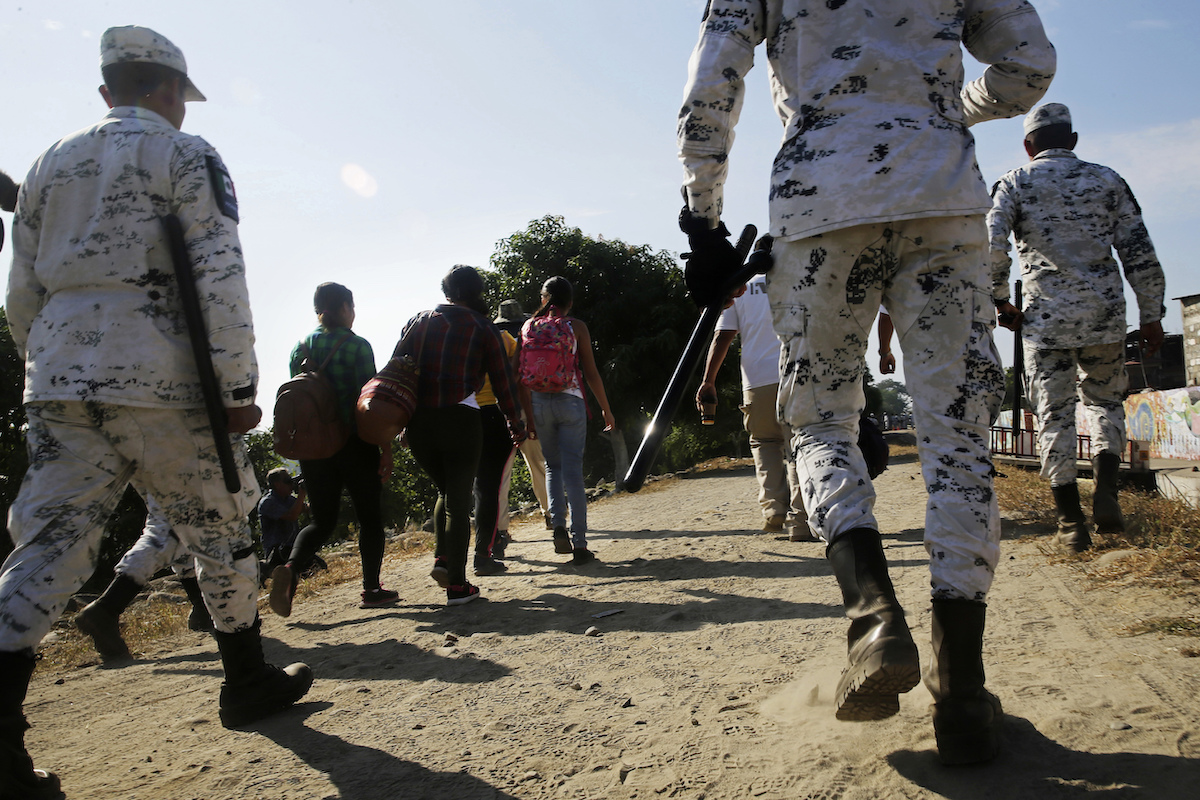 TECÚN UMÁN, Guatemala (AP) — Hundreds of Central American migrants stranded in Guatemala on Wednesday were weighing limited options as to how to make it into Mexico, guarded by troops with riot shields and immigration agents.

The goal of the migrants is to either to live and work in Mexico or continue on toward the United States. To that end, some broke away from their stalled caravan and struck out on their own to cross in small groups at a distance from the Suchiate River border bridge, which forms a chokepoint on the migratory route north from Central America, hoping to avoid patrolling officers.

A woman in Ciudad Hidalgo, Mexico, said she saw 30 to 40 people scamper across to the south of the bridge and make it past security forces early in the morning.

But three young men who tried to evade the National Guard through the low brush were intercepted and sent back to the Guatemalan side.

Those who did make it faced numerous difficulties on the path into Mexico, however, with checkpoints and more patrols searching for and detaining migrants.

“We have seen and confirm that there are groups that have dispersed the length of the Suchiate River, which they try to cross at different border points,” said Father Fernando Cuevas, who runs the Casa del Migrante shelter in the Guatemalan border town of Tecún Umán.

“Nevertheless there is the National Guard in Mexico, there are migration agents, they are aware of it and making detentions at key points,” he continued.

Several hundred migrants were resting on blankets and blue canvas cots on Wednesday across the street from the shelter in a grassy expanse the length of a football field where tents and tarps were set up to accommodate the overflow. On a normal day, the Casa del Migrante receives dribs and drabs instead of the massive flow of thousands seen over the last week, the priest said. 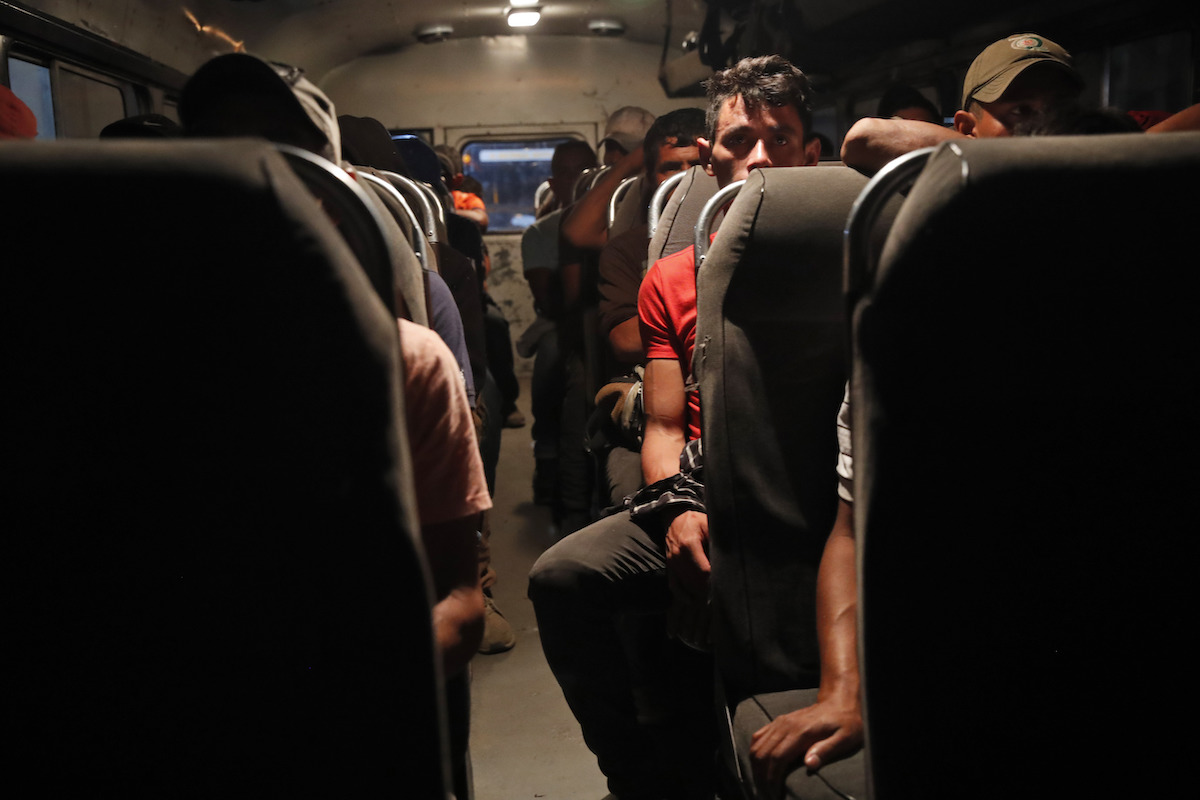 Honduran migrants who have agreed to be returned home, sit on a bus provided by the Guatemalan government in Tecún Umán, Guatemala, Tuesday, January 21, 2020. (AP Photo/Moisés Castillo)

They formed snaking lines —men to one side, women to the other— to receive a hot breakfast of spaghetti with chopped up hot dogs, tortillas, fried plantains and radish-carrot slaw.

There appeared to be as many opinions as to what to do next as there were people in the field.

Miriam Patricia Enamorado, 30, walked and hitchhiked from Santa Bárbara, Honduras, with her 11-year-old daughter starting five days ago only to get stuck at the river after migrants were blocked from crossing in recent days.

She hopes to get to the United States, but is willing to settle for Mexico if she can find work. Unwilling to risk her daughter in a possible new clash with border agents, her plan was now to wait for the official bridge crossing to reopen and formally request refuge in the country.

“It is the dream we all have because our country is no longer livable,” Enamorado said, citing the same problems as others fleeing poverty and gang violence in Central America.

Leonel Suárez, a 29-year-old machine operator from San Pedro Sula, said he hoped an agreement could be struck with Mexican authorities for the migrants to proceed, but absent that he wouldn’t rule out another attempt to cross en masse. A similar previous attempt ended in scuffles, rock-throwing, detentions and most of the migrants withdrawing back to Guatemalan soil.

“We would try again to see if we manage to pass, but not aggressively,” Suárez said, adding that he sees trying to cross quietly in small groups as a sure way to get caught.

As a few dozen migrants splashed and bathed in the shallows of the Suchiate, soaping themselves from head to toe and rinsing off, Mexican agents observed calmly from the other bank. Dozens more lazed in the shade, ready to snap to attention with riot shields if necessary but more at ease than during the confrontations of recent days. Drones buzzed over the river at several points providing an eye in the sky.

The typical cross-river commerce of bundles of goods like soda, milk, cereal, shampoo and toilet paper recovered some of its normality, although at least one Tecún Umán local was turned back when he tried to make it to a day job in Mexico.

Critics believe the crackdown by Mexican authorities, applauded by Washington, will have only one result: lining the pockets of “coyotes,” or people smugglers. 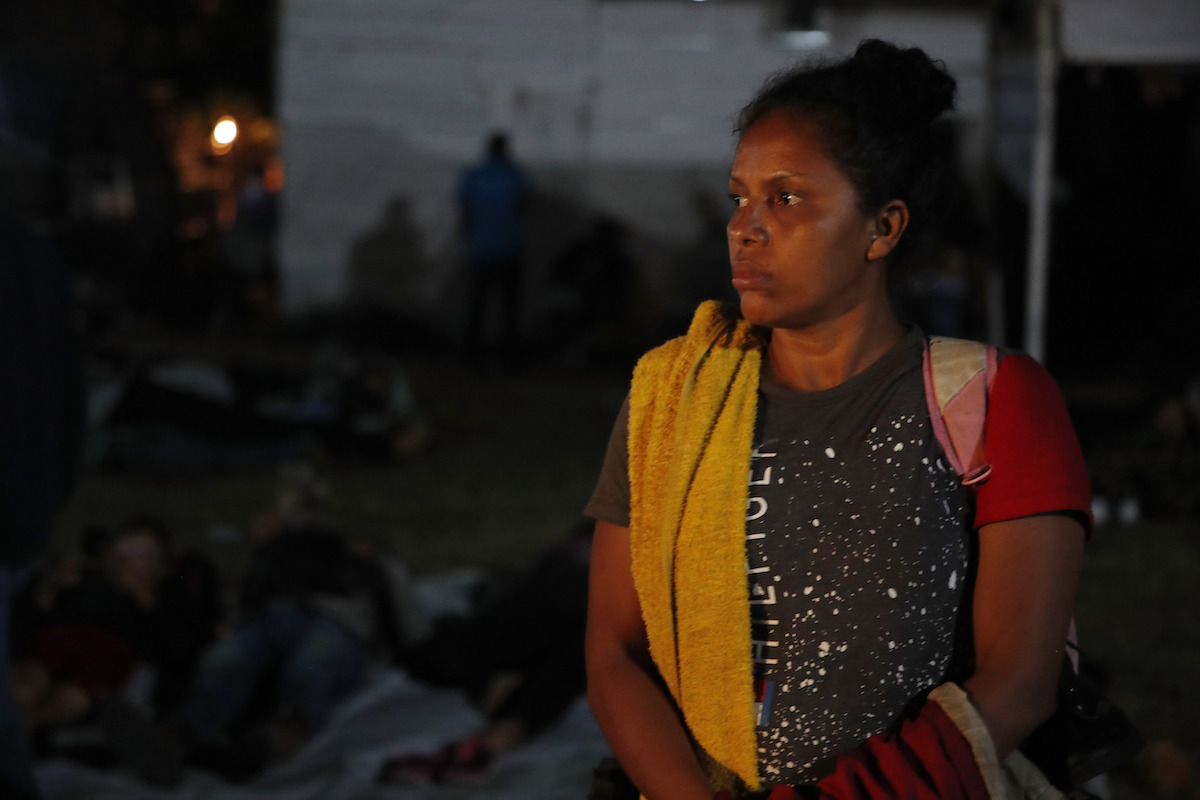 A Honduran migrant who has agreed to be returned home, prays before boarding a bus provided by the Guatemalan government in Tecún Umán, Guatemala, Tuesday, January 21, 2020. (AP Photo/Moisés Castillo)

Mexican President Andrés Manuel López Obrador touted the success of his government’s strategy Wednesday, noting that many of the migrants had begun to voluntarily return to their countries.

“The efforts by the Mexican National Guard and other officials have thus far been effective at maintaining the integrity of their border, despite outbreaks of violence and lawlessness by people who are attempting to illegally enter Mexico on their way to the United States,” Wolf said. He said DHS was monitoring the caravan closely and had dozens of personnel assisting throughout Central America.

The AP saw U.S. Immigration and Customs Enforcement agents working with Guatemalan police at highway checkpoints last week as caravan members passed. The U.S. said they were there to help train and support local agents.

“They absolutely must be satisfied with [Mexico’s[ actions because in reality it’s their [the United States’] plan,” said Guadalupe Correa Cabrera, a professor at George Mason University who is investigating how caravans form.

She said it is an complicated issue for Mexico, but the National Guard had no business being placed at the border to handle immigration because they weren’t trained for it.

Mexico announced last June that it was deploying the newly formed National Guard to assist in immigration enforcement to avoid tariffs that Trump threatened on Mexican imports. 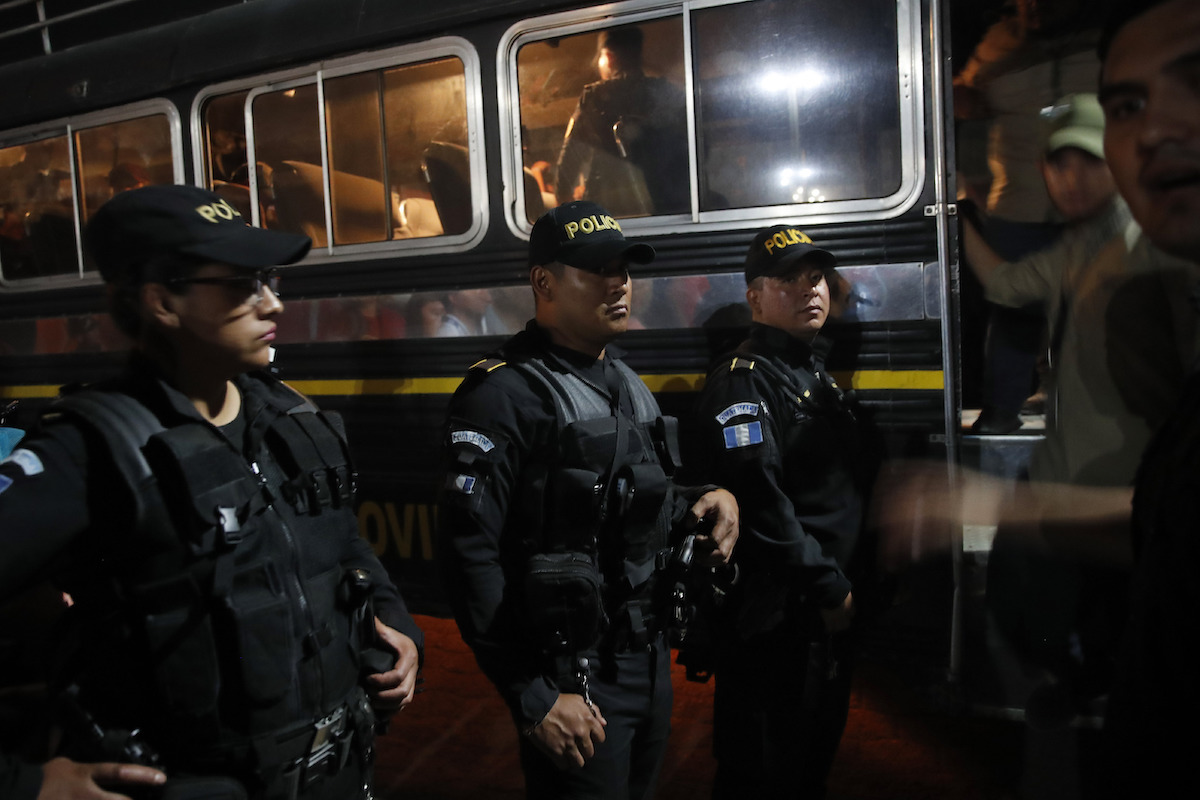 Police agents stand on guard as Honduran migrants who have agreed to be returned home, board a bus provided by the Guatemalan government in Tecún Umán, Guatemala, Tuesday, January 21, 2020. (AP Photo/Moisés Castillo)

The number of migrants stuck at the Guatemala-Mexico border continued to dwindle Wednesday as detentions, resignation and splintering eroded the caravan’s cohesiveness.

Overnight the first repatriation buses left Tecún Umán with dozens on board, and on Tuesday Mexico began flying and busing hundreds of migrants who had crossed to that country back to Honduras.

More southward-bound buses were expected Wednesday, and already the number of people outside the Casa del Migrante in Tecún Umán was perhaps half of what it was at its peak Sunday night.

Walter Basilio, a 40-year-old from Cortés, Honduras, was one of those who decided to board a bus.

“It’s really [difficult] to cross to the other side now,” he said, wary of getting beaten up if there’s another clash. “Better to go home.”

While the caravans of recent years have garnered attention, they represent just a fraction of the normal migratory traffic moving from Central America up through Mexico.

Mexico’s National Immigration Institute said Wednesday that more than 2,000 Central Americans had been detained at inspection points in the southern border states of Chiapas and Tabasco the previous day . It did not say how many may have been part of the caravan.