Protesters Call for Puerto Rico Governor to Step Down 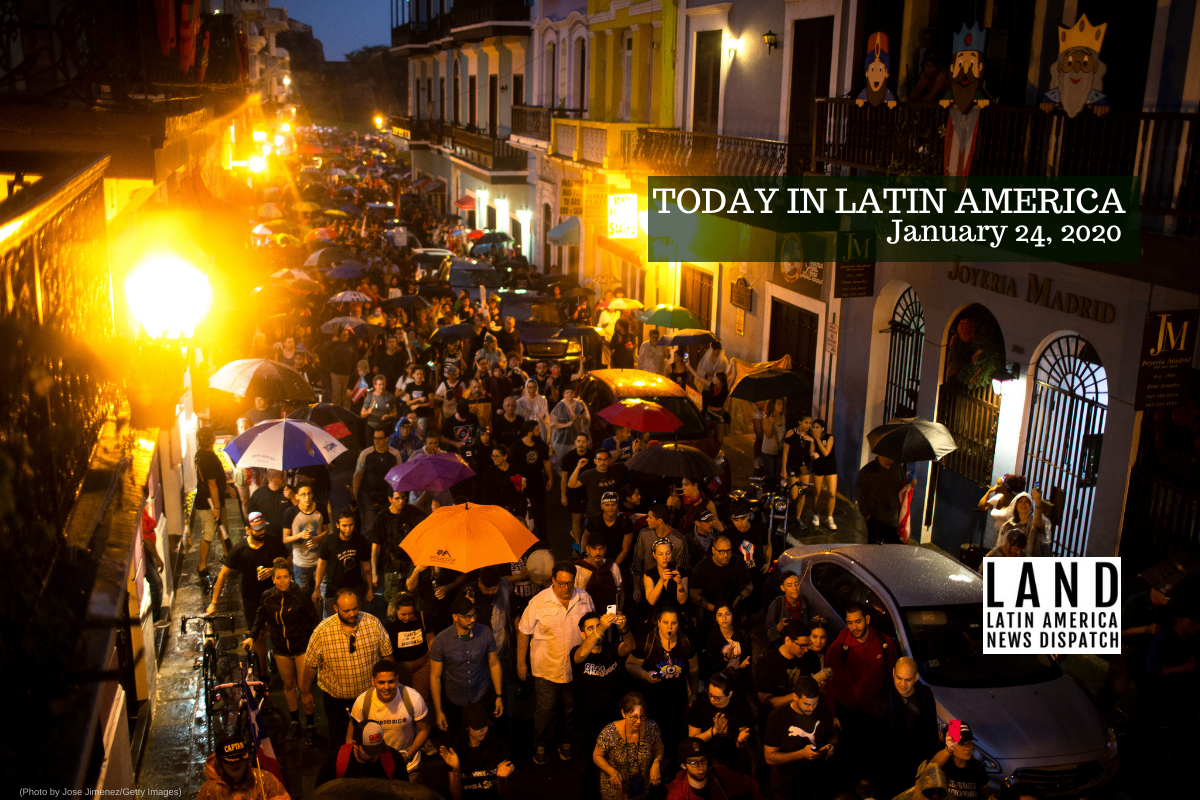 PUERTO RICO: Several hundred Puerto Ricans protested outside the Capitol building in San Juan on Thursday and marched to the governor’s residence, known as La Fortaleza. They criticized Gov. Wanda Vázquez’s response to the recent earthquakes and the discovery of unused emergency aid. Protesters called for Vázquez’s resignation while banging on pots and pans.

The mayor of San Juan, Carmen Yulín Cruz Soto, marched on Thursday and told El Nuevo Día, “The negligence here is coming from Wanda Vázquez and her government… The people are fed up.”

BRAZIL: Brazil’s primary budget deficit could be completely eliminated by 2022, bringing almost a decade of shortfalls to an end, a senior Economy Ministry official said on Thursday. The government’s interest payment bill on the national debt could fall by $100 billion by the end of the current four-year term. If economic reforms accelerate growth further, public finances could be even stronger, special secretary of the Economy Ministry Waldery Rodrigues told journalists in Brasilia. Rodrigues expects Congress to approve three of the government’s main economic reforms this year: the complex tax reform, administrative reform and “fast track” privatization bills.

URUGUAY: Possible changes to the Criminal Procedure Code have alarmed prosecutors around the country. Mirta Morales, president of the Association of Fiscal Magistrates of Uruguay, told El Observador that several prosecutors contacted her when they found out about the proposed reforms. President-elect Luis Lacalle Pou is taking a bill to Parliament for immediate consideration. The proposal contains 457 article amendments to the Code enacted in November 2017. “What is certain is that the rules of the game will be modified,” Morales said.

COLOMBIA: A former midfielder for Colombia’s national soccer team was extradited to the United States on Thursday, where he will be tried for drug trafficking charges, the Associated Press reports. Prosecutors in Texas accuse Jhon Viafara of conspiring with members of the Gulf Cartel to export cocaine off the coast of Colombia on speedboats. His extradition follows a three-year investigation. Viafara played for 10 clubs during his career including Premier League sides Portsmouth and Southampton.

VENEZUELA: Opposition leader Juan Guaidó said he wants the European Union to broaden sanctions against members of the Venezuelan government, speaking on Wednesday in Brussels.  He also told the Associated Press that he hopes to meet with President Donald Trump in Washington D.C. “We are making all efforts to align as many agendas as possible,” he said in an interview. “We don’t rule it out. We are looking for a space.” About 60 nations currently back Guaidó in his attempts to push toward free presidential elections in Venezuela. This week, his team will try to schedule meetings with foreign heads of government.

JAMAICA: U.S. Secretary of State Mike Pompeo visited Kingston on Wednesday to meet with Caribbean leaders and discuss U.S. policy towards Venezuela. The prime ministers of Barbados and Trinidad and Tobago boycotted the meeting, citing concerns that the U.S. was seeking to divide the Caribbean. At a meeting with leaders from the 15-country bloc Caricom, Pompeo promoted the re-election of Luis Almagro, who has called President Nicolás Maduro a dictator, as President of the Organization of American States.

NICARAGUA/UNITED STATES: U.S. Secretary of State Mike Pompeo joined a roundtable discussion with Florida Gov. Ron DeSantis and members of Florida’s Venezuelan community in Miami yesterday, one day after Florida lawmakers voted to condemn Nicaraguan President Daniel Ortega. Pompeo told the Associated Press that DeSantis had invited him to talk about developing Florida’s economic relationship with Central America and “about the opportunities and challenges that are presented from the tyranny that is taking place both in Venezuela and Cuba.” Pompeo has recently been traveling in Latin America, and spoke with Nicaraguan opposition leaders earlier this week.

GUATEMALA: Minister of Foreign Affairs Pedro Brolo announced Wednesday that Guatemala will continue to receive Honduran and Salvadoran asylum seekers from the United States under its new government. Newly elected President Alejandro Giammattei agreed to uphold the asylum deal that his predecessor Jimmy Morales had signed after reviewing documents provided by the United States. Guatemala has received more than 230 asylum seekers since entering into the agreement in November.

MEXICO/GUATEMALA: A caravan of Central American migrants crossed the Suchiate river between Guatemala and Mexico yesterday. This followed several days of tension between Mexican immigration agents and National Guard members and hundreds of predominantly Honduran migrants. After crossing into Mexico, the caravan stopped about 6 miles north of the border town Ciudad Hidalgo, where security forces awaited the group. José Luis Morales, a leader of the caravan, told the Associated Press that federal authorities had asked the migrants to turn themselves in to be processed as refugees.