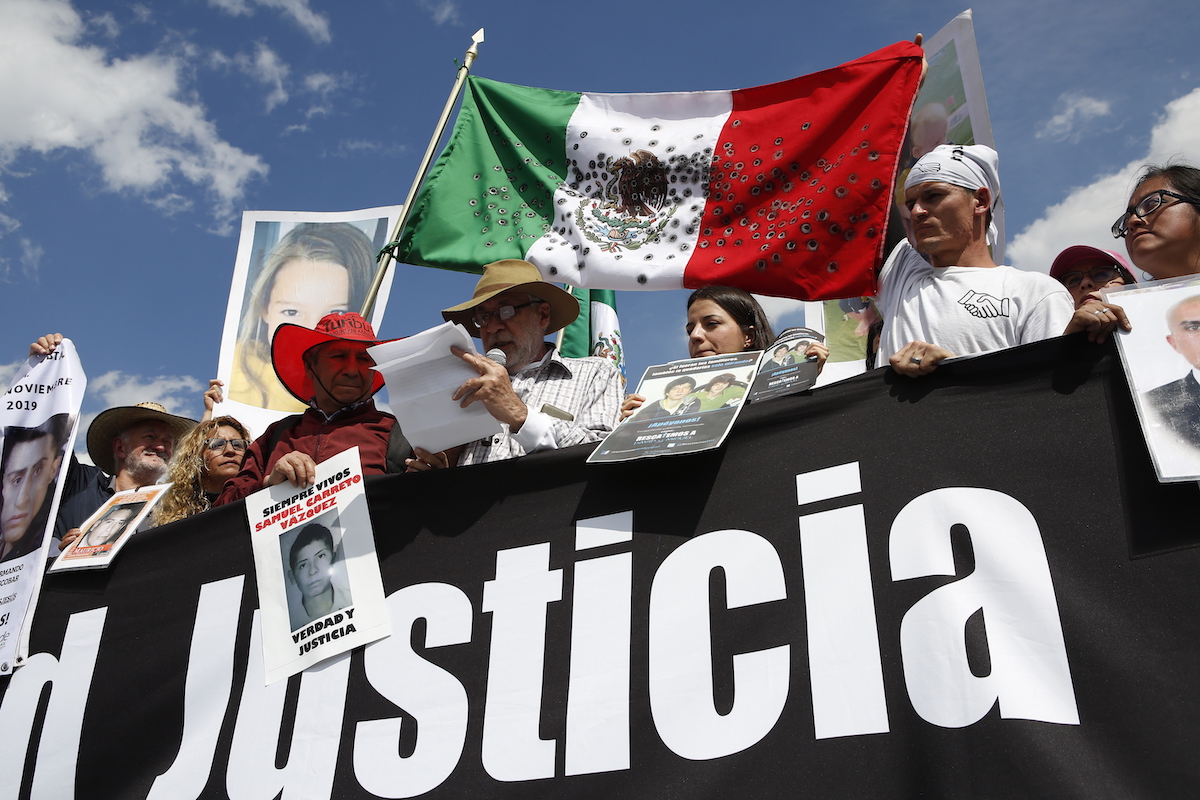 Poet and activist Javier Sicilia speaks after a march against violence called “Walk for Peace,” in Mexico City, Sunday, January 26, 2020. Sicilia, accompanied by more than a hundred members of the LeBarón family, led his second march against violence in Mexico, with the group gathering supporters as it made its way towards Mexico City’s main square the Zócalo. (AP Photo/Ginnette Riquelme)

MEXICO CITY (AP) — A four-day pilgrimage by family members of murdered or missing Mexicans culminated in a tense confrontation in the capital’s main square Sunday as supporters of Mexico’s president hurled insults at the families—including dozens of Mormons with dual U.S.-citizenship.

Fervent followers of President Andrés Manuel López Obrador swarmed the Caravan for Truth, Justice and Peace as it neared the National Palace with the intention of leaving a letter for the president. “Leave the country!” they yelled, accusing the victims’ families of being provocateurs or having been paid off by political opponents of the president.

The hostilities underscored the difficulties of bringing peaceful solutions to a country shaken by frequent and brutal killings that often go unpunished.

There were nearly 35,000 homicides in Mexico last year—a record high for the country and a disappointing figure for López Obrador’s first full year in office. That works out to a rate of roughly 23 killings per 100,000 people, compared with five per 100,000 in the United States.

Tens of thousands more Mexicans have gone missing over the past decade, with few clues as to their final resting places and little help from authorities in tracking them down.

Members of the LeBarón Mormon community in northern Mexico lent their voice to the protest Sunday. Their settlement was upended in November when gunmen ambushed a convoy traveling on a rugged mountain road a few hours drive south of Arizona. Three American women and six of their children were killed.

The LeBarón community traces its origins to a polygamist group that left the U.S. for Mexico several generations ago, after the Mormon Church banned plural marriage.

Adrián LeBarón lost a daughter and four grandchildren in the November attack. Before the slayings, he said, he was like an ostrich with its head buried in the sand—”unaware of the massacre taking place in Mexico.”

“Now, I have lifted my head to never bury it again,” LeBarón said. 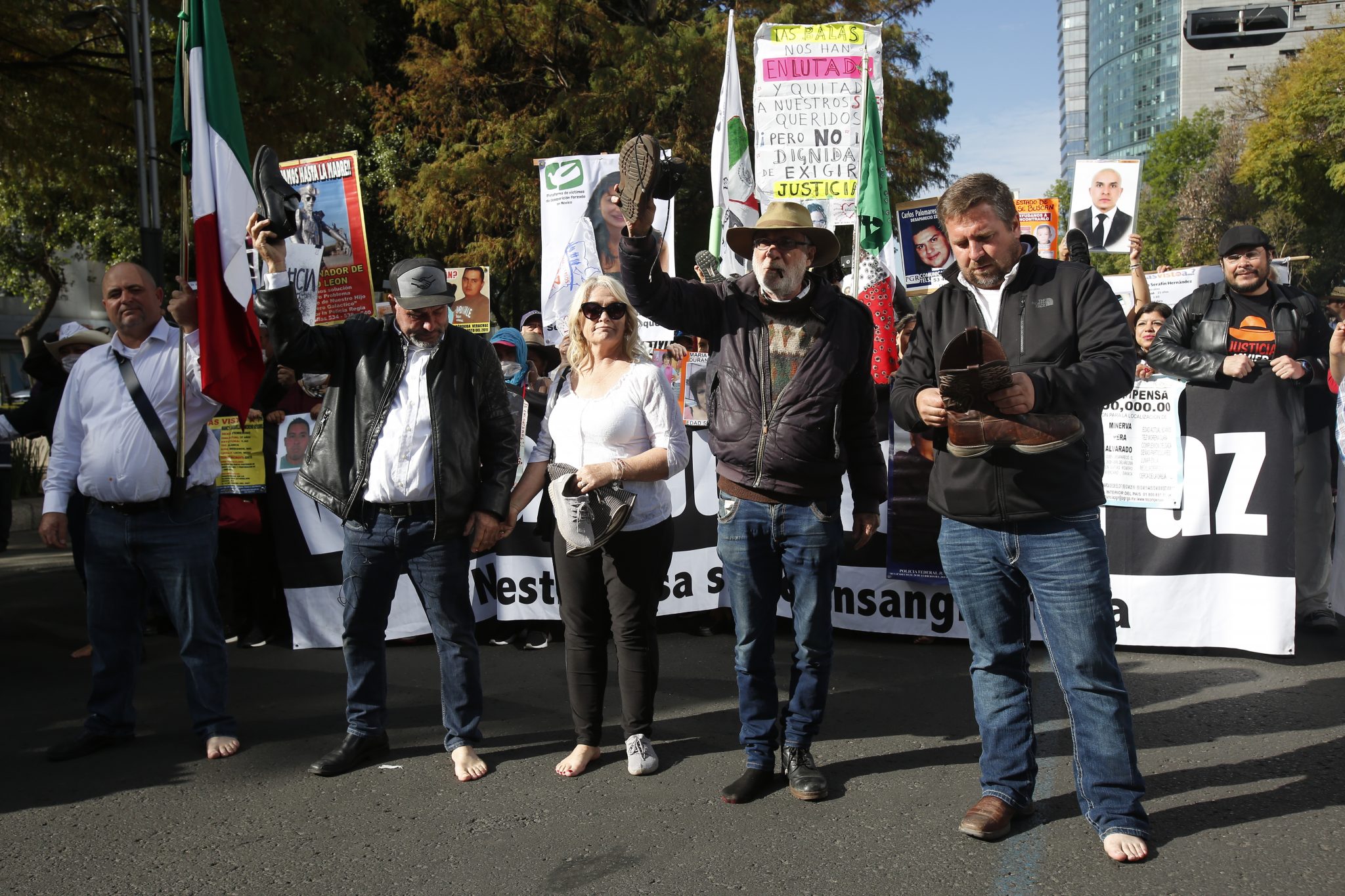 Members of the LeBarón family and activist and poet Javier Sicilia take off a shoe in memory of a LeBarón child who walked barefoot for miles to safety after an ambush on November 4, 2019, that killed several family members, during a march against violence called “Walk for Peace,” in Mexico City, Sunday, January 26, 2020. (AP Photo/Ginnette Riquelme)

Critics have accused LeBarón of seeking attention. He said staying silent would be an insult to the memory of his daughter and grandchildren and counterproductive for the hopes he has for Mexico to be a safer place.

“It would bring me shame to not give a face to a tragedy like this,” LeBarón said.

Lenzo Widmar, another member of the LeBarón community, encouraged those walking in the protest march to remove a shoe in honor of 9-year-old Mackenzie, a survivor of the attack on the Mormons who trekked more than 10 kilometers (six miles) semi-barefoot to summon help for her wounded siblings.

Widmar said marches like the one in Mexico City are an opportunity to draw attention to the many other cases of slain and missing people in Mexico that fail to draw much attention from the media, or even a proper investigation by police.

Walking in the procession were women like María Alicia Guillén, whose 6-year-old son, Eduardo, vanished without a trace while playing marbles outside their home in the southern state of Chiapas in 2012, and María del Carmen Volante, whose 23-year-old daughter, Pamela, was last seen at a music festival on the south side of Mexico City more than two years ago.

“All of us Mexicans have to look to see where we are responsible for this,” said Widmar. “It’s an embarrassment that we have this much violence in Mexico.”

As the procession advanced, trudging in silence for hours toward the presidential palace, it paused at “anti-monuments” positioned along Paseo de la Reforma, the capital’s premier boulevard, to mark searing tragedies.

Marchers shouted “Truth! Justice! Peace!” next to a pastel-colored structure marking the deaths of 49 toddlers and infants in a fire at a government daycare center and for which no one has been declared liable. 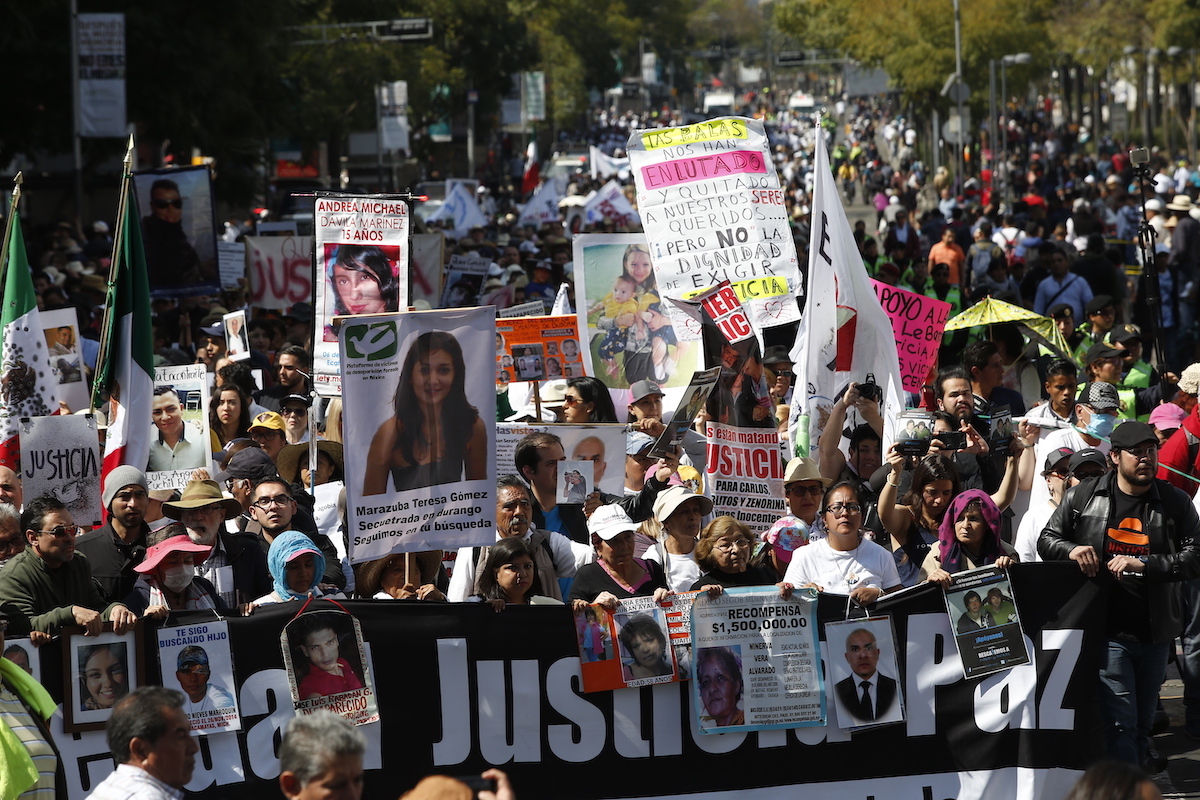 People walk with members of the LeBarón family and activist and poet Javier Sicilia during a march against violence called “Walk for Peace,” in Mexico City, Sunday, January 26, 2020. (AP Photo/Ginnette Riquelme)

Then they paused to count to 43 next to a metal installation that sits at an intersection to recall the college students of Ayotzinapa who were abducted and purportedly killed by a drug cartel working in cahoots with police.

Farther along, more than a dozen mothers of missing young men waited for the procession while holding images of their boys with personal details, such as a puma tattoo on the left forearm. The mothers chanted: “Son, listen. Your mother is in the fight.”

All along the route, supporters shouted to the extended LeBarón family: “You are not alone!”

But when the marchers reached the central Zócalo plaza, hundreds of the president’s supporters briefly blocked their path while chanting phrases like: “It’s an honor to be with Obrador” and “Get out!”

LeBarón responded from a platform while speaking into a microphone that the caravan was made up of human beings of all political stripes.

“This is a call for conciliation,” he said, his voice breaking with emotion. “Peace is born in the heart.”