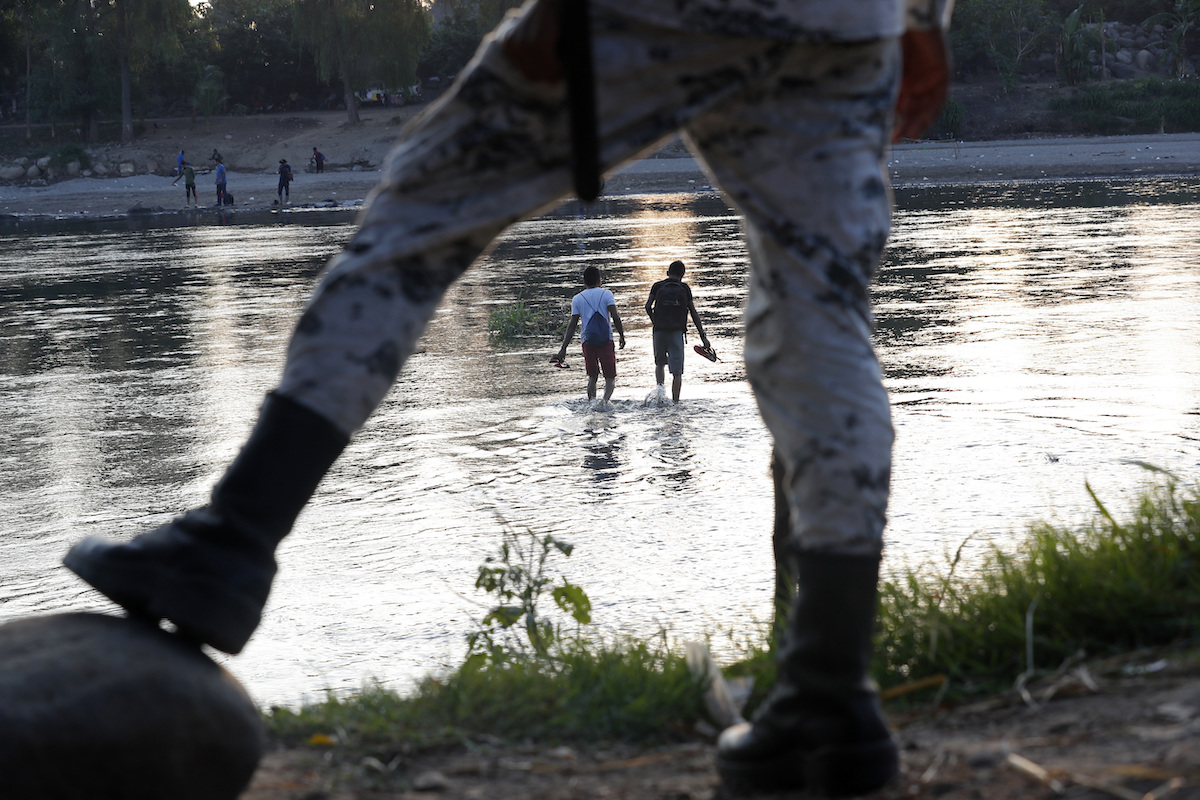 Mexican National Guards stand along the Mexican side of the bank of the Suchiate River near in Tecún Umán, Guatemala, Tuesday, January 21, 2020. (AP Photo/Marco Ugarte)

MEXICO CITY (AP) — President Andrés Manuel López Obrador said Friday that he expects more caravans of Central American migrants and asylum seekers to emerge, but he sees the phenomenon which became a political football in the United States in recent years as waning.

A week after armored National Guard troops and immigration agents broke up what was left of the most recent caravan in southern Mexico, loading men, women and children onto buses for likely deportation, López Obrador suggested that fewer will come in future groups.

“Surely they are organizing other caravans…. Only each time they have fewer migrants,” he said. “There is more and more information.”

Hours earlier a group numbering in just the low dozens set out before dawn from the bus terminal in San Pedro Sula, Honduras, in response to the latest call for a caravan, a far cry from the kind of numbers seen previously.

Mexico has made clear that it will no longer allow large caravans to pass through its territory, following intense pressure and threatened trade tariffs from Washington last year.

Early caravans beginning in late 2018 were largely permitted passage, at times receiving humanitarian aid and transportation from local communities and governments. But now Mexico has thousands of National Guard troops deployed to support immigration enforcement, and Guatemala, too, returned hundreds from the most recent caravan to Honduras.

When negotiations with a de facto spokesman for the caravan broke down along a highway in the southern state of Chiapas last week, Mexican guardsmen banging batons against riot shields advanced and engaged. There was shoving and pepper spray in the chaos. Many sobbed as they allowed themselves to be escorted to the buses, while others fled or resisted and were cornered or subdued.

López Obrador on Friday praised the troops, saying, “The National Guard behaved very well. It resisted, it held firm, it did not give in to provocations.”

The president also said there were no human rights violations. Some human rights groups have expressed concerns about the operation, including the detention of children and other vulnerable people in the caravan.

López Obrador said 5,000 people from its various splinters, most of whom were from Honduras, had been returned home. He alleged that they had been “lied to” about a supposed agreement for them to advance through Mexico to the U.S. border.

Local “shelters” —the government’s term for immigration detention centers— were currently at about half capacity, the president said.

López Obrador added that authorities are pleased to be seeing fewer women and children migrating compared with previously.

He also criticized what he called leaders “without any convictions, some of them conservatives disguised as progressives [and] supposedly defenders of social causes” such as the environment, labor and indigenous rights.

López Obrador’s comments follow a week of tension between his government and migrants’ advocates over a series of mixed signals and orders that initially barred social and religious organizations from accessing migrant detention centers.

More than 40 groups denounced what they called the government’s “erratic” policies and expressed concern that their work with detained migrants could be harmed.

Late Thursday the National Immigration Institute, a federal entity, said it had been in contact with NGOs and that they could once again have access to the detention centers. It added that it would meet with the National Guard “to learn about its protocols for acting in migration control.”

On Wednesday, López Obrador had criticized the directive from his own immigration agency on temporarily barring access.