Guaidó Rallies Venezuelan Expats in Miami at End of Tour 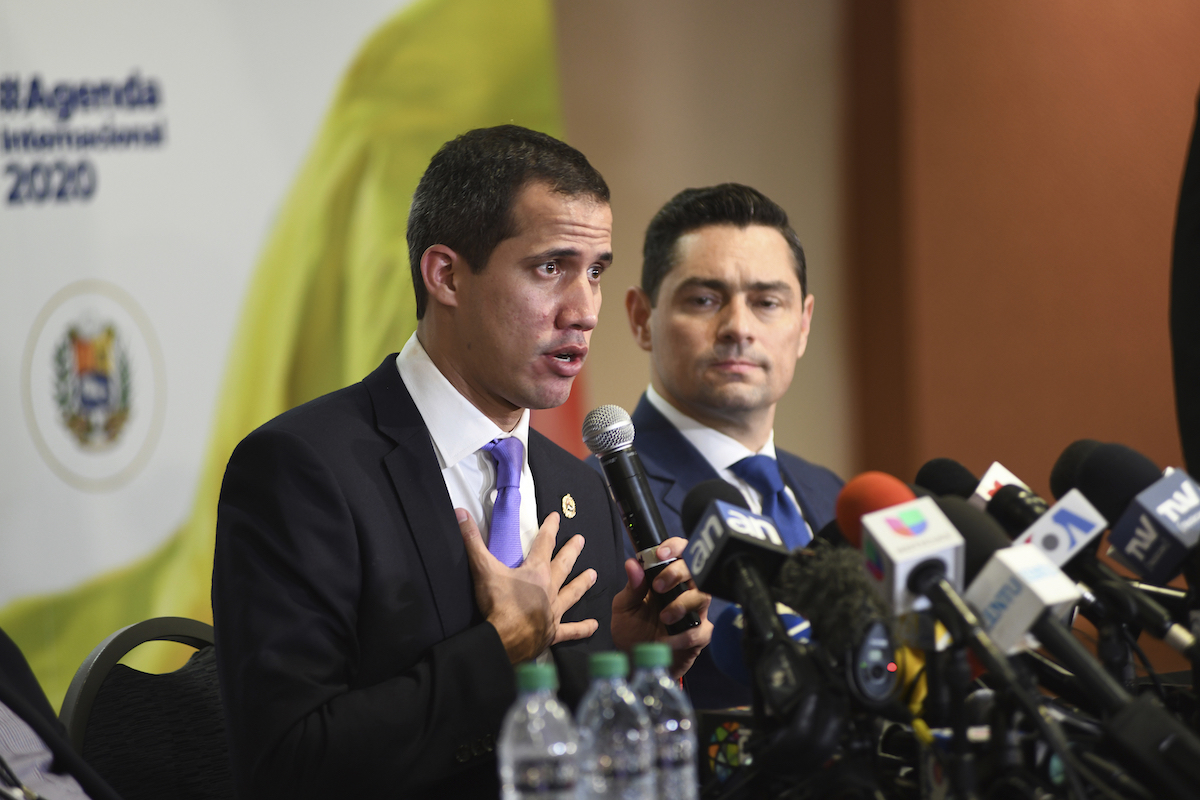 MIAMI, Florida (AP) — Venezuela’s Juan Guaidó told a large crowd of cheering expatriates in Miami on Saturday that he will soon make his return to Caracas from an international tour, bringing with him the “world’s backing” to oust President Nicolás Maduro.

“We have a plan. We have a strategy,” Guaidó said. “We’re not alone, and we’re going to restore democracy.”

The opposition leader bent on unseating the socialist president, however, presented few details for executing this plan upon returning, referring to additional sanctions as a major strategy available.

Guaidó’s visit to Miami rounds out a two-week world tour that took him first to Colombia, then across Europe and Canada, where he held meetings with a list of world leaders. He delivered a message that Venezuelans are pressing for freedom from a “dictator,” but they need help.

A key meeting absent from Guaidó’s trip was with his most important ally, President Donald Trump, who earlier in the day tweeted a picture of himself golfing at his Florida Mar-a-Lago club, saying he was “Getting a little exercise.”

When asked about a possible meeting with Trump, Guaidó said: “Stay tuned,” but he also said he was already preparing his return to Venezuela.

An estimated 3,500 people crowded into a Miami convention center to hear Guaidó, the most promising opposition political figure to surface in years with the chance of ending two decades of rule launched by the late President Hugo Chávez. Guaidó urged the crowd to remain unified and to resist, despite living away from Venezuela.

“All options are on the table, but also under the table,” Guaidó said. “There are things that are not talked about. All necessary actions will be used to finally liberate Venezuela.”

Venezuela was once an energy powerhouse with the world’s largest oil reserves, but crude production has plummeted over the last two decades, which critics blame on corruption and mismanagement.

Today, an estimated 4.5 million Venezuelans have emigrated from the country of 30 million, leaving behind crumbling infrastructure, broken hospitals, power failures and gasoline shortages with mile-long lines at filling stations across much of the South American nation.

Guaidó, 36, rose a year ago to prominence, named leader of the opposition-led National Assembly. In this position he claimed presidential powers, vowing to oust Maduro and reverse the political and social crisis.

He won backing from the U.S. and nearly 60 nations that considered Maduro’s 2018 election a fraud and blamed his socialist policies for the crisis that’s driving mass migration and threatening the region’s stability. 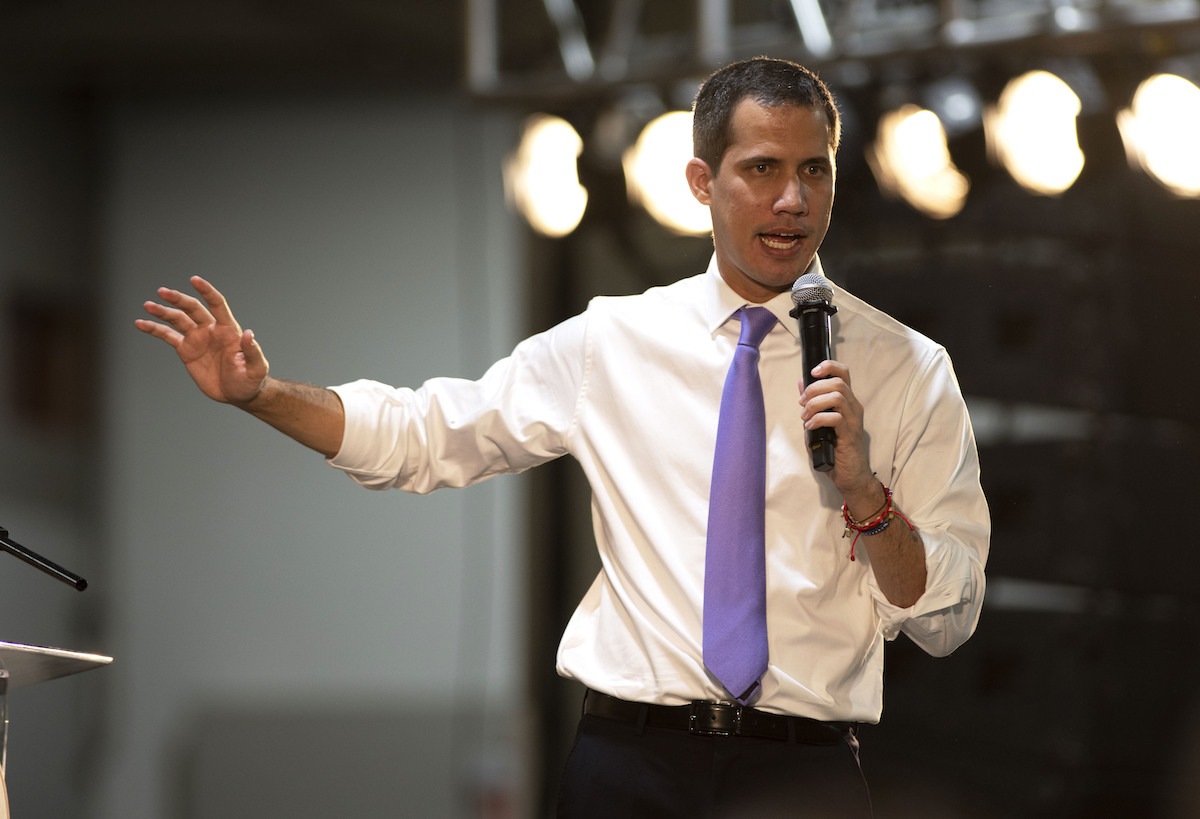 Juan Guaidó speaks at a rally in Miami, Saturday, February 1, 2020 as he finishes an international tour. (AP Photo/Gastón De Cárdenas)

Maduro, however, has maintained power with firm backing of the military and key foreign allies, including China, Cuba and Turkey. Russian Foreign Minister Sergey Lavrov is expected to visit Caracas in the coming days.

Before the rally, Guaidó met with James Story, chargé d’ affaires for the Venezuela Affairs Unit of the U.S. Embassy in Bogotó, Colombia. The opposition leader also mingled with Venezuelans who have fled their homeland for the United States over the last two decades.

Florida Republican Sen. Rick Scott was among those on stage with Guaidó as well as several Venezuelan lawmakers now living in exile. Florida Sen. Marco Rubio said on Twitter that he met with Guaidó.

I look forward to seeing him again in a free #Venezuela pic.twitter.com/4LleZg6Fyo

Many at the rally wore baseball hats with bright yellow, blue and red, representing the colors of Venezuela’s flag. When Guaidó stepped on stage, they cheered and held up their phones for photos.

“We want him to tell us what’s going to happen,” said Gloria Bejaramo, 65, who traveled from Venezuela to South Florida to visit a daughter. “I’ve always supported him, and everyone is looking for a way out of this situation to achieve democracy.”

Native Venezuelan Jorge Márquez, 30, traveled with two friends from his adopted home in Houston to Miami to show their support for Guaidó.

“We’re a people who don’t give up, don’t rest,” said Márquez, who said he protested against socialist rule as a university students in Venezuela before arriving to the United States in 2014 requesting political asylum.

Guaidó launched the international tour, defying a travel ban imposed against him by Maduro’s government.