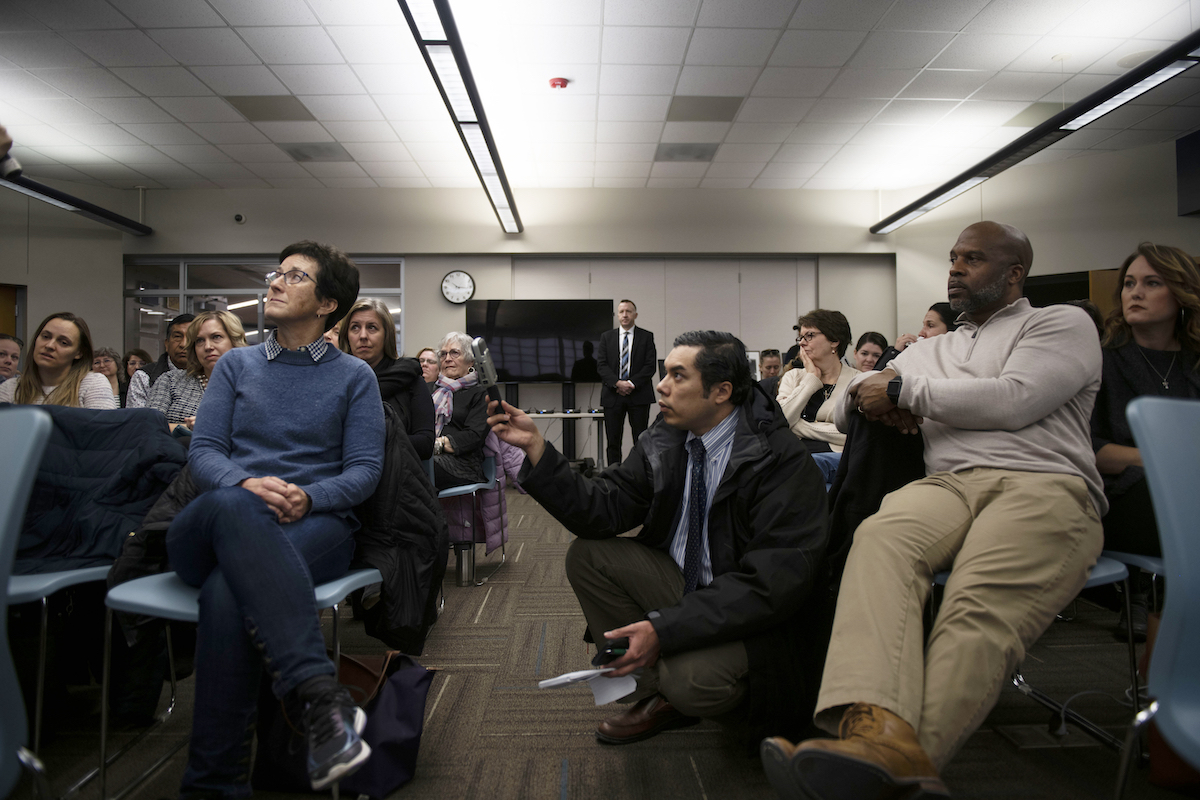 Parents discuss their experiences and opinions on racism in the Saline community and schools during a school diversity and inclusion meeting community meeting at Liberty School in Saline, Mich., Monday, February 3, 2020. The meeting was hosted by Saline Area Schools in response to the racist Snapchat incident that occurred this past week. (Nicole Hester/Ann Arbor News via AP)

The exchange Monday shocked many who had gathered for a community meeting at the Saline Area Schools district office after white students posted racist messages to black classmates via Snapchat last month.

During the meeting at the office, about 45 miles southwest of Detroit, parent Adrian Iraola articulated that his son endured racist name-calling by students in the district and described the impact it had on him. His son drew motivation from being called names such as taco, enchilada and nacho, Iraola said, ultimately fueling him to earn a master’s degree from Johns Hopkins University.

“I remember when I went to his bedroom to say good night and he was crying because of the abuse that he was enduring in this school system,” said Iraola, who is the owner of an Ann Arbor-based Mexican restaurant. “…Embrace who you are because the bumps and bruises can make you a better person if you have the strength and the faith that can take you where you want to go.”

A white man, who the Ann Arbor News reported later identified himself as Tom Burtell, then interjected, “Then why didn’t you stay in Mexico?”

Iraola responded that he lives in America because it is “the greatest country in the world.”

Brian Wright, who is black, said his remarks were “indicative of what our kids are experiencing.”

The messages, which included slurs derogatory toward black people, were posted in a Snapchat group that was given the name “Racist” with two gorilla emojis after black students joined. In addition to the anti-black slurs, one non-black student posted messages including “WHITE POWER” and “THE SOUTH WILL RISE AGAIN.”

Scot Graden, the district’s superintendent, said the students’ social media remarks are still under investigation. But he noted that the district already has a plan in motion to address future racist incidents.

“We started a committee last January, so, a little over a year ago in an effort to really address some of the issues of systemic racism in our community and in our society and try to figure out ways we can improve,” Graden said. “And while we are working and getting a lot done and we share that with the community, clearly there’s a lot of work to do. And a lot more we can do.”