Venezuelan Opposition Head Meets Trump in Show of US Support 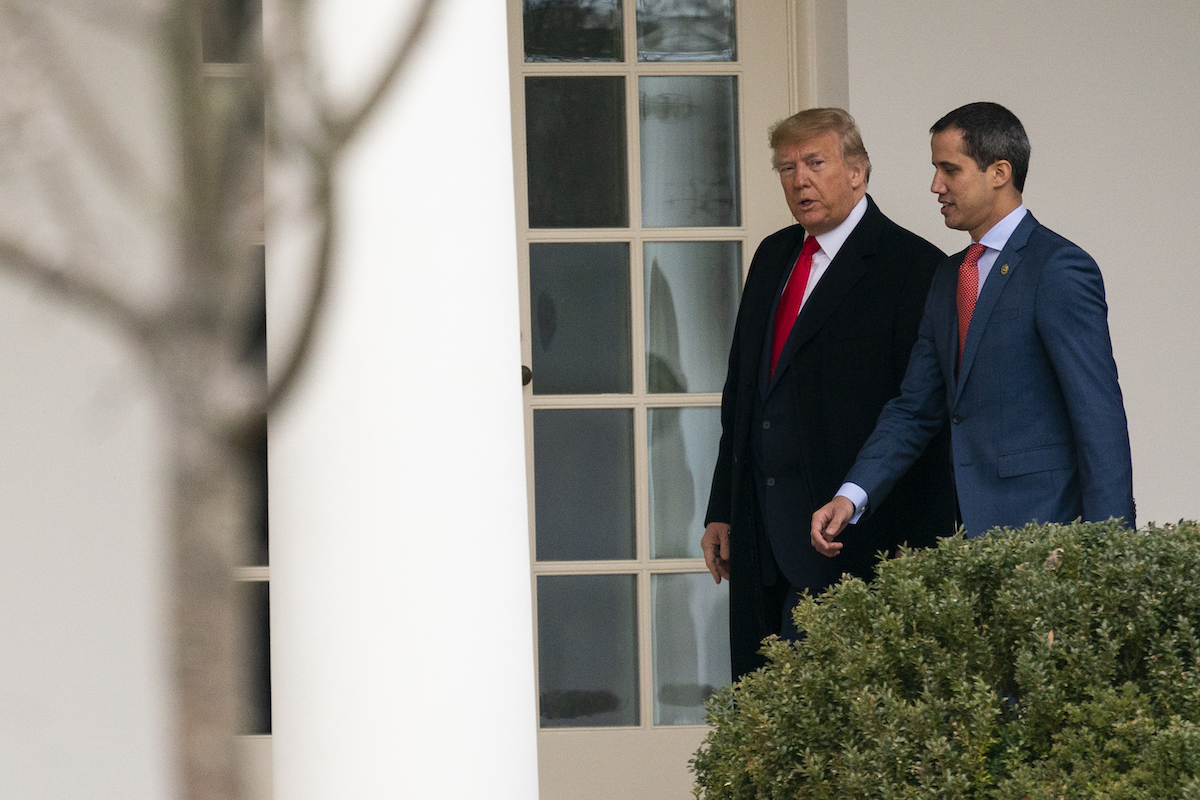 President Donald Trump walks to a meeting in the Oval Office with Juan Guaidó at the White House, Wednesday, February 5, 2020, in Washington. (AP Photo/ Evan Vucci)

Trump stepped outside to welcome Guaidó to the White House as soldiers lined the driveway of the South Lawn, and then escorted him into the Oval Office for a private meeting. A day earlier, Guaidó was a guest at Trump’s State of the Union address.

The White House said Guaidó’s visit was an “opportunity to reaffirm the commitment of the United States to the people of Venezuela.” The leaders were to discuss how the U.S. can work with Guaidó to “expedite a democratic transition in Venezuela that will end the ongoing crisis.” the White House said.

Vice President Mike Pence and Guaidó met at the Capitol before Pence departed on a trip to Pennsylvania on Wednesday. Also attending were Sens. Marco Rubio and Rick Scott, both Florida Republicans.

The U.S. and nearly 60 other governments say Maduro’s 2018 election was illegitimate and that Guaidó, as leader of the country’s National Assembly, should be named interim president under Venezuela’s constitution. These countries blame Maduro’s socialist policies for a political and economic crisis threatening regional stability.

Maduro, however, remains in control, having faced down a failed military uprising, a brief renewal of mass anti-government protests, and sanctions and other U.S. efforts to force him to leave office.

Guaidó slipped out of Venezuela at a time when he had few options left and was struggling to draw significant numbers of people into the street to protest against Maduro.

Guaidó’s momentum saw a slight upturn in early January, when he was seen in widely published images tussling with armed riot police while attempting to jump a fence and enter the National Assembly legislative building.

“Mr. President, please take this message back to your homeland,” Trump said to Guaidó during Tuesday’s speech. “All Americans are united with the Venezuelan people in their righteous struggle for freedom.”

The White House said the U.S. will continue to work with countries in the region to “confront the illegitimate dictatorship in Venezuela” and ensure a “democratic and prosperous” future for its people.

Robert O’Brien, the U.S. national security adviser, on Wednesday called on Russia, China and Cuba to end their support for Maduro. O’Brien said Maduro lacks his people’s support and is “exercising tyranny” over them.

“We call on the Chinese, the Russians and the Cubans to knock it off and to get out of Venezuela and let the Venezuelans control their own destiny,” O’Brien told a group of ambassadors to the U.S.

Venezuela has been a top priority in Latin America for the Trump administration, which a year ago was the first among a coalition of governments to recognize Guaidó as president.

The administration has undertaken what it describes as a “maximum pressure” campaign of sanctions and other measures designed to hasten Maduro’s departure from office, but he has remained.

A senior administration official who briefed reporters before Wednesday’s meeting described the year-long campaign as “at best, half way” to full implementation and said many tools remain to be used against Maduro, including some to be announced in the next 30 days. The official spoke on condition of anonymity under ground rules set by the White House.

Russia has a political, military and economic alliance with Venezuela that was forged under Maduro’s predecessor, Hugo Chavez. Venezuela is struggling to pay back billions of dollars in loans from Russia — about half owed to Russia’s state-owned oil company Rosneft.

O’Brien said the Trump administration would be weighing during the next several weeks whether to impose U.S. penalties on Rosneft for helping provide a monetary lifeline to Maduro.

“We are letting the Russians and we’re letting the company know that it’s not a good business decision, but it is also immoral what it’s doing to the people of Venezuela,” O’Brien said. “So I think you’re going to see some action, either voluntarily from the company or the U.S. will likely take action in the near future.”

Guaidó’s attendance at Tuesday’s speech came as a surprise as he has sought for some time to secure a meeting with Trump, his most important international ally.

Guaidó visited Miami on Saturday, not far from where Trump spent the weekend at his home in Palm Beach, Florida. Guaidó has been on a two-week world tour that took him first to Colombia, then across Europe and Canada, where he sought more international help to oust Maduro.

The Venezuelan government early last year banned Guaidó from leaving the country after he fell under investigation, accused of violating the constitution by challenging Maduro. This is the second time he’s disobeyed the ban, both times leaving to rally international support and risking arrest upon his return.

The administration on Wednesday promised “very significant consequences” if Maduro interferes or harms Guaidó upon his return to Venezuela.

The White House had said earlier Wednesday that reporters and photographers would be allowed to attend the top of Guaido’s Oval Office visit, but it abruptly shifted course and barred reporters.

The decision came as Utah Sen. Mitt Romney was on the Senate floor explaining why he had decided to vote to convict Trump, most likely becoming the only Republican senator to favor ousting the impeached president.

White House spokesman Judd Deere said the decision to close the meeting was not related to Romney, but offered no further explanation.