Concern in El Salvador After Militarized Standoff Over Funds 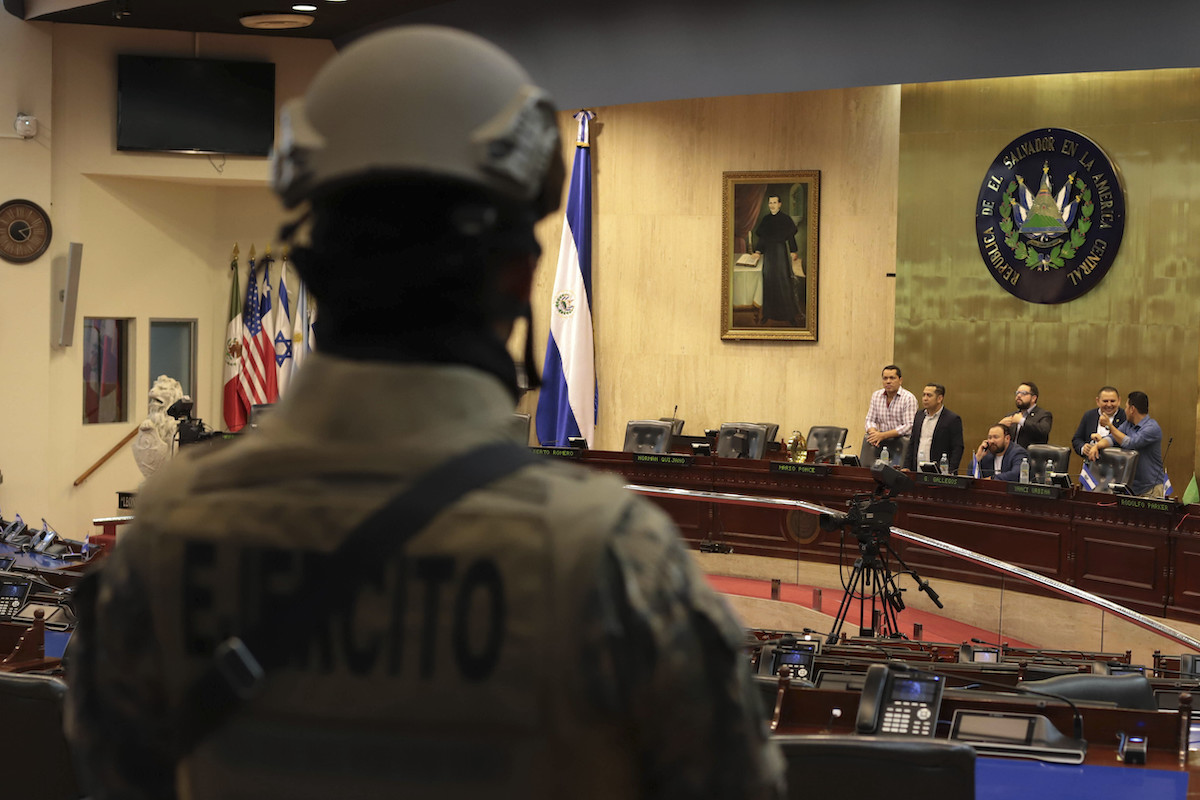 Special Forces soldiers of the Salvadoran Army, following orders of President Nayib Bukele, enter at Congress to give security upon the arrival of the representative in San Salvador, El Salvador, Sunday, February 9, 2020 (AP Photo/Salvador Meléndez)

SAN SALVADOR, El Salvador (AP) — Lawmakers suspended work by commissions in congress Monday, including a treasury committee responsible for debating a $109 million security loan sought by President Nayib Bukele, a day after heavily armed troops and special forces were deployed in and around the building in a display that alarmed many in a country with a not-too-distant history of military dictatorship.

The Legislative Assembly building and surrounding area were clear of the police and soldiers with high-powered weapons, helmets and tactical vests who accompanied Bukele when he arrived there Sunday along with hundreds of supporters who heeded his call to pressure lawmakers. Most had refused to convene to vote on the loan, intended to better equip security forces to combat powerful gangs, saying they want more details on the spending plan first.

“This weekend the country went through a pretty dangerous episode. It was on the verge of a rupture in the constitutional order propitiated by the president himself,” said Jeannette Aguilar, a university researcher on matters of security and violence.

“It is one of the most serious things we have seen in the last 27 years of post-conflict…. The lawmakers were practically being forced to back the president,” Aguilar said.

Bukele defended his actions Monday in a string of Twitter posts, noting that there was no violence at the congress even as four Salvadorans were murdered by gangs elsewhere the same day.

“They do not denounce that the lawmakers have held the security funds hostage, while they finance gangs and offer them firing ranges to train to kill Salvadorans,” Bukele tweeted. “But they denounce yesterday’s action, when not a single window was broken nor a single wall stained.”

Bukele had gone to congress to preside an extraordinary session to push for the loan, but only 22 of the body’s 84 lawmakers were there.

El Salvador is still healing the wounds from its 1979-1992 civil war, part of that under the rule of military leaders accused of responsibility for a number of massacres and other abuses.

Amnesty International expressed concern that “the multiple reports of snipers stationed near the Legislative Assembly, the unnecessary military presence and the restrictions on press freedom could mark the beginning of a dangerous route for institutions and for human rights in the country.”

U.S. Ambassador Ronald Johnson said via Twitter that he did not approve of the military presence but was relieved the “tense situation ended without violence,” calling on all sides to engage in peaceful talks to resolve the dispute.

Vermont Sen. Patrick Leahy said the crisis was “reminiscent of the days when political disputes were settled with threats and violence. That cannot be condoned today, especially by a government that wants to be a partner of the United States.”

It was not clear why Bukele allowed the military presence, which included soldiers armed with M-16 rifles and sharpshooters on rooftops. But some interpreted it as a clear attempt to pressure or intimidate lawmakers into doing his bidding.

Lawmaker Felissa Cristales of the conservative Arena party was one of the few who answered the summons to vote Sunday, but left when she saw the troops.

“We came with the best intentions to discuss an issue of importance for El Salvador, but I see that the executive branch is seizing the security of the Legislative Assembly,” Cristales said.

“The only thing left is for them to point the rifle at the lawmakers to force them to vote,” said Leonardo Bonilla, an independent congressman who had also gone to the assembly.

Since taking office last June, Bukele has prioritized his anti-gang initiative. According to official figures, violence has dropped following the mass deployment of soldiers and police across the country.

Bukele, a 38-year-old conservative businessman, won election in large part for his image as an outsider who doesn’t belong to the political parties that had governed the past three decades.

Top commanders of the police and military expressed allegiance to the president during the standoff Sunday. Bukele gave an emotional speech to his supporters, who had threatened to remove opposition lawmakers from the legislature by force. But he said that after praying, he decided to ask for patience from his supporters and set a deadline of one week for lawmakers to approve the bill. 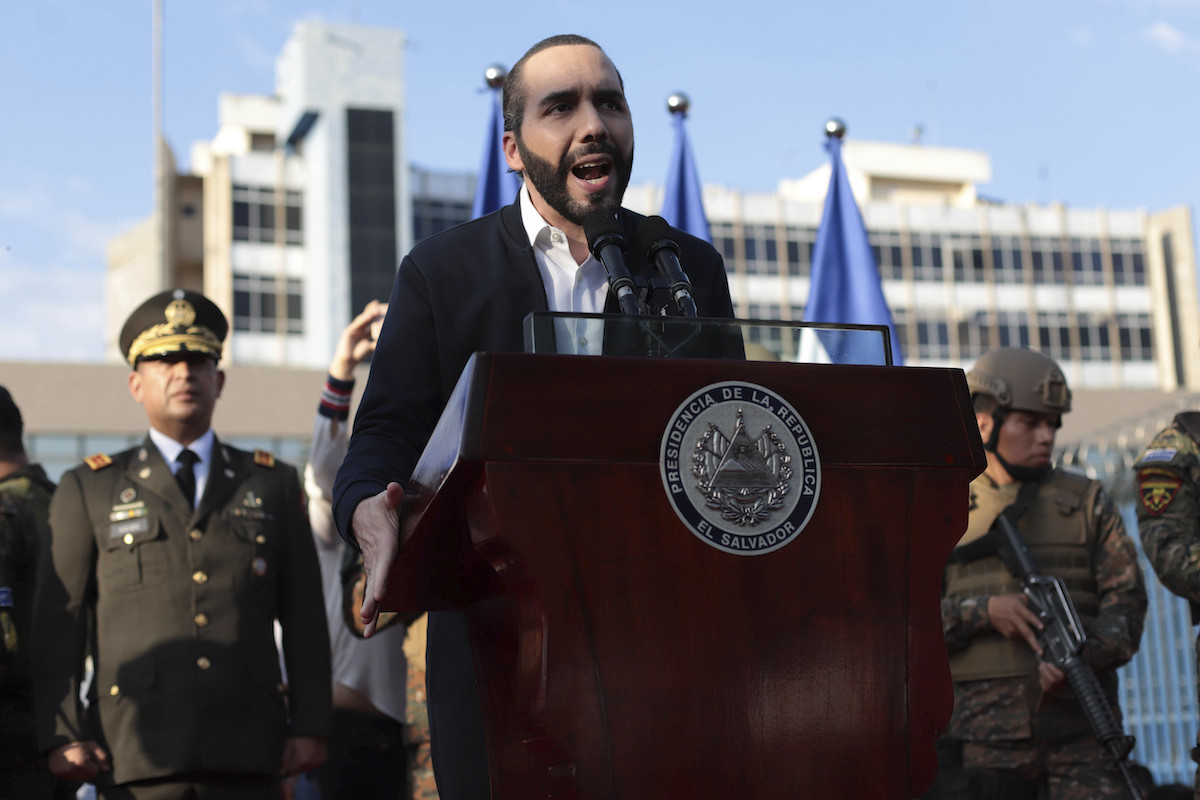 On the streets of the capital Monday, Salvadorans went about their business but there was anxiety in the air.

“I am worried by what happened. … Hopefully this will not get out of hand,” said Teresa Escamilla, who was in San Salvador’s historic center.

Jorge Escalante, a worker in the informal economy, said congress should back Bukele.

“The people responded to the president, but the lawmakers do not want to support him,” Escalante said. “It is sad because crime does not rest.”

Chief Prosecutor Raúl Melara said a team of prosecutors would review the military deployment and see whether any penal action may be required.

“If there is a crime, it is something that should be analyzed,” Melara said in an interview on local TV.

He added that the leftist FMLN party had filed a complaint and that “it will be studied.”