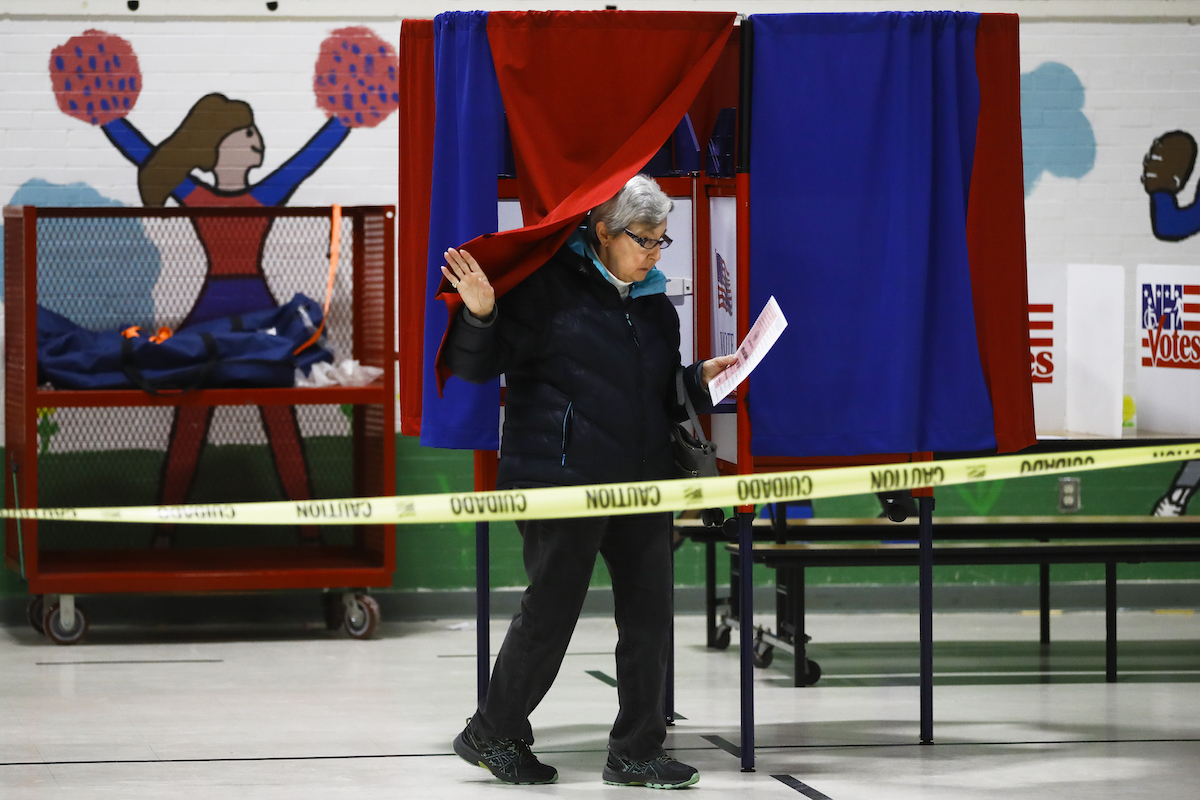 A voter steps from a booth after casting a ballot in the New Hampshire primary, Tuesday, February 11, 2020, in Manchester, N.H. (AP Photo/Matt Rourke)

WASHINGTON (AP) — Democratic voters in the New Hampshire primary were angry at President Donald Trump’s administration and eager to pick the candidate most likely to oust him from office.

Roughly three-quarters of voters said they were not just dissatisfied but also angry with the Trump administration, according to a wide-ranging AP VoteCast survey of Democratic primary voters in New Hampshire on Tuesday. A wide majority said it was very important that Democrats nominate a candidate who can beat Trump in November.

The primary —won by Vermont Sen. Bernie Sanders— came less than a week after Trump was acquitted of impeachment charges. The survey also found that, by a small margin, more voters thought Trump’s impeachment would hurt Democrats politically than said it would help. Just over 4 in 10 said it would not make a difference.

As in Iowa, Democratic voters in New Hampshire said health care and climate change are the most important issues facing the nation. Other issues —including immigration, guns, foreign policy and race relations— all ranked significantly lower.

Here’s a snapshot of Democratic primary voters in New Hampshire —who they are and why they voted— based on results from AP VoteCast, a survey of 3,111 voters, conducted for The Associated Press by NORC at the University of Chicago.

Voters in New Hampshire considered being able to beat Trump and strong leadership to be highly significant qualities in a Democratic nominee. About 8 in 10 described each as very important. 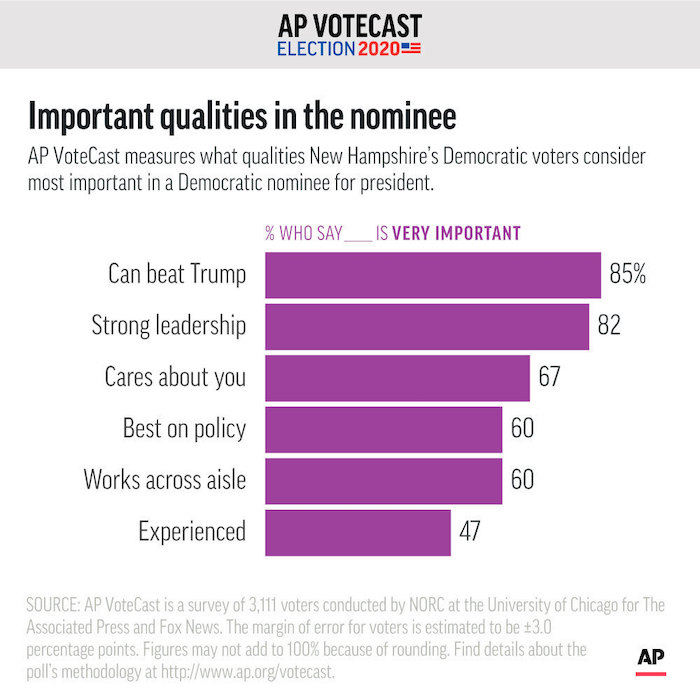 Roughly two-thirds also considered it highly important that Democrats nominate a candidate who cares about people like them, and about 6 in 10 said the same of a candidate who has the best policy ideas and who will work across the aisle.

Fewer placed importance on a nominee who has the right experience, though a wide share said they considered that to be at least somewhat important.

Most New Hampshire Democratic voters want a candidate who would fundamentally change the political system in Washington. Roughly two-thirds said that was a more important quality than restoring the system to how it was before Trump was elected in 2016.

About a third said it was more important to restore the system to how it was.

Among voters who seek a fundamentally new political system, Sanders enjoyed a clear edge over other candidates, with about a third in support of him.

The former mayor of South Bend, Indiana, Pete Buttigieg, and Minnesota Sen. Amy Klobuchar had a slight advantage among those who wanted a return to normalcy.

Sanders was the clear top choice of voters younger than 45 and enjoyed a slight advantage among those without a college degree.

By comparison, Buttigieg and Klobuchar saw roughly comparable levels of support from voters 45 and older, who made up roughly two-thirds of the electorate, with Sanders close behind. 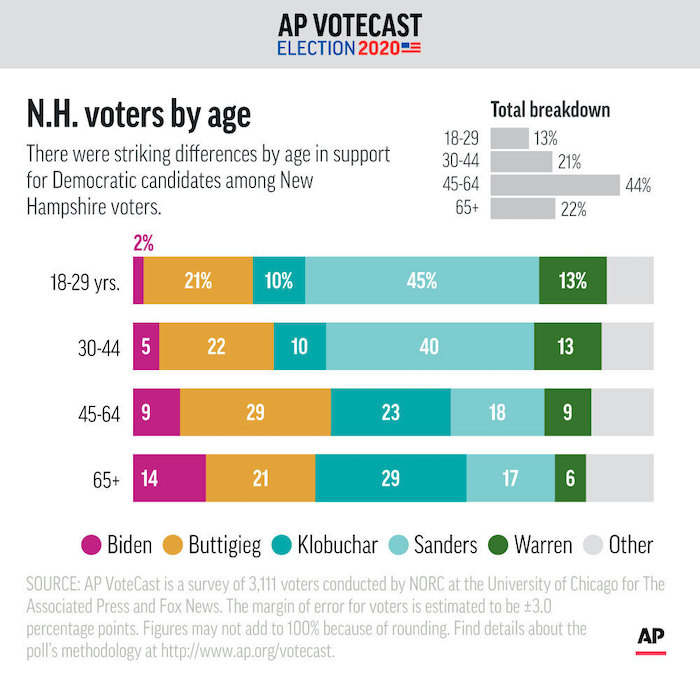 Voters with a college degree went for Sanders, Buttigieg and Sanders.

Men and women were largely similar in their votes for the various Democratic candidates. 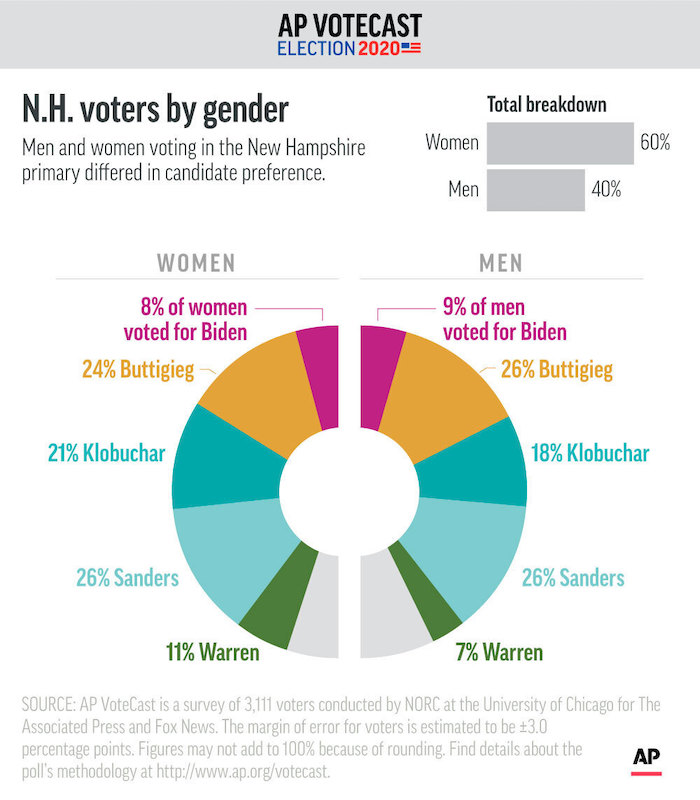 More than 9 in 10 Democratic voters in New Hampshire were white. But among non-white voters, Sanders had a clear advantage.

More voters in New Hampshire’s Democratic primary on Tuesday said they were confident than not that the party’s process to select a nominee is fair, despite the Iowa caucuses riddled with errors in tabulation that left many voters and candidates alike lacking certainty in the outcome.

Still, just 15% said they were very confident. Another 45% were somewhat confident, while 40 % said they lacked confidence.

Six in 10 Sanders backers said they lacked confidence in the fairness of the nomination process. Majorities of voters backing the other top contenders were more confident than not that the process is fair.

A highly debated issue throughout the campaign to date, health care was named as the top issue facing the nation by about a third of voters.

Democratic voters in New Hampshire were largely supportive of a government-run health care plan for all Americans that would replace private insurance plans, with nearly 7 in 10 in favor. 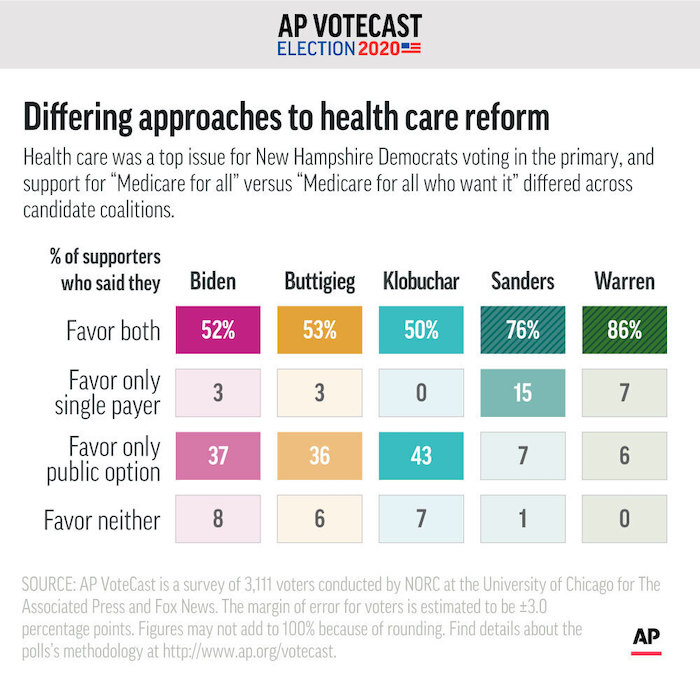 But a somewhat higher majority —nearly 9 in 10— said they favor an optional government plan that any American could buy into if he or she wanted.

About 6 in 10 expressed support for either plan, but roughly a quarter said they favor a public option but oppose Medicare for All.

Climate Change and the Economy

Along with health care, about a third of New Hampshire’s Democratic voters name climate change as the top issue facing the nation. A wide share of voters express support for a tax on the use of carbon, including coal, oil and natural gas, with about 8 in 10 in favor. 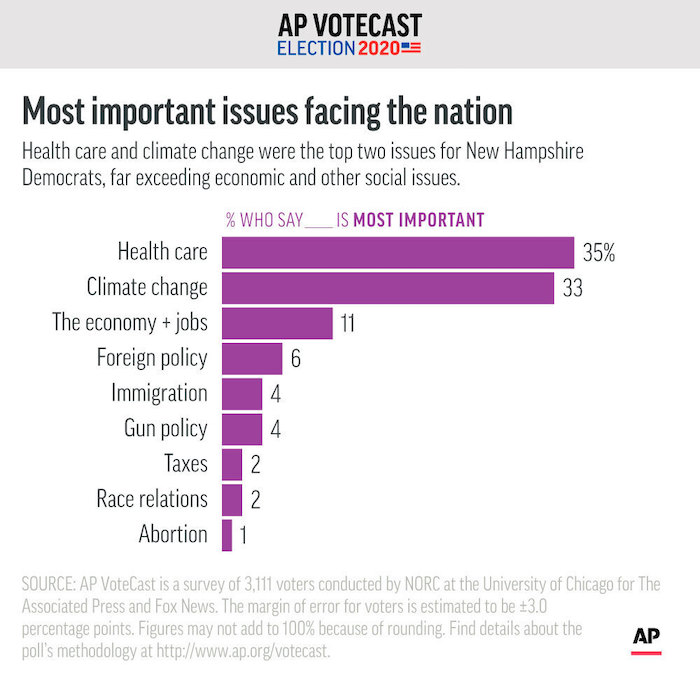 Roughly 1 in 10 identify the economy as the most important priority for the country. Roughly two-thirds describe their families as “holding steady” financially, while about 2 in 10 each say they are “getting ahead” and “falling behind.”

Nearly 8 in 10 say the U.S. economic system is unfair for most Americans.

AP VoteCast is a survey of the American electorate conducted by NORC at the University of Chicago for The Associated Press and Fox News. The survey of 3,111 voters in New Hampshire was conducted for seven days, concluding as polls closed. Interviews were conducted in English or Spanish. The survey is based on interviews with a random sample of registered voters drawn from the state voter file. The margin of sampling error for voters is estimated to be plus or minus 3.0 percentage points.