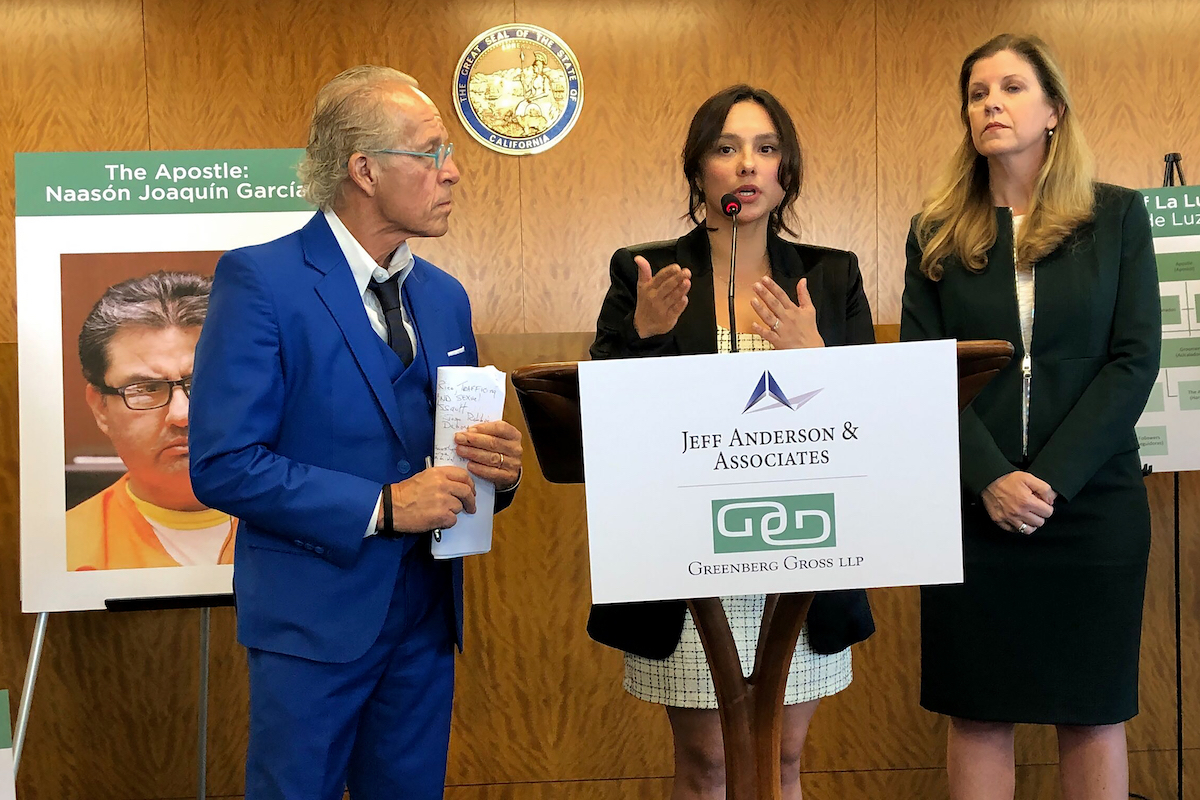 LOS ANGELES (AP) — A Southern California woman says the father and son leaders of a Mexican megachurch sexually abused her for 18 years starting when she was 12, manipulating Bible passages to convince her the mistreatment actually was a gift from God, according to a federal lawsuit.

After she turned 20, the abuse escalated to rapes, beatings and public humiliation from García, Martin alleged, and continued until she escaped the church in 2016 with her husband.

“For the first 30 years of my life, I was taught to believe that my body, my mind and my soul belonged to La Luz del Mundo because it was the will of God,” she said at a news conference Thursday, her voice breaking. “I come forward today because this has to stop. Generations of young children raised in La Luz del Mundo have been forced to become the sexual servants of La Luz del Mundo’s apostles.”

Martin appeared with her attorneys and husband in Los Angeles, where the lawsuit was filed a day earlier. The Associated Press normally does not identify people who say there were sexually abused but Martin said she wanted her name publicized.

García’s attorney did not immediately comment on the lawsuit, which seeks a jury trial and unspecified damages.

La Luz del Mundo, Spanish for “The Light Of The World,” issued a statement that did not address the allegations in the lawsuit. Instead, it said the church plans to proceed as planned Friday with its Holy Supper celebration at six U.S. locations. The Holy Supper is a sacred rite for church members.

García was arrested last year and is being held without bail on charges of child rape and human trafficking involving three girls and one woman between 2015 and 2018 in Los Angeles County. He has denied wrongdoing.

Martin, who is not one of the women in the criminal case, said she has cooperated with U.S. and Mexico authorities since October 2018, but her lawyers declined to provide details. The California attorney general’s office, which is prosecuting García, would not comment.

While behind bars, García, 50, remains the spiritual leader of La Luz del Mundo. The Guadalajara, Mexico-based evangelical Christian church was founded by his grandfather and claims 5 million followers worldwide.

Martin was born in Monterey Park, California, and said she was a fourth-generation member of La Luz. From a young age she was told she was the church apostles’ “property.” Her aunt, who raised Martin starting when she was 3, provided sexual favors to Flores and helped groom her niece, telling her she could not deny the leaders’ desires, according to the lawsuit.

During court proceedings, prosecutors have said parents in the church would hand over their children for the apostles because they consider it to be a “blessing.”

In the lawsuit, Martin said she thought the sex acts were “in furtherance of God’s will.” Because of the abuse, she said she had attempted suicide and was not emotionally or psychologically healthy enough to pursue a lawsuit until late last year.

Martin addressed other potential victims at the press conference, urging them to come forward.

Martin’s lawsuit describes an extravagant lifestyle for García and his family, including exotic animals and a private museum of restored vintage cars, all fueled by church members’ contributions and free labor. The lawsuit estimates that Martin worked at least 30,000 hours of unpaid labor for the church, including at its broadcasting arm in Mexico and California.

In 2010, Flores grew worried about his son’s obsession with Martin, thinking it could risk the church’s stability. He tried to arrange a marriage for her and made García work in a different location, according to the lawsuit.

Soon after Flores’ death in 2014, Garcia resumed a sexual relationship with Martin, according to the lawsuit. She was additionally told to groom children for García, the lawsuit said, and was beaten when she refused to participate in a sex act with a 14-year-old boy.

Martin’s husband was unaware of his wife’s relationship with García until 2016, when he found pornographic text messages between her and García and then helped her escape the church.

Afterward, the lawsuit states, La Luz del Mundo mounted a smear campaign against her family in Mexico and California, and attempted to buy her silence, vandalized her home and followed her. The campaign continued even after Garcia’s arrest, her attorneys said.