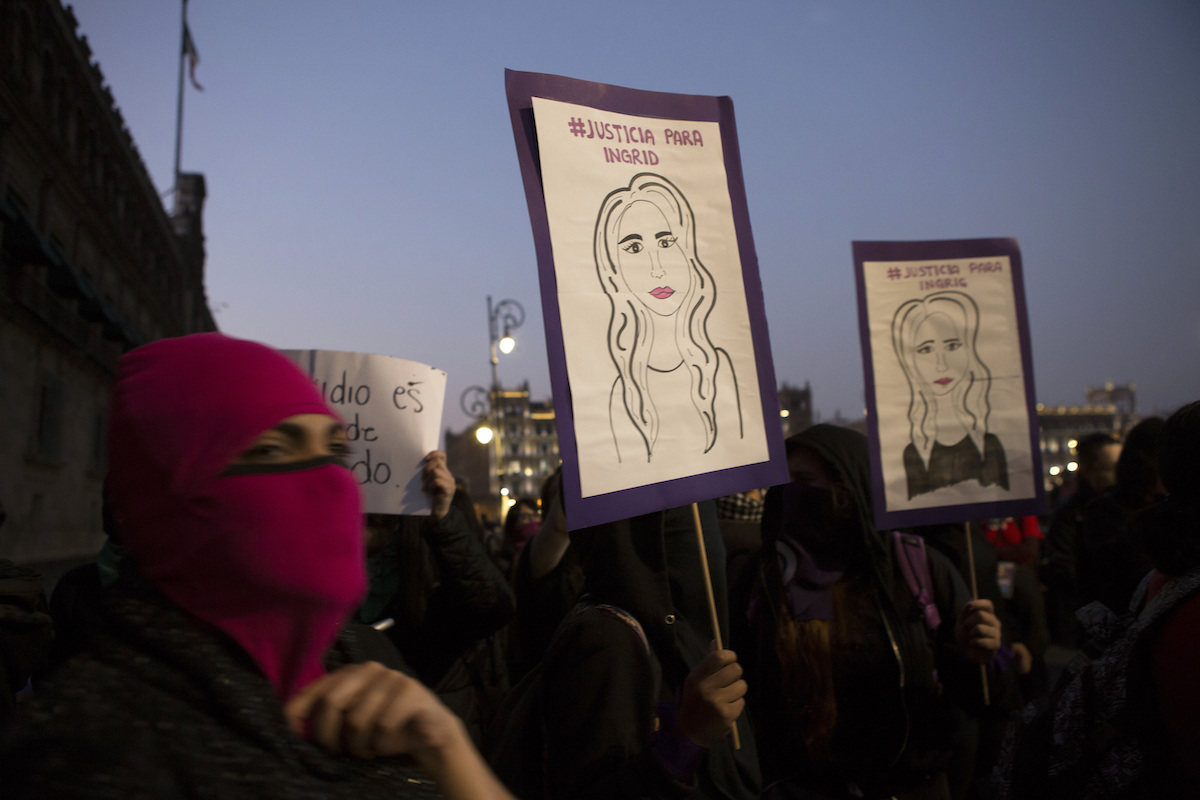 Female protesters hold drawings resembling Ingrid Escamilla, who was killed by her husband last week, during a protest against gender violence outside the National Palace, the presidential office and residence, in Mexico City, Friday, February 14, 2020. (AP Photo/Ginnette Riquelme)

MEXICO CITY — In a country where femicide is, unfortunately, the norm, the brutal murder of Ingrid Escamilla, 25, at the hands of her partner who not only killed her, but skinned her body and cut it up in an attempt to get rid of the evidence, sparked outrage as Ingrid became a victim not just once, but three times.

The anger grew across Mexico City, where she was murdered, and spread across the country after newspapers published photos —on the front page— of her mutilated body.

Ingrid became a victim yet again after Mexican President Andrés Manuel López Obrador said during his daily press conference on Tuesday that “There’s been a lot of manipulation of femicide…the media is telling a lot of lies.”

López Obrador had intended for his press conference to be focused on the presentation of a check that will be given to the winner of the raffle for the presidential plane, which he has been trying to sell for the better part of a year. But, that’s another story.

He said, “I don’t want femicide to overshadow the raffle.”

Words from a president whose country had 2,833 femicides last year alone. And femicides increased 137 percent in the past five years, according to the news site diariomnoticias.com.

It would seem López Obrador places the importance of his raffle above the lives of women.

Twitter users were quick to respond to López Obrador’s seemingly lack of sensitivity and urgency to a matter that affects so many.

(In Mexico they are killing women. Ingrid Escamilla was one more among thousands and thousands. But our President cares more about his popularity and that’s why he downplays femicide. But that cannot be hidden, even if they promote hashtags to praise him. #JusticeForIngrid)

(The words of a man who is unscathed by the dreadful consequences his government is causing. A man who is totally indifferent to the safety of women and children and the health and well-being of Mexicans. #Femicide #IngridEscamilla)

At time when the crime of femicide should be looked at more harshly and stricter penalties applied, López Obrador is, seemingly, placing more value on his raffle.

On Twitter on Tuesday, Claudia Sheinbaum, head of government for Mexico City, wrote:

(Femicide is an absolutely reprehensible crime. When hatred reaches the breaking point as it did with Ingrid Escamilla, it is indignant.)

At press conference later that day, Sheinbaum said that the accused will receive an exemplary punishment.

But even as Sheinbaum talks about the harshest punishment for the accused, there is talk about “reforming” the law that dictates how femicide is punished, which led many to believe it might be eliminated altogether.

During a press conference on February 10, Mexico’s Attorney General Alejandro Gertz Manero said his intention to reform femicide as a crime is not to make it disappear, but to make it easier to investigate and make violence against women visible.

This after organizations and activists warned that the Plan of Criminal Prosecution, sent by Gertz Manero and which includes the proposal to reform femicide, did not comply with the legal procedures agreed on for its creation and delivery and, therefore, is an illegal document.

During the Monday morning conference, the attorney general argued that after making an analysis of the common jurisdiction “we found that in the classification of this crime, which is the way it is presented and the elements that have to be given to be able to prosecute, there were a series of obstacles that we think should be overcome.”

Gertz Manero went to say that femicide, as it is now written in the penal code, “is not clear enough” to allow for a legal defense for the victims.

For her part, Sheinbaum said the crime of femicide must not disappear, and is against any legal maneuvering that would take it off the books.

“I do not agree with eliminating the crime of femicide, it is an achievement in the fight by women against violence against women simply because they are women, and that is something that must continue to be recognized by the prosecutors and judges,” Sheinbaum said.

In the days after the photos were published, scores of people on Twitter continued to use the hashtag #IngridEscamilla, but now that hashtag will show words of solidarity along with photos of landscapes, flowers or mountains. It’s become a way of burying the gruesome photo of her body so that she does not continue to be victimized in death. 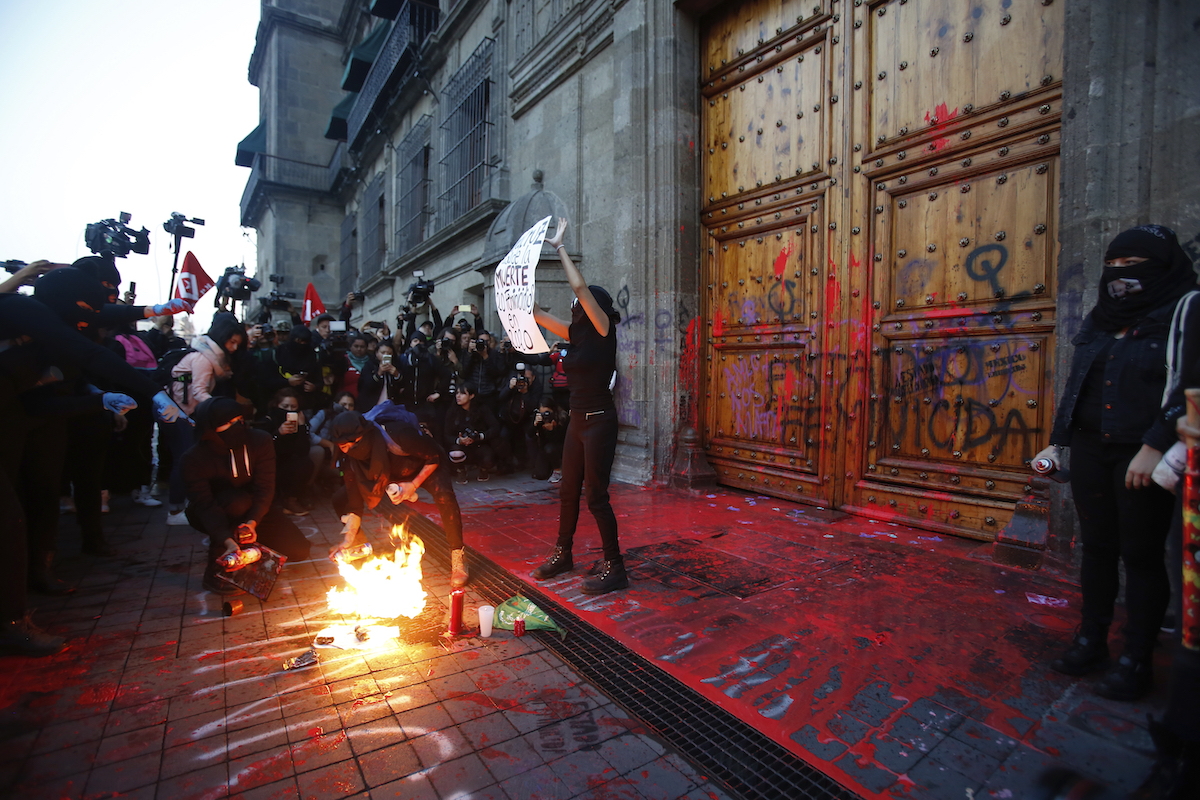 A female protester stands with a sign before the media at the entrance to the National Palace, the presidential office and residence, after demonstrators covered it in fake blood and the Spanish message: “Femicide State,” in Mexico City, Friday, February 14, 2020. (AP Photo/Ginnette Riquelme)

In the early morning hours of Friday, women took to the streets of Mexico City and marched to the city’s historic center where the Palacio Nacional. They demanded justice for Ingrid and all victims of femicide. Friday’s march was not without violence and destruction, but that rage has been boiling for years and is now coming to the surface with demands that the government do something to stop violence against women. More marches are planned this weekend.

By Friday, López Obrador labeled Escamilla’s killing a hate crime and “an act of brutal machismo.”

Perhaps Ingrid’s death is the spark that will lead to real change for women in Mexico. But ultimately, that lies in the hands of those in power who must change the laws and apply harsher punishments. But the change also needs to come from the people, those who have the courage to stand up and say “Basta!” “Enough!”

Vicki Adame is a journalist based in Mexico City. She tweets from @vickiadame.