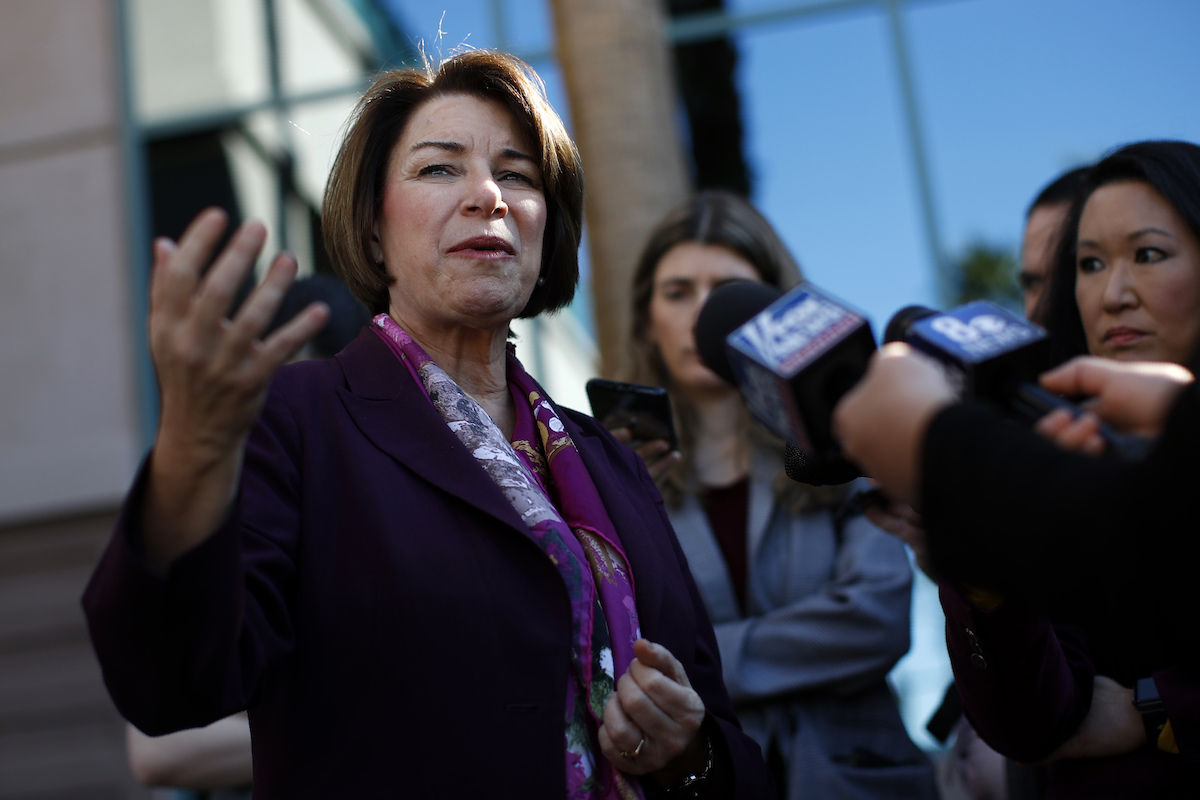 LAS VEGAS (AP) — Democratic presidential candidate Amy Klobuchar says she no longer believes English should be the national language of the U.S., disavowing a vote she took more than a decade ago as she tries to build support in a state where Hispanics make up a critical constituency.

Campaigning in Las Vegas, the three-term Minnesota senator said Friday that she has changed her stance since voting for an English-language amendment in 2007 and has “taken a strong position against” it. She also blasted President Donald Trump for using immigrants as “wedges” and said as president she would work with Republicans to achieve comprehensive immigration reform.

Klobuchar’s record on immigration is under scrutiny after her third-place finish in the New Hampshire primary this week revived her campaign and sent her on to Nevada’s February 22 caucuses with fresh momentum. After focusing much of her campaign on the first two voting states —Iowa and New Hampshire, both predominantly white— she’s now navigating a much more diverse electorate, where some of her moderate positions and willingness to vote with her Republican colleagues could be a liability.

Klobuchar was one of 17 Democrats to support a 2007 amendment that would have reversed President Bill Clinton’s executive order requiring federal agencies to provide materials in languages other than English. It passed 64-33, but the larger immigration bill died.

The amendment’s sponsor, Oklahoma Republican Sen. Jim Inhofe, said after the June 2007 vote that the amendment was about “preserving our culture and heritage” and would “send a message to all those who have come to our country and all those who will immigrate here in the future that English is the language of our land.”

“I think that when you look at a state like this state, and a country like ours that is so diverse, you don’t want to have that provision in law because then it would be very difficult to have, say, government documents and other things translated into other languages,” she said Friday. “So that is not a position I take. I did vote that way, but way back then, along with many other people.”

“I embrace immigrants,” Klobuchar said following a tour of the Culinary Health Center, which serves members of the majority female and Latino Culinary Union, among the most powerful union in Nevada politics.

The senator also faced questions about comments she made about border security during a 2006 campaign debate, and her 2007 vote for an immigration bill that would have beefed up fencing and enforcement among the U.S.-Mexico border.

In a recently resurfaced video of the debate, Klobuchar says the U.S. needs more resources at the border. “We need to get order at the border,” including a fence, and she says she would stop giving amnesty to companies that hire immigrants in the country illegally. She also backed giving people in the U.S. illegally the chance to earn citizenship if they are willing to pay taxes, learn English and pay a fine.

After taking office in 2007, she voted in favor of a bill that called for 370 miles (595 kilometers) of “triple-layered (border) fencing” and 500 miles (800 kilometers) of vehicle barriers. It also sought to roughly double the number of Border Patrol agents from about 12,000 at the time, adding 11,600 agents over five years. Obama and then-New York Sen. Hillary Clinton also voted for the bill. Sanders voted no. He said in 2015 that he opposed the 2007 bill because it included a guest worker program that would allow too many low-wage workers into the U.S.

Klobuchar said Friday that she took “a lot of heat” during the 2006 Senate race for being too lenient on immigration, saying that almost every ad run against her was about immigration but that her support for immigrants “has not wavered.”

“Immigrants don’t diminish America—they are America,” she said in Reno on Friday afternoon.

Klobuchar faces a particular challenge because she is not well known in Nevada. That means she has roughly one week to introduce herself to voters and to explain her past positions to people who may be hearing about them, and her, for the first time.

Maria-Teresa Liebermann, deputy director of the progressive organization Battle Born Progress, said Klobuchar’s past positions could have some impact on Nevada voters. While other issues are important, many voters who care about immigration have grown more cynical of all politicians and less forgiving of past mistakes, since the hardened immigration policies of the Trump administration.

“When I heard about it, I definitely thought she’s got a lot to learn and a lot to answer for, especially when she comes to a place like Nevada,” said Liebermann. “That is something that folks may think about” when they vote, she said.

But Cecilia Muñoz, who has worked on immigration issues in Washington for more than 30 years, including in the Obama White House , said supporting additional border security like what was in the 2007 bill was “standard for Democrats and everybody at the time.”

Muñoz, who is now vice president of New America, also noted that many Democrats have changed positions on immigration issues over the last decade or more, she said.

“I did not experience Sen. Klobuchar as an English-only zealot. Ever,” Muñoz said. 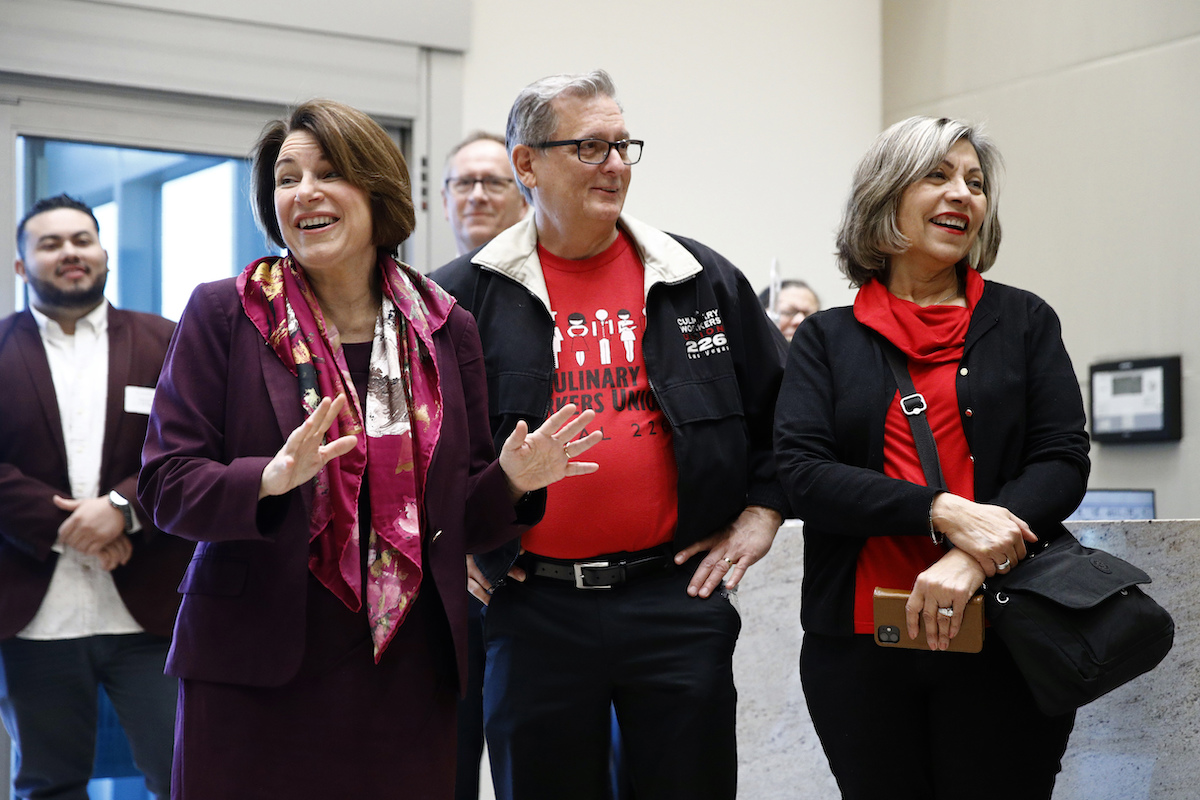 Klobuchar also was a target of criticism Thursday from rival Pete Buttigieg, the former mayor of South Bend, Indiana. Buttigieg is competing with Klobuchar for moderate voters and is also struggling to build support among Hispanics and African Americans.

Buttigieg, who essentially tied for the lead with Sanders in Iowa and finished second in New Hampshire, knocked Klobuchar without naming her for supporting the confirmation of U.S. Customs and Border Protection Commissioner Kevin McAleenan. During McAleenan’s time leading the agency, Democrats criticized the Trump administration for separating children from their parents at the border and detaining them in overcrowded facilities with poor conditions.

“I’ve heard some people say that, you know, my experience is not relevant because you have to have Washington experience in order to become a president,” Buttigieg said during a forum hosted by the League of United Latin American Citizens, the largest Hispanic civil rights organization. “But some of those same voices are among those who voted to confirm Kevin McAleenan as the CBP head who presided over, for example, the horrifying conditions that children were kept in, and we have to look at what kind of judgment that experience has brought.”

Asked Friday about the remarks, Klobuchar said that she disagrees “vehemently” with Trump’s border policies and that McAleenan had been recommended by Obama officials and other Democrats —including Nevada Sen. Catherine Cortez Masto— voted for him, too. Sanders and Massachusetts Sen. Elizabeth Warren, another 2020 candidate, voted no.