Denouncing the US, Venezuelan Troops and Militias Stage Drills 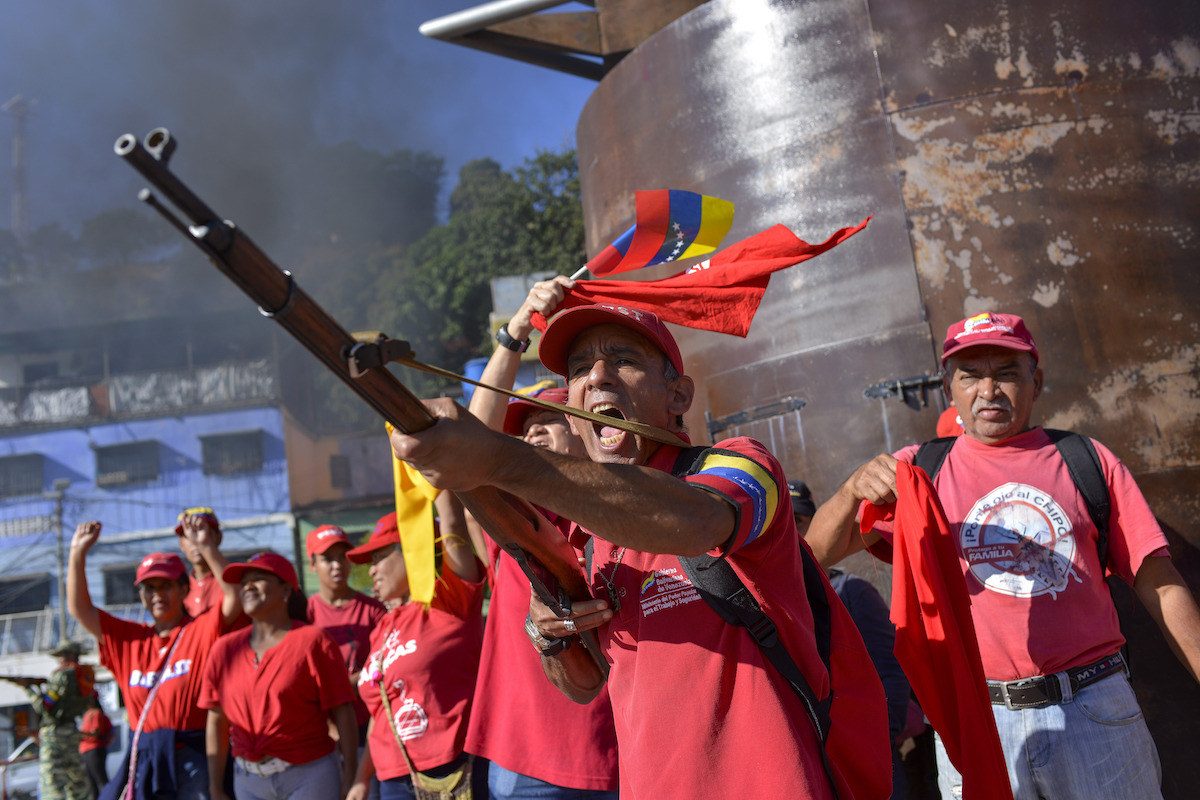 A member of the Bolivarian National Militia brandishes a rifle during an invasion drill in Caracas, Venezuela, Saturday, February 15, 2020. (AP Photo/Matías Delacroix)

CARACAS, Venezuela (AP) — Venezuela’s armed forces and civilian militias took the streets in cities, beaches and border regions on Saturday for drills ordered by President Nicolás Maduro, amid tensions between Washington and Caracas.

Despite the maneuvers, there are no indications that the U.S. plans any military intervention in Venezuela. Washington has focused on political and diplomatic pressure in its efforts to oust Maduro, only saying last year that it had not ruled out a military option.

Maduro called for the exercises as he comes under pressure from the U.S. and dozens of other nations backing a year-long campaign by opposition leader Juan Guaidó to force the leader from power.

Residents in a pro-Maduro slum in Caracas participated in the exercises. They included a growing number of civilian militia members recruited by a cash-starved government that is struggling to keep Venezuela’s shattered economy afloat.

“I answered the call to help prepare for our defense because my country, my homeland, is under threat from the U.S. empire,” said militia member Pablo Antonio Reyes, a 63-year-old electronics technician.

Militiamen and government supporters dressed in red shirts held combat drills on streets blocked off by city buses. They evacuated residents from buildings as tires burned on rooftops to simulate fires from attacks. 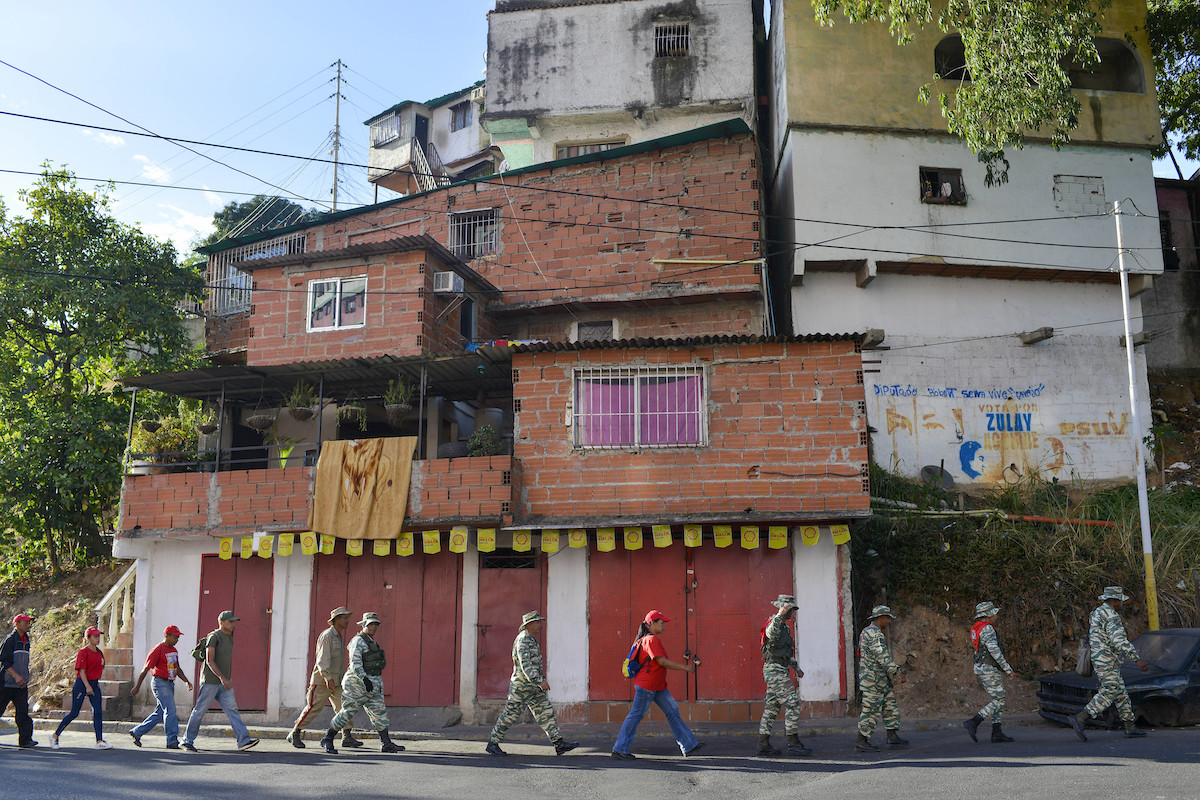 “The purpose of this exercise is to keep us prepared,” said militia member Carmen Ferrer, 50.

Maduro said that the two-day maneuvers were aimed at fending off “terrorist aggression” by Washington and its allies in the region including neighboring Colombia.

The Venezuelan military, which has received Russian support, deployed missile launchers, anti-aircraft batteries and radars in the streets. The government seeks to boost militia ranks, filled out by the old and young, housewives and students.

Guaidó, who launched a campaign a year ago to end two decades of socialist rule, on Saturday call on the armed forces to abandon Maduro’s failed leadership and help him reconstruct a new Venezuela. His previous appeals to the military to change sides have fallen short.

“We are with you,” he said, lamenting the condition of what he called “malnourished soldiers” in Venezuela’s once-proud military. A relatively small number of Venezuelan troops have defected in the past year.

Guaidó spoke a day after Maduro threatened the opposition leader with jail.

“The truth is that the risk is not only for Juan Guaidó,” the opposition leader said of himself, noting a list of jailed politicians and political allies. “But for everyone.” 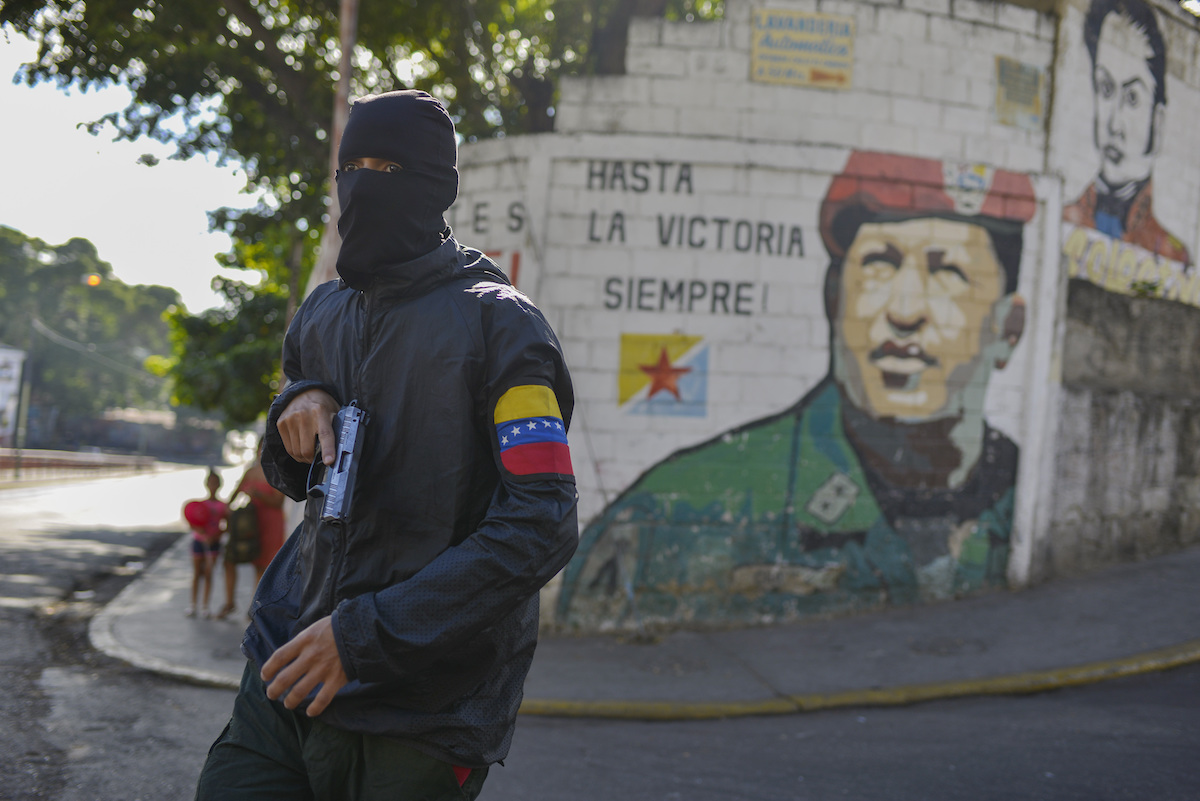 A member of a pro-government group takes part in an invasion drill at the 23 de Enero neighborhood in Caracas, Venezuela, Saturday, February 15, 2020. (AP Photo/Matías Delacroix)

Guaidó this week returned from a three-week international tour aimed at increasing support for overthrowing Maduro. At a White House meeting, President Donald Trump reaffirmed his support for Guaidó, calling him Venezuela’s legitimate president and Maduro a “tyrant.”

“I do not think that this does anything,” Blanco said.