Open Letter to DNC and Democratic Candidates: Don’t Look Away From Immigration in the Debate 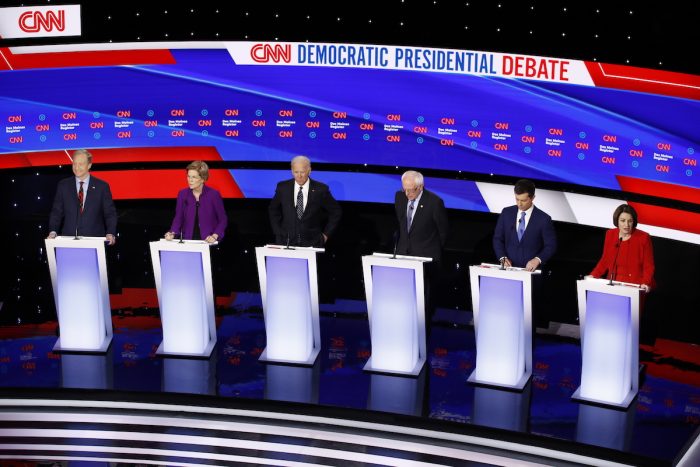 On behalf of the undersigned organizations participating in the construction of the Migrant Justice Platform, we write to raise serious concerns about the lack of debate about immigrant rights during Democratic debates and to request in the strongest possible terms that all candidates detail with far greater emphasis how they will confront and overcome the unrestrained xenophobia and domestic human rights crisis unleashed by Donald Trump.

Don’t look away. We need to talk about this.

With the exception of one or two passing mentions, the previous three debates have failed to cover immigration policy in any meaningful way. Only when the single Latino candidate pressed the issue did a glimmer of conversation begin. Ironically, the controversy generated by Secretary Julián Castro’s interventions appeared to have a chilling effect on subsequent debates, with nervous pollsters warning that the positions taken would be harmful in a general election. But the consensus forged under Secretary Castro’s leadership was not, and should not be controversial: Refugees and asylum seekers should not be punished, immigrants should have access to health care, and Democrats must be honest about President Obama’s mixed legacy on deportations.

The utter absence of debate about immigrant rights in recent debates suggests that the party is collectively reverting to a failed strategy that takes immigrants for granted. As the theory goes, as long as Democrats are not as punitive and racist as Republicans, they simply need to do the bare minimum in order to be the lesser of two evils. Ironically, this cynical and risky strategy is what allowed Trumpism to flourish in the first place.

As the candidates take the debate stage on Wednesday, the first question that should be asked is this: What lessons have Democrats learned from their failed approach to immigration in the past? Only when this question is answered, can the party have a productive approach about where to go from here.

From the moment that Donald Trump launched his campaign weaponizing tragedies in support of his racist assertions about Mexican immigrants, his strategy has been clear: the scapegoating and dehumanization of migrants would be used to advance corrupt, authoritarian use of government. And particularly since the impeachment acquittal, Trump has doubled down on this strategy, using ICE, the Border Patrol, and the Justice Department all as instruments of his reelection campaign.

Simply put, it is inconceivable that Democrats can succeed in defeating Trump if their candidates are unwilling to talk about immigration. Some have taken important steps in their platforms to address mass deportations, labor conditions, and criminalization, but in the face of Trumpism, candidates must prove now that they are able to articulate, defend, and advance their platforms. In the absence of this debate, the country will not have adequate information to decide which candidate is most likely to defeat Trump in November

As voting begins in earnest in states most severely impacted by Trump’s brutal immigrant-bashing, we sincerely hope that candidates will begin to compete to prove their leadership on the defining issue of the election.