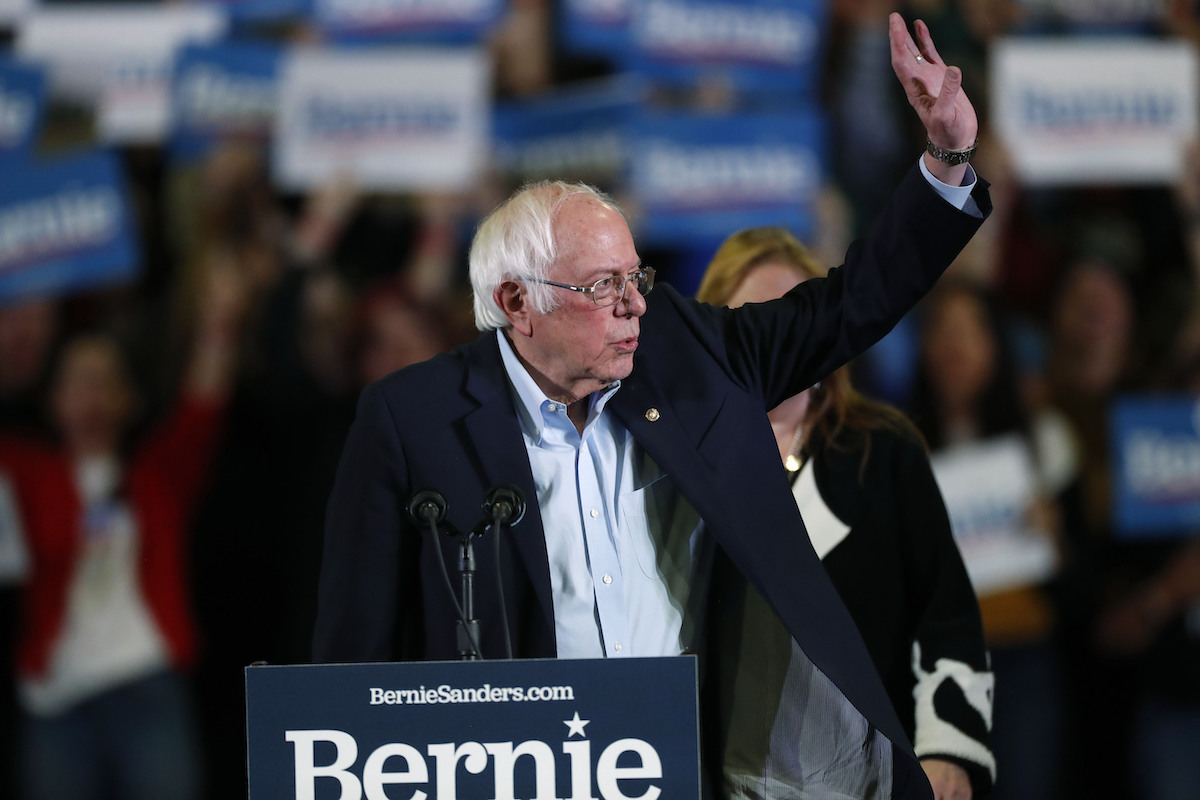 I am the son of Cuban immigrants. I grew up in South Florida.

My grandfather was a political prisoner under Fidel Castro in 1961.

He passed away in 2017, and before my grandfather left us, I sat down with him to listen to his stories about his time in the prison camp.

That was a deeply emotional conversation, and a day like today makes those memories flash back into my mind. These disingenuous attacks against Bernie Sanders have been deeply offensive and hurtful, as I see these political hacks using my grandfather’s suffering and that of other political prisoners to advance their cynical political agenda.

My grandfather was a political prisoner under Castro in Cuba. I'm deeply offended at those using my grandfather's suffering to take cheap political shots against Bernie.

Bernie was referring to social welfare programs that were instituted in Cuba, and disavowed the repression.

In an 60 Minutes interview on Sunday with Anderson Cooper where he was asked about a comment from 40 years ago, Sanders made it clear he condemned the authoritarian government and use of political prisoners, and was only commenting on the improvements of social welfare programs in Cuba.

Bernie Sanders defends his 1980s comments about Fidel Castro in an interview on 60 Minutes. https://t.co/ySqvQKoiBU pic.twitter.com/lTwuXWp9sA

At a CNN town hall on Monday, he was asked again, and Bernie reiterated his condemnation of the Cuban government’s authoritarianism and restated his comment that a literacy program is good. His response was right again.

Bernie Sanders stands by his qualified praise of Fidel Castro's regime in Cuba: "(Castro) went out and they helped people learn to read and write. You know what, I think teaching people to read and write is a good thing" https://t.co/bYWUCRIz9l #CNNTownHall pic.twitter.com/yUlZjvIdPl

I’ve had it with people speaking for our Cuban-American community and simply using us as a political football to hurt Sanders, an honest and genuine candidate fighting for democracy and better living conditions for all of us. This is really just about undermining Sanders after he wiped the floor in a landslide victory in Nevada, where he won 70% of the Latino vote.

The establishment and political opponents are nervous because Sanders has won the vote in the first three states and is firmly on his way to win the nomination. The timing of these attacks make it clear that these are motivated by the fact that the rich and powerful are threatened and they believe these cheap political shots will work.

Politicians like Marco Rubio have sold out our community and built their whole career by stocking anti-Castro sentiment while voting for policies that have also hurt us. Their latest attacks are just a ploy help re-elect President Trump by fear-mongering.

It is also important to point out that these attacks are not just coming from Republicans, but also from establishment Democrats. It’s very disappointing witnessing the political opportunism of establishment Democratic politicians who know better—participating in these disingenuous red-baiting smears, which are only hurting the party and ultimately helping Trump in the long run.

I'm hoping that in the future, Senator Sanders will take time to speak to some of my constituents before he decides to sing the praises of a murderous tyrant like Fidel Castro. https://t.co/Iwvmay9LOH pic.twitter.com/KT9sQ0pfkh

If we really take a look at what Bernie said, it is very similar to what past Barack Obama and Jimmy Carter have said about Cuba’s healthcare and educational programs. Praising these programs is nothing new.

The latest attempt by the media to smear Bernie Sanders is stating that Bernie "praised" Fidel Castro.

NO. What Bernie did is point out to us that despite how bad Cuba was, there were positive elements that we could learn from. Just like Barack Obama pointed out in this video: pic.twitter.com/C7iEhd9wdW

If the outrage is really about praising murderous dictators (which Bernie did not do), then let’s take a look at what Trump has said about the brutal dictator Kim Jong Un, Vladimir Putin, and the journalist-chopping Prince Mohammed Bin Salman of Saudi Arabia. Trump traded love tweets and love letters with them, while attacking democratic institutions domestically and locking up children in cages- violating their basic human and civil rights.

Meanwhile, Mike Bloomberg praised the communist government in China and said their leader is not a dictator just as recently as last year.

Bloomberg also has an extensive track record of supporting authoritarian leaders and policies, going as far as implementing some of these policies when he was mayor of New York City, like stop and frisk, which greatly damaged the lives lives of Black and Latino New Yorkers. Furthermore, Bloomberg used the police to unconstitutionally and violently crush peaceful protests, such as during the 2004 Republican National Convention and Occupy Wall Street in 2011.

Please consider who the real authoritarians in this election are, and it clearly isn’t Bernie Sanders, who has a 100% ACLU score and a consistent record of protecting civil liberties and political freedoms. The fear-mongering against Bernie on this issue is a big nothing-burger, or as I say, a big nothing-sandwich.

In addition, we should also add context to Cuba’s political situation, which is first and foremost widely misunderstood. As I grew up hearing about the downfalls of communism, socialism, and Castro, one thing that was clear to me is that people supported the reforms, even the ones who would later oppose Castro. What I came to understand was that the main issue in Cuba was the lack of democracy and political rights, not the social programs of healthcare and education, which did lift many out of extreme poverty and literacy at the beginning.

Yes, context is important, and it has to be understood that the Cuban Revolution was a popular uprising and social movement against Fulgencio Batista, a murderous right-wing dictator who was propped up by the U.S. and the elite class. Many people, including my great-grandmother, fought in that revolution to bring democracy, healthcare, education, and housing to the people.

As it’s been pointed out, although the programs made improvements, the authoritarian nature of the Castro government has been and should be condemned, juts like Bernie noted. We won’t forget those unjustly killed or imprisoned, but we must also not use their pain for political gain. When talking about Cuba, we have to make it clear that there is a nuanced distinction between the social issues and the political structure.

On the other hand, we can learn from the fact that a poor country like Cuba has the same life expectancy as the U.S. and even guarantees healthcare and education to everyone as a basic right. Let us ask ourselves one question: why can’t the U.S. (the wealthiest country in the entire world) do the same?

Are there major issues with Cuba? Yes, of course. However, we can’t forget the devastating effects of U.S. foreign policy and the consequences the embargo has had on the island politically and economically, not to mention the broader repercussions of U.S. intervention and pillaging in Latin America, which created political situations that forced our families to flee.

Cuba is the prime example of such failed policies.

As a young Cuban American like many others growing up in the United States, we realize that politicians who have claimed to be for our community because they condemn the Cuban government, have actually never done anything to improve the standards of living of our families. They have called any programs or plans to help the working people “Socialist” or “Communist” in order to silence any sort of change. Our generation, along with other Latinos, have seen how disingenuous these politicians are while we look at the profound injustices in our society and the gross levels of wealth and income inequality that has occurred.

Growing up, we saw how hard our parents worked and struggled to give us a better life in this country, living paycheck to paycheck, and now we have an uncertain future, when we are projected to have a lower standard of living than that of our parents. We are also experiencing and increasing amount of anxiety and fear about our existence in this country as racism against our Latinx community ramps up with vicious rhetoric from Trump and his supporters, immigration policies, and violent hate crimes like the El Paso terrorist attack targeting our community.

However, even in the midst of all of it, we are given hope by presidential candidate Bernie Sanders, who speaks to our needs and articulates a very different future than the scary one we are headed towards. When he talks about Democratic Socialism we know it’s not the spooky Castro Communism that our family members ranted to us about over lunch and dinner as we drank our café con leche, but instead a social democracy of the likes of Finland and Denmark where everyone is guaranteed basic economic and social rights such as healthcare, education, a living wage, housing, and a strong democracy. Sanders also talks about bringing people together, no matter our race, ethnicity, national origin, gender, sexual orientation in a movement of compassion and solidarity.

In Bernie’s agenda, we see what our parents came looking for in United States—the American dream that they were promised but were never granted. Our generation understands this, and we realize the power we have to make our voices heard in the political process.

With four more years of Trump likely leading to the final death nail on American democracy, we need to unite and come together as a nation to achieve the values we profess to the world. All of these politically-motivated attacks against Bernie Sanders fall flat to me and tens of thousands of other young Cuban-Americans who realize we are no longer in the Cold War era, and that it is our turn to decide our future—one that works for all of us and not just the wealthy few.

Carlos Calzadilla-Palacio, is the President of Young Progressives of America and an immigration activist. He is a senior at CUNY John Jay College of Criminal Justice Studying Political Science. Twitter: Carlos_Jesus07.