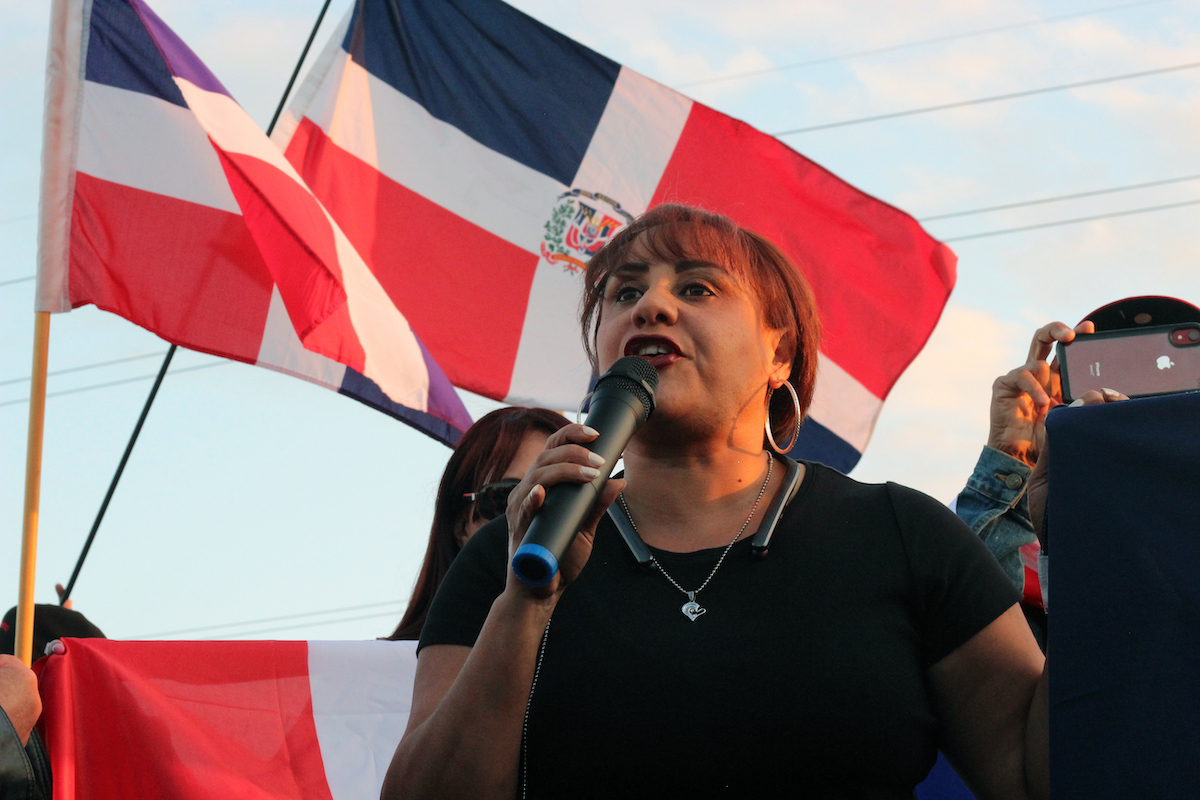 TAMPA – They came dressed in black. Shortly after 5 p.m. Saturday, Dominicans began trickling into the parking lot of Aqua Lounge, a popular nightclub. Word spread quickly of a planned protest to decry the decision by Santo Domingo’s Central Electoral Board (Junta Central Electoral in Spanish) to cancel elections on February 16. Officials reported the issue as a system glitch, but citizens were overwhelmingly convinced that this was corruption and fraud.

The gathering of more than 100 Dominicans in Tampa on Saturday joined thousands of their compatriots in other parts of the U.S. and the world to let their voices be heard. Some brought signs in Spanish that called for the end to impunity in their native Dominican Republic. Other signs had messages of hope for the future of the Caribbean country.

Crowd has thickened near Aqua Lounge in Tampa. There are chants of “Se van!” and merengue music. #ProtestaRD #ProtestasJCE pic.twitter.com/y68DWeHr3R

David Aquino, one of the main organizers, pulled out his phone and began recording.

“This is a message from all the Dominicans in the Tampa Bay area who feel outraged and tired of the government over there that has stolen everything,” he said in Spanish, his voice booming. 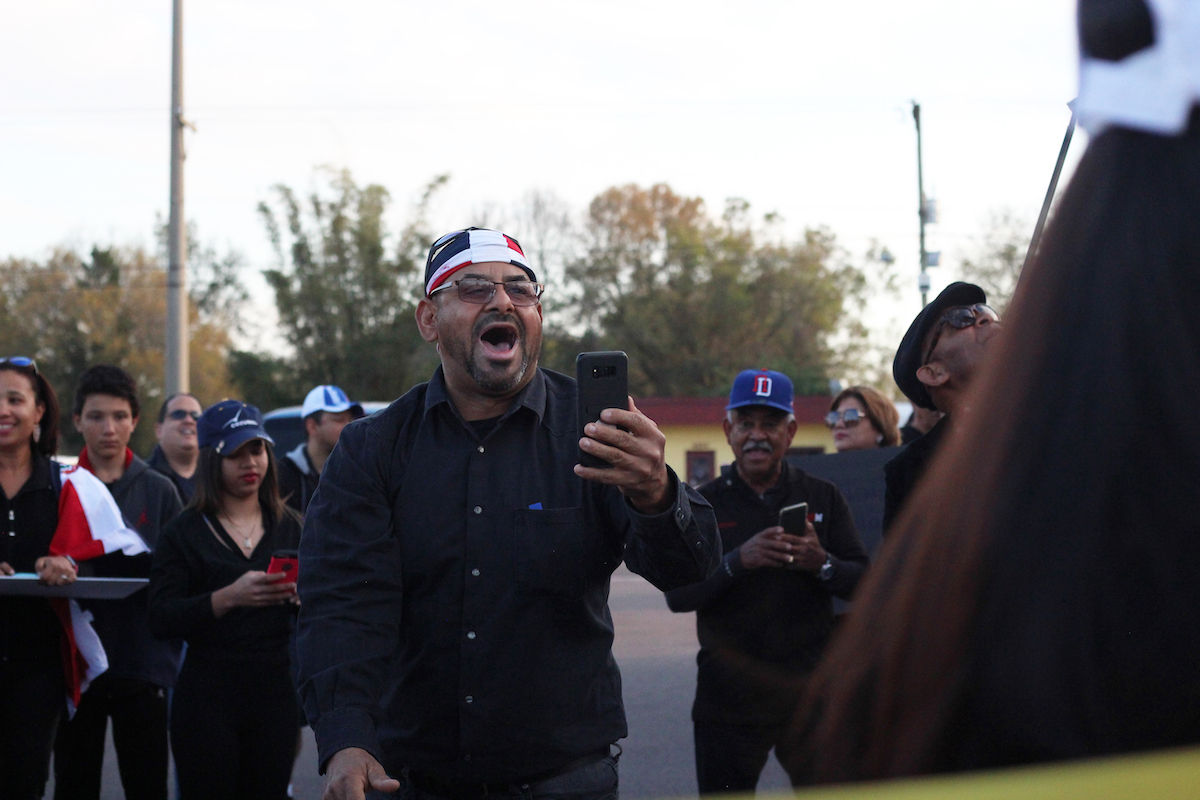 Aquino, a 53-year-old warehouse worker, paced in the parking lot while leading the thickening crowd into chants.

“¡Por ladrones! [For being thieves!]” another man added.

A microphone was later brought out and Aquino gave other protestors an opportunity to air their grievances over the canceled elections and ensuing scandal. A few spoke out from behind large Dominican flags that rippled further in the wind.

“We wanted to come and represent because our homeland is in danger,” said Arcenia Reynoso, 54, of Tampa. “Our democracy could be at risk because this is the first time in history that a voting event has been canceled. Our elections are what have distinguished that we have a democracy, even if it is limited.”

William Ortiz, 78, doesn’t go out much these days, according to his daughter, Yira Ortiz Vizcaino. But here the retired businessman was standing with other protestors.

“We’ve never seen anything like this. Una vagabundería [vagrancy] ,” Ortiz said disapprovingly in Spanish. “The only ones who know what happened is the junta. The government.” 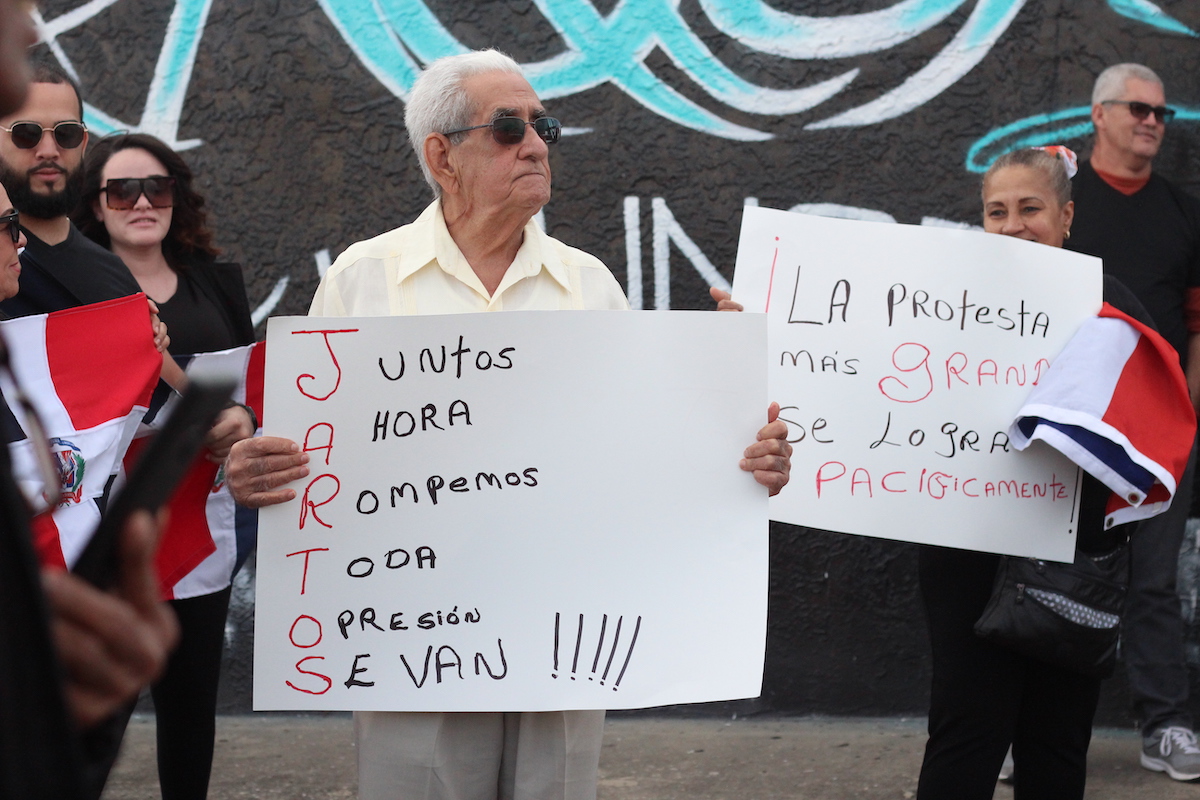 Luisana Nova, 32, of Tampa, was among the most outspoken at Saturday’s protest. Many in the crowd nodded in agreement as she spoke about their love for la patria, their homeland. At Nova’s side was her 8-year-old son, Luis Arturo Rojas. Mother and son held three large posters. A neon pink one written in Spanish read: “Dominicanos en Tampa unidos por la democracia [Dominicans in Tampa united for democracy].”

“I think it’s very unfair that they want to take away the right for us to choose our leaders. It’s assumed that in a democracy we should have the right to choose who will lead the nation, and it’s not perpetual. They can’t perpetuate their power,” a frustrated Nova said in Spanish. “If they take away our right to vote and set up traps every time there’s an election, then there’s no democracy. There are no rights.” 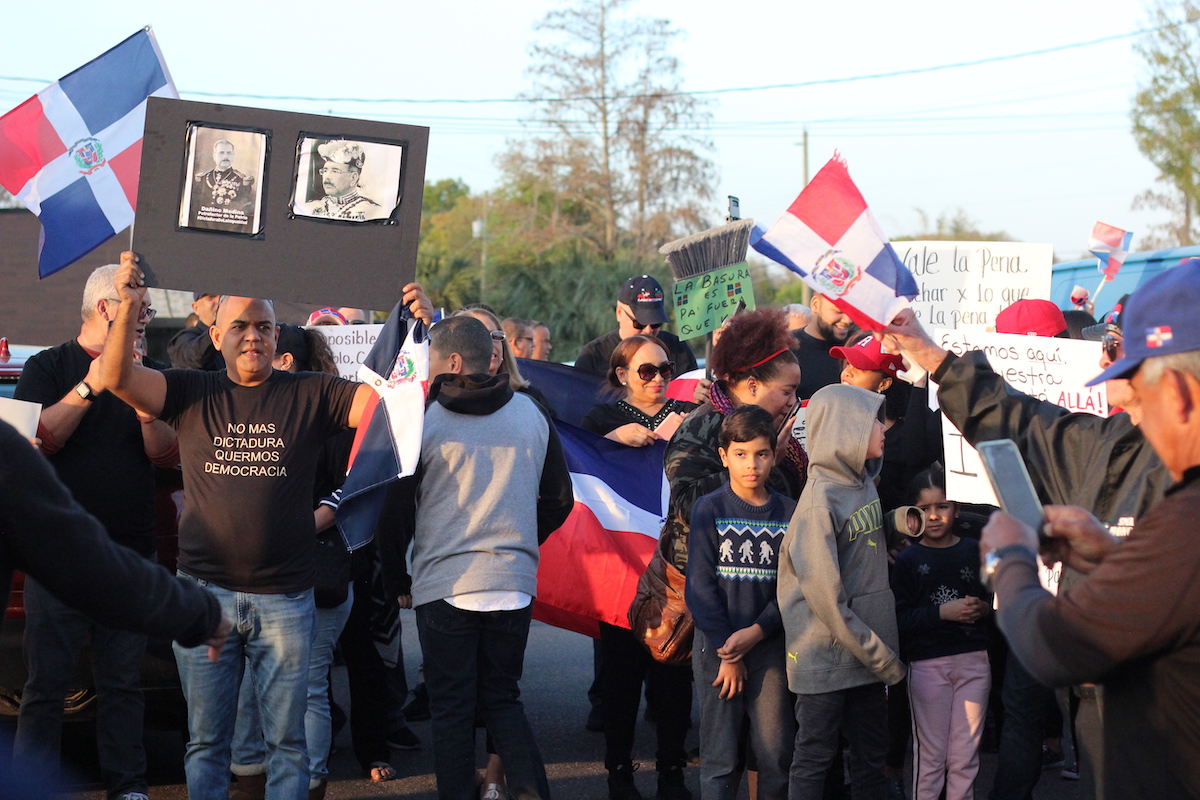 A crowd gathers on February 22, 2020 in Tampa, Florida, to support citizens in the Dominican Republic who have been protesting for days after elections were canceled in the country. (Photo by Amaris Castillo/Latino Rebels)

Nova peered down at her son. Luis’ sign stated he was defending the future of his little cousins in the Dominican Republic.

“This is why we’re out here fighting. The government has to realize that the people are the ones with the power,” Nova said. “We choose them so that they lift us, not so they can serve themselves from us.”

Amaris Castillo is a Florida-based journalist. She is the creator of Bodega Stories and tweets from @AmarisCastillo.