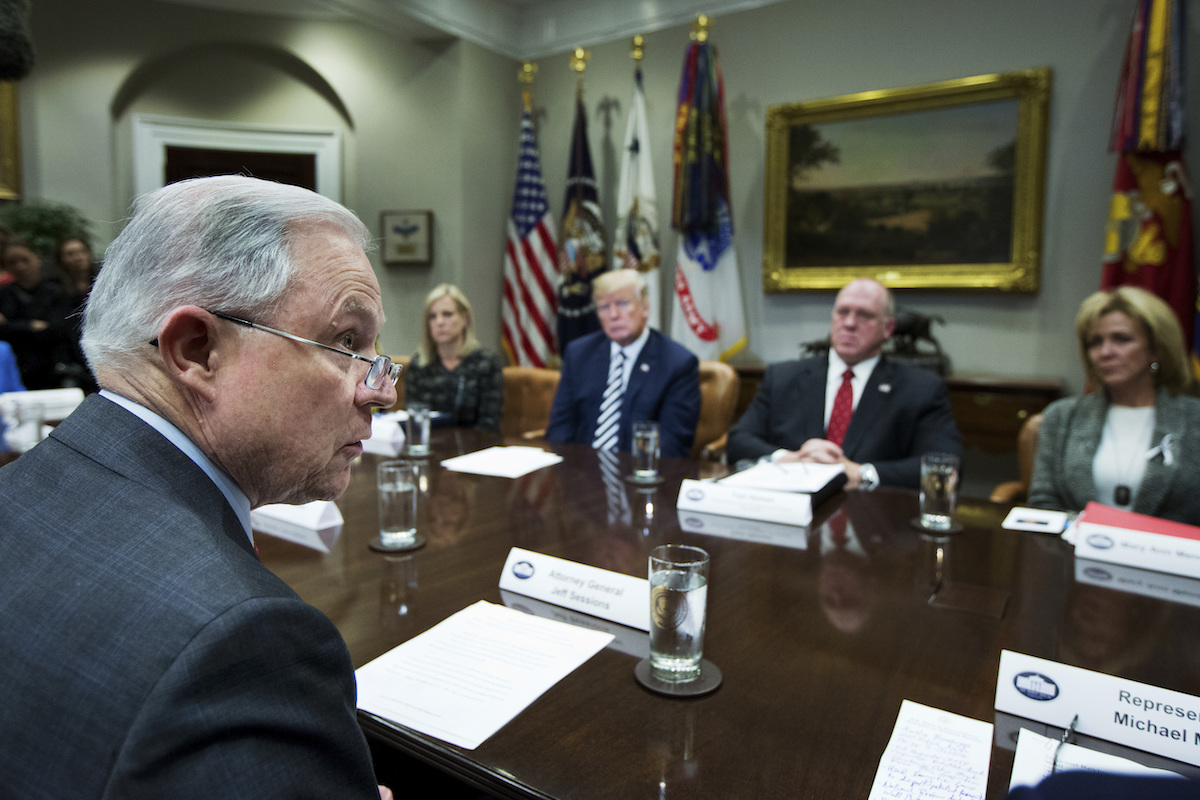 In this Tuesday, March 20, 2018 file photo, Attorney General Jeff Sessions, left, speaks during a roundtable talk hosted by President Donald Trump, third from right, in the Roosevelt Room of the White House, in Washington. The Trump administration can withhold millions of dollars in law enforcement grants to force states to cooperate with U.S. immigration enforcement, a federal appeals court in New York ruled Wednesday, February 26, 2020 in a decision that conflicted with three other federal appeals courts. (AP Photo/Manuel Balce Ceneta)

The states and city sued the U.S. government after the Justice Department announced in 2017 that it would withhold grant money from cities and states until they gave federal immigration authorities access to jails and provide advance notice when someone in the country illegally is about to be released.

Before the change, cities and states seeking grant money were required only to show they were not preventing local law enforcement from communicating with federal authorities about the immigration status of people who were detained.

At the time, then-Attorney General Jeff Sessions said: “So-called ‘sanctuary’ policies make all of us less safe because they intentionally undermine our laws and protect illegal aliens who have committed crimes.”

In 2018, the Justice Department imposed additional conditions on the grant money, though challenges to those have not yet reached the appeals court in New York.

The 2nd Circuit said the plain language of relevant laws make clear that the U.S. attorney general can impose conditions on states and municipalities receiving money.

And it noted that the U.S. Supreme Court has repeatedly observed that the federal government maintains broad power over states when it comes to immigration policies.

In the past two years, federal appeals courts in Chicago, Philadelphia and San Francisco have ruled against the federal government by upholding lower-court injunctions placed on the enforcement of some or all of the challenged conditions.

“While mindful of the respect owed to our sister circuits, we cannot agree that the federal government must be enjoined from imposing the challenged conditions on the federal grants here at issue,” the 2nd Circuit three-judge panel said in a decision written by Judge Reena Raggi.

The Justice Department praised the decision, issuing a statement calling it a “major victory for Americans” and saying it recognizes that the attorney general has authority to ensure that grant recipients are not thwarting federal law enforcement priorities.

The department added that the ruling’s effect will be limited because other courts have ruled the other way, giving the plaintiffs in the New York case the opportunity to point to those as reasons to ignore the new conditions.

Cody Wofsy, a staff attorney with the American Civil Liberties Union, called the decision a “real outlier,” saying he believed the 2nd Circuit was the nation’s first court to side with the Trump administration on the issue.

“Over and over, courts have said the Department of Justice doesn’t have authority under governing statutes to impose these conditions,” he said. “These conditions are part of the administration’s attempts to bully, cajole and coerce state and local governments into participating in federal immigration enforcement activities.”

Under the Constitution’s federalism principles and the 10th Amendment, Wofsy said, states and municipalities “are entitled to decline to become part of the administration’s deportation force.”

In a statement, New York City Mayor Bill de Blasio said Trump’s “latest retaliation against his hometown takes away security funding from the number one terrorist target in America—all because we refuse to play by his arbitrary rules.”

He added: “We’ll see President Trump back in court and we will win.”

Bitta Mostofi, commissioner of the city’s Office of Immigrant Affairs, said in a statement that the ruling was deeply troubling.

“New York City stands with our immigrant brothers and sisters and that will never change,” Mostofi said.

The appeals rulings pertain to the issuance of the Edward Byrne Memorial Justice Assistance Grant Program.

Created in 2006, it is the vehicle through which Congress annually dispenses over $250 million in federal funding for state and local criminal justice efforts.

The Byrne Program was named for New York City Police Officer Edward Byrne, who at age 22 was shot to death while guarding the home of a Guyanese immigrant cooperating with authorities investigating drug trafficking.