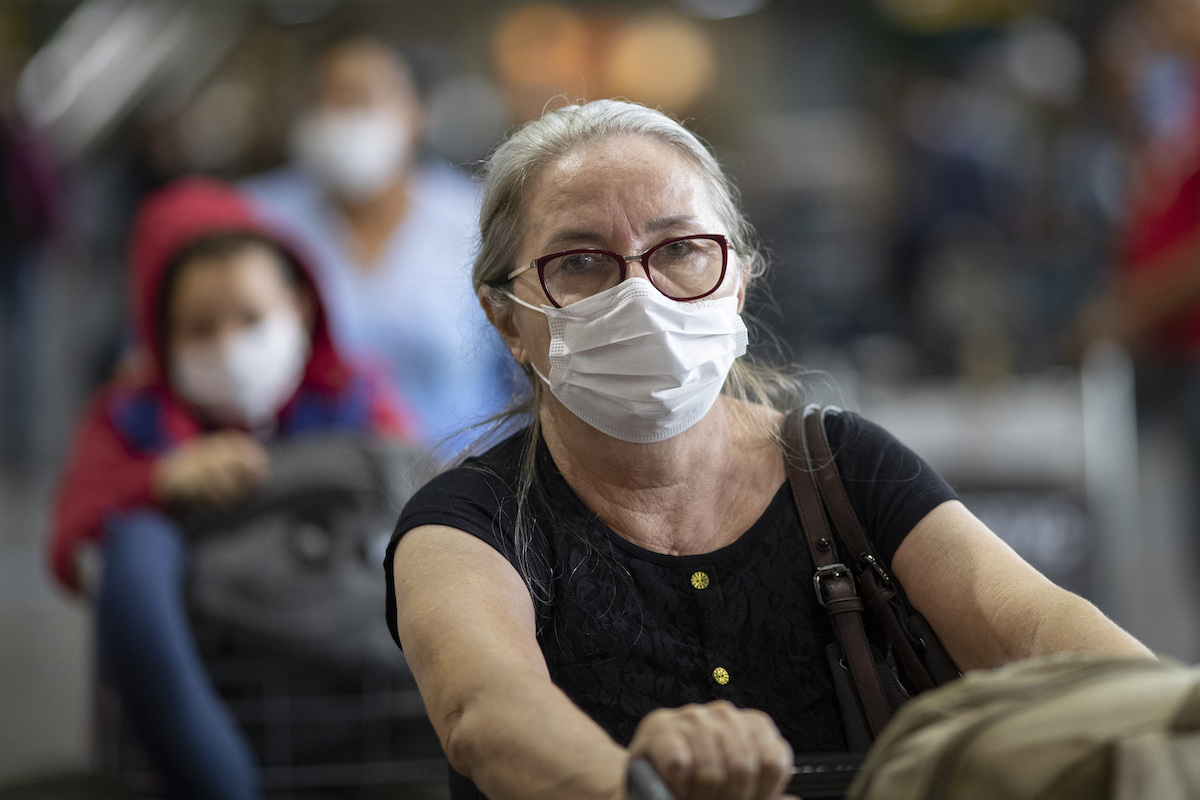 Passengers wear masks as a precaution against the spread of the new coronavirus COVID-19 as they arrive to the Sao Paulo International Airport in São Paulo, Brazil, Thursday, February 27, 2020. (AP Photo/Andre Penner)

SÃO PAULO (AP) — Signs of anxiety appeared Thursday among Brazilians after Latin America’s first case of the new coronavirus was confirmed in Sao Paulo, and the number of suspected cases skyrocketed, even as the government sought to reassure the population about preventative measures.

In the city’s international airport, the largest in South America, some people wore masks. Several stores began to make hand sanitizer available and some airport workers in contact with passengers used facial protection.

Simone de Almeida, 58, was preparing on Thursday morning to travel to Lisbon, Portugal, and had some reservations.

“I’m not so worried about Brazil yet, but it seems this is getting worse in Europe. I considered canceling my trip, but my family calmed me down. I’m wearing a mask because I will be on a flight for 10 hours. I need to do something,” de Almeida told The Associated Press.

“I thought they would give us masks to keep working, but they haven’t. My manager said we would receive them soon. I’m a little scared,” said Silveira.

David Uip, coordinator of the coronavirus contingency center in São Paulo, said at a press conference on Thursday that the vast majority of those infected by the virus will be asymptomatic or suffer only slight impact. He added that people with respiratory discomfort should seek medical attention. 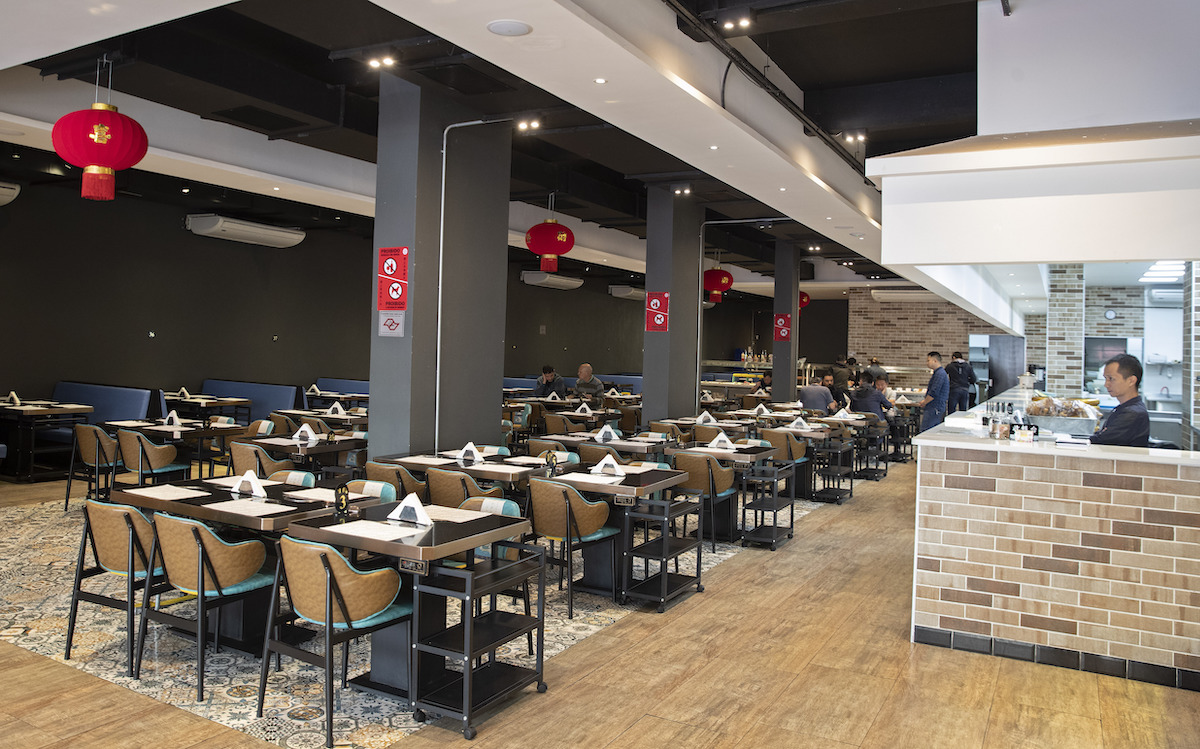 A Chinese restaurant is almost empty during lunch hour in the Asian neighborhood of Liberdade in São Paulo, Brazil, Thursday, February 27, 2020. According to the restaurant manager, fears of new coronavirus COVID-19 outbreak have reduced business over the past weeks. (AP Photo/Andre Penner)

Brazilian Health Minister Luiz Henrique Mandetta regretted that Brazil’s first case of the virus, in a 61-year-old businessman who had traveled to Italy, was confirmed in Latin America’s most populous city. At the same time, Mandetta was optimistic about the government’s actions to mitigate the impact.

“Here we have a system that has the greatest musculature, the greatest response, a health system with management and committed people. It was the first metropolis to eliminate transmission of HIV from mother to child,” said Mandetta.

To contain the new coronavirus, the health ministry decided to push up the date for its national flu vaccination campaign to March 23. Despite being different viruses, Mandetta explained it will help avoid confusion stemming from the presence of similar symptoms that can overload the health system. The government plans to administer 75 million doses of flu vaccine.

In addition, the health ministry launched a page dedicated to combating the spread of fake news about the coronavirus.

Many specialists appeared on the main television channels and radio stations on Thursday, answering questions from citizens about how to avoid contagion and dispelling false rumors. 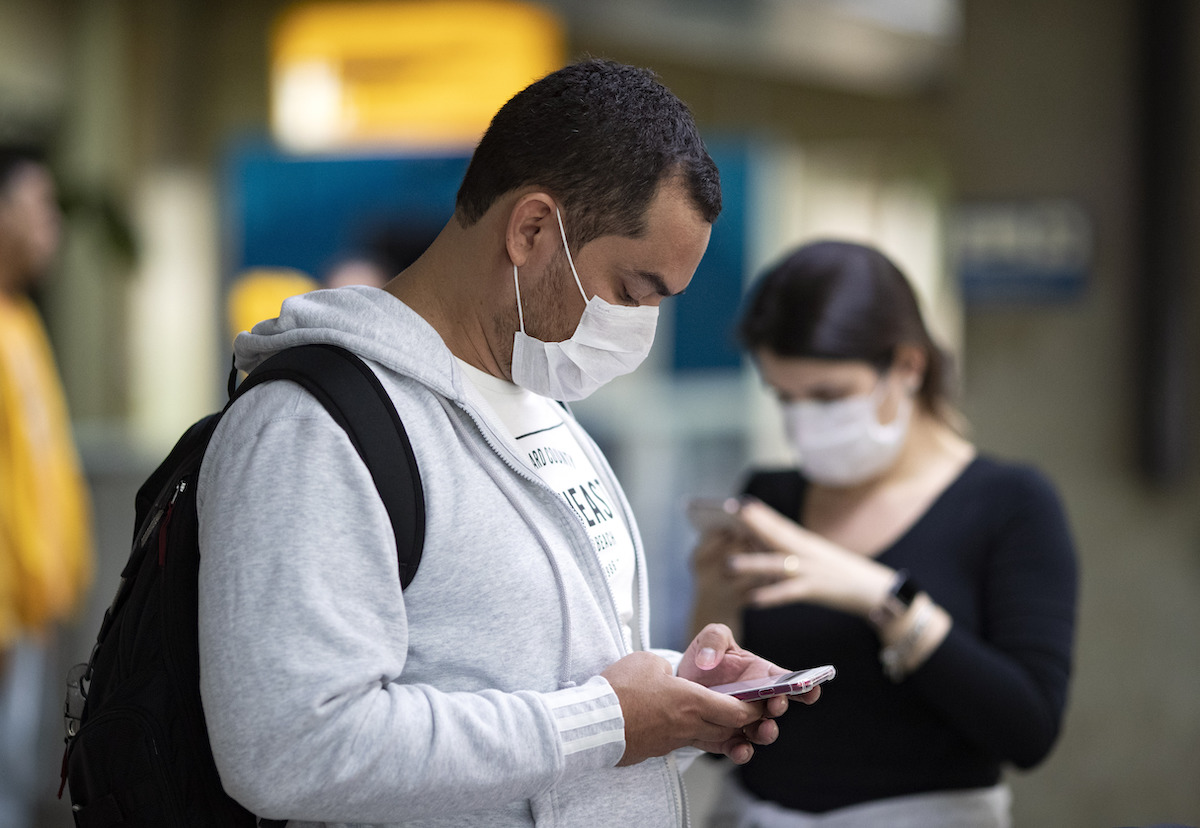 Passengers wearing masks as a precaution against the spread of the new coronavirus COVID-19 use their phones at the Sao Paulo International Airport in São Paulo, Brazil, Thursday, February 27, 2020. (AP Photo/Andre Penner)

In two travel agencies visited by The Associated Press, employees said they had received increased calls from customers to confirm if scheduled trips had suffered alterations.

With the news of the advance of the virus outside China, mainly in Europe, some decided to rethink trips to the continent. One of the three agencies had cancellations of trips to France and Italy.