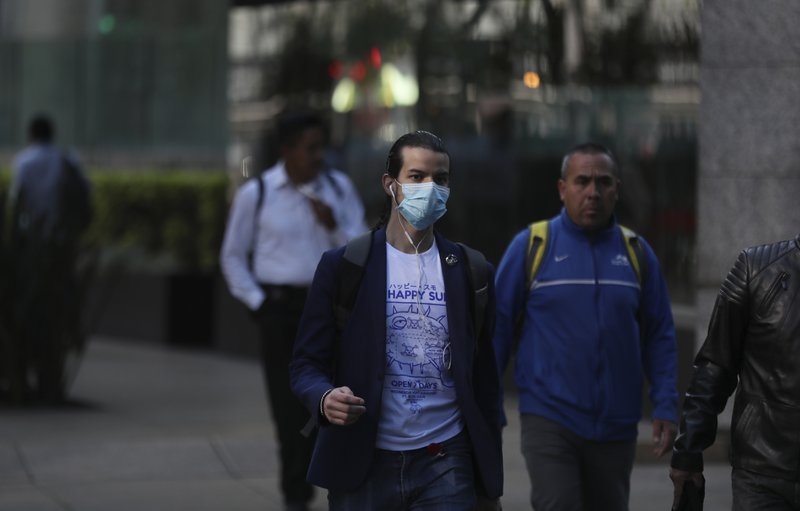 A man wears a mask over his mouth as a precaution against the spread of the new coronavirus COVID-19 in Mexico City, Friday, February 28, 2020. (AP Photo/Fernando Llano)

Hugo López-Gatell said one of the patients is in Mexico City and the other in the northern state of Sinaloa. While a second test is still pending on that case, he said, “We are treating this as confirmed.” Neither is seriously ill; one is in isolation at a hospital, the other is isolated at a hotel.

At least five family contacts of the first patient have been placed in isolation. He said the men had traveled to the northern Italian region where there has been an outbreak and had returned to Mexico between last Friday and Saturday.

President Andrés Manuel López Obrador appeared to downplay the seriousness of the COVID-19 virus, saying “it isn’t even equivalent to flu.”

Seasonal flu kills more people because it has infected far more people, but the new virus appears to have a far higher mortality rate.

In the central China city of Wuhan, where the new coronavirus first exploded, 2% to 4% of patients have died, according to the World Health Organization. But in the rest of China, the death rate has been 0.7%. On average, the death rate from seasonal flu is about 0.1%.

“I repeat, according to the available information, it is not something terrible, fatal,” López Obrador said. “There shouldn’t be any yellow journalism, or exaggerations, to cause a mass psychosis of fear, of terror.”

Brazil on Wednesday confirmed Latin America’s first confirmed case of the new coronavirus in a man who traveled to Italy this month.

López-Gatell also said that Mexico’s traditional culture of hearty handshakes, friendly hugs and kisses as a form of greeting must change.

López-Gatell drew a chuckle from the president when he suggested replacing those greeting with a self-hug, a gesture that López Obrador frequently uses in front of large crowds when he can’t greet people individually.