Court Halts Trump Asylum Policy, Then Suspends Its Own Order 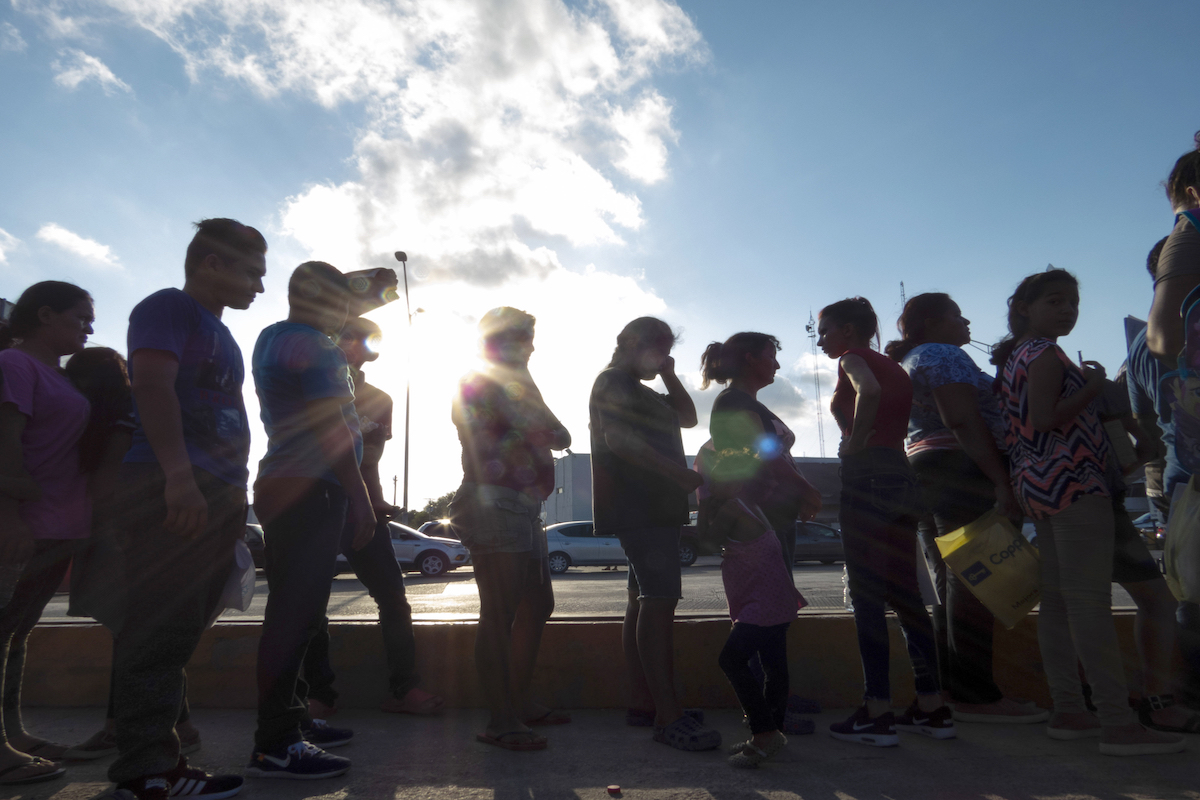 In this Oct. 5, 2019 file photo, migrants seeking asylum wait in line with their case paperwork during a weekly trip by volunteers, lawyers, paralegals and interpreters to the migrant campsite outside El Puente Nuevo in Matamoros, Mexico. (Denise Cathey/The Brownsville Herald via AP, File)

SAN DIEGO (AP) — A 9th U.S. Circuit Court of Appeals panel voted unanimously Friday to suspend an order it issued earlier in the day to block a central pillar of the Trump administration’s policy requiring asylum seekers to wait in Mexico while their cases wind through U.S. courts.

The three-judge panel told the government to file written arguments by the end of Monday and for the plaintiffs to respond by the end of Tuesday.

The Justice Department said at least 25,000 asylum seekers subject to the policy are currently waiting in Mexico and expressed “massive and irreparable national-security of public-safety concerns.”

Government attorneys said immigration lawyers had begun demanding that asylum seekers be allowed in the United States, with one insisting that 1,000 people be allowed to enter at one location.

Customs and Border Protection had already begun to stop processing people under the policy.

“We will continue working to permanently end this unspeakably cruel policy,” she said.

The government’s setback earlier Friday from the three-judge panel of the 9th U.S. Circuit Court of Appeals may prove temporary if President Donald Trump’s administration appeals to the U.S. Supreme Court, which has consistently sided with Trump on immigration and border security policies. Chad Wolf, the acting Homeland Security secretary, said he was working with the Justice Department to “expeditiously appeal this inexplicable decision.”

The “Remain in Mexico” policy, known officially as “Migrant Protection Protocols,” took effect in January 2019 in San Diego and gradually spread across the southern border. About 60,000 people have been sent back to wait for hearings, and officials believe it is a big reason why illegal border crossings plummeted about 80% from a 13-year high in May.

Christopher Landau, the U.S. ambassador to Mexico, said in a court filing that halting the policy creates “substantial risk of immediate chaos on the border.”

The ambassador said the policy is critical to deterring “uncontrolled of third-country migrants through Mexico to the United States” and that halting it would encourage more asylum-seekers to come and “obliterate the substantial progress that both countries have made over the last year.”

Reaction to the decision blocking the policy was swift among immigration lawyers and advocates who have spent months fighting with the administration over a program they see as a humanitarian disaster, subjecting hundreds of migrants to violence, kidnapping and extortion in dangerous Mexican border cities. Hundreds more have been living in squalid encampments just across the border, as they wait for their next court date.

Advocates planned to have immigrants immediately cross the border and present the court decision to authorities Friday, with group Human Rights First hand-delivering a copy to U.S. Customs and Border Protection officers at a bridge connecting Laredo, Texas, and Nuevo Laredo, Mexico. Lawyers were hoping to get their clients before U.S. immigration court judges.

The decision interrupted some court cases. Immigration Judge Philip Law in San Diego delayed a final hearing on a Honduran man’s asylum case to April 17 after a government attorney couldn’t answer his questions about the effect of ruling, which temporarily halts the policy during legal challenges. The government attorney said she asked her supervisor how to address the ruling and that he didn’t know what to do either.

In El Paso, an administrator came to tell a judge of the ruling as he heard the case of a Central American mother and her partner. The couple cried when they learned they could get into the U.S. with restrictions. The couple and their two young children will be put into government detention to wait and they won’t have to return to Ciudad Juárez, Mexico.

“Do you guys understand that?” Herbert asked through an interpreter. “There was a pretty significant change in the law in the middle of your testimony.”

The Justice Department sharply criticized the ruling, saying it “not only ignores the constitutional authority of Congress and the administration for a policy in effect for over a year, but also extends relief beyond the parties before the court.” Wolf, the acting Homeland Security secretary, called the decision “grave and reckless.”

Judge William Fletcher, writing the majority, sided with the American Civil Liberties Union and other advocacy groups who argued the policy violates international treaty obligations against sending people back to a country where they are likely to be persecuted or tortured on the grounds of race, religion, ethnicity, political beliefs or membership in a particular social group.

Fletcher agreed the government set the bar too high for asylum-seekers to persuade officers that they should be exempt from the policy and didn’t provide enough time for them to prepare for interviews or consult lawyers. The judges said the government also erred by requiring asylum-seekers to express fear of returning to Mexico to be considered for an exemption, instead of asking them unprompted.

Fletcher quoted at length asylum-seekers who reported being assaulted and victimized in Mexico, saying it was “enough—indeed, far more than enough” to undercut the government’s arguments.

Fletcher was joined by Judge Richard Paez, who were both appointed to the bench by President Bill Clinton. Judge Ferdinand Fernandez, an appointee of President George H.W. Bush, dissented.

Rabinovitz said Justice Department officials informed the ACLU that they will ask the Supreme Court to reinstate the policy and that the nation’s highest court could step in “very soon.” Until then, she said, no one can be returned to Mexico under the policy. It was unclear when those in Mexico with pending cases may return to the U.S. but it may be when they cross for their next hearings.

The appeals court in San Francisco also decided to keep another major Trump policy on hold, one that denies asylum to anyone who enters the U.S. illegally from Mexico.

The ruling’s impact will also be at least partially blunted by other policies introduced in response to unprecedented surge of asylum-seeking families that peaked last year, many of them from Guatemala, Honduras and El Salvador.

Another policy leads Mexicans and Central Americans who fail an initial screening to be rapidly deported without leaving Border Patrol stations. The screening interview is designed to take place in one day and any appeals to an immigration judge within 10 days. Asylum-seekers are given up to 90 minutes to contact a lawyer.

The other measure with far-reaching consequences denies asylum to anyone who passes through another country on the way to the U.S.-Mexico border without seeking protection there first. It took effect in September and is being challenged in a separate lawsuit.

Supporters of the “Remain in Mexico” policy note it has prevented asylum-seekers from being released in the United States with notices to appear in court, which they consider a major incentive for people to come.

Mexicans and unaccompanied children are exempt.

Asylum has been granted in less than 1% of the roughly 35,000 Remain in Mexico cases that have been decided. Only 5% are represented by attorneys, many of whom are reluctant to visit clients in Mexico.