Which Side Are You On? (OPINION) 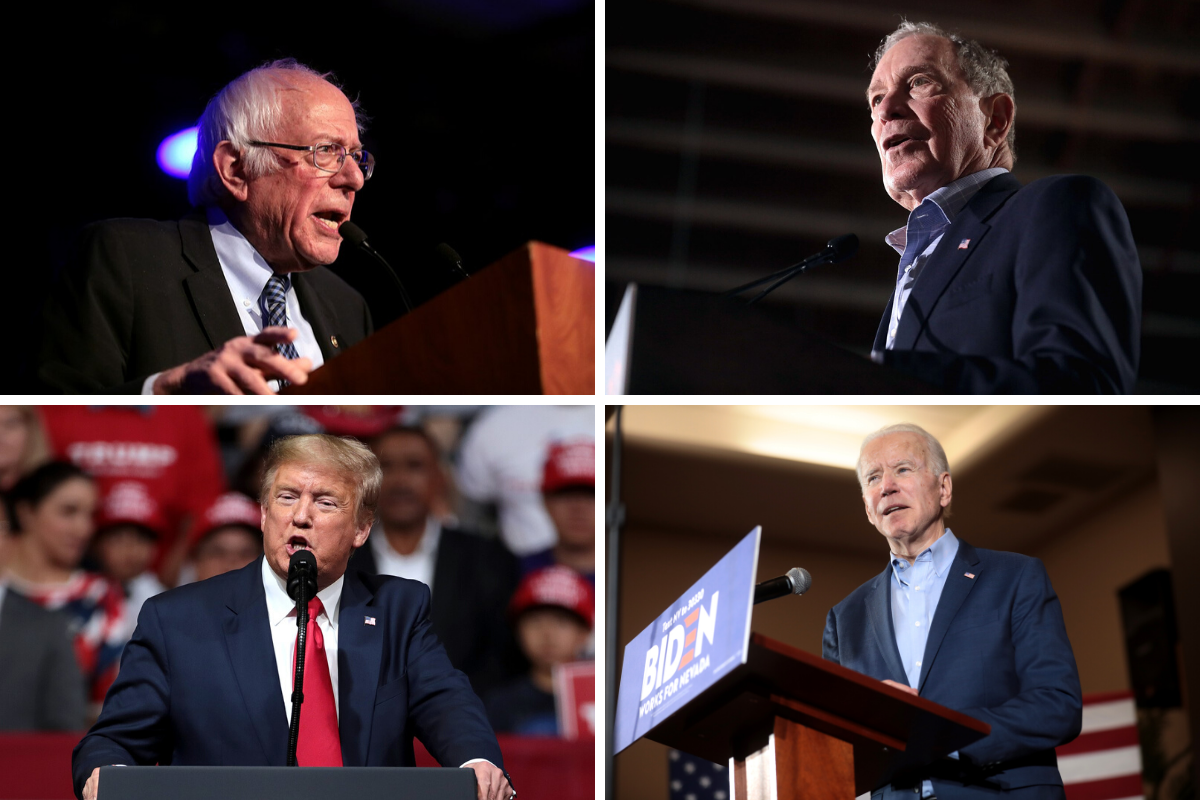 LAS VEGAS — A recent poll in Illinois shows Bernie Sanders and Mike Bloomberg nearly neck-and-neck in the Land of Lincoln. Damned if I know why most people seem unable to decide between socialism and barbarism. Bernie Sanders’ base is at around 30 percent, and Trump’s base at another 30, right? Which means a good 40 percent of the nation is stuck somewhere between human liberty or spiritual death.

The middle road —Clinton’s “Third Way”— is the tamed capitalism of corporate lore. Since Dickens’ day, we’ve been promised the all-devouring Beast can be put on a diet and trained not to bite the hands that feed it; that, with a few laws here and there, capitalism can be forced to benefit the masses and not just our masters. But like the Tyrannosaurus in Jurassic Park, or the mighty Tilikum, capitalism can’t be penned in—capitalism needs to hunt. And the resources of this planet, both human and natural, are its sole prey.

Some readers will deny this, arguing that capitalism has merely gotten out of hand, thanks to a few greedy and criminal actors. Yet look around: Capitalism is what capitalism does. For as the Scriptures read, “every tree is known by his own fruit,” and the trees on Wall Street bear bitter fruit, indeed.

If our biological imperative is to fuck, capitalism’s economic imperative is to fuck things up—producing tons of material wealth in the meantime, granted, yet simultaneously destroying the spiritual wealth of our species, along with the natural wealth of this once bountiful planet. We were once lent an Eden, but have since pawned it for skyscrapers and flatscreens.

And for the cars and clothes we willing enslave ourselves —to our bosses, to the Machine— living like happy mindless gears whose only function is to grind till we break and get chucked away. We accept barbarism so long as it looks sexy on Instagram.

Enter Mike Bloomberg, a billionaire Republican running for the Democratic nomination—the third güey. A lot of the 40-percenters are warming up to the guy, viewing him as a happy medium between Trump’s barbarism and Bernie’s socialism. He’s merely Trump Lite—less flavor, and still bad for you. Anything that isn’t full socialism, anything that isn’t completely for human liberation, is Barbarism Lite.

The President and Bernie are the polar opposite answers to the same basic question: Who is this planet for? That being the case, if someone isn’t with Bernie, then they must face the fact that they support, at least in some tiny way, what the Trump administration does and stands for. You even hear as much from  the Democratic Establishment media, those corporate sycophants who call themselves journalists and talk as if they’d rather have Trump, a bogus billionaire bozo who sides with white nationalists —fascism par excellence— they’d rather have him steering the country for another four years than to let Bernie anywhere near the wheel. The Democratic leadership itself prefers to weaken the party than allow the candidate with the most votes win the nomination—you know, democracy. Because kids in cages isn’t as bad as Medicare for All. Because Nazis working in the White House is more tolerable than canceling student debt. Because while the planet is going to shit, saving Earth can wait till we find a moderate pragmatist, someone selling a little socialism mixed with a little barbarism—someone like Biden or Bloomberg.

“But we need someone who can run the country like a business.”

I’ve been hearing this bit of barbarism since I was a boy. It seems sound to a sick mind. After all, capitalist culture has trained us to believe that to be a billionaire businessman is the height of human potential—fuck teachers, poets and construction workers, those pathetic chumps. We worship the capitalist class because money is power, and human beings have always bent over before the altar of the all-powerful, whether God or Mammon, Bill Gates or Sheldon Adelson.

We are slaves to power, dancing to its tune. The most popular form of music for a while now, rap, rhymes about money and power ad nauseam and ad absurdum.

A business, no matter what it does —if it makes bombers or fidget spinners, sells medicine or health insurance— a business exists to do one thing: make a profit. A profit is unpaid wages: something they don’t teach you in Econ 101. A profit is the money leftover after the boss buys all the stuff he needs to make the thing he’s going to sell —the office space, the computers, desks, chairs, the electricity, etc., not to mention the raw materials, if he’s a manufacturer— plus the workers whose labor is being rented by the hour. That there is any leftover at all means the workers produced something for a certain cost which the bossman then sold at a higher price, meaning the workers were underpaid for the value they created through their labor. The bossman likes to think he deserves that little extra he was able to swindle from both his workers and his customers—that however much he pays himself, he “earned“ every cent of it, and that his workers should just be grateful they still have a job—and most of us agree with the bossman because, as I’ve pointed out, we’re suckers for money and power.

No matter how well or how poorly a company does business, as long as it continues to make a profit, it will enjoy a happy and healthy existence. Its buildings may burn, all its employees may die in a pandemic, but if the company still manages to pull out a profit, it will live to see another quarter. The company doesn’t care, because it cannot care, about anything else —not the trees, not the whales, not human beings— nothing but profits. And if any company seems to care about things outside of profit-making, it’s only because the company believes those other things somehow affect its profits.

Capitalism is anti-life. And “you cannot serve two masters,” as the Good Books teaches—you can’t be pro-capitalism and pro-life.

Imagine a country run like a business; you don’t even have to try very hard. In a company, when costs get high and profits dip, workers are fired. So in a country run like a company, when the costs of providing for everyone’s health and happiness begins to cut into the government’s profits, expect citizens to be let go: either through mass imprisonment, deportation or denaturalization, shipping much of the human slag off to one war or another to seize more oil for the Machine, or just letting millions of citizens die off through a variety of means—the government’s way of downsizing society.

A government, on the other hand, doesn’t need profits. Where would they go, if not back to the citizens? We know where the profits in a company go: straight up.

Government exists to do one thing: to provide for the health, safety and happiness of its citizens. Any government which does those things shall reign for a thousand years. Any regime which doesn’t do those things forever stands on wobbly knees. Which is why dictatorships are the weakest form of rule, and the more cruel the weaker still.

Aristocracies —or any form of government in which a small class dominates the rest of society— may persist so long as enough of the rabble believes the aristocrats live high on the hog for a reason (because they’re better) and that if each person works hard and smart enough, they too can join the aristocrats, someday. But as soon as the masses begin to see the aristocrats for what they are —no better than the rest— and as soon as the masses realize they have little to no chance of ever climbing up the social ladder, that the class line between the have-nots and the have-alls is defended by a big beautiful wall, then the time is ripe for a little revolt, if not a revolution.

Bernie is the last best hope not only for the proletarians of this country, but for the plutocrats, too. The difference between Bernie’s kind of socialism and Bakunin’s is that, with Bernie’s, society is purified with laws, whereas with Bakunin’s, society is purified with fires. So if the capitalist class wants to save its own skin, the choice is clear: it can either Feel the Bern, or watch it burn.

“Bernie can’t beat Trump, but Bloomberg can!”—another bunch of barbarism. Never mind that Bernie “That Commie Bastard” Sanders is the only presidential candidate in history—Democrat or Republican—to win the popular vote in the first three primary states. Or that a recent poll done by the Wall Street Journal and NBC News showed that a full 65 percent of Democratic voters are “enthusiastic” about the Sanders campaign—a news item you might find only after digging through heaps of articles claiming Bernie doesn’t have an altar boy’s chance in church. The Biden South Carolina win on Saturday is playing into that narrative as well, but it should be short-lived, since Super Tuesday is leaning way more to Sanders than to Biden.

And again, what’s this only rooting for the winners nonsense? Why is it ill-advised to fight for the candidate with the best ideas, rather than back the guy or girl who we think can beat the other team’s nominee? I’d hoped 2016 taught us to stop assuming we know what the rest of the country is thinking and what it wants. Few thought Trump would get nominated, and when he did, even fewer thought he could thump Hillary—remember how invisible she seemed circa July 2016? How wrong were we! (Well, not me.)

Let’s have a little faith in each other, a little faith in the democratic process, in the notion that a popular candidate with good ideas can beat a popular president with bad ones. Because if that isn’t true —if the only two roads ahead are Shit and Shittier, Biden/Bloomberg or Trump, barbarism or fascism— then why vote? Why choose between the lesser of two evils: to keep the pyramid scheme going? To preserve the plutocrats’ power a little longer? To make sure Wall Street lives to see another quarter?

The rich and powerful don’t need fighting for. So which side are you on—theirs, or yours and mine?