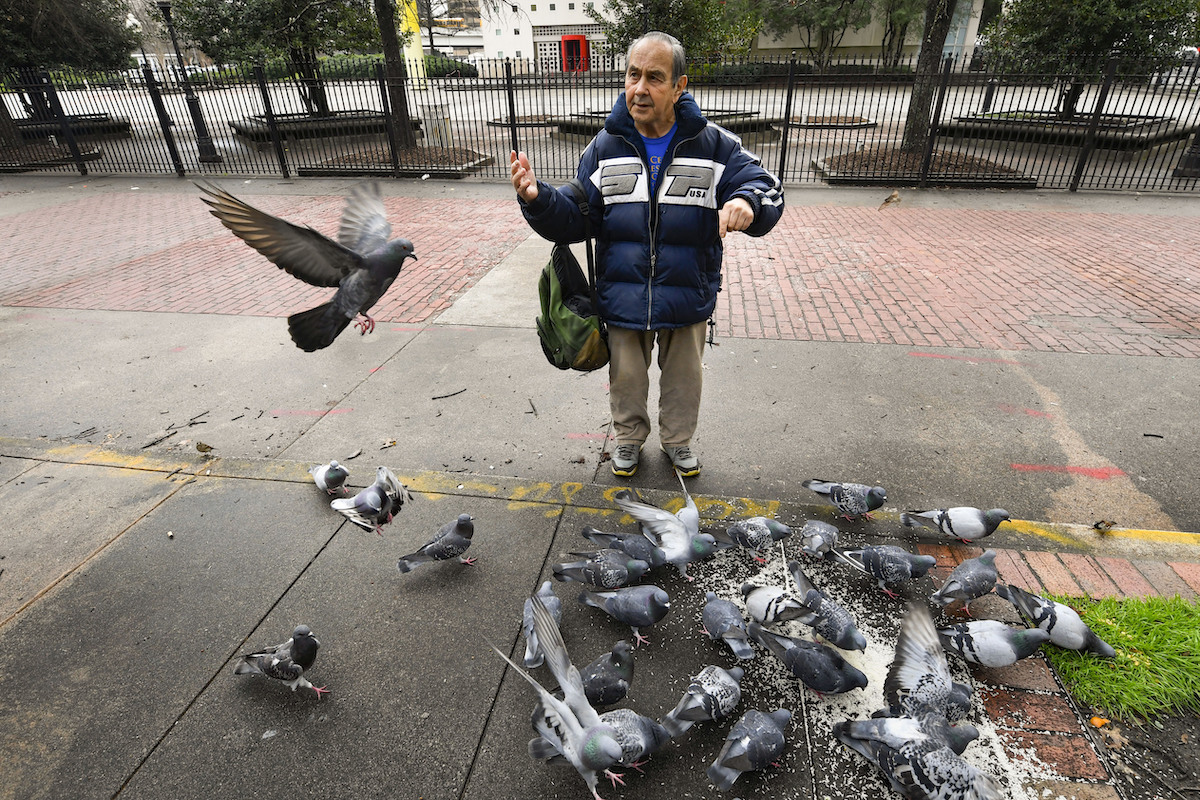 John Lokos summons a flock of birds with hand motions after dumping a bag of rice for them on a sidewalk, Tuesday, February 25, 2020, in Atlanta. Lokos, who makes it a habit to feed the birds downtown, has been in America since 1951 after fleeing Hungary during World War II, and authorities want to deport him from his Atlanta home. (AP Photo/John Amis)

ATLANTA (AP) — As he approaches a flock of pigeons on a downtown Atlanta sidewalk, John Lokos flaps his arms slowly to let them know he’s a friend. He pours peanuts and rice on the ground and puts his finger to his lips.

“They feel safe right now when we’re quiet,” he says, and the birds gobble up their snack.

Lokos visits the pigeons frequently to feed them from his own meager supply. His friends affectionately call him Bird Man and say his gentleness with the birds extends to everyone around him. But in 1963, he committed a brutal killing that sent him to prison for 45 years and could ultimately lead to his deportation, at 82 years old, to a country he left as a boy during World War II.

Dezso John Lokos, who goes by his middle name, was born in Hungary and adopted as a child. The family left Hungary in 1944 and arrived in the U.S. in 1951, when he was 14. His parents became citizens, but he never did, living instead as a legal permanent resident. He’s not proficient in Hungarian and has no ties to that country, his lawyers say.

U.S. Immigration and Customs Enforcement has told his attorneys it intends to deport him to Hungary by mid-March. ICE has said it prioritizes immigrants who’ve been convicted of serious crimes for deportation, and it’s customary for non-citizen immigrants to be turned over to the agency for deportation after completion of a prison sentence. But Lokos’ lawyers and friends hope the agency will reconsider in his case, arguing that he served his time —more than four decades in prison before parole— and that his physical and mental health are so poor that removing him from his routines and supportive community in Atlanta would be disastrous.

“I think we have reason to be concerned that if he’s returned to Hungary, he’s going to die on the streets,” said Sarah Geraghty, an attorney with the Southern Center for Human Rights, which represents him.

An ICE spokesman did not immediately have a comment on the case Monday.

Lokos suffers from schizophrenia, dementia and Parkinson’s disease, and his health has deteriorated significantly in recent years, friends and lawyers said. He’s collapsed multiple times, has trouble remembering words and names of friends, and relies on routine to function, they said. 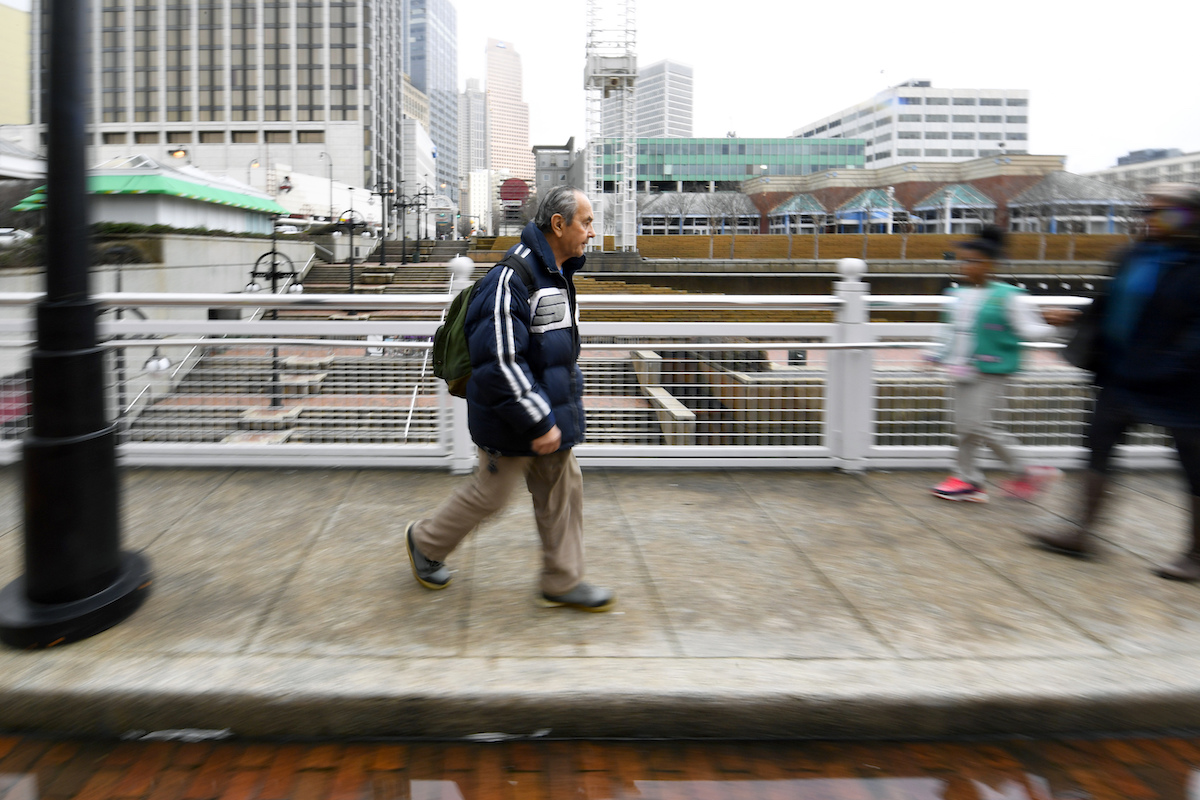 John Lokos carries peanuts and rice in his backpack as he walks along a downtown sidewalk looking for birds to feed Tuesday, February 25, 2020, in Atlanta. (AP Photo/John Amis)

The friends he’s made over the last decade in Atlanta through church involvement take care of his basic needs — rent, food and transportation to church services, 12-step recovery meetings and medical appointments. And they help zip his coat or dial his phone when his hands shake so badly he can’t do it himself.

“He no longer has the ability to navigate new and unfamiliar systems without the helping hands of his longtime supporters,” a friend, Mary Beth King, wrote in a sworn statement to be submitted to ICE. “He has those helping hands here, and nowhere else. Without them, there is no doubt in my mind that John will die.”

Lokos had a difficult, sometimes violent, relationship with his adoptive parents and displayed learning disabilities and other troubles early on, according to court documents. He was diagnosed with paranoid schizophrenia and underwent psychiatric hospitalizations.

While on conditional release following a two-year commitment in the mid-1950s, he disappeared without permission or notice and traveled around the country for years, falling in with some carnival workers, court documents show. He was with three of them in December 1963 when he bound and fatally shot an elderly man during a home invasion in Linden, Alabama, and dumped his body in a well.

Lokos was arrested less than a week later and was charged with first-degree murder. He was convicted and sentenced to death in 1964. His sentence was later commuted to life in prison, and he was granted parole in 2009. Upon release, he was placed in ICE custody and ordered deported.

Hungary refused to issue travel documents, so he was released in 2010 and has periodically reported to ICE as required. On February 7, his lawyers got notification that Hungary had issued travel documents and that ICE planned to deport him by mid-March.

His lawyers are asking, at a minimum, for his deportation to be delayed so arrangements can be made for medical and personal care. They’re also asking an immigration court to reopen his case and hoping ICE will reconsider its decision to deport him in light of his advanced age and dementia, Geraghty said.

She acknowledges that some people will have little sympathy for Lokos given his crime. She said his psychiatric condition and alcohol addiction played a role in the offense and noted that he’s been sober for years.

“I see little purpose in putting this dementia patient on a plane and sending him to a country where he hasn’t lived since 1944,” Geraghty said.

Services and housing in Hungary for elderly people are limited, particularly for those with special medical or mental-health needs, and homelessness is a crime there, according to experts who provided sworn statements for Lokos’ lawyers.

Michael Morgan, who was an organist at an Atlanta Presbyterian church, met Lokos in 2012. As a volunteer, Lokos did yard work, cleaned up after services and did other small jobs until he became too weak.

Morgan and his husband found Lokos an apartment and pay his rent. Every week or so, Morgan takes him to lunch and to buy groceries—crackers, cereal, canned soup and sandwich meat. Lokos is often quiet, eating every bite on his plate, but he likes to talk about his Bible study and art classes and is deeply spiritual, Morgan said. 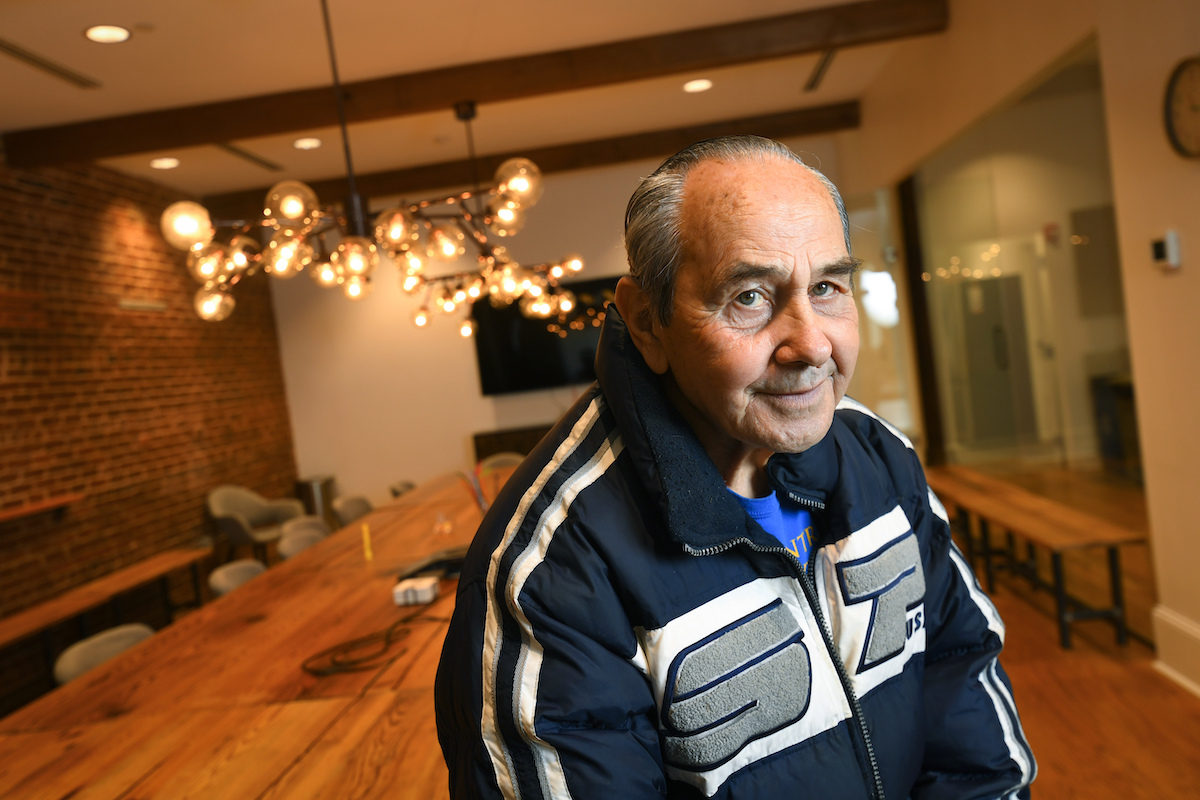 John Lokos, shown here at the Southern Center for Human Rights, has been in America illegally since fleeing Hungary in the 1940’s, and is in danger of being deported from his Atlanta home, shown Tuesday, February 25, 2020, in Atlanta. (AP Photo/John Amis)

Morgan remembers inviting Lokos to dinner at his home and asking him to say a pre-meal blessing: “He did a beautiful table grace. I think he probably does something like that before he opens his crackers at home.”

But Lokos’ deterioration worries Morgan. Morgan will call to say he’ll pick Lokos up in 20 minutes, only to arrive and find Lokos gone. Or they’ll make lunchtime plans and Lokos will call at 7:15 a.m. asking where Morgan is.

Lawyers wouldn’t allow Lokos to be interviewed, citing his health. But when an Associated Press writer and photographer accompanied him on a walk downtown, his community’s support was on display. A friend saw people she didn’t know photographing and talking to Lokos, so she called out to him to make sure he was OK.

Like others who’ve come to embrace Lokos, Catherine Hayes feels protective of him.