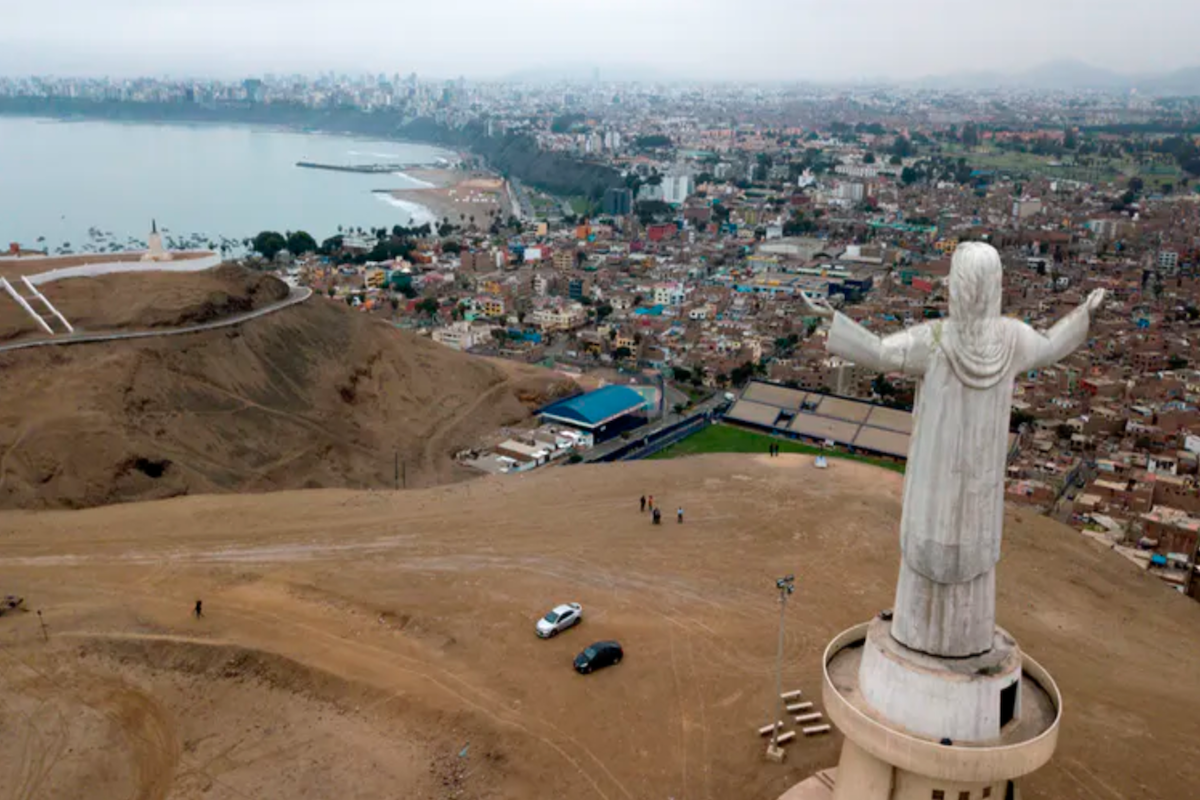 The ‘Christ of the Pacific’ statue in Lima has caused controversy in Peru because of its financing by a graft-tainted Brazilian construction company. Both religion and corruption loomed large in Peru’s 2020 legislative elections. (CRIS BOURONCLE/AFP via Getty Images)

Not only did voters elected 130 new legislators, replacing their entire Congress; they also brought into the fold a messianic religious group called the Israelites of the New Universal Pact.

After 40 years of failing to qualify for a national election, the political party of the Israelites —called the Agricultural People’s Front of Peru, or Frepap— won 15 congressional seats. In a fragmented Congress with nine parties, that makes the Israelites the third-largest legislative bloc.

The line between religion and politics has long been blurry in Peru. Both its mainstream parties (Acción Popular, the first-place vote-winners; and Alianza para el Progreso, with the second-most seats) have historical ties to Christian Democracy, a Catholic movement that gained popularity in 1950s Latin America with its centrist approach to economic development and conservative social values at a time of divisive Cold War rhetoric.

Frepap’s sudden popularity is likely a response to a challenging political moment.

A corruption scandal involving vote-buying and illegal infrastructure contracts has rocked Peru for years. It embroiled four past presidents and landed the daughter of jailed former dictator Alberto Fujimori in prison.

The recent election was called after President Martí Vizcarra dissolved Congress in September 2019. Peru’s 130 new legislators will serve out the final 18 months of the congressional term.

While short-lived, the incoming Congress appears to usher in a new political era in Peru—one in which voters find strict adherence to religious beliefs, no matter how fringe, an appealing alternative to systemic corruption. 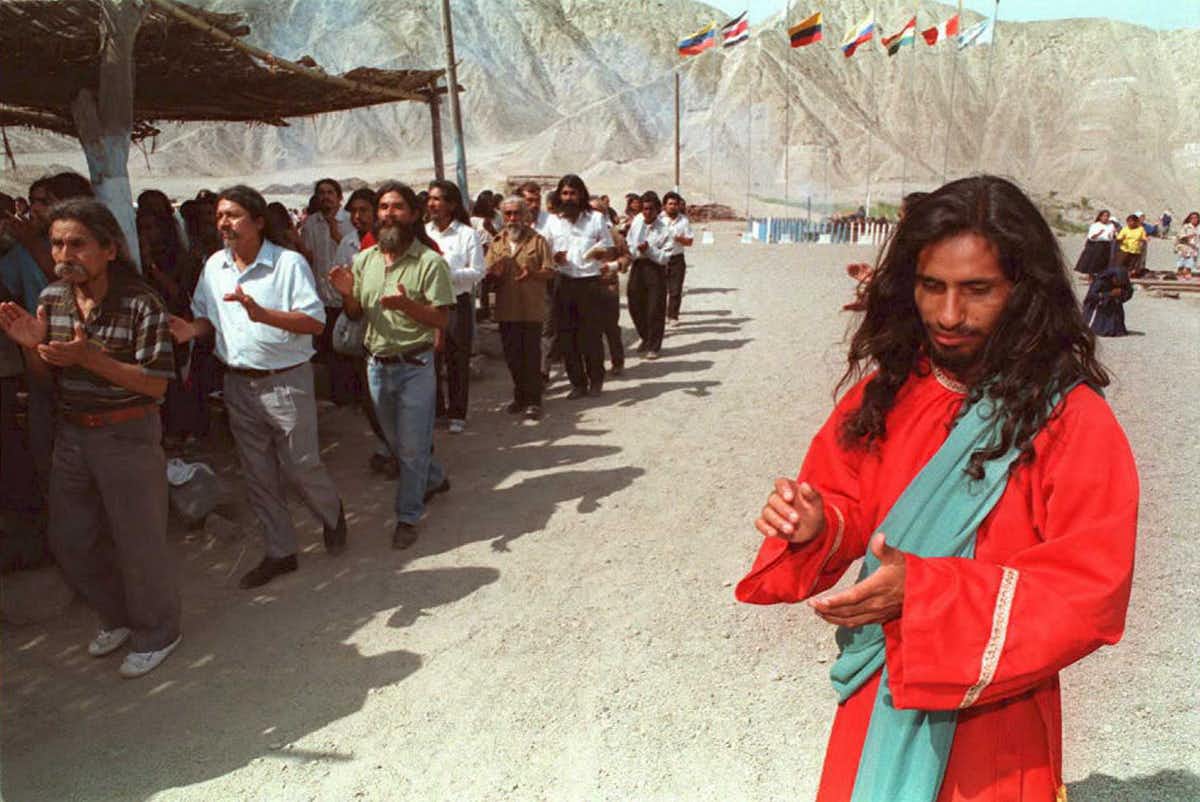 The Israelites of the New Universal Pact at a religious ceremony in Cieneguilla, Peru, in 1995. (MARIE HIPPENMEYER/AFP via Getty Images)

From the outset of the Spanish conquest in 1532, Catholicism has been the official religion of Peru. Indigenous Andean faiths, Judaism and Protestantism were all repressed, first under the Spanish Inquisition and later by the government.

Over the past century, however, Peru has become a more broadly Christian society. About 13% of Peruvians belong to Protestant denominations like the mainline United Methodist Church and the Pentecostal Assemblies of God.

Protestant groups have held significant political sway since at least the 1990 election when Alberto Fujimori, a Catholic, courted the evangelical vote and chose a Baptist minister as second vice president. This political alliance between conservative Catholics and evangelicals outlasted Fujimori’s dictatorship, which ended in 2001 with the restoration of democracy.

As my historical research shows, religious Peruvians with strong faith-based opinions about society but no political outlet have often turned their religious organizations —from Catholic women’s societies to rural Bible study groups— into vehicles of social change. Several evangelical churches have produced their own formidable grassroots political movements.

Over the past decade, popular movements have mobilized to block the legalization of same-sex civil unions and to protest gender-inclusive sex ed in schools.

This success has emboldened the religious right.

In Peru’s January 26 special election, every mainstream party on the right had an openly religious platform. The centrist Congressman-elect Alberto de Belaunde told the Guardian this campaign had “the most candidates linked to evangelist churches with an anti-rights discourse” he had ever seen.

From Fringe to the Mainstream

It’s not immediately clear where the Israelites of the New Universal Pact fit into this scene.

Its 15 congresspeople-elect have held very few public media appearances. Frepap was the only political party to refuse to meet with President Vizcarra after the election. 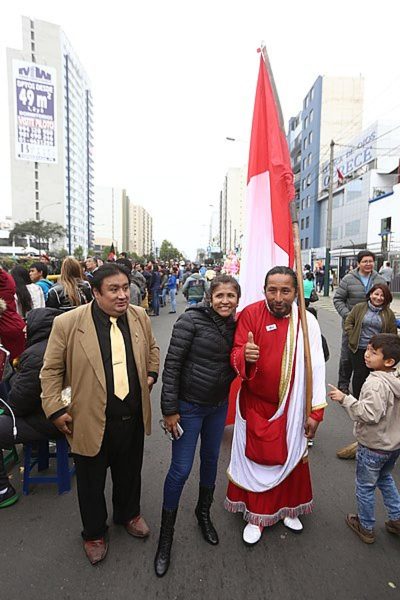 An Israelita named David Chauca Quispe poses with fans in 2018. Ministry of Defense of Peru/flickr, CC BY

Founded in 1968 by a Quechua-speaking laborer from the Andean region of Arequipa who called himself the “Christ of the West,” this nationalist religious movement blends Andean folklore and Hebrew Bible teachings. They simultaneously promote the communal agricultural practices of the Inca empire and venerate the Ten Commandments.

According to Israelite beliefs, the Promised Land is in the Peruvian Amazon, and their founder received direct revelations from God at Machu Picchu.

Peru’s roughly 150,000 Israelites maintain a rigorous lifestyle based on an interpretation of the Old Testament. Men wear long hair and beards; women use headscarves and robes. Lying and stealing are strictly prohibited.

Many live together in agricultural cooperatives, where they prepare for the immanent apocalypse that, they believe, will restore the communal agrarian society of the Inca empire. Their worship services, which are divided by gender, include ritual animal sacrifices.

While the group considers itself the culmination of biblical prophecies, many Peruvians see the Israelitas as pagan. General mistrust of the group doomed founder Ezequiel Ataucusi Gamonal’s two presidential campaigns in 1990 and again 2000.

Atacusi died in 2000. In the 2020 elections, his Frepap party received over 1 million votes from across Peru. Once discredited as a fundamentalist sect, the Israelites have entered the mainstream – in politics, if not in religion.

A New Force on the Religious Right

The foremost scholar of the Israelitas, Juan Ossio, does not see this as an aberration in Peruvian history. He has argued that the Israelitas are the latest in a centuries-old line of Andean politico-religious movements that arise in response to crisis – in this case, political corruption.

“We will bring transparency to the government,” said one Frepap member after the election, promising to shake up Peru’s scandal-ridden politics.

“Their ideas seem interesting to me and I think it is a good option for the great changes that we want,” wrote Tito Mauri, a musician from Lima, on Frepap’s Facebook page.

The new Congress takes office on March 15. How the Israelitas will actually translate their ideas into policy is unknown. But the group’s adherence to Old Testament law suggests its representatives will be socially ultra-conservative.

When asked about LGBTQ rights by the Peruvian newspaper La República, Congressman-elect Wilmer Cayllahua on January 27 said, “We are all Peruvians, but I don’t agree with their way of living.”

He added that queer and trans people “have evil in their blood.”

Historically, Frepap has not been active in Peru’s strong anti-LGBTQ movement, which is led by evangelicals and Catholics. But once in Congress, it may well align with other conservative parties on issues like gay marriage, abortion and sex education.

The next test of the Israelites’ momentum will be Peru’s 2021 elections.