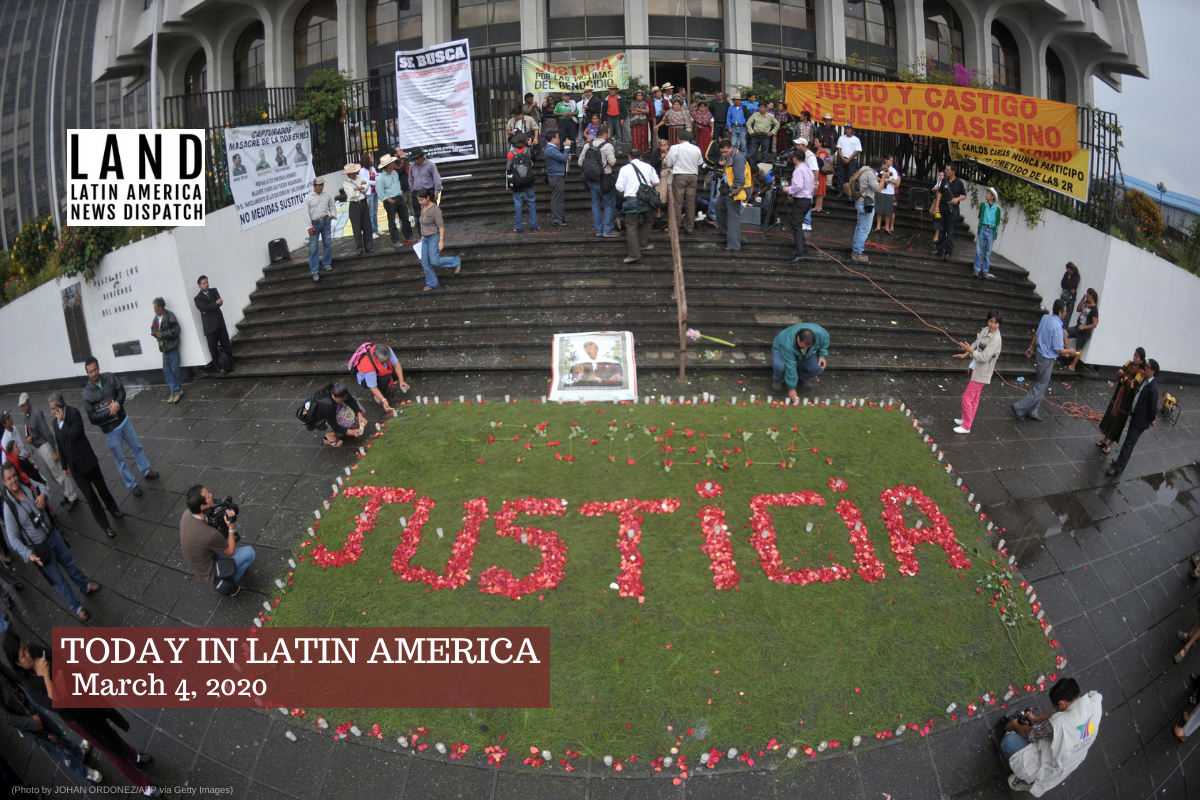 Relatives of the victims of the slaugther of the villa Dos Erres form the word “Justice” with flowers outside the Supreme Court on August 2, 2011 in Guatemala City before the trial of military men involved. (Photo by JOHAN ORDONEZ/AFP via Getty Images)

GUATEMALA: Gilberto Jordán, a former Guatemalan special forces soldier, was deported back to Guatemala on Tuesday after serving a ten-year prison sentence in the U.S. Jordán was charged with illegal procurement of U.S. citizenship, and lying about his military service and role in the Las Dos Erres massacre in 1982.

Jordán was part of a death squad known as “los kaibiles” that murdered more than 200 people in Las Dos Erres. Jordán admitted to his role in the massacre, including throwing a young child down a well. Las Dos Erres was one of many massacres in Guatemala’s decades-long civil war, that left 200,000 people dead and 45,000 missing, according to the United Nations.

Jordán was living in Florida when he was arrested in 2010. While serving his sentence, Jordán testified against his superior officer, Lt. Jorge Vinicio Sosa Orantes, identifying him as the senior official who gave the order to “kill all the people” at Las Dos Erres. Upon arrival in Guatemala yesterday, Jordán was detained on domestic charges related to the massacre.

BRAZIL: Brazil and the U.S. reached a deal to run joint military projects and share  funding. Companies from both countries will be able to run international projects under the research, development, test, and evaluation (RDT&E) agreement, which is open to both public and private funding and will make Brazil a potential military arms supplier to NATO allies. Initial negotiations began in 2017 under former president Michel Temer. Recent technology agreements between the two countries and  closer ties between Jair Bolsonaro and Donald Trump accelerated the agreement. The RDT&E agreement is expected to be signed next week, during President Bolsonaro’s trip to Miami.

CHILE: Nearly 300 people were arrested and public transportation was temporarily shut down during protests in Santiago on Monday evening. Bus lines stopped service and metro stations closed after protesters began burning barricades and threw rocks and bricks at security forces, according to interior minister Gonzalo Blumel. Protests also took place in Antofagasta, Temuco and Concepción. Since last October, tens of thousands of people have been arrested during widespread unrest. More than 180 minors have been held in preventative detention since the protests began.

VENEZUELA: The Spanish government agreed to an extradition request from the U.S. for Venezuela’s former intelligence chief General Hugo Carvajal. He faces charges of drug trafficking. Carvajal is accused of assisting Colombia’s FARC rebel group and protecting U.S.-bound drug shipments during his term. He has been under U.S. sanctions since 2008. The former official fled to Spain in April 2019 after denouncing president Nicolás Maduro. He has been in hiding since Nov. 2019 when a Spanish court ordered that he should be extradited to the U.S.

PUERTO RICO: Rafael Cancel-Miranda, one of the key figures of Puerto Rican independence and the Nationalist Party, died at the age of 89 at his residence in San Juan on Monday. He was the last surviving member of a group of Puerto Rican nationalists who staged an armed protest at the U.S. Capitol building against colonial rule in 1954. Cancel-Miranda was imprisoned for 25 years, first at Alcatraz and later at prisons in Kansas and Illinois. In 1979, U.S. President Jimmy Carter pardoned him. He was widely regarded as a writer, publishing nine books and dozens of political analysis articles. Puerto Rican flags will wave “as high as possible,” as Cancel-Miranda requested, in remembrance.​​​​​​​

NICARAGUA: Authorities announced the arrest of U.S. citizen Larry Robert McCartey. He is accused of shooting his girlfriend and one of her friends in the tourist destination of Granada. According to the official outlet El 19 Digital, McCartney left a bar with the two women. He later forced them out of the car, shot them and abandoned their bodies.

MEXICO: President Andrés Manuel López Obrador bought the first ticket in a symbolic presidential plane raffle yesterday. The government is selling six million $25 tickets to raise money for the poor and pay for the upkeep of the Boeing 787. One hundred raffle winners will receive a roughly $1 million prize. The previous president bought the plane for $200 million. López Obrador’s administration first tried to sell the plane for $130 million. Tickets will be made available to the public on March 9.