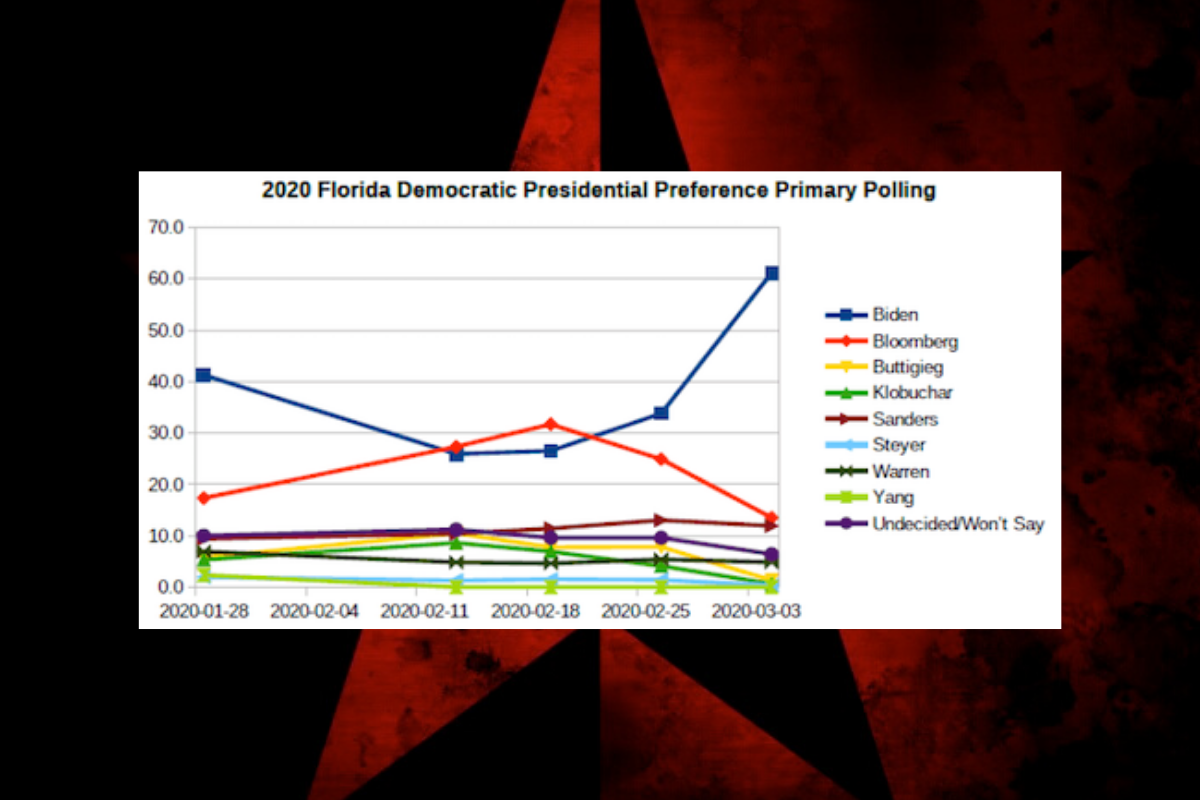 The polls said that 61% of likely Florida voters support Biden with Sanders at 12%. In addition, Florida Politics said, “Biden performed strongest among minority voters, winning over 68% of black voters, 69% of Asian voters and 60% of Hispanic voters compared to 58% of white voters.” (According to the release by StPetePolls.org, the poll surveyed 294 Latinos that mostly skew older.)

The release noted that “this poll of 1,882 likely Florida Democratic Presidential Primary voters was conducted on March 4th, 2020. This poll used the registered voter lists supplied by the state of Florida as of January 7th, 2020. The sample of voters that were contacted included random samples of registered voters within the boundaries of the state of Florida.” This week, Mike Bloomberg dropped out of the race, along with Elizabeth Warren.

Florida’s eligible Latino voter population is 20.5% of the overall eligible voter population (3,143,000 out of a total 15,342,000), according to Pew. Recently, Sanders has been criticized for his comments about Fidel Castro, the late Cuban leader who still riles up Cuban American voters, both on the the right and yes, even the moderate left.

In 2016, Sanders lost Florida to Hillary Clinton by more than 30 points and by more than 50 points in Southern Florida–the hub of the state’s Cuban vote and voters from other Latin American countries. Central Florida, where most of the state’s Puerto Rican community is based, was also a rout for Clinton.

When asked on February 29 how Sanders could even compete in Florida against Biden, Sanders senior advisor Chuck Rocha said his team has a plan.

On @InTheThickShow, @Maria_Hinojosa and I talked about @BernieSanders Sanders and Cuba comments. I shared what @ChuckRocha of Sanders campaign told me in Nevada about Sanders' chances in March 17 #FloridaPrimary. This is what Chuck told me.

“The population that you talk about who worries about the communist thing are older Cubans in Miami, so I’m not really going to spend a lot of time talking to Cubans over 50. “But guess what, their kids overwhelmingly voted for Barack Obama,” Rocha said. “That whole demographic in that state is changing, and I would tell white consultants and the establishment that there’s been a million Puerto Ricans who’ve moved to the I-4 corridor that you may want to pay attention to. Those people have registered to vote over 65 percent as ‘no party’ because the Democrats and the Republicans, in their minds, have walked away from that island and have done nothing to help. Bernie Sanders is very popular with Puerto Ricans. They’re very popular with Medicare For All, in talking about your government working for you. These folks have been treated like literally second-class citizens because they are citizens of this great country, and that right there I think will be a big, winning formula for us in Florida.”

From the looks of this March 4 poll, it will be an uphill battle for Sanders to win Latinos over in Florida, likely making the Sunshine State the first state the Sanders campaign will not do that well at all with Latinos.

This is the media release about the poll.

Poll of Florida’s Democ… by Peter Schorsch on Scribd