Where Does the Latino Vote Go Next in Upcoming Democratic Primaries? 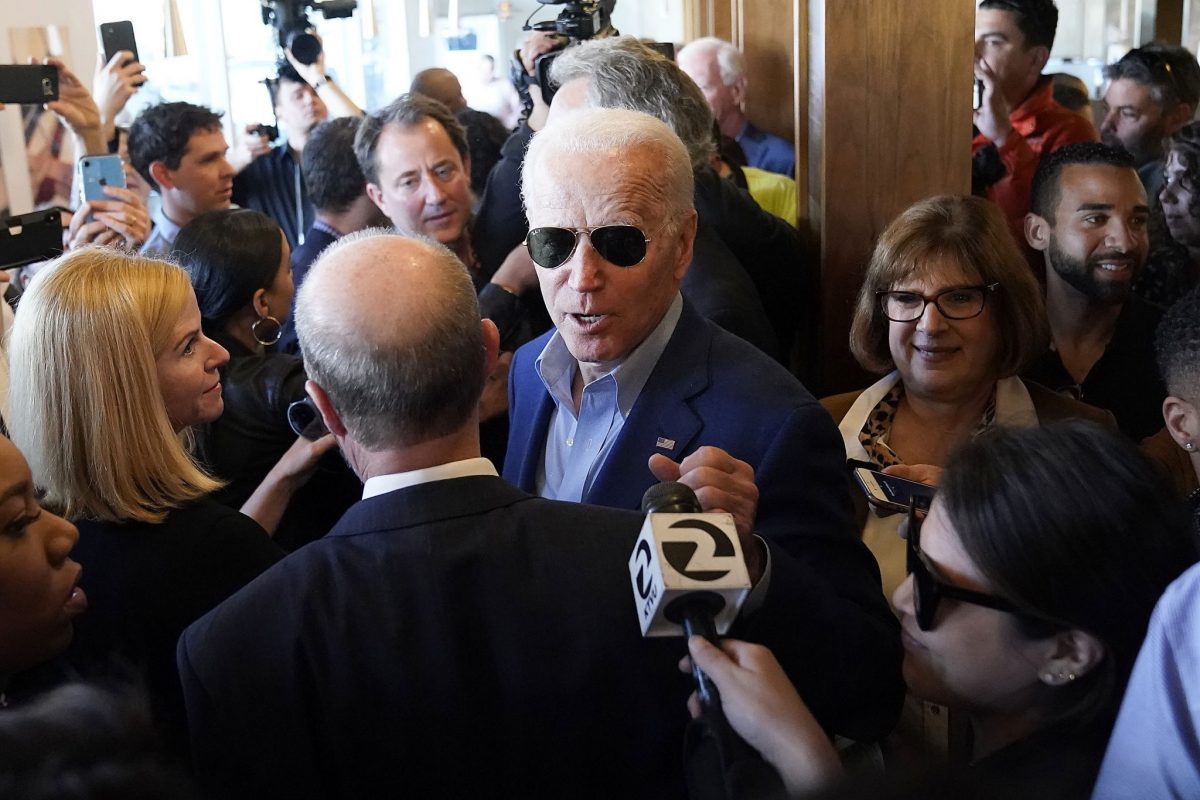 So Super Tuesday happened and as of this posting, the delegate count has Joe Biden with 637 delegates and Bernie Sanders with 559 (via the AP, and yes, this can change, so keep checking here).

It is safe to say that if Sanders did not do so well with Latino voters in the West (California, Colorado and Utah) and Texas, he would have had a much bigger delegate deficit. As NBC Latino noted, “Latino voters boosted Sen. Bernie Sanders on Super Tuesday, coming through for him after a big investment in the community by his presidential campaign.”

Let’s break down Super Tuesday as much as we can and then share where this all goes next. (FYI, for our previous pre-Super Tuesday vote, go here).

California exit polls show that @BernieSanders got 55% of Latino voters and @JoeBiden got 21% of Latinos. #SuperTuesday

And here is Sanders and Imperial. pic.twitter.com/vxHSdTKXtY

More Analysis from @UCLAlatino on #LatinoVote in Texas: Analyzing all precincts across Harris County, Texas (Houston) we find Latino vote was 47% Sanders vs. 15% for Biden #SuperMartes pic.twitter.com/Wghp6qt9Gp

This is Colorado, the #SuperTuesday state with the third largest share of Latinos.

Also those areas are north of Navajo Nation. pic.twitter.com/ZsvjmG5Q7n

Sanders looks like he got a big win in Colorado:

-1/5 voters were Latino
-Sanders won non-white voters overwhelmingly, according to the exit polls.

The eyes of Texas are upon #SuperTuesday

Part of Salt Lake is in a district where 10.6% of the eligible voter population is Latino (Pew).

That went to Sanders. pic.twitter.com/zNLcb6RVo7

Two other places where Sanders did not do well where there were Latino eligible voter shares—8.5% (OK 5) 6.8% (OK 4) #Oklahomahttps://t.co/8u3vAlEQAW

Note: The state abbreviation for Arkansas is AR and not AK.

This is Arkansas. The ONLY county Sanders won was in #Fayetteville, which is part of a congressional district (AK 3) that has an 8% eligible Latino voter population (according to PEW).

One place with 3% Latino eligible voter districts where Sanders did not do well was in western Tennessee.https://t.co/ZBdDTHGGdp

Also #Minnesota. The two congressional districts with eligible Latino voters in 4% range (around Minneapolis/St. Paul) were in the area that Biden won.

Not Applicable (all Latino % at 2 or lower)

Hope some of that data gives you a flavor of it all. Sanders did extremely well in border communities in TX & CA, plus overall w/Latinos there. He also did very well in immigrant urban areas in MA. He did well in MA places where there were a lot of Puerto Ricans. Also, CO & UT.

All data sourced to Pew.

These March 10 states do not have states with big Latino eligible voter populations (except for parts of Washington and maybe Idaho), but it does have a mix of states across the country, except for the East Coast.

Washington: Did you know that 7.7% of Washington’s eligible voter population is Latino (411,000 out of a total 5,359,000)? Granted, the coronavirus scare might have an impact on the state’s turnout (the state doesn’t think so), but it is interesting to note that this state is seeing a growing Latino population. Let’s check the congressional district breakdown:

Here are the two districts:

Michigan: According to Pew, “3.5% of the eligible voter population is Latino (261,000 out of a total 7,549,000). However, that share varies depending on the state’s congressional districts. 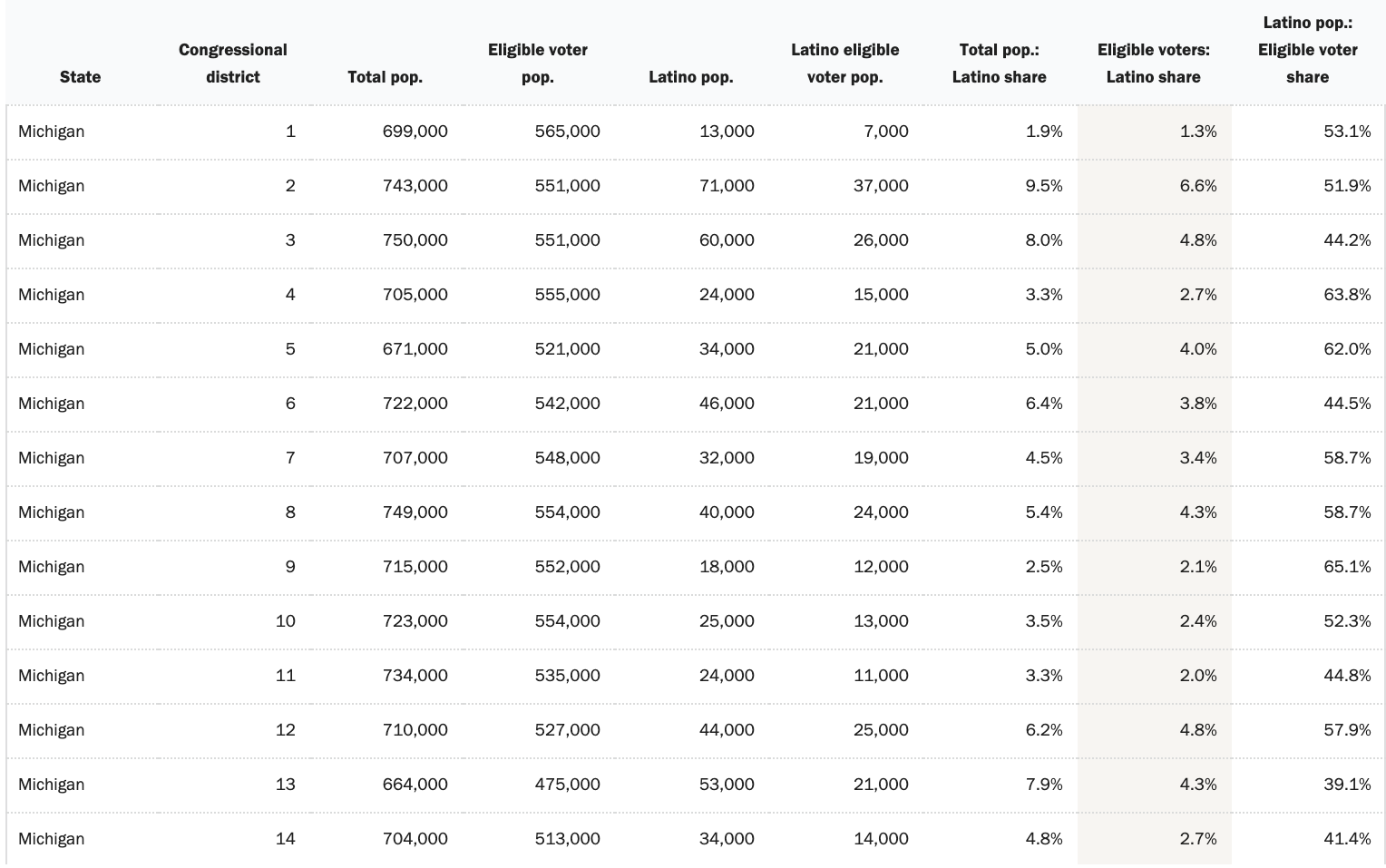 For example, Michigan’s 2nd congressional district (on the state’s western side) has 37,000 eligible Latino voters. This district currently has a Republican representative.

The next top district is Michigan’s 13th district, which is metro Detroit. That has about 21,000 eligible Latino voters, and on a recent reporting trip to the city’s predominantly Latino Southwest neighborhood, voters shared their thoughts:

These voters, all these Latinos (even older ones), about 10-15 of them, shared a general view that #SuperTuesday had them thinking of what their vote will be, but that they will at least vote on Tuesday but they are not sure if they will vote in November.

These are the congressional district breakdowns:

The top congressional district is the fifth, with 34,000 eligible Latino voters. This district is part of metro Kansas City. Its representative is Democrat Emanuel Cleaver, who is African American.

Mississippi: According to Pew, “1.6% of the eligible voter population is Latino (36,000 out of a total 2,240,000)”, but as the congressional districts show, that average varies, with the state’s 4th district (on the Gulf of Mexico) showing a 2.7% eligible Latino voter share.

2 responses to “Where Does the Latino Vote Go Next in Upcoming Democratic Primaries?”