Salvadorans Who Fled to US to Escape Violence Returned to It 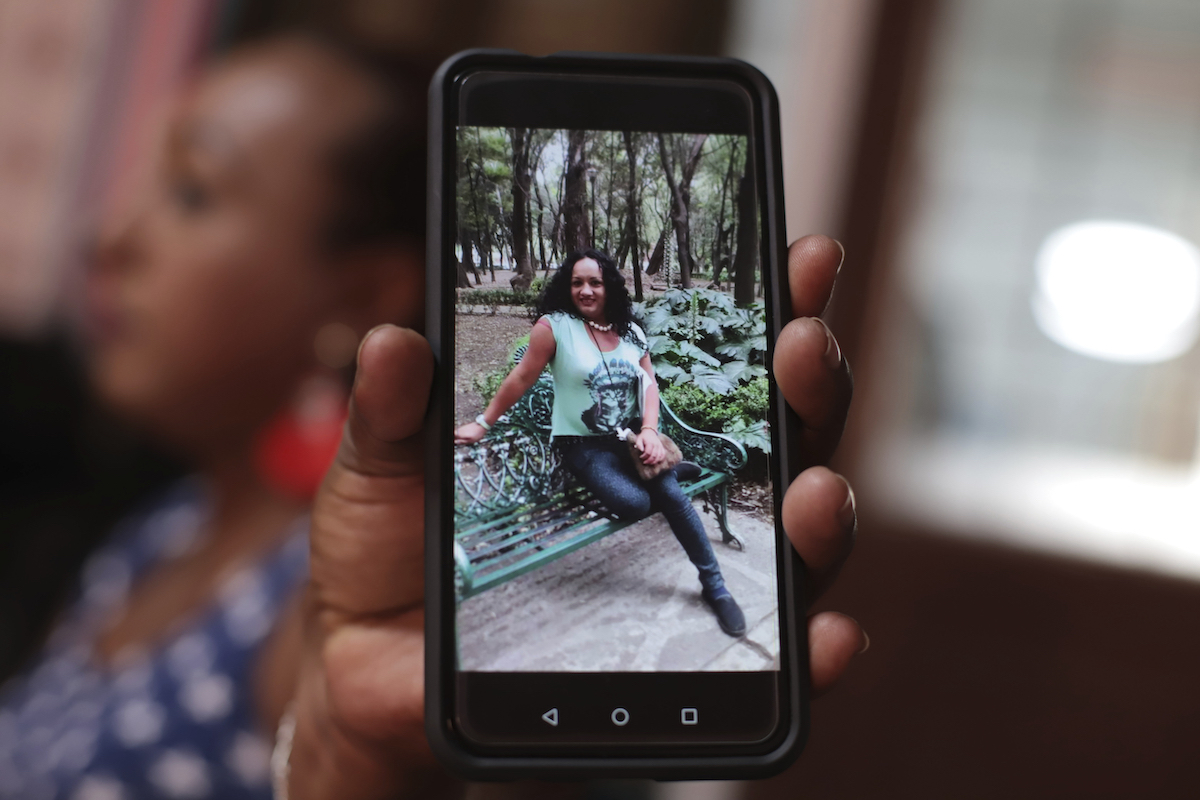 In this February 12, 2020 photo, transgender woman Leticia shows a photograph of Camila Díaz, another transgender woman she met while migrating to the U.S. where they both turned themselves in to U.S. immigration authorities and were eventually deported, during an interview at the office of rights group “Arcoiris Trans,” or Rainbow Trans, in San Salvador. Camila Díaz disappeared the night of January 30, 2019 as she worked the streets of San Salvador and was found the next day, badly beaten but still alive. (AP Photo/Salvador Meléndez)

SAN SALVADOR, El Salvador (AP) — Several years ago, Camila Díaz left her native El Salvador and went to the United States, looking for a place where she would be safer as a transgender woman.

But she failed to find a sympathetic ear. Deported back to San Salvador, the nation’s capital, she was killed just over a year later.

Díaz, 30, was one of 138 Salvadorans deported from the United States who have been killed upon returning to their country since 2013, according to a report by Human Rights Watch.

As the administration of U.S. President Donald Trump steps up efforts to block asylum, the report reflects a bleak picture created in part by gang violence in El Salvador and struggling law enforcement agencies there, some experts say.

“El Salvador is a small country, a poor country, a very violent country and so the police are stretched,” said Meg Galas, Country Director of Northern Central America for the International Rescue Committee, a humanitarian aid organization.

“When people are deported they are deported right back into the violence and the fear that they left,” she said.

International law does not allow countries to send refugees back to a place where they fear persecution. Some activists claim that, under Trump, the U.S. is not following its own procedures of giving asylum seekers a chance to explain their complicated situations and is, instead, blocking their right to be heard.

The U.S. Immigration and Customs Enforcement agency, or ICE, said Friday that migrants placed in removal proceedings receive all appropriate legal process before the federal immigration courts. The agency only deports people in accordance with federal laws as passed by Congress, said an agency spokesperson who declined to be named in line with agency protocols. 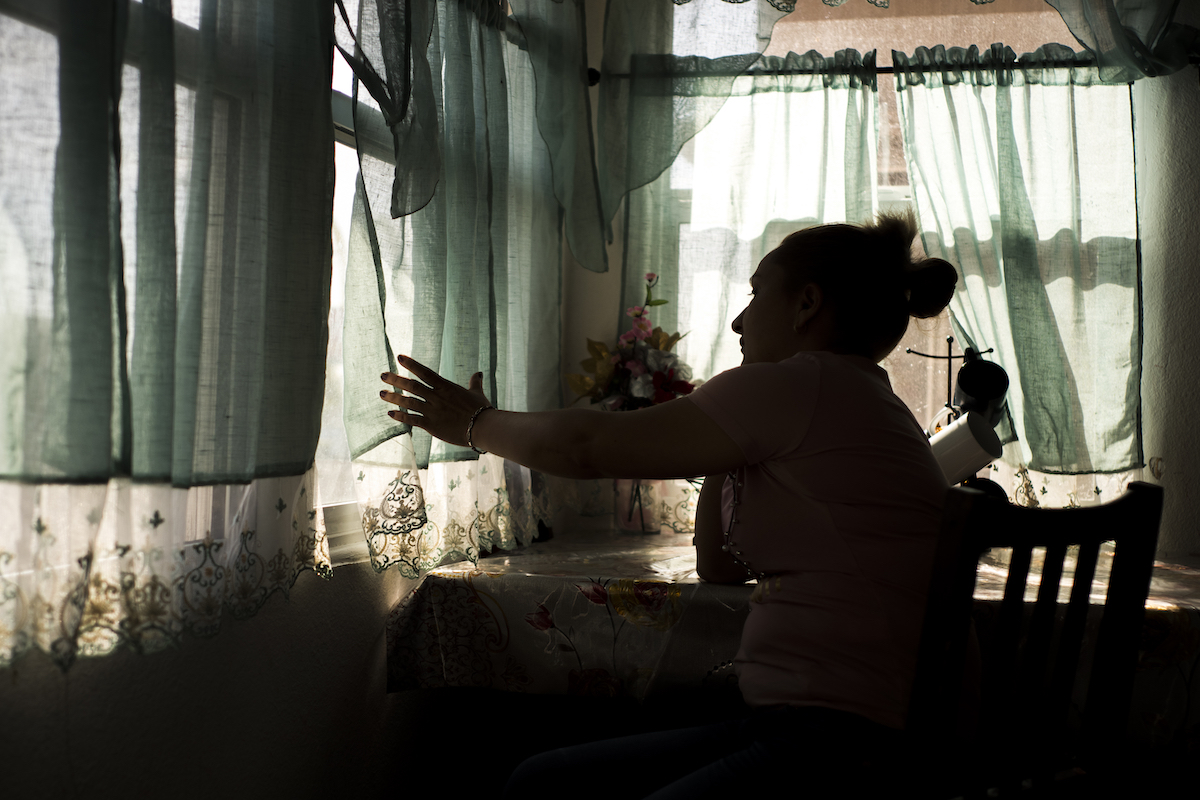 In this February 13, 2020 photo, an unidentified immigrant woman who fled El Salvador and asked for asylum in the U.S. in 2015 looks out the window at her apartment in Los Angeles. The woman, who asked her name not be published for fear of reprisals, has a cousin, Marcos González, who was murdered with machetes in 2013 in El Salvador after he was deported in 2011 from the U.S. The cousin broke down crying. “He was like a brother to me,” she said. (AP Photo/Damian Dovarganes)

Asylum has always been a long shot for migrants, with many claims denied. It has become even harder in the Trump administration, which has focused on making asylum increasingly difficult to obtain. The Justice Department has said that the goal is to prevent immigrants from overwhelming the nation’s immigration system and endangering national security.

Díaz left El Salvador in 2014 after suffering a beating that left her with a dislocated jaw; she had filed a criminal complaint against her attacker, with no result.

After a while in Mexico, Díaz returned to El Salvador, where she found work in a bar in a tough neighborhood in San Salvador. But gang death threats followed her, and in 2016 she once again left the country.

This time, at a migrant shelter in the southern Mexico city of Tapachula, she met Leticia, a fellow Salvadoran transgender woman.

Leticia, who asked that her real name not be used for fear of persecution, told her story to The Associated Press.

Leticia and Díaz lived in Mexico for a year and a half. They got asylum papers in Tapachula, but they felt harassed in southern Mexico, so they decided to travel to Mexico City, in the center of the country.

“Because we were trans, and the way we dressed, they wouldn’t give us jobs. We were discriminated against all the time,” Leticia recalled. “We resorted to prostitution in order to survive.”

Desperate, they traveled to the U.S. border, where they turned themselves in to U.S. immigration authorities.

Díaz was held for a couple of months at an immigration detention center in San Diego, California before she was deported. 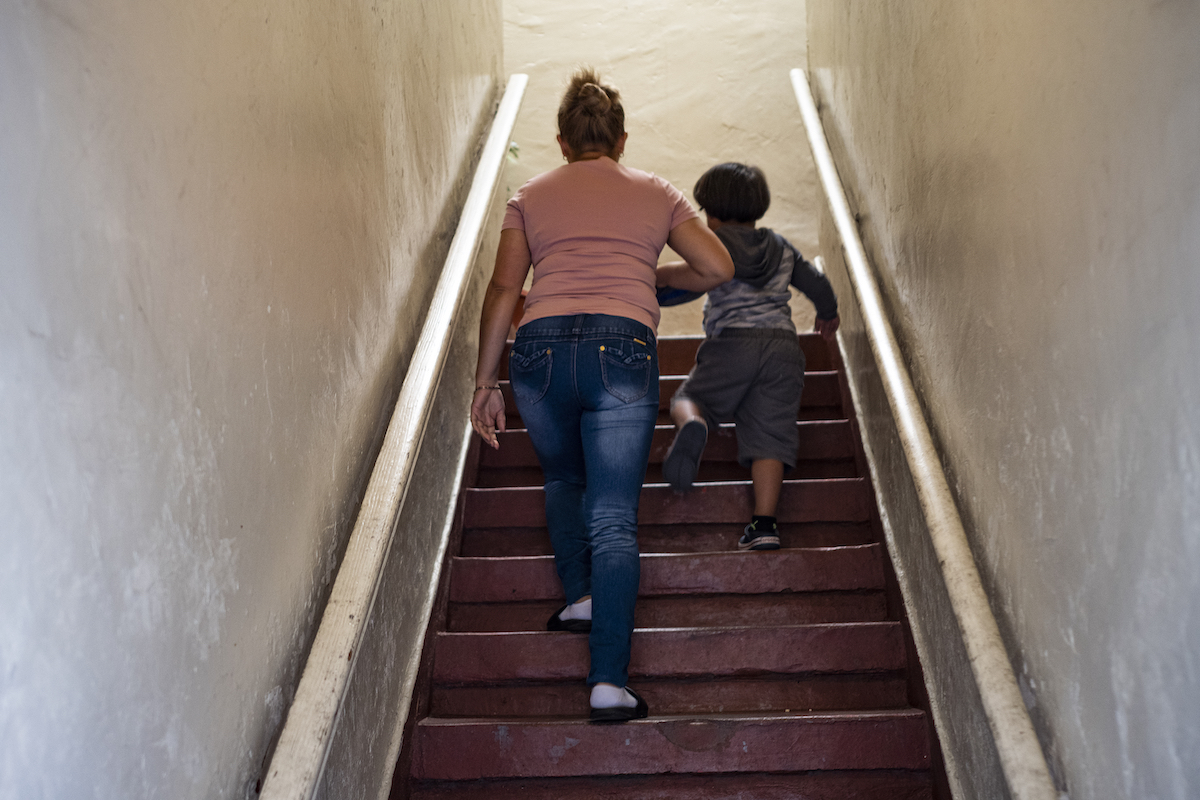 In this February 13, 2020 photo, an unidentified immigrant woman who fled El Salvador in 2015 and is waiting on a decision regarding her asylum request, walks upstairs with her son to their apartment in Los Angeles. “There are a lot of adolescent kids who would still be alive today if they hadn’t been deported,” said the woman, whose cousin Marcos González was killed in their native country after he was deported from the U.S. (AP Photo/Damian Dovarganes)

Leticia was held there, too, for nine months, as she appealed, until she, too, was deported in May 2018.

“Camila never put up with harassment. Even though she told them over and over again that our lives were in danger, they deported her first,” Leticia said. “I kept fighting, but in the end they deported me. Now she is dead.”

Díaz disappeared the night of January 30, 2019 as she worked the streets of San Salvador and she was found the next day, badly beaten but still alive.

Emergency personnel took her to the Rosales hospital, where she died on February 3.

Mónica Linares, an activist with the rights group Arcoiris Trans (Rainbow Trans) said the group had demanded authorities investigate her killing. What followed was the arrest of three policemen who, according to investigations, had stopped Díaz in the street, and later threw her from a moving police vehicle on a highway on the east side of San Salvador.

The policemen are waiting for a judge’s decision on whether to prosecute them.

El Salvador’s murder rate has declined sharply since 2015, when more than 6,000 people were killed. But the country continues to have one of the world’s highest homicide rates, in large part due to gang violence.

Meanwhile, the number of Salvadorans seeking asylum in the United States grew tenfold between 2012 and 2017. Many cited gang threats in their asylum claims, but only about 18% saw their asylum requests approved.

Human Rights Watch said the real number of people killed after being deported may be much higher than 138.

Salvadoran Foreign Minister Alexandra Hill Tinoco told reporters that some of the returning Salvadorans who had been killed were gang members themselves. But she also acknowledged that deportees face a social stigma in their home country.

The deaths reported in the Human Rights Watch report occurred during both the administrations of Trump and Barack Obama.

Trump has made limiting immigration a centerpiece of his policies, including making Central American asylum seekers wait in Mexico while their cases are being considered.

Human Rights Watch has called on the U.S. government to drop the “remain in Mexico” policy, and drop restrictions that make it harder to seek asylum because of gang threats or gender violence. The Department of Homeland Security, however, says it is trying to make the asylum process more efficient and eliminate fraudulent claims.

Despite the hardening of U.S. policies, Leticia, Díaz’s friend, plans to try to return to the United States this month.

“I want to undertake the journey again, to see what fate holds for me,” she said.