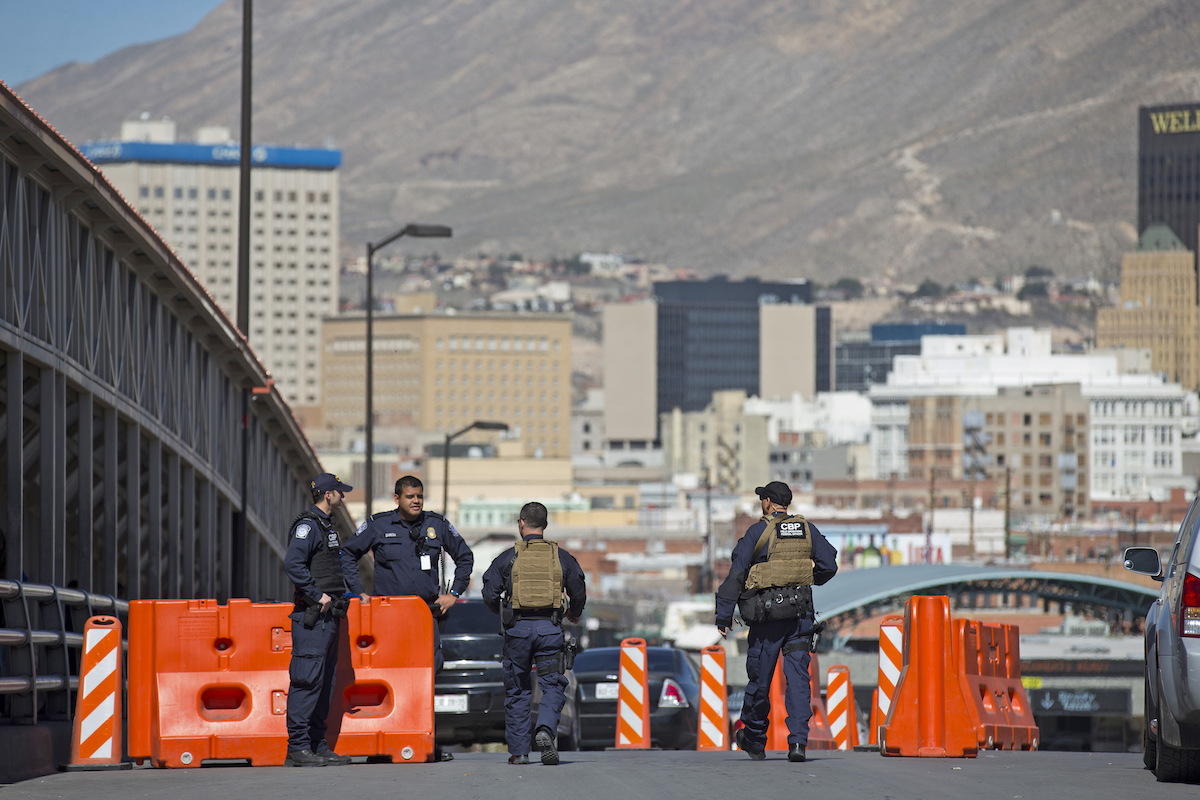 In this Tuesday, Feb. 16, 2016 file photo, U.S. Customs and Border Protection officers of the Special Response Team unit, patrol on the Paso del Norte Port of Entry in El Paso, Texas. The U.S. government said Friday, March 6, 2020 that it’s sending 160 military police and engineers to two official border crossings to deal with asylum seekers in case a federal appeals court strikes down one of the Trump administration’s key policies. The deployment is in response to crowds that gathered at an El Paso crossing on Friday after a federal appeals court temporarily struck down the program known as “Remain in Mexico,” which forces asylum seekers to stay in Mexico while their cases wind through court in the U.S. (AP Photo/Ivan Pierre Aguirre, File)

PHOENIX (AP) — The U.S. government says it is sending 160 military police and engineers to two official border crossings to deal with asylum seekers in case a federal appeals court strikes down one of the Trump administration’s key policies.

Senior Customs and Border Protection officials said Friday that active duty personnel will be in place by Saturday at ports of entry in El Paso and San Diego, where a large caravan attempted to cross the border in 2018, resulting in chaos and the closure of the San Ysidro port, the nation’s busiest land crossing. Officials say 80 service members will be sent to that port and another 80 to the El Paso one.

The deployment is in response to a crowd of asylum-seekers that gathered at an El Paso crossing last Friday after the 9th U.S. Circuit Court of Appeals temporarily struck down the program known as “Remain in Mexico,” which forces asylum seekers to stay in Mexico while their cases wind through court in the U.S. Officials shut down that border crossing for several hours that evening before the court reversed itself.

On Wednesday, the court again made a decision on the case, this time blocking the program in Arizona and California, the two border states under its authority. About 60,000 asylum-seekers have been returned to Mexico while awaiting their immigration hearings in the U.S. It’s unclear why the government is sending military police to El Paso, which isn’t subject to the current injunction blocking the program. When asked about that, a senior official said military members can be moved to different ports of entry in response to shifting needs.

Critics call the program inhumane and dangerous, forcing vulnerable people to wait in high-crime Mexican border cities where they are often subjected to violence, extortion and kidnapping.

But “Remain in Mexico,” which the government calls the Migrant Protection Protocols, has been one of the most successful tools in the administration’s battle to stem the large number of asylum seekers looking for refuge in the U.S. 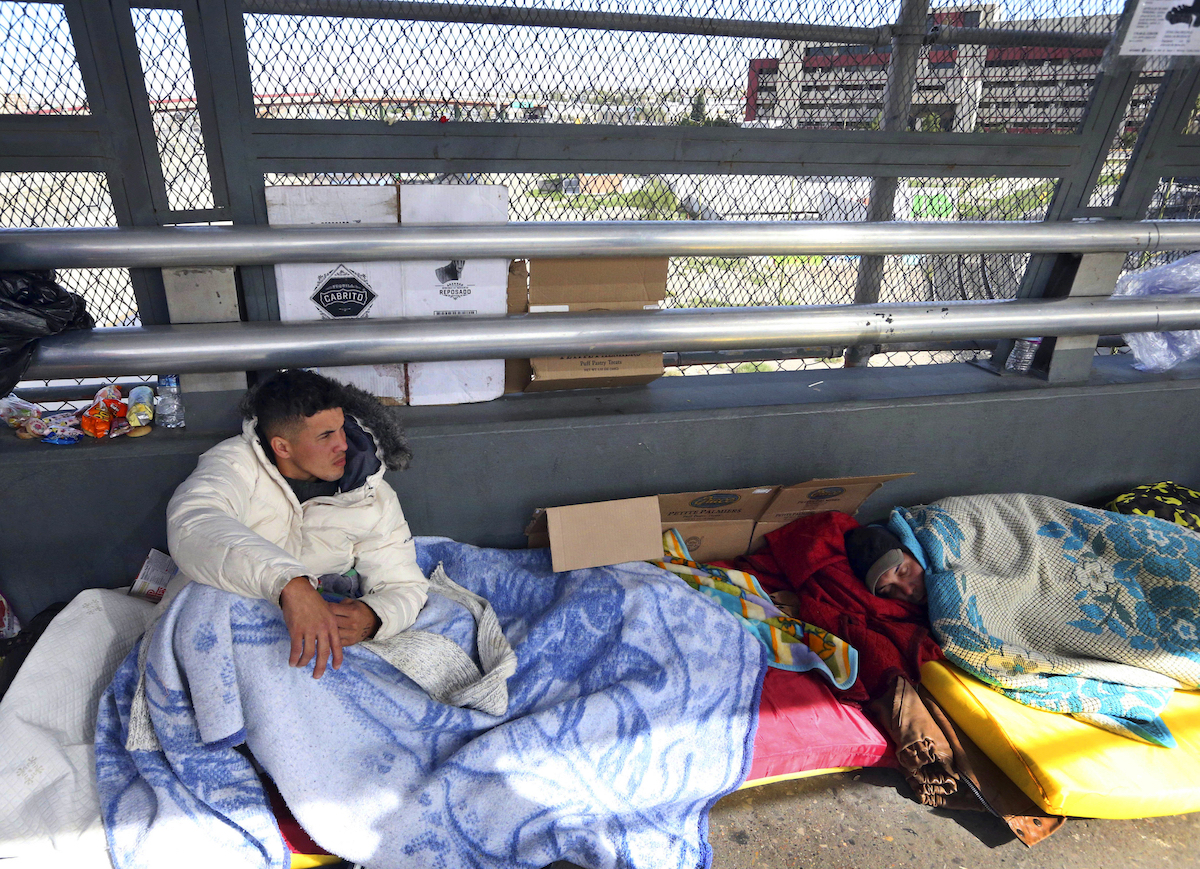 In this Thursday, Nov. 1, 2018 file photo, a migrant from Cuba rests and waits to enter the U.S. on the Mexican side of the Paso Del Norte International Bridge between El Paso, Texas, and Juárez, Chihuahua, Mexico. (Rudy Gutierrez/The El Paso Times via AP, File)

The Trump administration is asking the U.S. Supreme Court, which has consistently ruled in the administration’s favor on immigration policies, to intervene and wants the policy to stay in effect until next week to give the high court time to decide.

In the meantime, authorities say they’re preparing for more large groups of asylum seekers in case the appeals court strikes down the policy. Seeking asylum at ports of entry is legal, but the government has gone to great lengths to prevent migrants from doing so, including a “metering” policy that requires asylum-seekers to wait on an unofficial list for months before they are even allowed to walk up to a U.S. agent and seek protection.

CBP officials who provided the information on Friday gave few details about what exactly the military police will be doing, but did say military police won’t be conducting immigration enforcement.

In a statement, the Department of Defense said military members will place temporary barriers to restrict access through ports of entry and provide protection for CBP personnel. The service members will come from the 687th Engineer Construction Company and the 519th Military Police Battalion at Fort Polk, Louisiana.

CBP says the deployment is scheduled to last two weeks but could be extended if necessary. The deployed soldiers will come from Ft. Polk, Louisiana.

There are approximately 5,000 troops already at the border, about half of them members of the National Guard. The defense department has also reallocated nearly $10 billion to construction of the border wall, although there are pending legal challenges.

Since Remain in Mexico began a year ago, officials have increasingly hardened the El Paso Paso Del Norte bridge. Rolls of razor wire and forklifts with concrete barriers have been a regular fixture on the bridge for months, drawing the ire of local business leaders who say it turns off Mexican shoppers and visitors who keep the El Paso economy afloat.