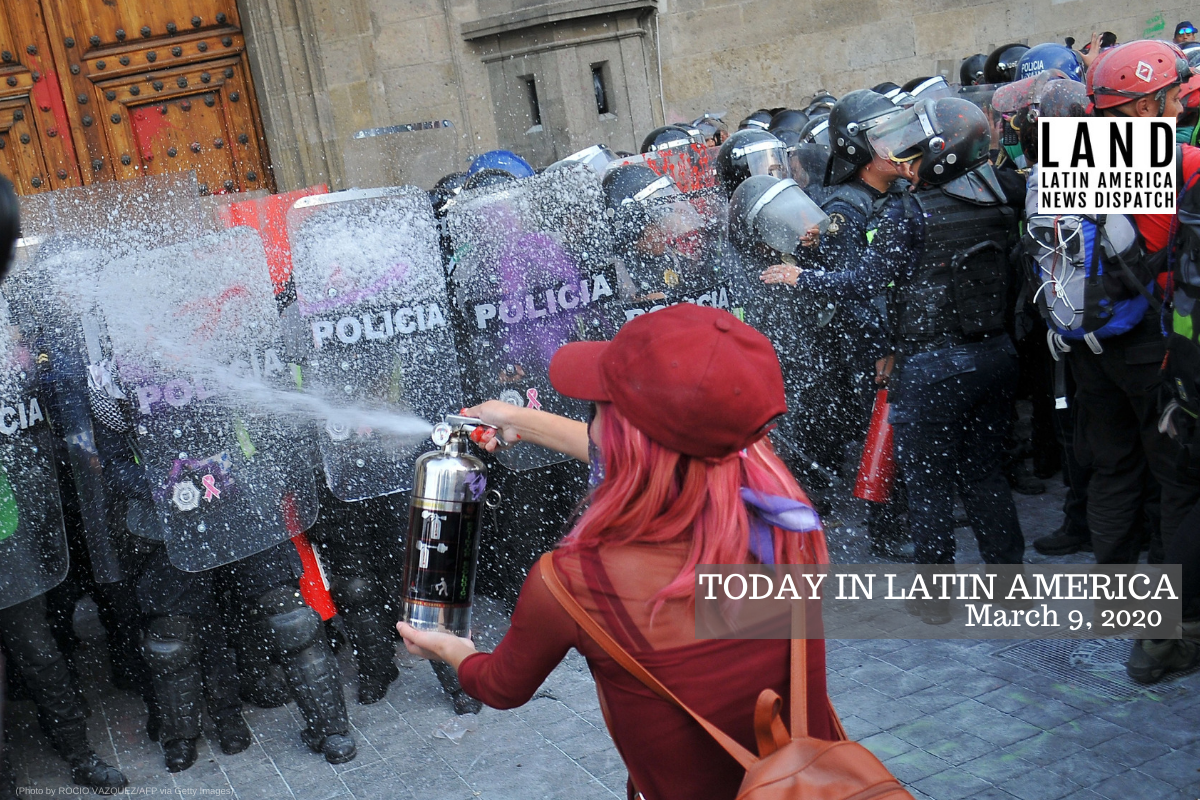 A woman faces the police while taking part in a protest during the International Women’s Day, in Mexico City, on March 8, 2020. (Photo by ROCIO VAZQUEZ/AFP via Getty Images)

More than a million women marched in Chile, with the largest protests taking place around the Plaza de la Dignidad in Santiago. The demonstrations were the country’s largest since December. Protests are expected to continue through the April 26 referendum on revising the Pinochet-era constitution. Sunday’s march included performances of the protest song “El Violador en Tu Camino,” and women are expected to continue demonstrating today in the second-half of the women’s strike.

In Mexico City’s central plaza, El Zócalo, marchers painted the names of women and girls who have been murdered since 2016. Today, activists plan to go on strike, avoiding work, school, and consumption to show what it means for friends, family, communities, and society when women disappear due to violence. Some employers have supported the demonstration by providing time off. Last year, 3,825 women were killed in Mexico, more than the year before. Feminists are leading a growing movement to reckon with gender-based violence and impunity for perpetrators.

In Nicaragua, activists decided not to lead any public protests and to commemorate the day in private instead. But police surrounded one feminist organization where 200 women were gathered and closed access roads to the building, La Prensa reported. One leader said the police prevented the women from leaving for a couple of hours.

BRAZIL: President Jair Bolsonaro visited U.S. President Donald Trump at his Mar-a-Lago estate in Florida on Saturday. Trump spoke positively about his relationship with Bolsonaro, saying, “Brazil loves him. The U.S.A. loves him.” However, he dodged reporters’ questions about whether he would still seek to impose steel and iron tariffs, which he threatened to levy against Brazil and Argentina in December.

GUYANA: The results of last week’s presidential vote are delayed after a court upheld an injunction preventing the country’s election commission from announcing a winner. International observers raised concerns about the fairness of the election after the opposition party accused the commission of cheating to help President David Granger beat Ifran Ali. An 18-year-old protester was killed in the demonstrations against the alleged fraud. Granger and Ali belong to the Partnership for National Unity and Alliance for Change and the People’s Progressive Party respectively; support for these organizations is divided along ethnic lines. The stakes for this year’s election are high, with the country of fewer than 800,000 people preparing to receive hundreds of millions in oil revenue as ExxonMobil begins to produce there.

HAITI: Newly appointed Prime Minister Joseph Jouthe is struggling to gain unified support in Parliament. President Jovenel Moïse appointed Jouthe along with a new cabinet last week, but lawmakers have not ratified the assignments. Opposition leaders rejected the prime minister’s appeal for support. Moïse has been ruling by executive order for most of 2020 amid political and economic strife. In March 2019, the International Monetary Fund promised to lend Haiti $229 million in zero-interest loans, but the IMF is waiting to move forward.

COSTA RICA: The Tico Times reports four new cases of coronavirus were confirmed in Costa Rica this Saturday. Health authorities announced the first case this past Friday when a tourist from the United States tested positive for the virus. The 49-year old tourist and her husband have since been under supervision and isolated at their hotel. Since Friday, three Costa Rican citizens have tested positive for the virus. All patients are being treated and in stable conditions, according to the Health Ministry.

UNITED STATES: The Justice Department is directing immigration authorities to collect DNA from thousands of immigrants in detention, beginning in April. The DNA will be uploaded to an FBI database that federal, state and local investigators can access. For the last decade, citing resource limitations, the government has exempted the Department of Homeland Security from the 2005 DNA Fingerprint Law, allowing it to skip collecting the biometric data of migrants not facing criminal charges. The Trump Administration argues that since technology has made DNA collection cheaper, the law should extend more broadly. But critics of the change are calling it a frightening step toward surveillance.

UNITED STATES: Lucio Delgado, a blind man from Mexico, was unable to gain citizenship after failing the reading portion of the exam, which was not offered in Braille. The case shed light on U.S. Citizenship and Immigration Service’s lag in accommodating people with disabilities. The day of Delgado’s test, an official told him the agency had received his request for a Braille exam, but did not have one available. Without insurance, Delgado could not follow the agent’s advice to see an opthamologist in addition to the optometrist who had already given him documentation. A 2018 review from the agency found “gaps and barriers” in accessibility, “many of them systemic or procedural in nature.” In a statement last week, the agency reaffirmed its commitment to accessibility.