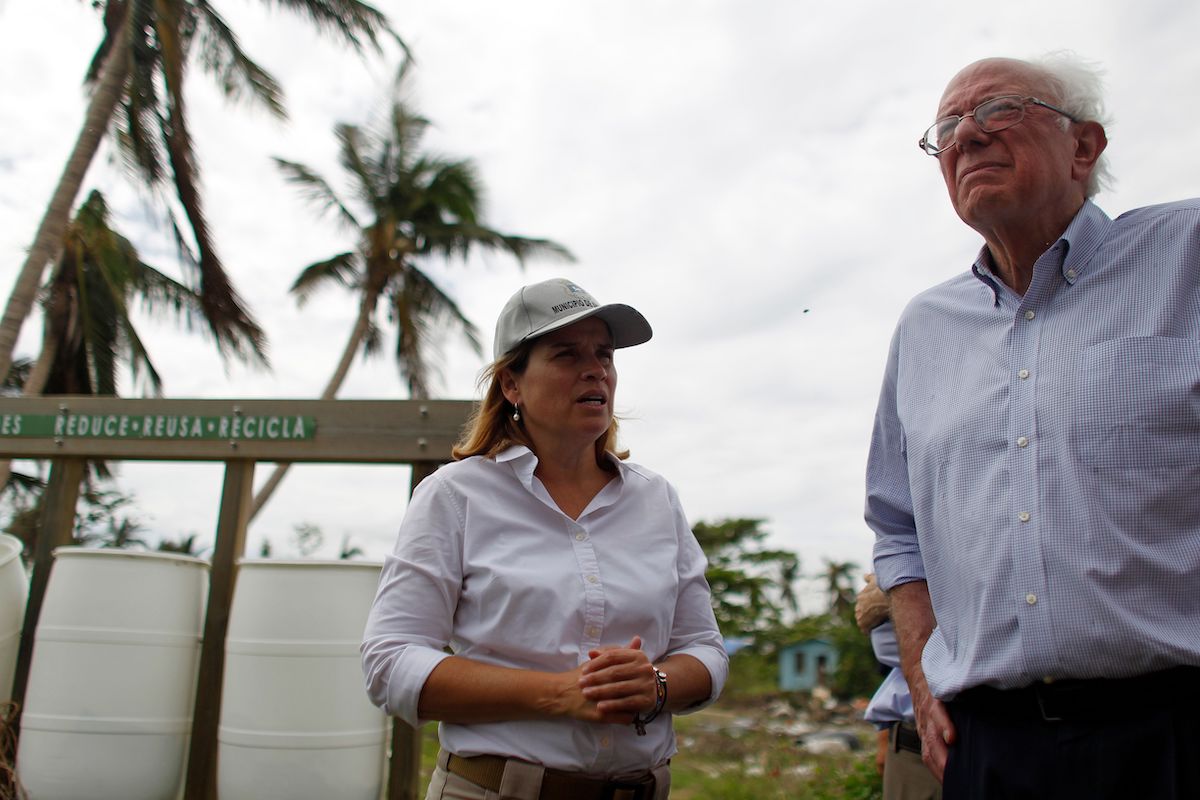 The mayor of San Juan, Carmen Yulín Cruz talks to US Sen. Bernie Sanders during a visit to the Playita community in San Juan, Puerto Rico, October 27, 2017. (Photo by RICARDO ARDUENGO/AFP via Getty Images)

UPDATE, MARCH 18: Due to the COVID-19 crisis, the March 29 primary in Puerto Rico is being rescheduled.

SAN JUAN, Puerto Rico — For a while, it seemed like the Puerto Rico delegates being decided in the March 29 Democratic primary were going to be split between Bernie Sanders, Joe Biden and Mike Bloomberg. As discussed earlier in Latino Rebels, Bloomberg’s pro-statehood stance had captivated the attention of enough primary voters to make the billionaire a force to be reckoned with on the island.

However, Bloomberg is now out of the race, declaring his support for Biden. So where are those Puerto Rican Democratic votes going now? The obvious answer would be Biden, but some voters we spoke to this weekend would disagree.

These are all comments made by former (and politically influential) Bloomberg supporters who wanted to remain anonymous:

“I was pretty disgusted by how the populares [the island’s pro-commonwealth party] persuaded Biden to not support statehood fully. I will sit out this primary even if it means not voting in this presidential cycle.”

“After Kamala [Harris] dropped out and when Bloomberg did the same, I received calls from a couple of Biden people recruiting me to the cause, but I haven’t made my mind yet. I know a couple of more progressive leaning folks who supported Bloomberg because of the statehood thing and now will support Bernie. I haven’t decided yet.”

“The Biden people have been recruiting people to their side hard. I have to admit that the bipartisan surrogate group they unveiled was impressive, but I was turned off by some of the people in that group. [Senate majority leader] Carmelo [Ríos Santiago] has voted in favor of some pretty Republican measures, and AGP [Alejandro García Padilla] was one of the worst governors ever.”

Having said that, it looks like Biden will still benefit the most from Bloomberg’s withdrawal.

Conversations with various Bloomberg supporters can be summarized by the following tweet:

“I hope that all of you who support statehood for Puerto Rico and that the winner of this upcoming Democratic primary is between Bernie and Biden should remember that [San Juan mayor] Carmen Yulín [Cruz], an enemy of statehood, is Bernie’s 2020 campaign co-chair.”

There is no doubt that Bernie supporters are the most passionate base out there, and Puerto Rico is no exception. Everyone we spoke to, whether they supported Bernie or not, felt the same way. Maybe Tuesday’s campaign office opening in Condado will be a good opportunity to gauge the level of excitement for Sanders in Puerto Rico?

But campaigns are not won on passion alone, and the Sanders campaign seems to have recently ruffled some feathers.

Some Bernie supporters we spoke to were not happy at all with the recent comments made by Mayor  Yulín Cruz that sarcastically asked who the “so-called Democrats who support statehood” would support after Bloomberg’s withdrawal from the race.

“Those are the kinds of comments that make me roll my eyes and question why the Bernie campaign picked Yulín in the first place. She is known for improvising and sometimes alienating people. We don’t need that right now,” a Bernie volunteer based in Puerto Rico told us.

“If there was a possibility that a pro-statehooder would have joined your candidate’s campaign, congratulations! That turnout will now be 0%, and you sent them directly to Biden. You are the island’s best Biden ambassador,” @gabby_f_m tweeted to Yulín Cruz’s Twitter profile.

Some influential Sanders supporters in Puerto Rico tend to agree.

“We could have gained the support of some pro-statehooders after the withdrawal by Warren and Bloomberg, but I feel that ship has mostly sailed now,” another Bernie supporter based in Puerto Rico told us. “Some people I’ve spoken to will prefer to stay at home instead of supporting Bernie after what she said.”

A couple of Warren and Bloomberg supporters echoed that sentiment.

“I believe Bernie has been openly anti-colony while we don’t even know how Biden feels about that; however, I don’t feel like rewarding a campaign that openly mocks statehood supporters. I much rather stay home”, said a former Bloomberg supporter.

“People think a switch from Warren to Bernie is the most natural thing to do. It’s not that simple in Puerto Rico at least,” said a Warren supporter still undecided on whom to vote for.

Bernie’s stance on status seems to have affected him a bit as well.

“Here is another reason why I could not support Bernie Sanders, something that I have pointed out before. He has opened the doors for another formula under the ELA [Commonwealth], in essence preventing Puerto Rico’s decolonization. I am not the only one saying it. Former PPD representative Jorge Colberg Toro says it too,” pro-statehood Democrat @joshuabonetpr tweeted.

And Then There Are These Tweets

As this tweet explains, in response to Ríos Biden press conference, which shows the Biden Puerto Rico team and how it is a combination of statehooders and those who support the status quo.

“Wow, Carmelo. This is bizarre and inexplicable. A true 100% statehooder would not endorse two of the two people there. Those two represent the same thing we completely repudiate—colonialism. If I were there; I would have stood up, denounce it loudly and leave, just on principle alone,” @isrive tweeted.

Others also weighed in about the Biden Puerto Rico press conference.

“Four abnormal people! Wow! Two PPD party members who shouldn’t even be there because they don’t even know how to speak English well and two PNP statehooders party members or at least claim to be but now we doubt that! Check out their past. A bunch of amateurs! This is what we call in Puerto Rico a political bacchanal!” another tweet said.

“Am sorry but in my mind, populares and PNP cannot sit at the same table. How can they agree on statehood if they take on different positions. If you don’t believe in statehood, how is the PPD part of the Democratic primary. WTF,” @LaSataAzul tweeted.

“It’s true that Trump will in the USA!!! But in Puerto Rico, the PNP and statehooders should vote for Biden so that Bernie Sanders loses. You cannot allow that 51 delegates representing Puerto Rico should go tot a Castro-Chavista socialist, who is supported by and is an associate of Carmen Yulín Cruz!,” @reneolympic said.

Then there is this response from @eliottricotti, who worked on the 2016 Sanders effort in Puerto Rico, which got 38% of the primary voters to Hilary Clinton’s 60%. 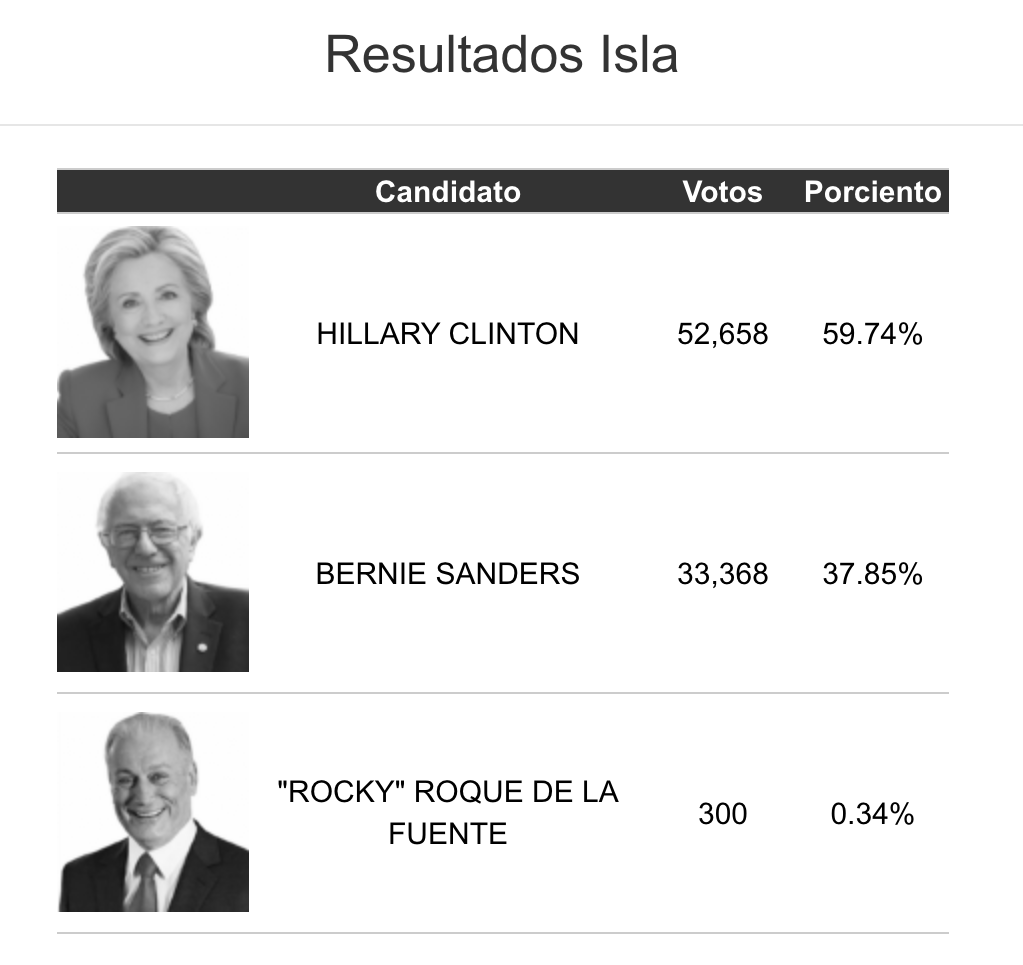 According to Ricotti, the 2016 Sanders effort was much more organic and ideologically diverse. Ricotti said that the local press treated it as such and that there were plenty of statehooders working on the campaign, but now the Yulín Cruz connection has discouraged some 2016 Sanders supporters to not support Sanders in 2020.

Not Happy With Sanders Staffing Choices

Bernie supporters who have collaborated with the campaign since 2016 believe that the mistakes of the past are being repeated.

“In a primary contest that has been so close and in which you need every single delegate available, it blows my mind that the campaign spent months without official representation here,” a Sanders supporter said. “The first person they officially named was Matt Berg, someone who has never dealt with Puerto Rican officials, as the representative of the campaign before the State Electoral Commission (CEE, in Spanish). In 2016 they made the same mistake when they named Betsy Franceschini to the same position. Betsy was great, but she had never dealt with the CEE before. Everyone in Puerto Rico knows that you need to name someone with institutional knowledge and connections.”

The lack of Puerto Ricans hired by the campaign has also confused Sanders supporters.

“I saw Chuck Rocha say in an interview that they were spending resources reaching out to Puerto Ricans in Florida, but when I asked their people in Florida how many organizers were Puerto Rican, they said zero. So, out of the 14 organizers in Florida, none are from Puerto Rico,” said another Bernie supporter.

On @InTheThickShow, @Maria_Hinojosa and I talked about @BernieSanders Sanders and Cuba comments. I shared what @ChuckRocha of Sanders campaign told me in Nevada about Sanders' chances in March 17 #FloridaPrimary. This is what Chuck told me.

A pro-statehood Sanders supporter also questioned why the official team in Puerto Rico was named so late in the game, and why all of them seem to be allies of Yulín Cruz.

“They named Arlene Payano as the state coordinator. The other people they named all have ties to Yulín. They are also sending two organizers from California. As if they couldn’t hire two people from here,” the Sanders supporter said.