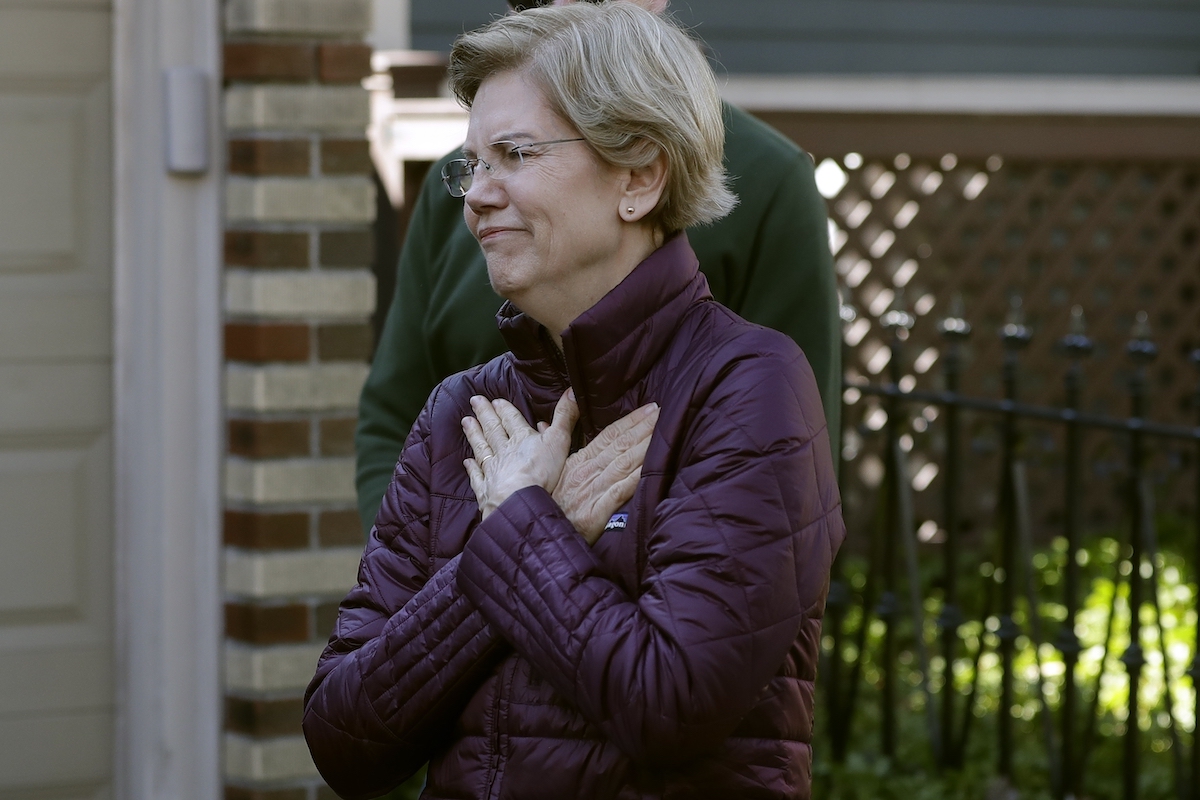 Sen. Elizabeth Warren, D-Mass., acknowledges supporters as she arrives to speak to the media outside her home, Thursday, March 5, 2020, in Cambridge, Mass., after she dropped out of the Democratic presidential race. (AP Photo/Steven Senne)

As the host of a Latinx politics and pop culture podcast that endorsed Elizabeth Warren, this past weekend was emotional. Bad Bunny released a long awaited second album and Warren modeled how to make light of the hard times with what Representative Alexandria Ocasio Cortez called a “legendary” video on Saturday Night Live.

ok this is legendary

What do these two moments have to do with each other? The intersection is perfectly captured by the chorus of Bad Bunny’s fifth track, “Yo Perreo Sola,” my new anthem until the November general election.

Why I Endorsed Warren

I worked in community development at the height of the foreclosure crisis as a representative of a large financial institution. I witnessed the devastating impact that predatory lending was having on communities like Santa Ana, CA, where I lived and where over 75% of the population is Latino. During that time, “Latinos saw a 42% decline in wealth between 2007 and 2013.”  And it was during this time that Senator Warren emerged to the national landscape as a voice for workers and consumers, which we know means millions of Latinos.

As the architect of the Consumer Financial Protection Bureau (CFPB), no other candidate in the 2020 Democratic race had accomplished more and, in less time, than Senator Warren. This is fact: “The independent agency returned more than $11 billion to 27 million American consumers in [its first five] years of existence.” If she could have that much impact joining Congress in 2012, imagine what impact she could have as President?

In 2014, I left my corporate gig to join the side of advocates working for UnidosUS (formerly the National Council of La Raza), a national Latino civil rights organization leading in creating housing and wealth-building opportunities for Latinos, among other issues impacting our community. Senator Warren addressed the UnidosUS annual conference in 2014 and 2016, and I became even more impressed and inspired by her. During her 2016 speech, she spoke about her track record of holding Wall Street accountable, called out candidate Trump as a bigot, and shamed him for his racist remarks about Mexican-American judge Gonzalo Curiel. Then and now, Warren was witty, smart, approachable, and strong—everything I admire in a leader.

When Senator Warren announced she was running for President, I was excited we had an accomplished progressive who had stood up to Trump, stomping during the 2016 election reminding us time and again what a “thin-skinned money grabber” we were up against. And I was excited that we had another real chance to elect the first woman as President, something that I knew would be transformative for a country that ranks 75th in representation of women in congress (that is 71 places behind Mexico by the way, nail emoji).

Seeing Warren destroy candidates during multiple Democratic debates with more coolness than pepinos con limón on a hot summer day only confirmed my view that she was the best candidate of my lifetime. (She even ranked high on Latino Rebels founder’s debate power rankings more than once.)

I DO GET $ FROM BILLIONAIRES@PeteButtigieg

When Julián Castro quickly endorsed Warren after dropping out of the race, I was thrilled about the prospect of him being her Vice President. What could be the greatest antidote to a racist billionaire that fueled his candidacy on the fear of Mexicans than a Warren/Castro 2020 ticket with our country’s first Mexican-American vice president?  The notion of this ticket was exciting, hopeful, positive. Words that have never rung true when I think of Joe Biden or Bernie Sanders.

Too Paralyzed by Fear to Elect a Woman

Despite my hope for this revolutionary ticket, what I heard time and again from many of my friends was fear. Fear that this 2020 election was not one we could risk. Fear that middle America would only find Biden appealing and that we could only vote for a safe, white, man. Fear that the country could not elect a woman, citing 2016 as proof.

But what was exciting about Biden? Especially given his reputation of ignoring personal boundaries at a time when the country is living through the #MeToo movement, and we are no longer turning a blind eye to the sexism, harassment, and the threats women face across all fields. Didn’t my friends see how much more inspiring Warren was given all she accomplished in a male-dominated, sexist world?  No. What they saw was Warren’s gender as a liability.

On the other hand, many of my friends were returning to Sanders, their 2016 favorite. What I could not get my friends to articulate is why not Warren? All they could say is “Warren is great, she’s my second choice.” No one that was in my circle of friends could make a stronger case for Bernie over Warren beyond saying he has had the same values his whole life. But what is the policy impact of that? Is it as much as that of the CFPB? What specifically has Bernie done that has transformed the lives of everyday Americans?

What I saw were two candidates with the same values, but only one with a convincing track record of success and substantive plans to build the country we want to see. It’s hard to pin the preference of Sanders over Warren on anything more than a gut feeling, or what Nathalie Molina Nino says are vague misnomers for what Warren doesn’t have…

Please don't call what Warren doesn't have an "it factor" or any other vague misnomer. What she doesn't have is a penis.

We have so much deep work to do.

In addition to the gender advantage, Sanders and Biden both have name recognition  Sanders hasn’t really stopped campaigning since 2016 and Biden enjoyed eight years of limelight and adorable memes.

Ultimately, Warren’s plans did not break through the noise of misogyny, a crowded field, and the media’s erasure of her after Iowa (where she did better than Biden by the way). And I don’t think Sanders calling her a liar on national TV did her any favors.  By the time the primaries came to my state of California and moderates aligned behind Biden, some progressives who preferred Warren felt the need to vote for Sanders as a strategy to ensure their values could move forward. So I was heartbroken, but not surprised to see Senator Warren suspend her campaign at the start of Women’s History Month.

Ni Biden Ni Bernie for Me

Now we are left with two candidates. Biden who counts on the alignment of centrist Democrats and continued mishaps when he is in front of a mic, and one who I will never forgive for not living progressive values by running in 2020 when a perfectly qualified and more accomplished progressive candidate was in the running. Neither Biden nor Sanders inspire me.

So, now that I don’t have a dog in this race, “Yo Perreo Sola,” and apparently so does Warren, choosing not to endorse either candidate (at least not at the time of my writing this). And good for her. Neither she nor I owe our endorsement to anyone.

So, I will be sitting back waiting until we have our candidate, and then I’ll support whoever it is because what I know none of us can afford is four more years of Trump.

Brenda Gonzalez is the creator of the Tamarindo Podcast. She tweets from @BrendaRicards.