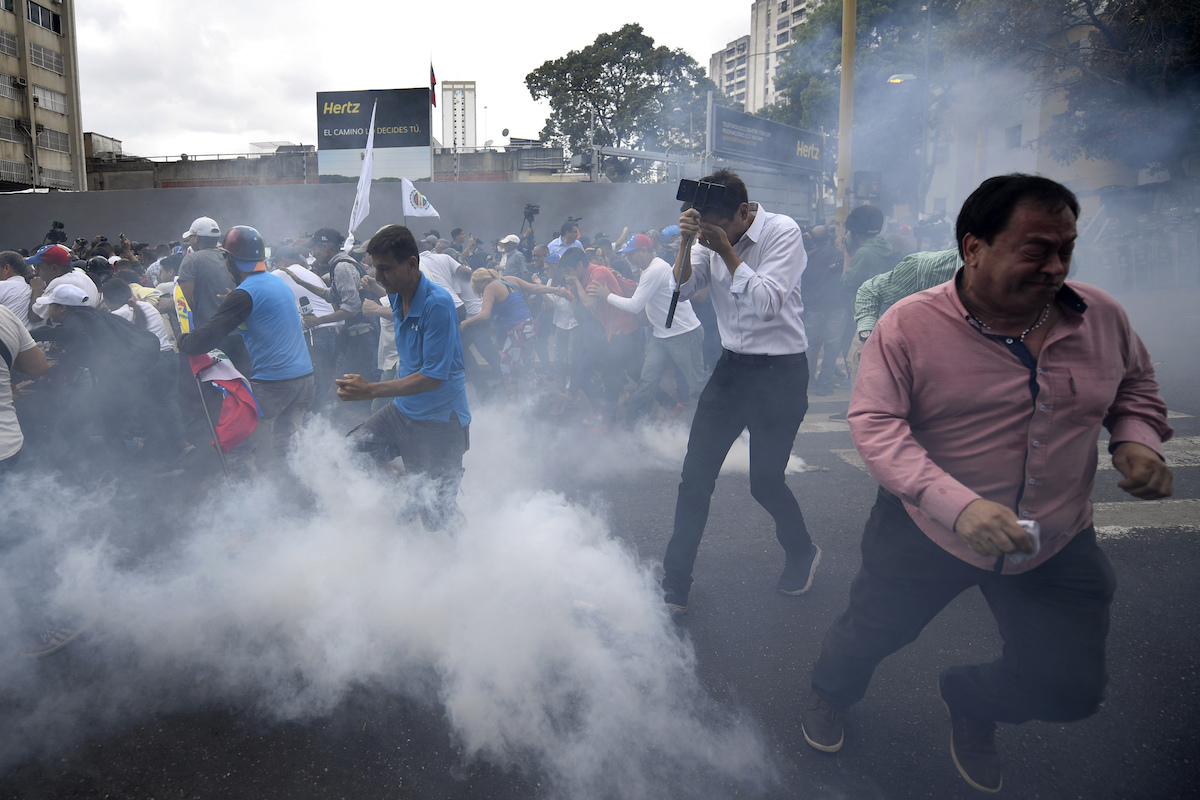 Thousands of demonstrators assembled in a leafy, anti-government neighborhood of Caracas with the goal of taking back the National Assembly, the country’s only opposition-dominated body whose chamber was seized over two months ago by a splinter faction of the opposition that claimed leadership of the legislature with the support of the ruling socialist party.

Many of the protesters were draped in the red, blue and yellow colors of Venezuela’s flag and banged on pots to draw attention to the humanitarian crisis in the oil-rich nation. Smaller protests took place in several cities across Venezuela.

But riot police wielding heavy shields and backed by armored vehicles blocked their progress downtown, where masses of red-shirted state workers and Maduro supporters held their own rally to show support for the revolution begun by the late President Hugo Chávez.

“They try to intimidate us with weapons of war,” Guaidó said from a megaphone. “We’ll keep going until we reach our goal.”

Clashes broke out as protesters flung rocks and sticks at police, who responded with volleys of tear gas that scattered the marchers. Guaidó then led a smaller group that reconvened in a safer part of town for an impromptu, outdoor session of the National Assembly. 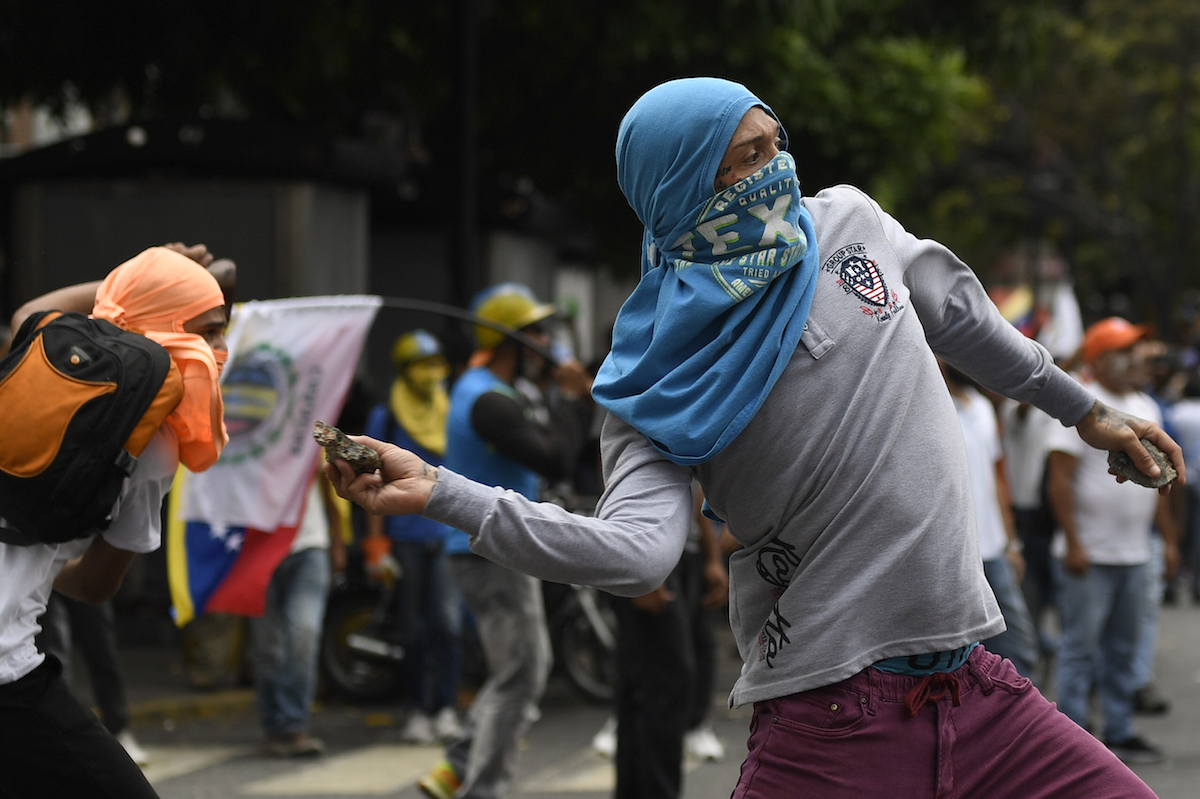 Addressing lawmakers, Guaidó repeated his refrain that the only solution to an economic and social crisis marked by hyperinflation and crumbling public services is free presidential elections.

But even some of his supporters are beginning to second guess that strategy. Henry Ramos, a lawmaker who heads the Democratic Action party, said that with a new presidential vote out of reach for now, it is time to start preparing for congressional elections that are scheduled for this year.

“What are we going to do? Stay at home and let the government grab the National Assembly?” Ramos said in a rare public break with Guaidó, who has ruled out participating in any legislative elections until the Maduro-stacked electoral council is overhauled.

Nearly 60 nations, led by the United States, recognize Guaidó, head of the congress, as Venezuela’s legitimate leader because they view Maduro’s 2018 re-election as fraudulent.

Guaidó initially drew wide support from huge crowds across Venezuela after he declared himself interim president last year based on a reading of the constitution that power should revert temporarily to the head of congress if the presidency is vacant.

But Maduro continues to hold all practical levers of power and Guaidó’s crowds have thinned in recent months. Tuesday’s rally was seen as a key test of whether he could reignite demonstrations following an international tour that took him to the White House as well as meetings with the leaders of Britain, France and Canada.

Tuesday’s mobilization was modest compared to a year ago, with some government critics staying home in fear of repression by security forces. Others stayed away because they have reconciled themselves to the imploded economy and are too busy trying to get ahead.

“Venezuelans might support Guaidó and oppose Maduro, but that does not mean they are going to spend their time and risk their well-being by mobilizing in the streets,” said David Smilde, a longtime Venezuela observer who teaches at Tulane University.

The country’s political and economic crisis has driven more than 4.5 million Venezuelans to migrate from the once-wealthy South American nation, escaping soaring inflation, scarcity of basic goods and unreliable services, such as power and water.

Since returning to Caracas last month, Guaidó has been met with fierce resistance by armed civilians and security forces loyal to Maduro. 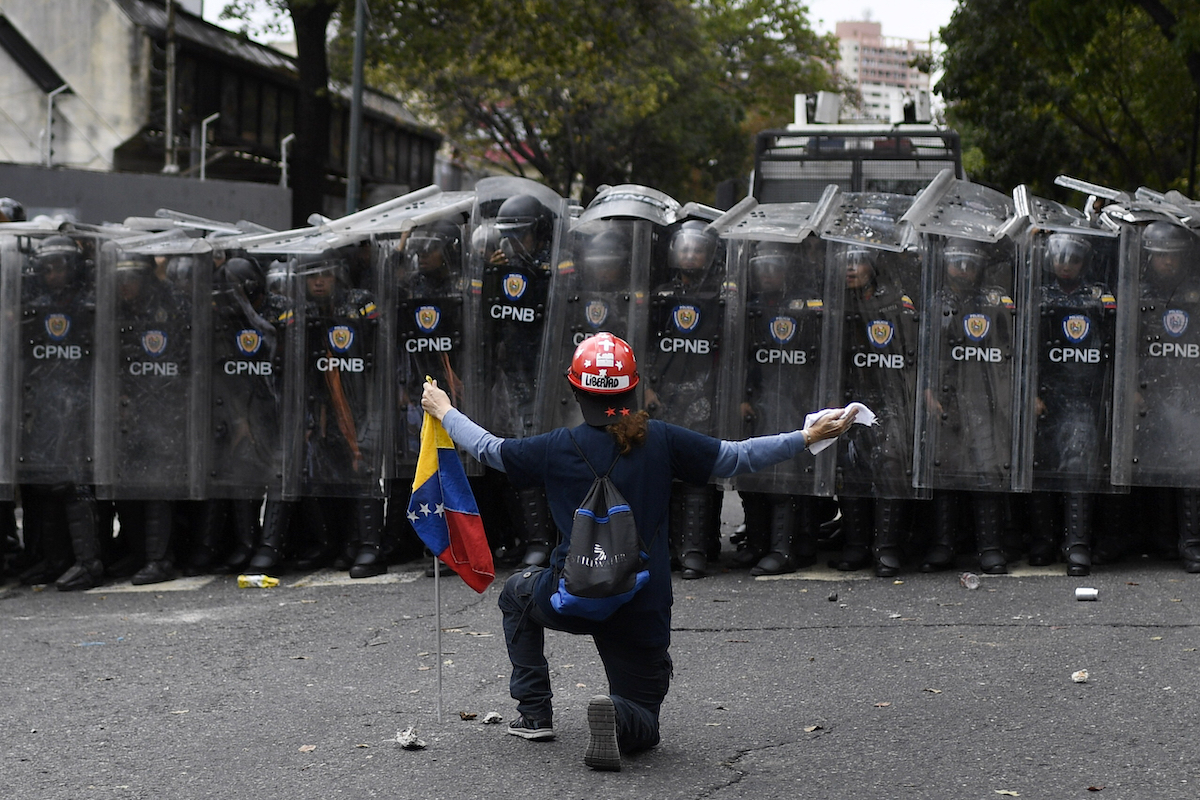 Those attacks drew condemnation Tuesday from Michelle Bachelet, the U.N.’s high commissioner for human rights, who said she was concerned about the arrest of opposition figures and recent attacks on demonstrators and journalists who covered Guaidó’s return to Caracas.

She said in a statement that her office continues to receive allegations of “cruel, inhuman or degrading treatment” at military counterintelligence prisons.

At the pro-government rally in Caracas, Maduro ally and powerful socialist party boss Diosdado Cabello criticized Bachelet, saying she lacks “moral authority” to criticize Venezuela’s administration. He said Bachelet, a former Chilean president, has turned a blind eye to violent protests recently in her homeland as well as violence in Colombia. 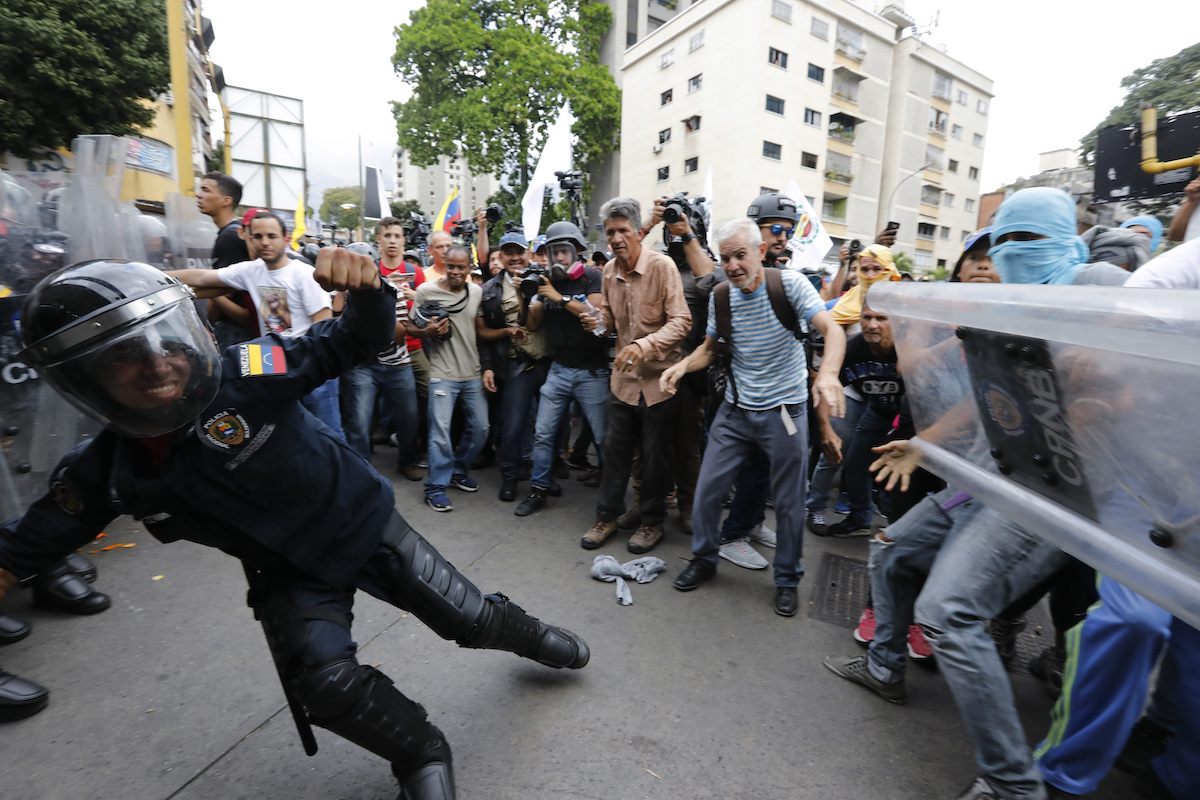 Cabello also said the socialist government doesn’t care whether or not the opposition competes in the legislative elections.