‘We Are Collapsing’: Virus Pummels Medics in Spain and Italy 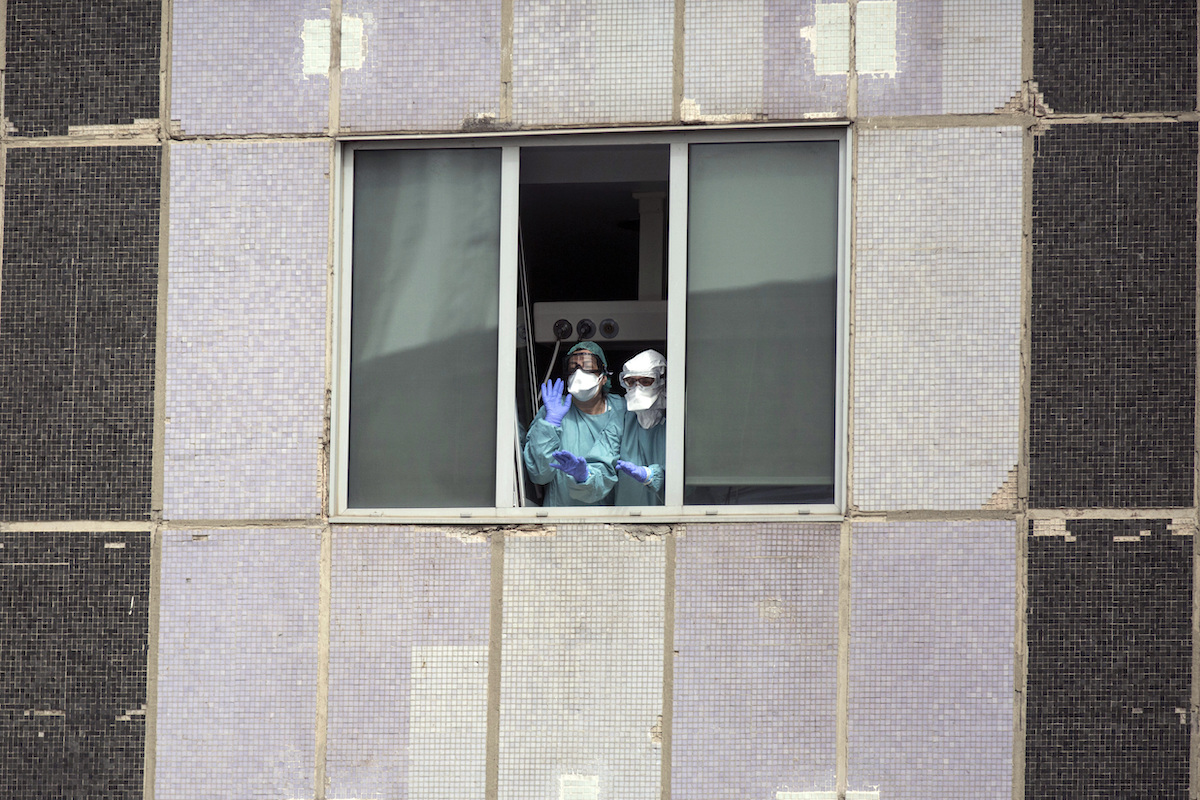 MADRID (AP) — By the time Patricia Núñez’s cough started, she was already familiar with the dreaded dry hacking sound tormenting patients who had for weeks been filling the Madrid emergency ward where she works.

“We were fed up of hearing it at the hospital, so it was just a matter of time before I would contract it,” said Núñez, a 32-year-old nurse who tested positive for the new coronavirus about a week ago.

Speaking via video call from her home, Núñez said she is eager to recover, so she can relieve overworked colleagues dealing with a rising wave of patients and dwindling numbers of healthy nurses and doctors.

“The worst thing is that you need to stay at home, worried about infecting relatives, while knowing that you are dearly needed at work,” she told The Associated Press.

The coronavirus is waging a war of attrition against health care workers throughout the world, but nowhere is it winning more battles at the moment than in Italy and in Spain, where protective equipment and tests have been in severely short supply for weeks.

Spain’s universal health care system is a source of national pride and often hailed as a reason for its citizens’ legendary longevity, but the outbreak is exposing its shortcomings, some of which are the result of years of budget cuts.

The country’s hospitals are groaning under the weight of the pandemic: Video and photos from two hospitals in the Spanish capital showed patients, many hooked up to oxygen tanks, crowding corridors and emergency rooms. At the 12 de Octubre University Hospital, patients could be seen on the floor as they waited for a bed in recent days. The hospital says the patients have since been accommodated elsewhere.

On Wednesday, the number of medical personnel infected was nearly 6,500 nationally, health authorities said, representing 13.6% of the country’s 47,600 total cases and about 1% of the health system’s workforce. At least three health care workers have died.

“We are collapsing. We need more workers,” said Lidia Perera, a nurse who works with Núñez at Madrid’s Hospital de la Paz, which has 1,000 beds. 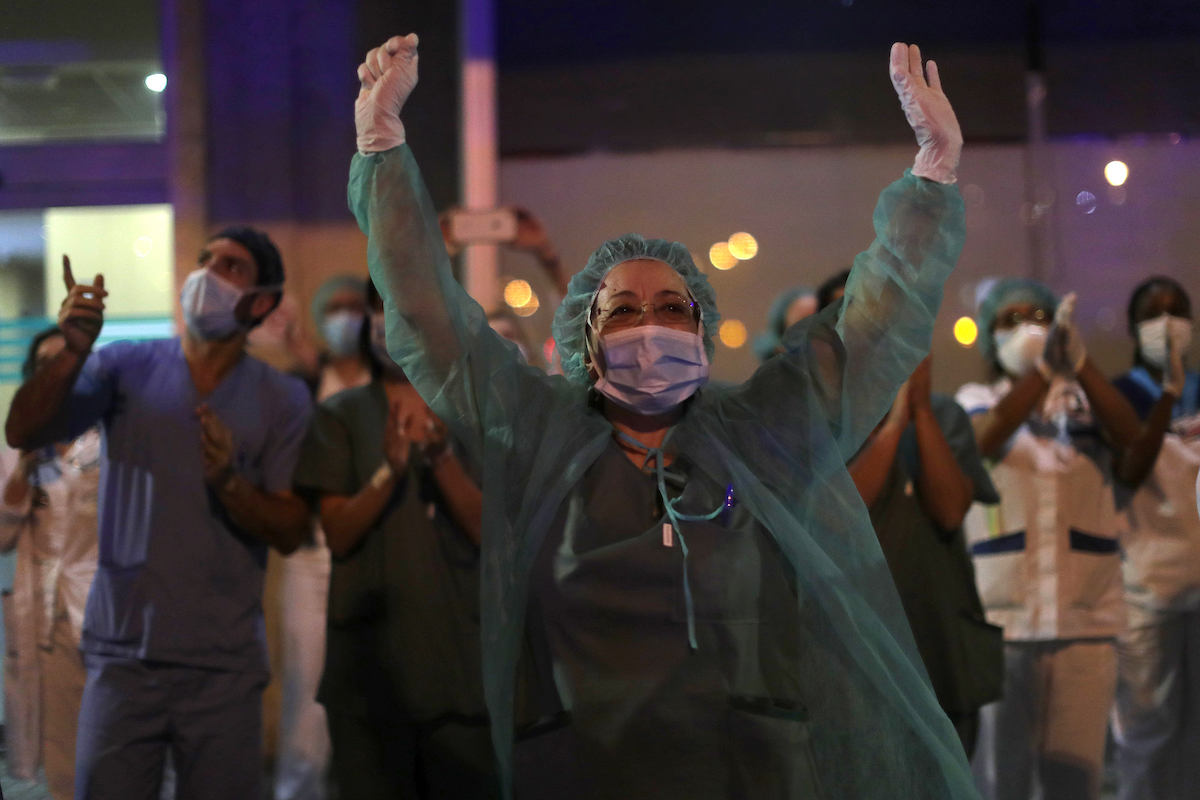 In this Saturday, March 21, 2020 photo, health workers react as people applaud from their houses in support of the medical staff that are working on the COVID-19 virus outbreak at the Jimenez Diaz Foundation University hospital in Madrid, Spain. (AP Photo/Manu Fernández, File)

This week, 11 of the hospital’s 14 floors are devoted to caring for those suffering from COVID-19, and there is still not enough room: The patients with less serious cases of the disease are being put in the hospital’s gym or in a large tent outside.

“If you had told me three months ago that I would be working in these conditions in Spain, I wouldn’t have believed you,” Perera said, adding that staff at La Paz are only being tested for the virus if they have symptoms. “If they did [regular testing], they might end up without any workers.”

Widespread infections among health workers reflect the universal difficulty of stemming the spread of the pandemic. But sick health workers do double damage: They add to the toll while also hampering the ability to respond to the crisis. On top of that, they raise the specter of hospitals becoming breeding grounds of infection.

Spain’s experience has been reflected elsewhere.

“Even if we do everything else right, if we don’t prioritize protecting health workers, many people will die because the health worker who could have saved their lives is sick,” Tedros Adhanom Ghebreyesus told journalists.

In Italy, where nearly one-tenth of about 70,000 infections are among medical workers, doctors and nurses have been begging the government daily to provide more masks, gloves and goggles.

Italian media have reported at least 19 deaths among health professionals in the country, which leads the world in coronavirus fatalities.

There was no immediately available data on infections among health care workers in the United States. Neither Iran nor France is disclosing those figures.

But in China, where the outbreak started and where more than 80,000 people became infected in three months, over 3,000 medical workers were believed to have fallen ill by the end of February, according to Dr. Liang Wannian, the leader of a team of Chinese experts working with WHO to study the outbreak. 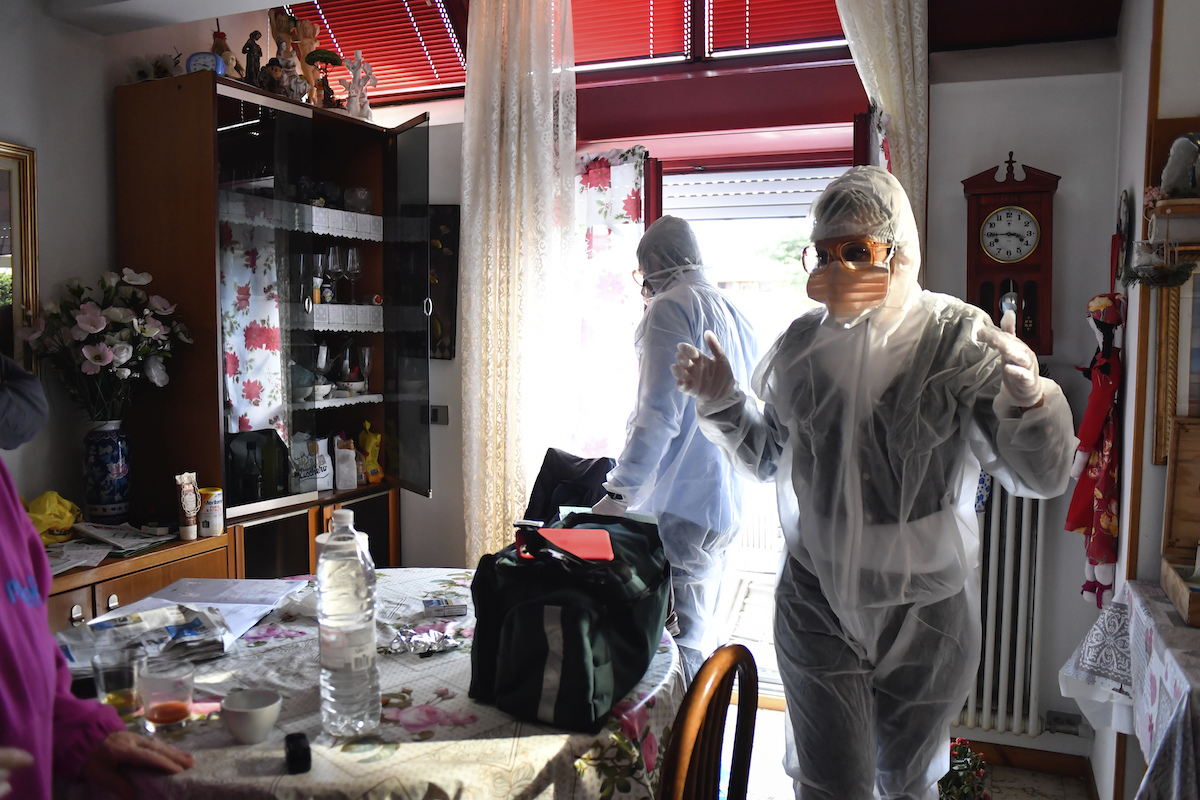 For most people, the new coronavirus causes mild or moderate symptoms that clear up in two to three weeks. For some, especially older adults and people with existing health problems, it can cause more severe illness, including pneumonia and death.

Spanish authorities have repeatedly said that protecting medical staff is central their efforts to do what’s known as “flattening the curve”: spreading out the time period of over which infections occur, in order to reduce the burden on intensive care units. But health workers say that even simple things such as gowns and masks are still in short supply, as are tests.

“All over the country, you see examples of workers inventing homemade suits using plastics,” said Dr. Olga Mediano, a lung specialist in Guadalajara, some 65 kilometers [40 miles] east of Madrid.

In response to the criticism, authorities have promised to distribute hundreds of thousands of masks and COVID-19 fast tests this week. On Wednesday, Health Minister Salvador Illa announced a 432-million-euro purchase of Chinese medical material, including 500 million masks, 5.5 million test kits and 950 ventilators.

Authorities have also called up over 50,000 additional workers, including recent graduates and retired doctors and nurses.

Asked about supply shortages, the head of Spain’s health emergency coordination center acknowledged that the country has struggled to secure the necessary equipment.

“There is an international fight now to acquire the needed supplies,” Fernando Simón said Wednesday.

For many health professionals, the virus itself is only one part of the equation: The overwork, the constraints on physical contact with patients, and the stress of knowing they are putting their own loved ones at risk also have an emotional toll.

Perera said watching patients die alone is “killing all of us inside.”

“Physically this is extremely complicated, but psychologically it is appalling,” said Núñez, the recovering nurse. “But we need to deal with the outbreak first, and then we’ll think later how to deal with the knock-on effects that it leaves in each of us.”

Wilson reported from Barcelona, Spain. Associated Press writers Angela Charlton in Paris, Nicole Winfield and Frances D’Emilio in Rome, Maria Cheng in London, Ken Moritsugu in Beijing, and Nasser Karimi in Tehran, Iran, contributed to this report. The Associated Press receives support for health and science coverage from the Howard Hughes Medical Institute’s Department of Science Education. The AP is solely responsible for all content. Follow AP coverage of the virus outbreak here and here.