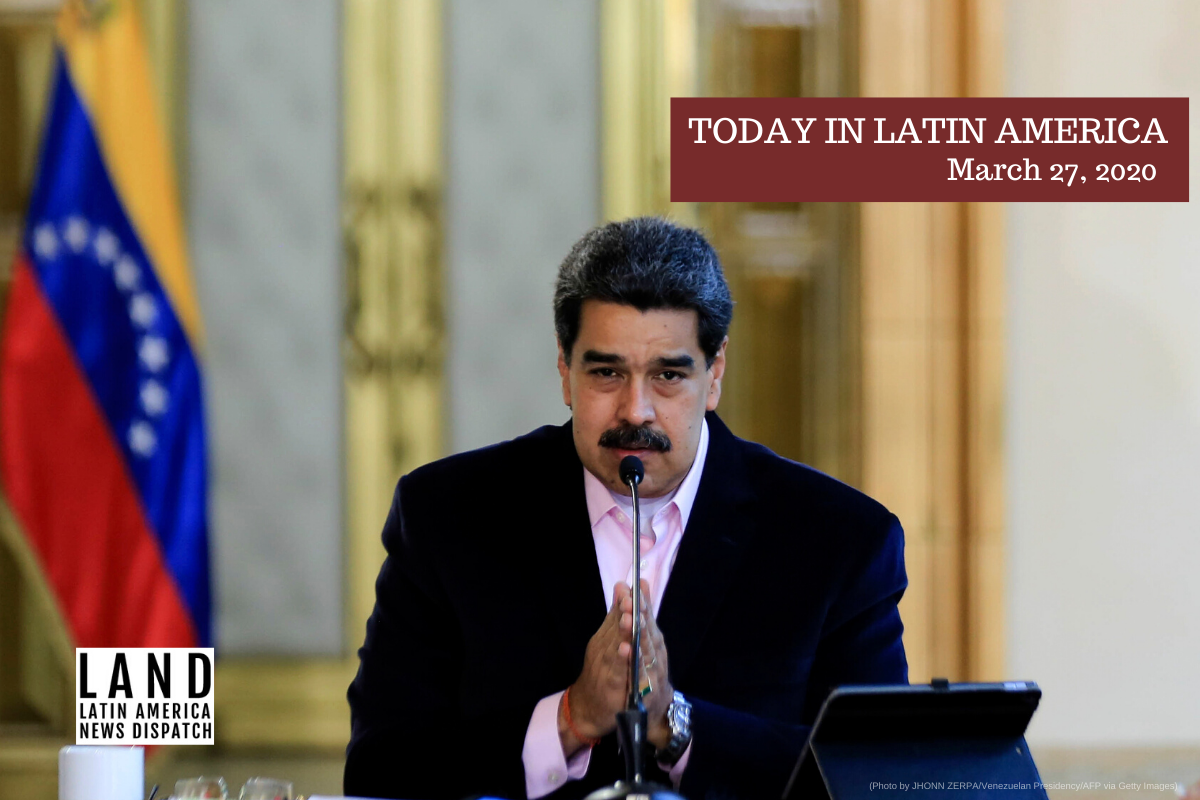 UNITED STATES-VENEZUELA: U.S. Attorney General William Barr announced an indictment of President Nicolás Maduro. At a press conference on Thursday, Barr, along with the head of the Drug Enforcement Administration, and the top federal prosecutors in Manhattan and Miami, accused Maduro of conspiring with a faction of the Colombian Revolutionary Armed Forces (FARC) rebel group “to flood the United States with cocaine,” and “devastate American communities.”

According to court documents, Maduro led a drug trafficking organization called Cartel de Los Soles as he consolidated power in Venezuela. Maduro allegedly negotiated multi-ton shipments of cocaine produced by the FARC, directed the cartel to provide weapons to the group and cooperated with Honduras to facilitate large-scale drug trafficking. In addition to Maduro and the FARC, more than a dozen others were charged, including Venezuelan government and intelligence officials.

The indictment is an escalation in the Trump administration’s efforts to push Maduro out of office. Even if the charges do not lead to his capture, they are seen as contributing to the U.S. government’s “maximum pressure” foreign policy. Venezuela’s foreign minister Jorge Arreaza said that President Donald Trump was “once more attacking the Venezuelan people and its democratic institutions, using a new form of coup d’etat based on miserable, vulgar and unfounded accusations.”

BRAZIL: Governors sent a letter to President Jair Bolsonaro, saying they will continue with isolation methods and urging federal officials to cooperate. Bolsonaro has said schools and business should be reopened and claimed the “cure” of shutdowns is worse than the disease. He says a shutdown will only weaken the economy and create social unrest. The rebellion against Bolsonaro includes some of his usual allies. São Paulo governor João Doria threatened to sue the federal government if it interfered with  the state’s measures, according to the Associated Press.

CHILE: Officials sent an administrative request to the homeless population urging them to “stay home,” wash their hands, and maintain good hygiene to prevent them from contracting and spreading the coronavirus. Sebastian Sichel, Chile’s Social Development and Family Minister, stated the homeless population should return to their houses. National statistics indicate more than 14,000 Chileans are experiencing homelessness and have no access to food, water, or electricity. The request provoked reactions and mockery. Chileans have criticized President Sebastian Piñera’s approach to the health crisis.

PERU: Local residents in Culden, Peru attacked nearly 500 bats with fire due to fear of the coronavirus. After hearing the false rumor that the pandemic started in China when people ate bat soup, Culden locals lit up torches to burn the bats. The National Forest and Wildlife Service (SERFOR) stated that around 300 bats were killed in this collective attack. SERFOR personnel alongside the National Agrarian Health Service (SENASA) were able to save around 200 others and set them free. Culden has one reported case of coronavirus.

VENEZUELA: United Nation’s Secretary General, Antonio Guterres, urged the U.S. to waive economic sanctions on Venezuela to “ensure access to food, essential health supplies, and Covid-19 medical support.” Venezuela joined countries  including China, Iran and Cuba, who are seeking for sanctions to be lifted so they can effectively fight the coronavirus. Michelle Bachelet, the UN’s High Commissioner for Human Rights, supports the measure. She fears that sanctions could impact Venezuela’s ability to obtain essential medicines and equipment.

DOMINICAN REPUBLIC: President Danilo Medina announced a temporary stimulus plan of over $6 billion on Wednesday to assist 5.2 million Dominicans. The package is intended to help low-income workers and families, so that they are able to stay home to prevent the spread of the coronavirus. The “Stay at Home” program will provide monthly payments of 5,000 pesos —roughly $55 USD— from April 1 through the end of May. The program will help 811,000 families holding the “Solidarity Card” who already receive financial assistance, as well as an additional 690,000 families who have been identified as low-income by the Dominican Unique Benefits System (SIUBEN).

PUERTO RICO: Governor Wanda Vázquez extended the curfew on the island until April 12, as stricter measures are put in place to prevent the spread of coronavirus. Starting on March 31, all supermarkets will close on Sundays and quarantine will begin each night at 7:00 p.m. until 5:00 a.m. the next day. Other essential businesses such as pharmacies, gas stations, and banks will stay open, while limiting the number of people allowed to enter their buildings. Vázquez also announced new rules regarding car traffic, limiting the number of drivers on the road according to the last number of their license plates. Doctor Lorenzo González was appointed to be the new health secretary. There are now 64 confirmed cases of coronavirus in Puerto Rico.

COSTA RICA: Two universities are in the process of creating emergency ventilators in preparation for an increase in cases of the coronavirus. One prototype ventilator being built at the University of Costa Rica costs roughly $140, and is easy to manufacture and distribute quickly throughout the country. While the design cannot substitute a commercial ventilator, it could be used temporarily for emergency support to patients before they are admitted to a hospital. Another prototype designed at the Costa Rica Institute of Technology can be constructed with a 3D printer. The country’s public health system projects that it will have 700 professional-grade ventilators available, but many of these will not arrive for over a month. There are 201 confirmed cases of coronavirus in Costa Rica, and two deaths.

HONDURAS: Soldiers hand-delivered two weeks worth of groceries to at least 3.2 million people who have been ordered to stay at home on lockdown. The move came after protests throughout Tegucigalpa on Tuesday, when residents demanded food, citing their inability to work or buy groceries. The lockdown, which has shuttered businesses, government offices and public transportation, is part of the government’s attempts to stop the spread of the coronavirus. So far only 36 cases have been reported. There are no reported deaths attributed to the virus. Distribution began in the neighborhood of Los Pinos in the capital, and the army plans to continue distribution of food and sanitary supplies to the cities of San Pedro Sula, La Ceiba and Choluteca.

NICARAGUA: The Higher Council of the Nicaraguan Private Company (COSEP)  has asked for more transparency from the government in disclosing the number of cases of coronavirus in the country. COSEP also called on Ortega’s administration to decentralize testing centers, and allow for Covid-19 tests to be conducted in private hospitals. As of now, the test is only administered at the National Center for Diagnosis and Reference of the Ministry of Health. The Ministry of Health offers daily press conferences regarding the status of the virus, but only with media that are linked to the government. As of March 25, there were two reported cases of coronavirus in the country, and 12 patients under observation.

MEXICO: Residents in the state of Sonora wore face masks and held “stay at home” signs in a protest to keep untested American travelers from crossing the U.S.-Mexico border. The border is supposed to be closed to all except “essential” travelers, but according to protesters, there has been little enforcement and testing by authorities. José Luis Hernández, a member of Sonorans for Health and Life, told the Arizona Republic: “We’ve taken this action to call on the Mexican President Andrés Manuel López Obrador to act now.”

MEXICO: Human rights groups denounced a crackdown on migrants in Mexico who were protesting over fears they will contract the coronavirus in the country’s largest detention center. Local rights groups, such as the Collective for the Observation and Monitoring of Human Rights in Southeastern Mexico have long criticized the facility’s overcrowding and poor sanitation practices. According to the group, law enforcement’s response to the protest was violent. “We strongly condemn all acts of violence and disproportionate use of force against people, men, women and adolescents in immigration detention,” the organizations said in a statement.