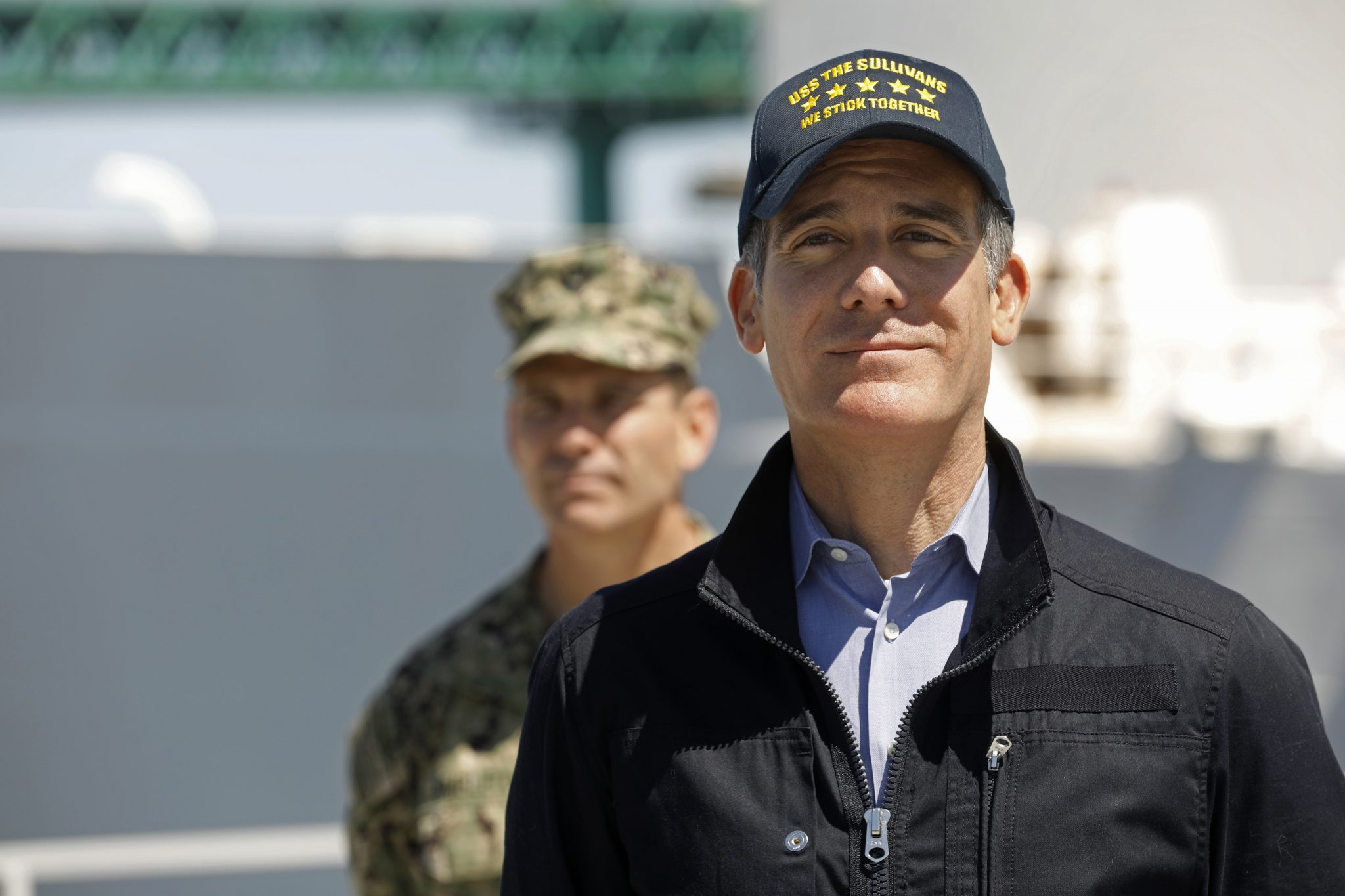 NEW YORK (AP) — In Los Angeles, Mayor Eric Garcetti has instituted a shutdown on a city of nearly 4 million people and threatened uncooperative business owners with power shutoffs and arrest.

In Mississippi, home to nearly 3 million people, Gov. Tate Reeves has allowed most businesses to stay open—even restaurants, so long as they serve no more than 10 people at a time.

The divergent approaches are evidence that not even a global pandemic can bridge the gaping political divisions of the Trump era. The fierce tribalism that has characterized debates over immigration, taxes and health care is now coloring policy-making during a coronavirus outbreak that threatens countless lives and local economies across nation.

There are exceptions, but Republican leaders have been far more likely to resist the most aggressive social distancing measures, emboldened by President Donald Trump’s initial rosy outlook and a smaller early caseload in their more rural communities across middle America. But in the more crowded population centers on the East and West coasts where the disease first appeared, the Democrats in charge have been more willing to embrace strict steps such as curfews, sweeping business closures and law enforcement assistance.

“This epidemic has been a window into our politics,” said Larry Levitt, who leads health policy for the Kaiser Family Foundation, which has been tracking responses. “Particularly over the past couple of weeks, a political divide has emerged.”

It is an election year divide that could have deadly consequences.

As his campaign struggles for attention, leading Democratic presidential contender Joe Biden has called for a nationwide lockdown to replace the patchwork of local responses, which have varied even among neighboring communities in the same states. Trump, meanwhile, is largely allowing local officials to choose their own course and has encouraged them to compete for scant federal resources. 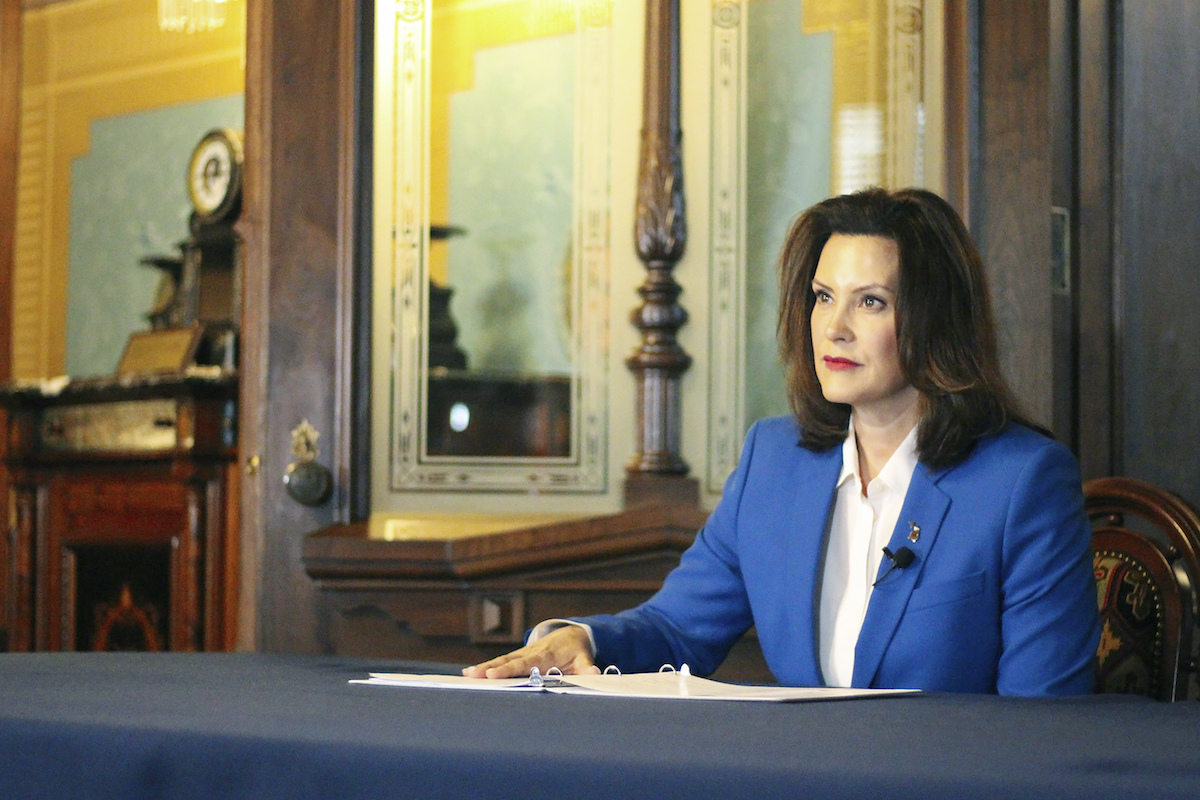 Politically, the strategy may be working for the first-term Republican president. With the election seven months away, Trump’s favorable ratings are ticking up, even if his numbers have fallen short of past presidents during times of crisis. Yet the GOP’s loyalty will almost certainly be tested in the weeks ahead as the virus spreads from the blue-state coastal communities deeper into red-state middle America.

Democrats like Garcetti fear the politics that are shaping conflicting pandemic responses will have real-world consequences far more important than the next election.

“I do worry that making this a partisan issue will kill more people in redder states,” the Los Angeles mayor said in an interview. “There is no way to keep this out of your city.”

In Mississippi, Reeves has adopted many social distancing measures such as limiting groups to 10 people, even if he’s resisted some of the most aggressive steps. In an interview late last week, the Republican governor reiterated his opposition to a stay-at-home order, adding that he’s heeding the guidance of state health officials and Vice President Mike Pence himself, who told him directly during a recent conversation that the Trump administration is not recommending a blanket shutdown. 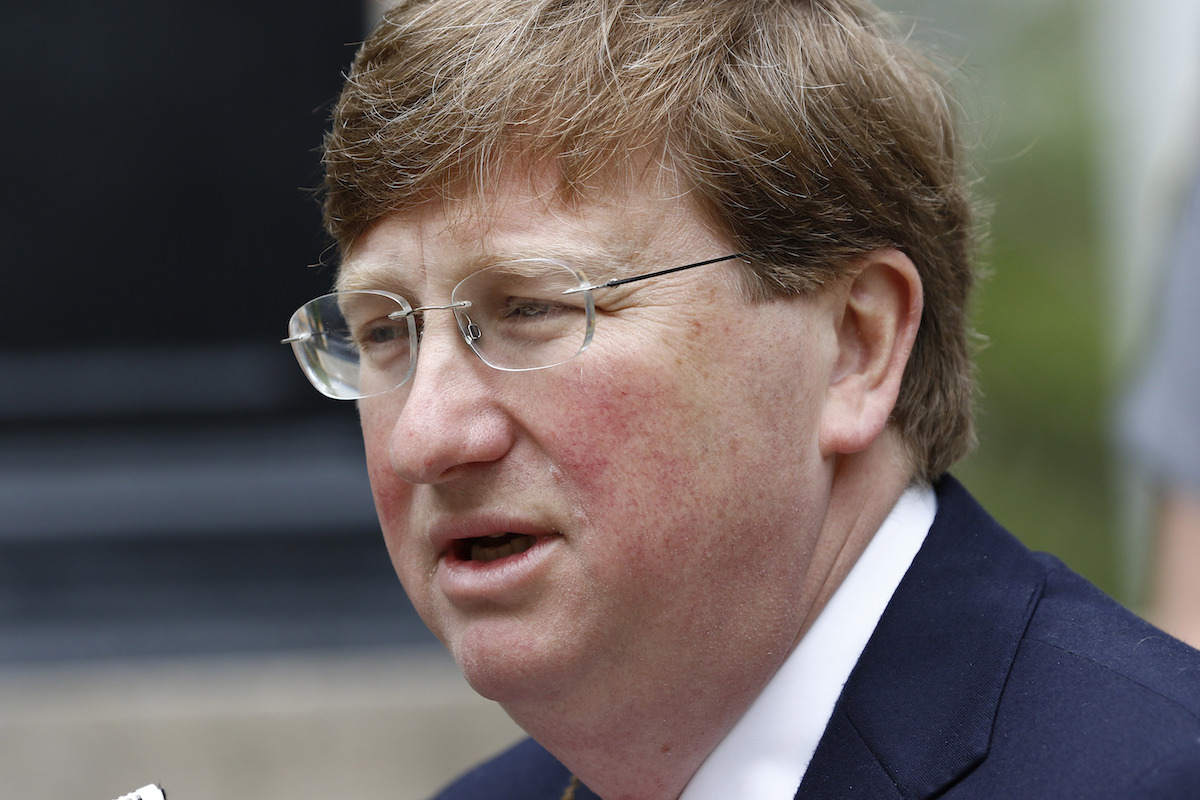 In this Tuesday, March 24, 2020, file photo, Mississippi Republican Gov. Tate Reeves speaks with reporters outside the Governor’s Mansion to give an update on the current situation of the new coronavirus in the state and discuss Mississippi’s ongoing response to slow the spread, in Jackson, Miss. (AP Photo/Rogelio V. Solis, File)

Reeves dismissed those who think he’s not doing enough as enemies of Trump who “don’t like the fact that I’m a conservative and I’m willing to pray.”

He warned that extended social distancing orders could cause a more dangerous fallout than the pandemic by destroying the nation’s economy.

“I don’t think there’s any doubt that if the United States found themselves in a severe depression with 20% to 30% unemployment that the abject poverty that could create could lead to more health problems than this particular virus is causing,” Reeves said.

He added: “One size doesn’t fit all in this country.”

No nation has more documented cases of the deadly virus than the United States, which surpassed 143,000 total infections and 2,400 related deaths as of Monday morning. Yet Trump’s coronavirus task force coordinator, Dr. Deborah Birx, reported Monday that the nation has perhaps only seen roughly 1% or 2% of the total number of deaths expected in a best-case scenario.

But she warned that every part of the country isn’t perfectly responding “in a uniform way to protect one another.”

The partisan divide in infections and responses is difficult to ignore.

Fifteen of the 21 states that have issued statewide stay-at-home orders so far are led by Democratic governors, according to Kaiser. The Republican-led holdouts include Florida, where Gov. Ron DeSantis has so far agreed with Trump’s preference for a more incremental approach in the premier swing state, suggesting that restrictive measures be put in place only in the hardest-hit counties.

All 50 states have reported cases, but the seven with the most infections are led by Democrats. New York may offer a cautionary tale for other states: The state reported its first case on March 1 and nearly reached 60,000 infections and 1,000 deaths on Monday.

The bottom six states in total cases are rural states led by Republicans. Numbers have been escalating virtually everywhere, however, particularly in more populous red states like Louisiana, Tennessee and Texas, which reported more than 8,100 cases and 200 deaths combined as of Monday.

Some Republicans have been more assertive than others.

Maryland Gov. Larry Hogan, a Republican, has split with Trump over when normal life might resume. And Ohio’s Republican governor, Mike DeWine, has been one of the most aggressive leaders in either party, banning spectators from sporting events the first week of March. He was among the first governors in the nation to close public schools. 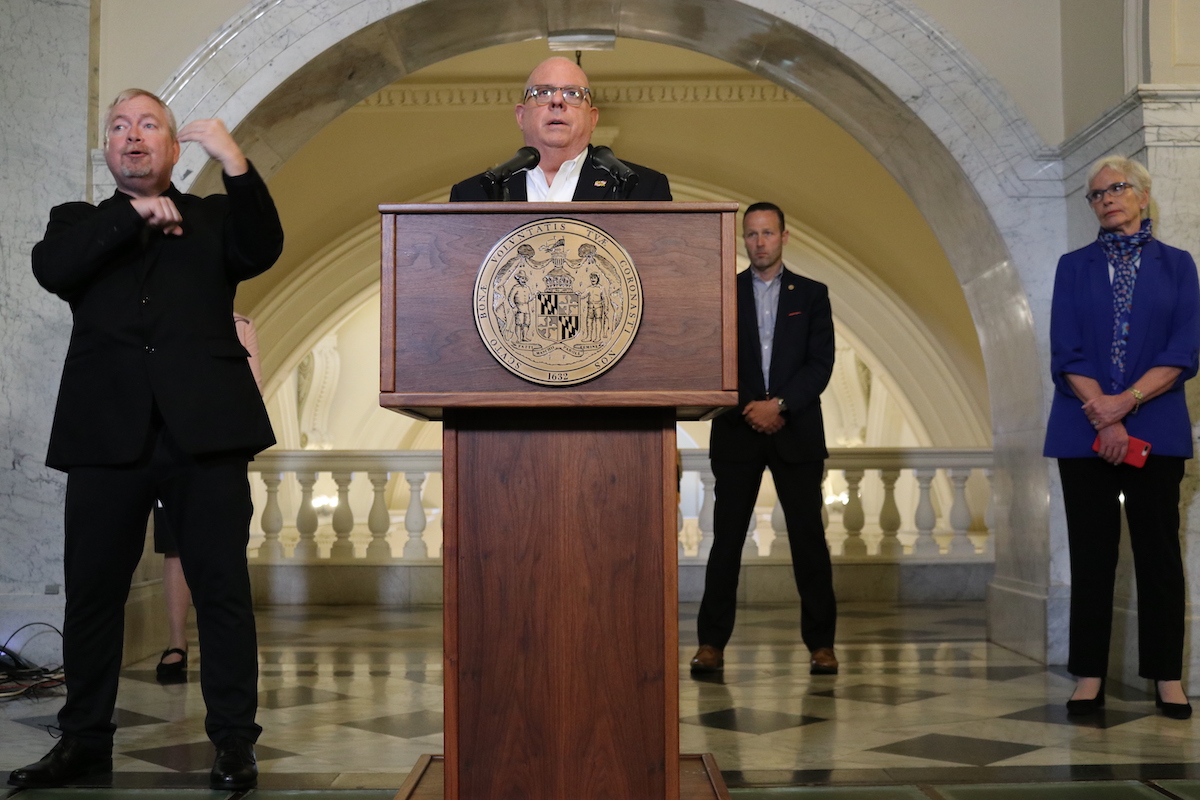 Maryland Gov. Larry Hogan talks about the state’s response to the new coronavirus during a news conference on Wednesday, March 25, 2020, in Annapolis, Md. (AP Photo/Brian Witte)

Aggressive steps by DeWine and others, however, have been complicated by Trump’s inconsistent rhetoric. After repeatedly downplaying the threat at first, the Republican president adopted a more serious tone before suddenly suggesting last week that the worst could be over by Easter, which is April 12. He has now reversed that view, calling it an “aspiration,” with the extension of the social distancing guidelines through April.

Trump has also engaged in a war of words with Democratic governors in key states, like Michigan and New York, where elected officials have openly complained about the lack of federal assistance to stem a dangerous shortage of coronavirus tests and medical equipment.

Many conservatives have cheered Trump’s response, particularly his reluctance to encourage a nationwide stay-at-home order.

“They have no right to tell me I need to stay in my house. They cannot impose a travel ban on me. They can’t. it’s unconstitutional,” said Texas-based activist Mark Meckler, a co-founder of the Tea Party Patriots who now leads the Convention of States Project. 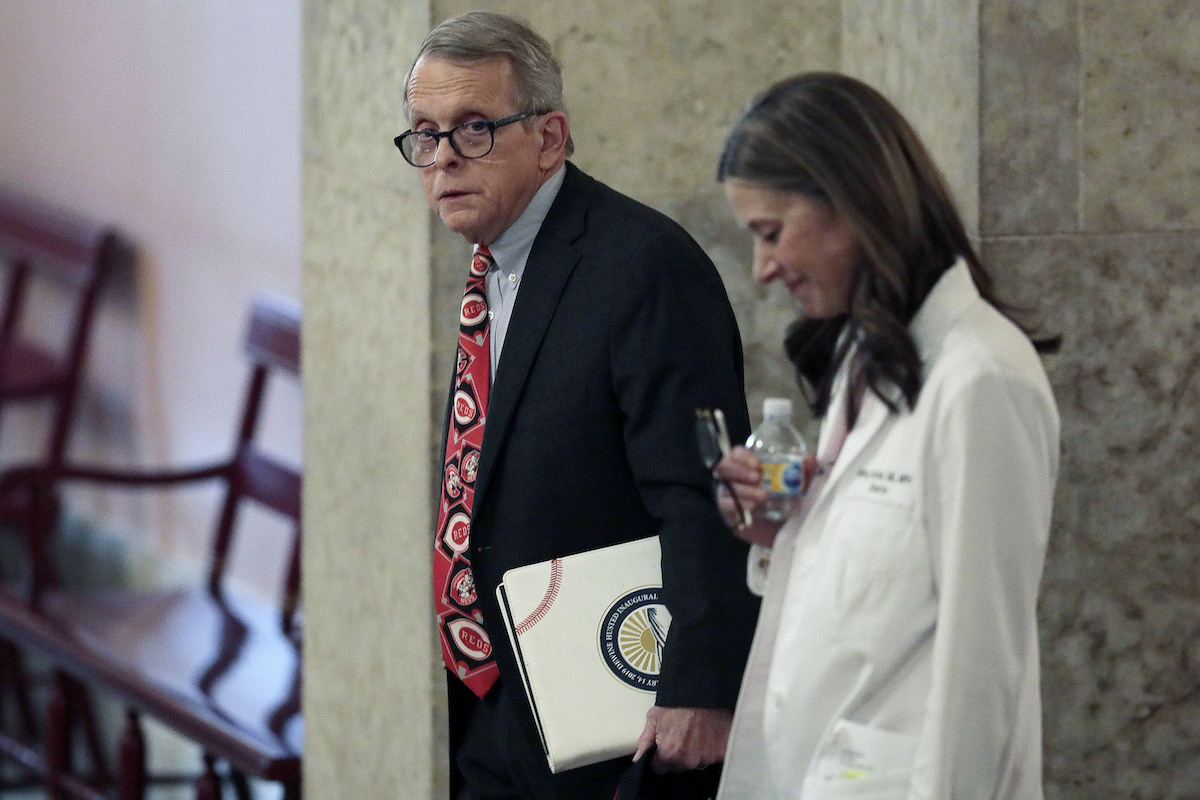 Ohio Gov. Mike DeWine, left, and Dr. Amy Acton, director of the Ohio Department of Health, leave the State Room before their daily update on the states response to the ongoing COVID-19 pandemic on Thursday, March 26, 2020 at the Ohio Statehouse in Columbus, Ohio. (Joshua A. Bickel/Columbus Dispatch)

Meckler began conversations in recent days with other grassroots conservatives leaders to explore the possibility of filing lawsuits to block some of the more aggressive social distancing measures. In the meantime, he’s encouraging like-minded conservatives to embrace “peaceful resistance.”

“I’m not going along with it,” Meckler said. “It doesn’t mean we won’t be smart, but we don’t want to be sheep.”

Meanwhile, the numbers are shooting up in California, which has reported more than 6,300 infections and 130 deaths as of Monday morning.

Los Angeles Mayor Garcetti has assigned teams of city workers to ensure non-essential local businesses are complying with shut down orders. He is empowered to shut off their water and power if necessary, and the California Democrat has authorized the police to arrest those who continue to resist.

Garcetti said there have been no shutoffs or arrests so far and predicts that “99 out of 100 will comply.”

He also offered a dire message to Republicans who have resisted similar steps: “In the projections, you could see this taking tens of thousands of lives in America or millions. You chose. But I don’t think anybody wants the second to be on their hands.”

Catch up on the 2020 election campaign with AP experts on our weekly politics podcast, “Ground Game.”