Pastor Silas Malafaia delivers a sermon, transmitted live through social networks, inside the empty Assembly of God Victory in Christ Church, amid a lockdown to help contain the spread of the new coronavirus in Rio de Janeiro, Brazil, Sunday, March 29, 2020. (AP Photo/Leo Correa)

RIO DE JANEIRO (AP) — Like every Sunday, Brazilian Pastor Silas Malafaia took the stage of his Pentecostal temple in a middle-class Rio de Janeiro neighborhood. But this week, he wore a T-shirt instead of a blazer and, behind the three cameras broadcasting to his legion of YouTube followers, were thousands of empty seats.

Brazil’s churches have landed on the front lines of a battle between state governors, who have introduced quarantine measures designed to contain spread of the new coronavirus, and President Jair Bolsonaro, who is actively undermining them and says a broad lockdown will ultimately destroy Brazil’s economy.

Brazil’s politically powerful evangelicals helped bring the far-right president to power in the 2018 election and Bolsonaro is letting them know they aren’t forgotten, political analysts said. The most influential pastors are backing the president’s radical coronavirus stance while begrudgingly respecting governors’ orders, and either canceling services or moving them online. There are signs some churches are disobeying.

“I’m asking, which is worse: coronavirus or social chaos?” Malafaia, one of Brazil’s most prominent pastors who leads the Assembly of God Victory in Christ Church, told The Associated Press. “I can guarantee you that social convulsion is worse.”

It mirrors the argument of Bolsonaro, who has urged governors to abandon lockdown and likened COVID-19 to a “little flu” that mainly threatens the elderly and those with preexisting health problems. On Sunday, he hit the streets wearing no gloves or mask and joined multiple gatherings, in defiance of recommendations from his own health ministry. 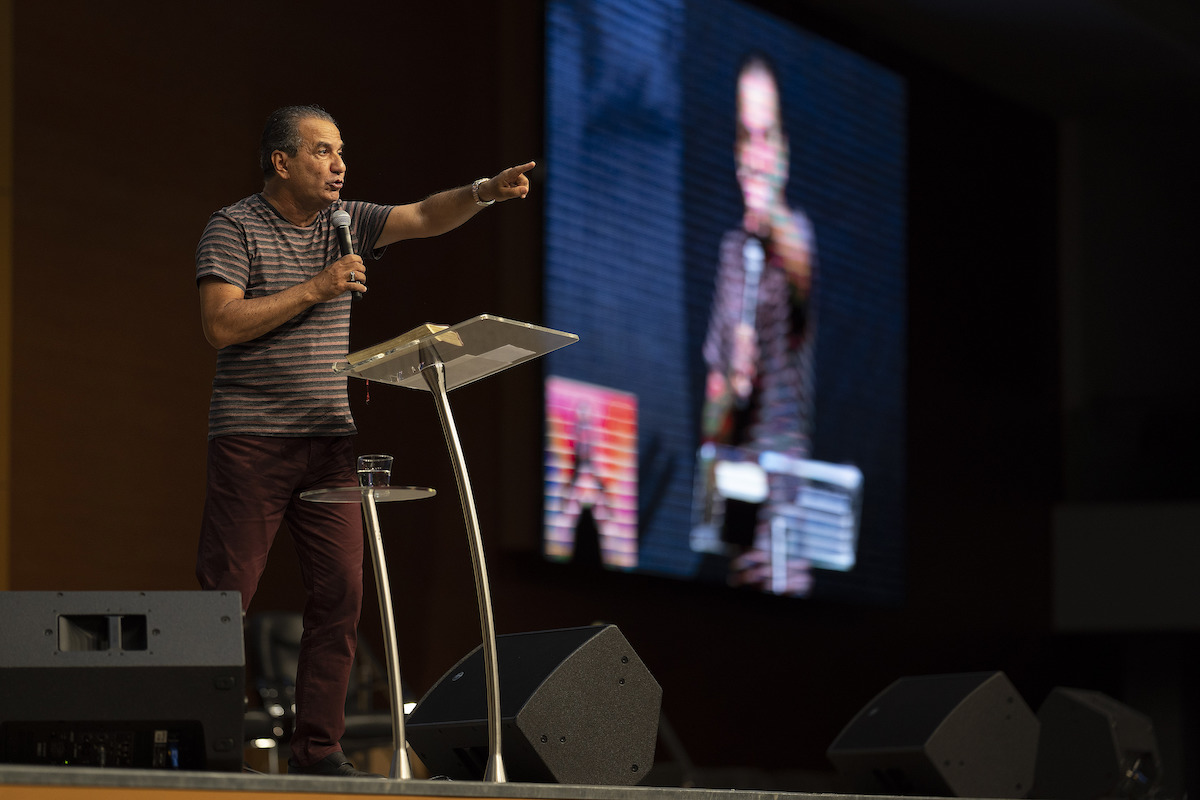 Pastor Silas Malafaia delivers a sermon during a service transmitted on live through social networks, at the empty Assembly of God Victory in Christ Church in reason to the restrictions for agglomerations due the new coronavirus, in Rio de Janeiro, Brazil, Sunday, March 29, 2020. (AP Photo/Leo Correa)

Bolsonaro, a conservative Catholic who married an evangelical in a service Malafaia administered, has zeroed in on the need to reopen the churches. “God is Brazilian,” he told people on Sunday, O Globo newspaper reported.

Some religious organizations, such as the National Conference of Brazilian Bishops, have welcomed measures in Rio and Sao Paulo, where all non-essential businesses shut down. Their leader Pope Francis warned in a letter, parts of which were published Monday, of “viral genocide” if countries prioritize economies over people.

In contrast, Malafaia and other evangelical leaders across Brazil have voiced outrage at governors’ decisions, warning they would only cooperate under court order.

“The media say thousands and thousands of people are going to die,” Malafaia said in the interview. “All these catastrophic predictions, I want to reject them.”

Malafaia argued European-style confinement measures cannot be replicated in Brazil, where millions survive in the informal sector and a day without work can mean a day without food.

On social media, some pastors downplayed health risks posed by COVID-19, claiming one cannot catch the virus inside a house of God, but could be infected at home if failing to attend services.

From March 16 to 25, Rio state prosecutors received dozens of complaints from citizens who said they had seen churches welcome parishioners even after the state imposed quarantine measures. They are looking into the complaints and could file civil suits. 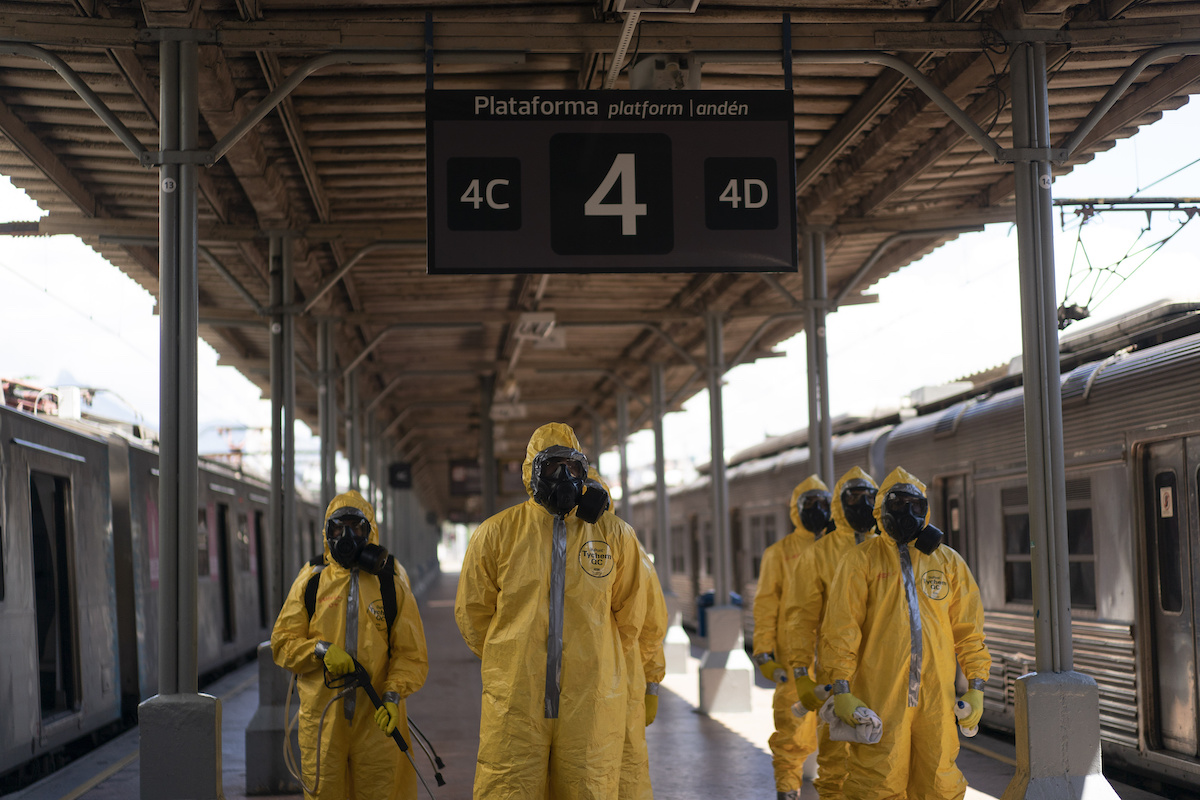 Soldiers stand in formation before disinfecting wagons for the new coronavirus at the central train station in Rio de Janeiro, Brazil, where trains connect cities within the state, Thursday, March 26, 2020. (AP Photo/Leo Correa)

“My mother is 74 and has hypertension and goes almost every day to the church that encourages even at-risk people,” read one of the anonymous complaints reviewed by the AP.

The virus is real indeed, and not sparing religious communities. The leader of a South Korean church, which claims 200,000 members, bowed in apology after receiving blame for an outbreak of infections. In France, local media reported a large evangelical gathering in Mulhouse transformed the surrounding area into the country’s largest concentration of cases. In Washington state, a Presbyterian choir rehearsal attended by 60 people, all seemingly without symptoms, apparently produced 45 infections and two deaths, the Los Angeles Times reported Sunday.

For most people, the new coronavirus causes mild or moderate symptoms, such as fever and cough that clear up in two to three weeks. For some, especially those in at-risk groups, it can cause more severe illness, including pneumonia and death.

Brazil reported 4,579 confirmed cases and 159 deaths as of Monday afternoon.

On Thursday, Bolsonaro passed a decree that added religious activities to the list of “essential services,” meaning temples could remain open even though citizens were asked to stay home. The decree was overruled by a federal court the following day. Sunday, on the streets, he again defended people getting back to work.

“Open the churches, please, we need them,” one woman begged repeatedly in one of the videos he posted to social media. He replied with reassuring words.

Analysts say Bolsonaro is addressing his electoral base. Brazil is home to the world’s largest number of Catholics—some 123 million, according to the latest census, in 2010. But evangelicals are a growing force, with 42 million believers, about 20 percent of the total population. 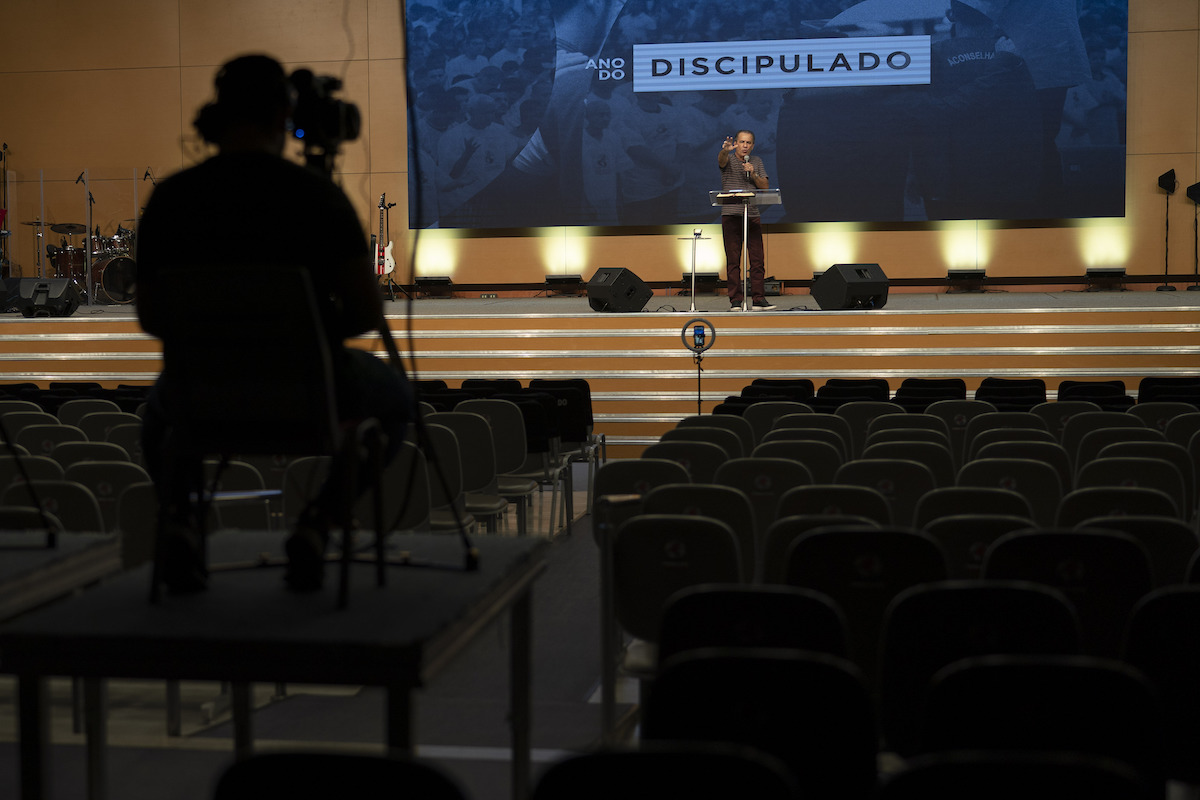 Pastor Silas Malafaia delivers a sermon transmitted live through social networks, from inside the empty Assembly of God Victory in Christ Church, amid a lockdown to help contain the spread of the new coronavirus in Rio de Janeiro, Brazil, Sunday, March 29, 2020. AP Photo/Leo Correa)

“No political party in Brazil manages to bring together as many people, in as many places, as many times a week as churches do,” said Carlos Melo, a political science professor at Insper University in Sao Paulo. “And people tend to follow the pastors’ directions.”

Growth is particularly fast among Pentecostals, and Brazil has outpaced the U.S. to become the world’s largest population, said Andrew Chesnut, a professor of religious studies at Virginia Commonwealth University.

Pastors “say that coronavirus is just a test sent by Satan and that we all just need to gather together and pray and we’ll be able to repel it,” said Chesnut. “It’s specifically evangelicals that are anti-science and it’s the same thing in the U.S. They always have been. It goes back to having a literal, fundamentalistic interpretation of the Bible.”

Rio’s governor has extended lockdown measures for another 15 days. As such, Malafaia ended his service by informing his congregation that his temple would remain closed the following Sunday.

“Lord, have mercy on our nation. Lord, illuminate our authorities, give them the direction to do the right thing,” he said. “That is what I’m praying and what I’m asking.”

He lifted his hand and shouted a blessing, as though his temple were packed as usual, but was met with no rapturous ‘hallelujahs.’ It was so silent one could hear his microphone thud lightly as he placed it upon his lectern.