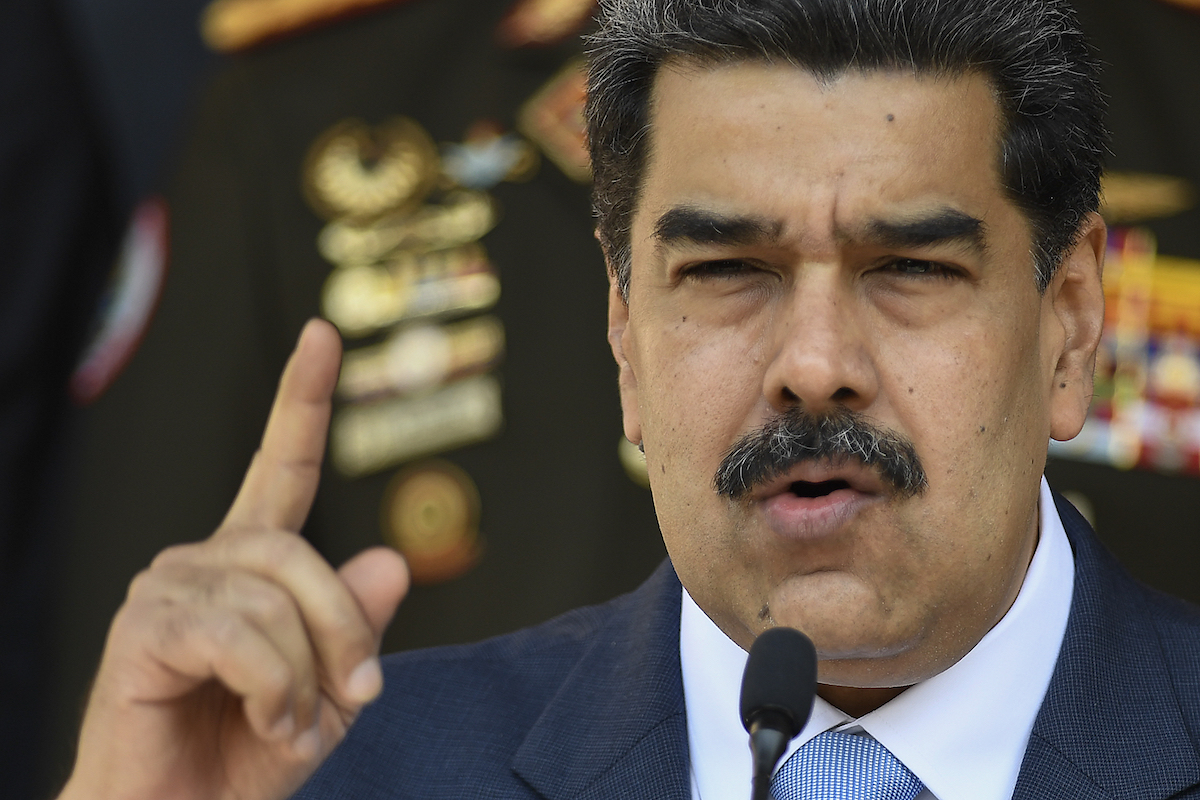 MIAMI (AP) — The Trump administration is prepared to lift crippling sanctions on Venezuela in support of a new proposal to form a transitional government requiring both Nicolás Maduro and opposition leader Juan Guaidó to step aside in favor of a five-person governing council, U.S. officials said.

The one-page “Democratic Transition Framework for Venezuela” was presented Tuesday by Secretary of State Mike Pompeo. It echoes a proposal made over the weekend by Guaidó that shows how growing concerns about the coronavirus, which threatens to overwhelm the South American country’s already collapsed health system and economy, are reviving U.S. attempts to pull the military apart from Maduro.

“This framework can provide a path that ends the suffering and opens the path to a brighter future for Venezuela,” said Pompeo in Washington.

Under the plan, both Maduro and Guaidó, who some 60 countries recognize as Venezuela’s rightful leader, would step aside and cede power to a five-member council of state to govern the country until presidential and parliamentary elections can be held within 6-12 months. The military high command —the traditional arbiter of political disputes in Venezuela and a key plank of support for Maduro— would remain in place for the duration of the transitional government.

Four of the members would be appointed by the opposition-controlled National Assembly that Guaidó heads. To draw buy-in from the ruling socialist party, a two-third majority would be required. The fifth member, who would serve as interim president until elections are held, would be named by the other council members. Neither Maduro nor Guaidó would be on the council but Pompeo said Guaidó would be free to run for president when elections are held.

“The hope is that this setup promotes the selection of people who are very broadly respected and known as people who can work with the other side,” U.S. Special Representative for Venezuela Elliott Abrams told the AP in a preview of the plan. “Even people in the regime look at this and realize Maduro has to go, but the rest of us are being treated well and fairly.”

The plan also outlines for the first time U.S. requirements for lifting sanctions against Maduro officials and the oil industry—the source of nearly all of Venezuela’s foreign income.

While those accused of grave human rights abuses and drug trafficking are not eligible for sanctions relief, individuals who are blacklisted because of the position they hold inside the Maduro government —such as members of the supreme court, electoral council and the rubber-stamp constitutional assembly— would benefit.

But for sanctions to vanish, Abrams said the council would need to be functioning and all foreign military forces —from Cuba or Russia— would need to leave the country.

“What we’re hoping is that this really intensifies a discussion inside the army, Chavismo, the ruling socialist party and the regime on how to get out of the terrible crisis they’re in,” Abrams said.

For months, the U.S. has relied on economic and diplomatic pressure to try and break the military’s support for Maduro and last week U.S. prosecutors indicted Maduro and key stakeholders —including his defense minister and head of the supreme court— on drug trafficking and money laundering charges.

Still, any power-sharing arrangement is unlikely to win Maduro’s support unless the thorny issue of his future is addressed and he’s protected from the U.S. justice system, said David Smilde, a senior fellow at the Washington Office on Latin America. While Venezuelans are protected from extradition by Hugo Chavez’s 1999 constitution, the charter could be rewritten in a transition, he said.

“It’s a little hard to see how this is going to be convincing to the major players in the government,” said David Smilde, a senior fellow at the Washington Office on Latin America. “They seem to think the military is going to step in, but that seems extremely unlikely.”

It also would require the support of Cuba, China or Russia, all of whom are key economic and political backers of Maduro. In a call Monday with Vladimir Putin, President Donald Trump reiterated that the situation in Venezuela is dire and told the Russian leader we all have an interest in seeing a democratic transition to end the ongoing crisis, according to a White House readout of the call.

The standoff between Maduro and Guaidó has only grown more tense in recent days. Maduro’s chief prosecutor on Tuesday summoned Guaidó to testify after one of the individuals indicted on drug charges said he signed a contract with the opposition leader and his American “advisers” to purchase U.S. assault rifles for a planned coup. 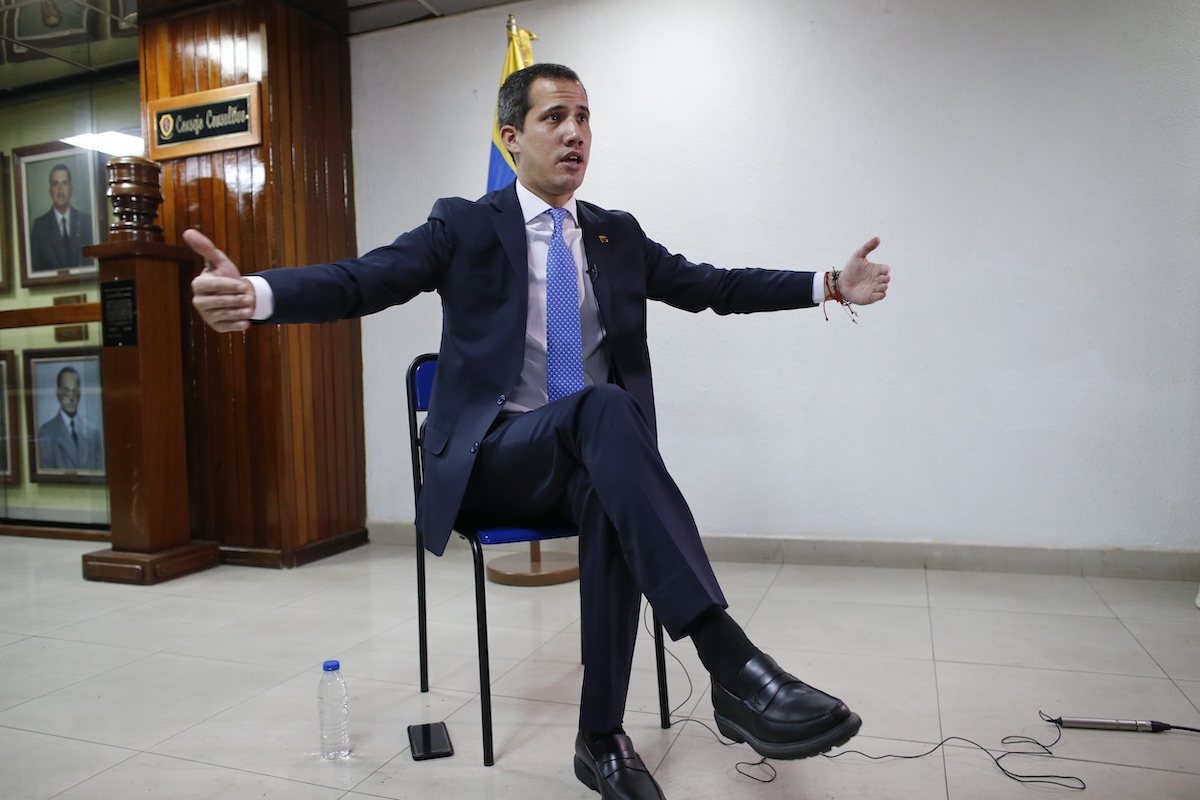 Guaidó’s team said he has never met the retired general, who subsequently surrendered to officials and was taken to the U.S. from his home in Colombia where he had lived since 2018 despite having been previously sanctioned by the U.S. for drug smuggling.

A senior administration official said Monday that the U.S. is willing to negotiate with Maduro the terms of his exit even in the wake of the indictments, which complicate his legal standing.

But recalling the history of Gen. Manuel Noriega in Panama, who was removed in a U.S. invasion after being charged himself for drug trafficking, he cautioned that his options for a deal were running out.

“History shows that those who do not cooperate with U.S. law enforcement agencies do not fare well,” the official said in a call with journalists on condition of anonymity to discuss U.S. policy. “Maduro probably regrets not taking the offer six months ago. We urge Maduro not to regret not taking it now.”

Guaidó called on Saturday for the creation of a “national emergency government.”

He said international financial institutions are prepared to support a power-sharing interim government with $1.2 billion in loans to fight the pandemic. Guaido said the loans would be used to directly assist Venezuelan families who are expected to be harmed not only by the spread of the disease but also the economic shock from a collapse in oil prices, virtually the country’s only source of hard currency.

The spread of the coronavirus threatens to overwhelm Venezuela’s already collapsed health system while depriving its crippled economy of oil revenue on which it almost exclusively depends for hard currency.

The United Nations said Venezuela could be one of the nations hit hardest by the spread of the coronavirus, designating it a country for priority attention because of a health system marked by widespread shortages of medical supplies and a lack of water and electricity.

But with the already bankrupt country running out of gasoline and seeing bouts of looting amid the coronavirus pandemic, calls have been growing for both the opposition and Maduro to set aside their bitter differences to head off a nightmare scenario.

“The regime is under greater pressure than it has ever before,” Abrams said.

AP writers Deb Riechmann and Matt Lee in Washington, and Scott Smith in Caracas, Venezuela, contributed to this report.