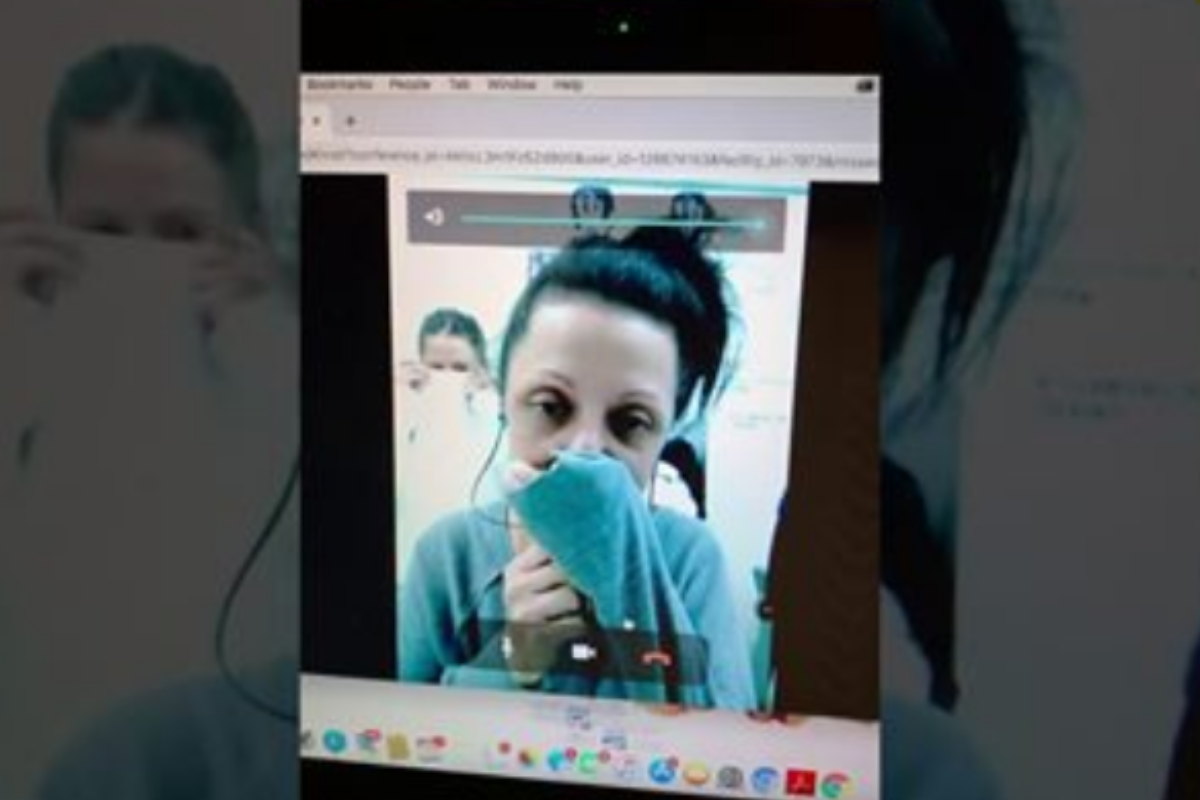 Screen grab of a YouTube video from the LaSalle Detention Facility in Jena, LA posted on March 25, 2020.

During a March 31 episode of Latino Rebels Radio, immigration attorney Mariel Villarreal said that one of her clients —a female detainee at the LaSalle Detention Facility in Jena, LA—  witnessed a GEO Group private prison officer use pepper spray or another form of gas on a group of women detainees after some of the women were asking questions about COVID-19 and detention conditions during a presentation about coronavirus. The March 31 interview happened after Mother Jones first reported on March 26 that U.S. Immigration and Customs Enforcement (ICE) confirmed the use of pepper spray on four detainees at LaSalle during a March 25 presentation about coronavirus.

According to Villarreal’s account of her client’s words (hear the clip below), pepper spray was used twice on March 25 at the LaSalle facility, including on women who were on the phone. LaSalle is a private detention facility run by the Geo Group for U.S. Immigration and Customs Enforcement (ICE).

Immediately after the March 31 podcast episode with Villarreal, Latino Rebels contacted ICE about the allegations, unaware that Mother Jones had gotten confirmation from ICE on March 26. On Wednesday afternoon, ICE spokesperson Bryan Cox, who did not acknowledge that he had already commented on the LaSalle incident, sent the following response, writing that pepper spray was used because “four persons became confrontational.”

“The facility was conducting an informational briefing on COVID-19 preparations and safety measures in a detainee housing area to ensure persons in custody have accurate, timely information about the situation,” Cox wrote at the beginning of the email. “As the statement below explains, four persons became confrontational and were sprayed after they attempted to physically force their way past staff into an unauthorized area. However, all persons in the room were subsequently medically evaluated in accordance with standard procedure.”

This is Cox’s full statement:

“ICE is tasked with providing safe and secure detention facilities for individuals in its custody. On March 25, at the LaSalle ICE Processing Center in Louisiana, a group of ICE detainees became disruptive and confrontational with facility staff in their housing area. Detainees refused to comply with directives from facility staff and four attempted to force their way out of the housing area, at which time facility staff deployed oleoresin capsicum, commonly referred to as ‘OC’ spray. Upon deployment of OC, the detainees became compliant and facility staff was able to mitigate further risk of injury to both detainees and staff. This immediate use of force was conducted consistent with agency protocol. Medical staff evaluated all individuals who came in contact with the pepper spray; no detainee or staff injuries were reported.”

ICE confirmed that there were 79 detainees in the detention area—all were medically evaluated, the agency noted. According to the Latino Rebels Radio interview with Villarreal, her client told her that the group at the presentation had about 80 women detainees. Cox’s statement did not say if pepper spray was used at least twice.

The March 26 Mother Jones story also added a draft court declaration by Villarreal based on a conversation she had with her client right after the Wednesday incident.

“[My client] informed me that during the presentation, the women had questions about the virus and were expressing fears about their safety in the detention center,” the attorney wrote in the declaration, reported by Mother Jones. “[My client] stated that the women’s questions were going unanswered and their concerns were being ignored by the officers.”

As of March 2, the LaSalle center detained 1,226 people, according to ICE.

After receiving Cox’s statement on Wednesday, Latino Rebels followed up with ICE to ask if any of the women detainees or detention personnel were tested for coronavirus. As of this posting, ICE did not respond to that request, although it did confirm receipt of the follow-up questions.

LaSalle’s most recent inspection was last September. ICE noted that LaSalle was be fully compliant with all 41 categories inspected with the agency’s 2011 Performance Based National Detention Standards, which it noted are “rigorous.”

News of the latest pepper spray incident inside an ICE detention facility during the COVID-19 outbreak follows other reports that pepper spray was also used. According to Mother Jones, the use of pepper spray at LaSalle was the third one last week inside a detention center.

There are two YouTube videos of unidentified women detainees at LaSalle. One video, dated March 25, shows women detainees talking about conditions in LaSalle and their concern about whether the detention center was prepared for a COVID-19 outbreak.

A similar video showing other women at LaSalle was posted to YouTube on March 24: