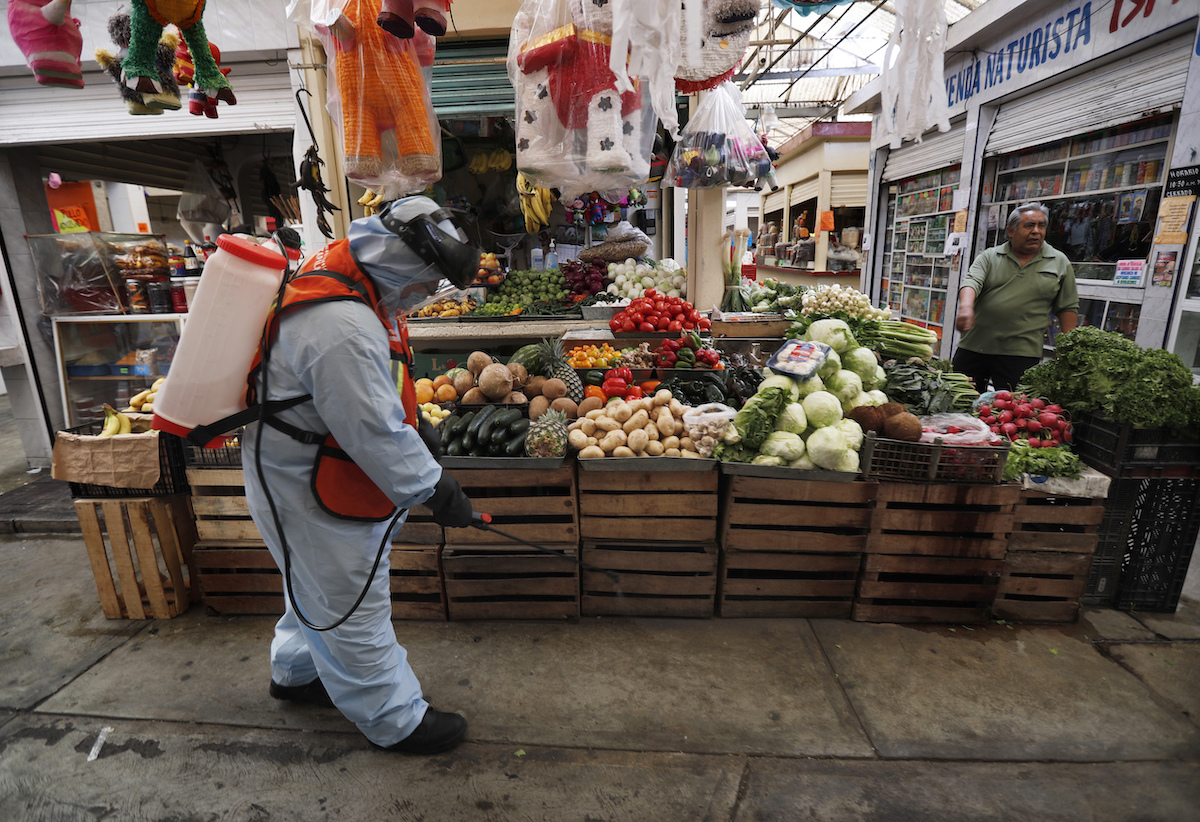 A member of a cleaning team wearing a protective mask and suit disinfects a showcase where fruit is sold, as a preventive measure against the spread of the new coronavirus, at the Iztapalapa market, in Mexico City, Thursday, April 2, 2020. (AP Photo/Marco Ugarte)

MEXICO CITY (AP) — The Mexican government is sanitizing a public hospital in a northern steel town that has become the center of a coronavirus outbreak that has sickened at least 26 members of the medical staff and killed one of its doctors.

The outbreak raised questions about the preparedness of the public health system to confront a pandemic that is just beginning to gain steam in the country.

President Andrés Manuel López Obrador said Thursday that 80 public hospitals were being converted to handle people ill with the COVID-19 disease caused by the new coroanvirus. Later he clarified that just segments of 80 hospitals were being isolated, with on average eight beds and ventilators reserved for COVID-19 patients.

“We are preparing ourselves to have the beds, the equipment that’s required,” he said. He was scheduled to visit hospitals Friday and Saturday.

Epidemiologists began retraining the staff at the hospital in Monclova, in Coahuila state, on how to handle coronavirus cases Sunday and personal protective equipment arrived at the hospital Wednesday, one day after the doctor’s death, according to Mexican health officials.

The public hospital accounts for 26 of the 39 reported cases of medical personnel from the national health system infected with the virus, Manuel Cervantes Ocampo of the public health system said Wednesday night. Three have died.

There was no immediate explanation for why personal protective equipment was only sent to the hospital this week. Mexico’s federal health officials have said they have been preparing for the virus since early January. The national health system also said the hospital’s director had been removed from his position and put into isolation because he was over age 60.

According to a statement from the Coahuila state government, everyone who works in the hospital’s emergency department is being screened for symptoms of the illness. Gov. Miguel Riquelme lamented the death of Dr. Walberto Reyes and said doctors and nurses would be brought in from other hospitals to fill gaps in Monclova.

Saul Coronado de León, a retired emergency room nurse, lifelong friend of Reyes’ wife and a former colleague of the 45-year-old doctor, said Reyes first registered a fever of 105 degrees on March 21. Three days later, he was taken to the emergency room.

The following evening Reyes was moved to the intensive care unit where he spent a week, before dying March 31.

Coronado shared an anonymous account about the days leading up to Reyes’ illness that he said was written by a colleague at the hospital and circulated on social media.

According to the account, a patient came to the emergency room March 15 with acute respiratory distress. A chest X-ray suggested “atypical pneumonia.” Once a consultation with an intensive care doctor said it was a probable COVID-19 infection, emergency room staff requested personal protection equipment, but it was not provided. Four days later the patient was placed on a ventilator. During the week the patient was in the emergency room, three shifts of medical staff were exposed to him. The patient eventually died.

Coronado said the account was confirmed to him by another member of the hospital staff.

The hospital and several other public hospitals around Mexico have seen protests by staff who said they lack the equipment and training to safely treat coronavirus patients.

On Wednesday, Coronado navigated the still unclear terrain of getting his friend buried. Reyes’ family had wanted him to be cremated, but the funeral home said health officials would not give them clearance for the cremation. Eventually, Reyes was buried, with Coronado as the only witness.

It was “pathetic,” Coronado said. The outpouring of grief on social media over Reyes’ death “is because of the kind of person Walberto was, the kind of doctor. He was a capable emergency room physician, trained.”

“This never should have happened,” Coronado said. He said the hospital’s staff are far more at risk than the general public and he blamed the public health system for not better protecting them. “This is a disaster.”

The hospital planned to move patients to other parts of the facility while the sanitizing was conducted. “Closing the hospital would be a collapse for the medical attention to our patients,” said Eduardo Robles Pérez, head of the public health system’s work risk division.

There have been 37 deaths in Mexico and more than 1,300 confirmed infections from the new coronavirus.