Ecuadorian Authorities Slow to Remove the Deceased From Homes 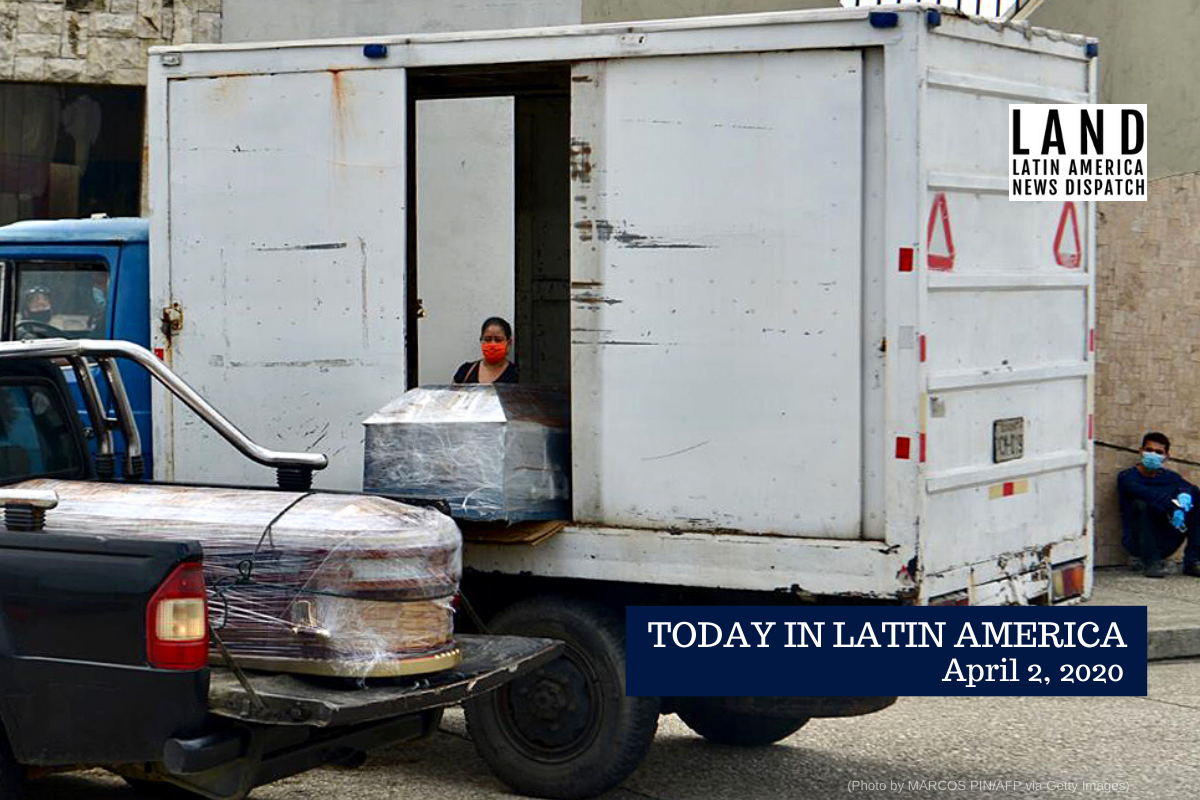 Wrapped coffins are transported into a cemetery on trucks, in Guayaquil, Ecuador on April 1, 2020. (Photo by MARCOS PIN/AFP via Getty Images)

ECUADOR: Ecuador is facing an ongoing public health crisis as medical facilities run out of space for COVID-19 victims and families are forced to store the corpses of their loved ones in their own homes. More than 100 bodies were removed from homes in the city of Guayaquil last week, but residents have still reported that they have had to leave bodies outside on public streets. Authorities responded to concerns on Monday, saying they were working to improve the collection of bodies from residents’ homes. A task force is expected to be created in order to properly collect and bury the deceased.

Ecuador has seen a rapid spike in cases of the new coronavirus, with 2,748 confirmed cases and 98 deaths as of Wednesday night, according to data collected by Johns Hopkins University. Both the country’s health and labor ministers quit last week, after Ecuador declared a state of emergency and medical professionals complained about a lack of protection.

BRAZIL: Guajajara tribesman Zezico Guajajara was murdered late Tuesday night, the fifth indigenous community leader to be killed in the last five months. Brazil’s indigenous affairs agency, federal police and the Maranhao state public security secretariat said they are looking to open an investigation. Guajajara was known for denouncing illegal logging ventures, which may have marked him as a target for logging groups. Since Nov. 2019, five Guajajara forest guardians have been targeted and killed, an escalation in recent years as President Jair Bolsonaro continues to decrease many environmental regulations in the Amazon.

CHILE: Fernando Labra Hidalgo, consul general to Argentina, died yesterday from COVID-19, the disease caused by the new coronavirus. He was hospitalized in critical condition on Tuesday. Hidalgo was one of 30 confirmed cases in Rosario, Argentina— his passing marks the 29th death in the country. Chile’s Ministry of Foreign Affairs reported that the Chilean consulate was closed until further notice. Hidalgo was 65 years old. He had more than 30 years of service in the foreign ministry and had been stationed in Argentina since 2016.

ARGENTINA: President Alberto Fernández announced a new Emergency Assistance Program for Work and Production that will postpone social security payments, provide unemployment assistance and may offer emergency health assistance for major employers and individual workers. Cabinet ministers will review the decree this week to establish specific criteria and guidelines. The program, meant to aid businesses impacted by the coronavirus outbreak, will exclude essential workers who have maintained their jobs.

PUERTO RICO: Five police stations have closed down in Puerto Rico in one week due to coronavirus scares, with 250 officers now in home quarantine. Stations are closed in the Rincón, Aguas Buenas, Moca, Caimito and San Germán municipalities amid a 7 p.m to 5 a.m. curfew in place through April 12. Dozens of officers are awaiting test results while positive cases on the island have seen a fivefold increase in one week, bringing the total of confirmed cases to 286 and 11 deaths.

HAITI: Seven factories have been granted an exemption to reopen and manufacture protective medical gear after the government closed down all of the country’s factories last month. Among the seven, four factories will switch from making cotton shirts for export to making cloth face masks for in-country use, while another three will produce hospital gowns both for export and Haitian consumption. The exemption comes after a March 19 announcement in which President Jovenel Moïse said that all Haitian factories would shut down along with all schools, ports, and airports. Haiti’s Health Ministry confirmed on Tuesday that the number of positive cases stands at 15 with no deaths reported.

EL SALVADOR: A 60-year-old woman became the country’s first coronavirus-related death, El Salvador’s Health Ministry confirmed. The woman died on March 31 after arriving in the country on March 12 from the United States and undergoing mandatory quarantine after President Nayib Bukele placed the whole country under a 21-day quarantine on March 11. There are 32 confirmed cases in El Salvador as of March 31.

GUATEMALA: The country’s government has asked the U.S. government to place a moratorium on all deportation flights headed to Guatemala. The request comes after a 29-year-old deportee who arrived in Guatemala on March 26 with 40 other deportees later fell ill and tested positive for coronavirus. Guatemala’s Foreign Ministry initially said on March 17 that the country would block all U.S. deportation flights. Two days later, Guatemalan officials announced the flights would resume. Guatemala has 39 confirmed cases and one death.

U.S.-MEXICO: Twenty-eight students from the University of Texas tested positive for coronavirus after spending spring break in Mexico. Nearly 70 people in their 20s are under investigation in Texas for possible coronavirus infection. Twenty-eight passengers from a flight that landed in Cabo San Lucas, Mexico, have tested positive for the coronavirus, according to public health officials. Four people with confirmed cases did not have any symptoms. Those who returned home in commercial flights likely widened the spread of the infection. All of the people who tested positive are currently self-isolating. The spring break trip took place from March 14 to March 19, according to a university spokesperson.

U.S.-MEXICO BORDER: A U.S.-Mexico border smuggling tunnel was discovered with $30 million worth of illegal drugs. Federal agents found 1,300 pounds of cocaine, 86 pounds of methamphetamine, 17 pounds of heroin, 3,000 pounds of marijuana and more than 2 pounds of fentanyl, according to the U.S. Immigration and Customs Enforcement. The tunnel, which runs about a half-mile from San Diego to Tijuana, has existed for months.The passageway’s entrance in Mexico was first uncovered on March 19, with agents later obtaining a search warrant for the California exit point. According to authorities, no arrests have been reported.